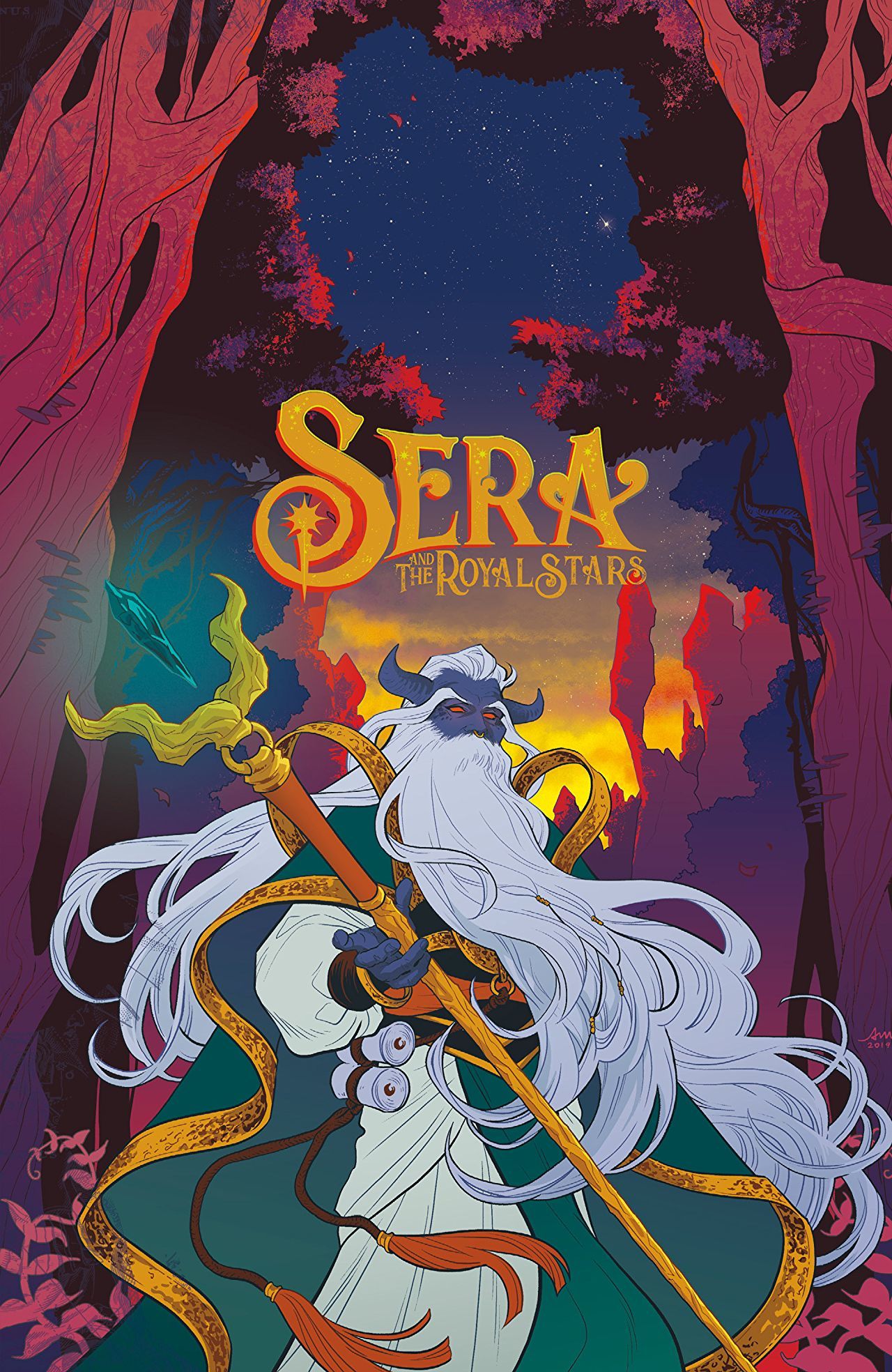 Last issue I said that Sera and the Royal Stars was something new and unique with an old school fantasy feel that is full of intrigue and heart. Also, I said that I was excited on embarking on this quest with the princess to find the fallen stars and more. Issue #2 has arrived, and I’m still hyped. This issue delivers, and I’m still in it to win it. This issue opens to Sera and Old Bull, whom we learn is the first of the constellations, the first of the stars featured on the cover in all his regalness.

Look, I knew that Sera would be on a journey to find the stars, I was not prepared to know that they would be in their humanoid (more or less) forms. I acknowledge that I don’t have a good working knowledge of deities to know who is influenced by whom, yet I can say that visually they are stunning and I know that I’ll be excited to meet each new one. (See this tweet thread by the writer on influences on the Stars, starting with The Bull.) 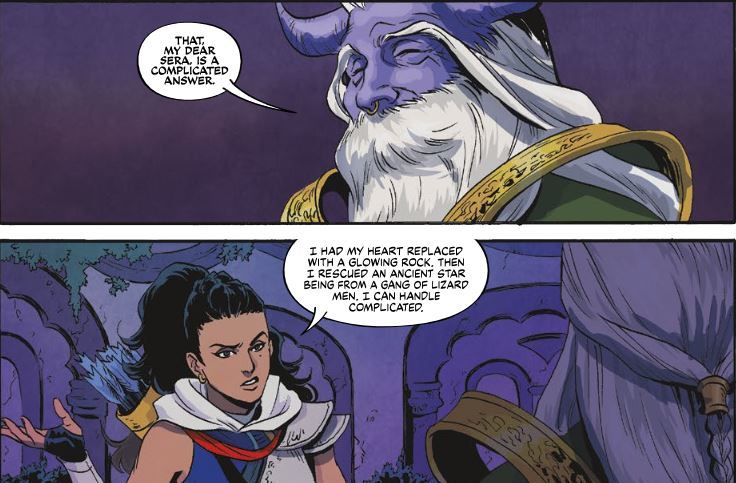 Much praise to the writing, I like that Sera’s personality shines in such moments like the one above. I want to continue to see her fleshed out as a character, and we’re getting to see who she is under the bravado, when she is holding back grief, and who she is when she is not on the battlefield. Speaking of characters, part of the other side of the conflict who aren’t supposed to be good guys but the villains in this tale, are related to Sera and her family: the usurper to the throne is her dear uncle. His son, a snobby dude around Sera’s age, is heir to the throne in this situation, and he’s a piece of work who doesn’t respect his elders (strike one) and he’s overall annoying to be around (strike two). Tied into this family drama is Sera’s very missing mother which I hate as its tied to the dead mom trope that permeates so much of fiction, especially the fantasy genre. Here’s hoping she’s not dead! (In the grand scheme, it was implied that she’s missing, yet I hope this is at least elaborated on as we read on.) Back to the baddies, there’s someone possibly even more evil in the background who just may not be human who we first saw observing Sera on the battlefield in the first issue. Along with these baddies comes monsters; creatures who don’t wish any one well, especially Sera. 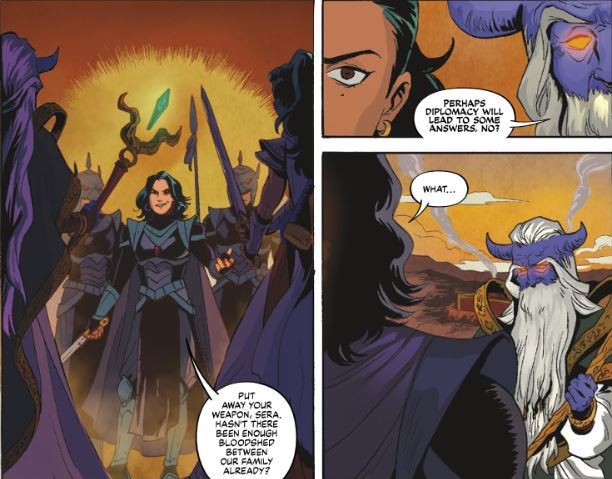 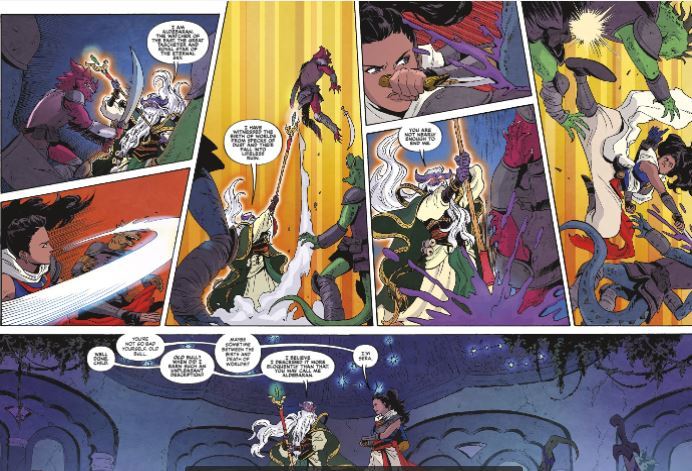 In regards to the art making side of the creative team, opening up this issue is once again a treat. The action scenes are artfully done, and there’s enough attention to detail in the paneling, lettering, and coloring. It’s superbly done. Action sequences don’t miss motion or panels, and the direction dips into more serious or light-hearted scenes just as quickly as the fighting starts. The screenshot of action displayed above this paragraph is only five pages in, so you know it’s a blast just starting this issue. I especially love the cosmic plane of existence that Sera and otherworldly beings travel to (you know the place where she first had her vision of what’s to come and also had her heart taken and replaced by the goddess Mitra). It’s hinted that others have access to this place when a set of eyes menacingly appear and tips our heroine off that something ain’t right. Towards the end, a certain garden that appears, a miracle of the stars, is another visual cornucopia of many by the creative team.

What I like about Sera and the Royal Stars the most so far is the care and handling that I see by the creative team in adding emotional depth into this series that I certainly feel. Sera, duty bound, is tied down by much, yet she’s ferociously protective of her people without trying and her moral compass is starting to make itself known. A good example of this is following the trail of her relationship with her family by looking at the panels with the figs and who gives them to her. At the end of this issue, the magical garden brings up a childhood memory that is heartbreaking with the new context of who isn’t there to see her off on her journey, instead continuing with a new member, with another Star, as she works to rebuild the night sky. Oh, and as a lasting thought, the new Star is dramatic as all hell with her timing. She dropped the best bars of this issue, and I stan.

Are you excited for Sera and the Royal Stars #2, out on Aug. 28? Me too, so here are some clues about what’s coming up!