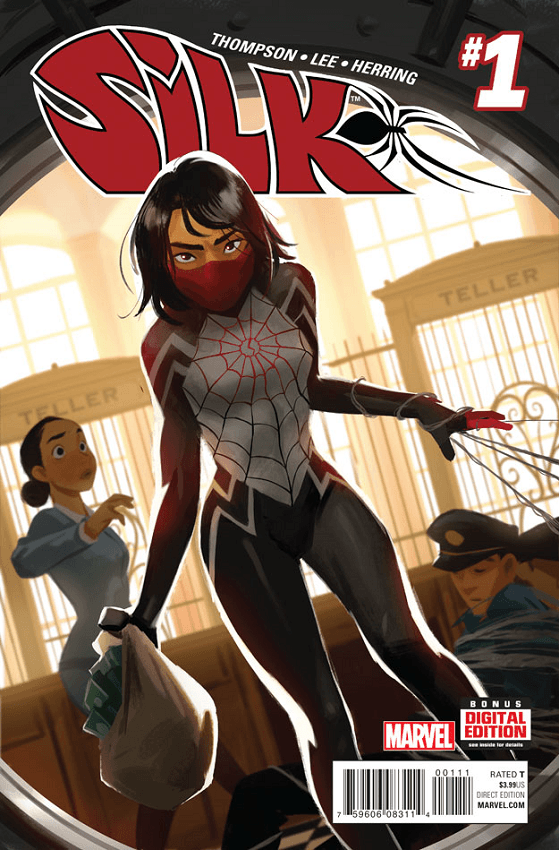 [divider type=”space_thin”]
Let’s quickly rehash the basics: an Asian American woman named Cindy Moon was locked in a bunker for ten years and has to learn to navigate her spider powers while solving the mystery of what happened to her family. Sounds awesome, right?  In fact, with the announcement of Cindy Moon/Silk’s shocking change from superhero newbie to supervillian extraordinaire, that awesome level got significantly boosted. Peter Parker’s former lover becomes a kickass spider lady on the dark side? I can’t lie, even I was hype to see how this transformation would occur. Reading the book itself, though, you’d think the creators would’ve forgotten that little tidbit seeing as how for the first half of the book we get more information on Cindy’s daily life than her decision to defect. And here’s where the main problem continues to show up. 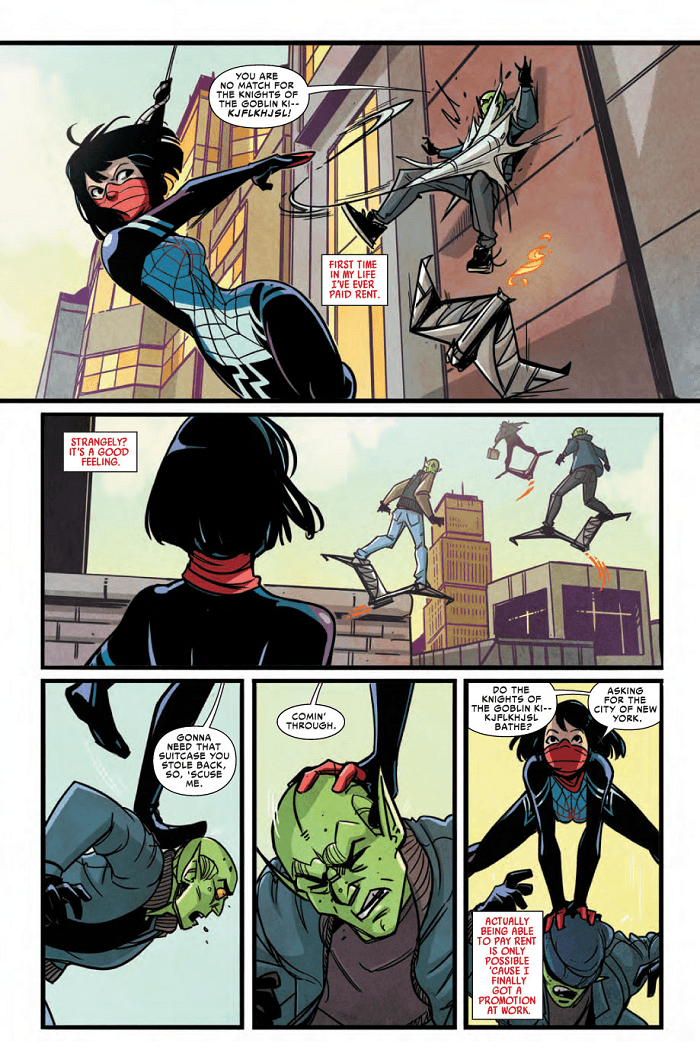 Despite a strong original backstory and a relatively fresh character most of this comic’s written work is just chunks of Silk’s awkward narration mercifully interrupted by some passable dialogue. With the same forced pop culture references and dated jargon (including use of the word “rad” no less than four occasions) as in her previous debut, however, it’s no wonder every joke falls painfully flat. It’s hard to get a sense of who Silk is as a character, too. Is she the intense, serious person determined to do whatever it takes (including working with some notoriously shady characters) to find out what happened to her brother? Is she the perky, cute persona both in her office life and in costume casually chucking out one liners? Rather than dynamic, these conflicting moments come across as confused and occasionally, dare I say it, Mary Sueish. 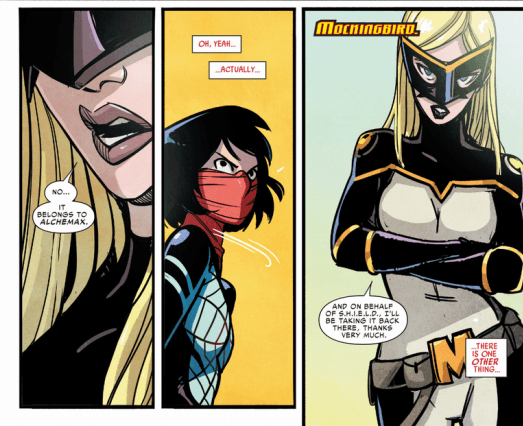 [divider type=”space_thin”]
Stacey Lee’s artwork, on the other hand, remains a visual joy from page to page. Whether it’s thrilling fighting scenes with the Goblin King’s knights, hand-to-hand combat with Mockingbird, or the drudgery of meeting work deadlines, Lee’s characters are expressive and compelling, pairing brilliantly with colorist Ian Herring’s soft palette. If you’re a fan of a certain famous magical girl series there’s even a few fun Easter eggs scattered in the background that make every panel worth looking at. To cap it all off, Helen Chen’s cover (seen at the top) complements Lee’s slinky and smooth line-art by giving Silk a strong presence, yet a visually appealing atmosphere.

Ultimately, what for some people may feel like Silk’s obnoxious immaturity could be lighthearted fun for others, and the enjoyable artwork does a great job of making up for the writing’s shortcomings. Since the plot finally picks up in the second half it’ll be the ending’s big reveal that helps readers decide to stick it out with this series or not, so you might just have to pick it up for yourself to decide.

7.5 Outdated Pop Culture References out of 10