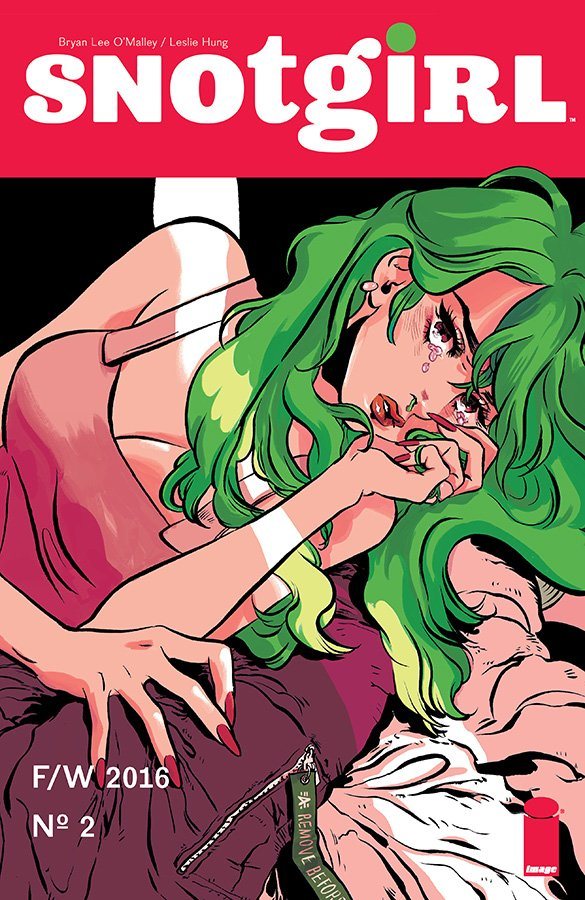 I want to like this comic more than I do. When I began Snotgirl I was looking for an indie that took a seemingly shallow person, with a seemingly shallow life, and looked closer to reveal a depth that we write off because we often prove to be shallow ourselves. I was hoping to find a character in Lottie who was meant to be unlikable but who actually proved to be easy to empathize with once you take the time to get to know her – similar, often, to those in real life who, if we’re honest with ourselves, we never gave an honest chance. I was looking to love this comic and find insight into a world I admittedly avoid as materialistic and fundamentally different from the type of person I am. Unfortunately, Snotgirl is not that comic for me yet.

A twist ending bought us in after issue #1, which was one of the few parts of Snotgirl I found myself actually interested in after the initial intrigue of the series wore off. It was trippy, and could lend itself to a mystical issue #2 that played with reality and turned Snotgirl in a direction that few of us would have seen coming. It does that in issue #2 – partly – but not before falling into the mistakes that made the series premiere disappointing: an unlikable character with unlikable friends in an unlikable culture that has yet to show its charm.

The plot doesn’t thicken in issue #2, but rather stews in the same tenor of issue #1 with minimal plot development and moderate character development of Lottie, her “friend” Cutegirl, and their acquaintanceship. The best part of Snotgirl continues to be the artwork by Leslie Hung, and the beautiful, bright colors by Mickey Quinn. The panels have the same level of creative layouts that made issue #1 stand out visually, and without as many conflicting text bubbles and fonts that could have been overly distracting. Visually, the artistic team really captures the tone of an LA fashion blogger hiding her insecurities as she steers through social hijinks.

New promise comes through the introduction of a new character, Detective John Cho (no relation), who has an interesting, creative backstory that does for the comic what should have been done with Lottie. We could have easily seen Cho for what he seemed in his fancy suit and fawning women, but we quickly shook that off and were given more. That has to be coming in the future for Lottie – it has to be coming in the future for this comic – and hope it begins soon for Snotgirl to begin inching towards its potential.