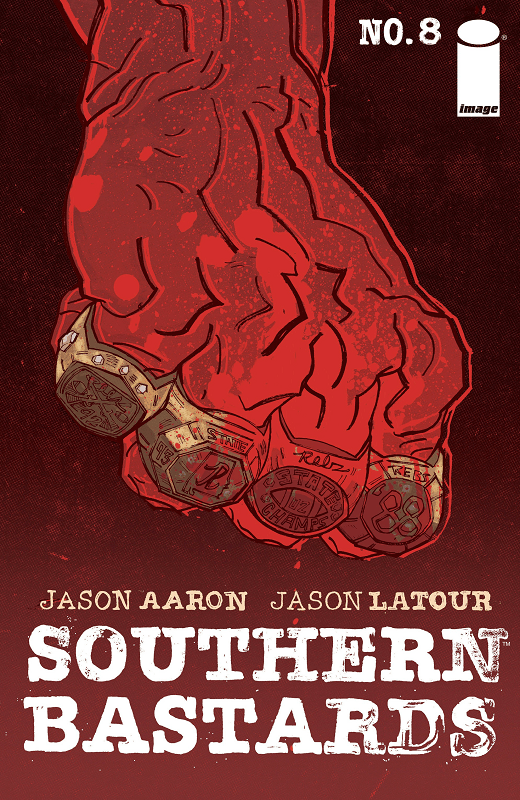 “You know what I always say Big, it’s football, it’s worth the blood.”

Remember when I said last time that Southern Bastards is one of the best comic books on the shelf? Well, my opinion hasn’t changed much. This book is still an efficient, surprising and foreboding master class in storytelling. It’s amazing to think how much ground the amazing Jasons have covered in just 8 issues, but so much has happened, both in forward momentum and in-depth backstory, it feels like it’s been 20 issues. There is actually a lot more ground than usual being covered in this specific issue. After spending some time with not-yet-Coach Boss as a teenager and high school football player, this issue plays with two distinct time lines. The first being Boss as a young adult, a year removed from high school and still unsatisfied with being the ball boy with much larger ambitions. The second being more of a chronological sequel to issue #5 that dealt with the death of Earl. Things have gotten more complicated for Boss, not to mention that Earl’s daughter might be coming home and that could be uncomfortable for EVERYONE.

As always, Latour is on point here, even as he’s tasked with some different iterations than what we’ve seen previously. Mainly, depicting Boss as a young man for most of the book. This will never be a particularly chatty book, but there was more dialogue in this issue than most and Latour still handled the panels very well.

After months of backstory to empathize with, we finally got to see Coach Boss begin to evolve into a super-villain of sorts. But even that has big consequences, immediate and on the horizon.