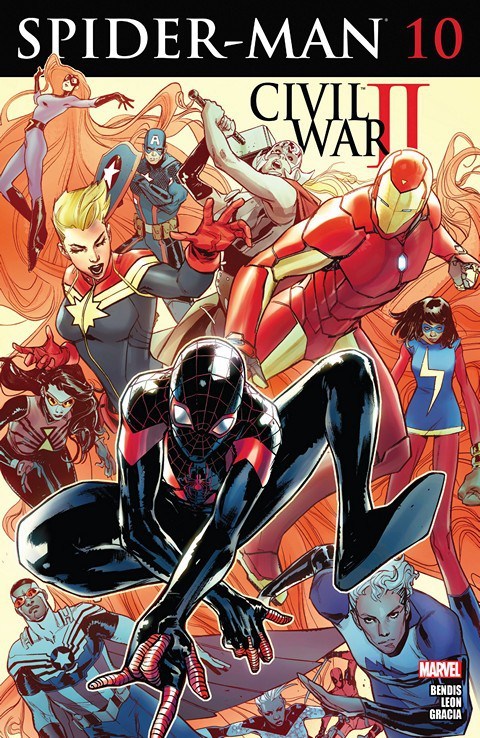 Civil War II, the event that just won’t stop. Yeah, We got Miles and Company crossing over into Civil War II and rightfully so since Miles has a huge role in the final curtain call of this event. We know what will happen, just not how it happens or why it happens. Bendis pieces that together for us from Miles’ perspective as he has Miles back home and recounting the events that transpired in DC between him and Captain America. There is a lot to unpack from this as we get a more grounded view from Miles and it gives insight to a lot of the major players in this event as well. Those players being of course Carol Danvers and Tony Stark AKA Captain Marvel and Iron Man.

We get Miles on the steps of the Capitol, and he’s greeted by an army of officers with guns on’em. Miles is nervous, but this does come with the job of being Spider-Man, as he tells Ganke. Bendis also has him inject the fear of that many police and guns on him and recounts not knowing what to do and the fear of seeing viral traffic stops (supposing that ended badly and a reference to officers killing unarmed Black women and men). This probably stood out the most to me during the issue more than anything else because police have been shooting unarmed Black folk … I was going to say more recently but what I really mean is fucking forever. The cops aren’t aware Miles is Black due to the costume and the mask but it’s such a thin veil because he’s still treated as a threat. 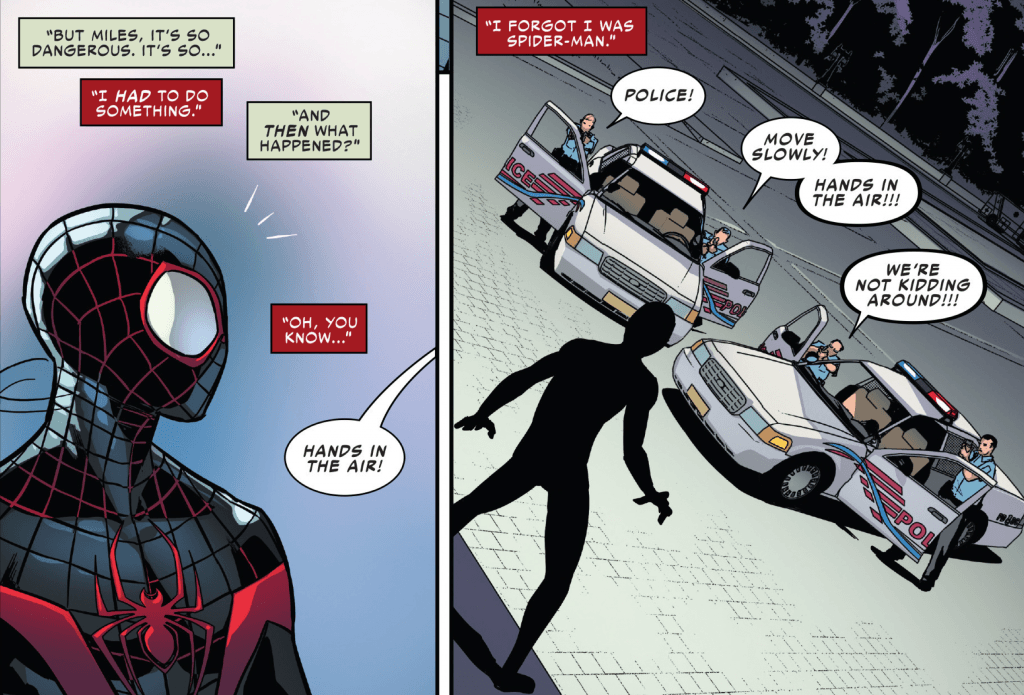 Miles is only rescued from this once Captain Marvel steps in over their comms. Captain America appears and Miles assures him he isn’t going to kill him. Captain Marvel appears and invites Miles into her custody but as soon as she doesn’t get the answer she likes she grabs for Miles, which sets the curtain call for Civil War II as Tony Stark appears (having placed a protective force field around Miles). We saw this occur in Civil War II, Issue #7. However, the fall-out from what Miles is seeing is a huge motivating factor in his character development, as he is now not only recounting what happened to Ganke and Fabio but Ms. Marvel as well. Bendis displays the weight of this great power upon Miles as he informs every one of his uncle’s criminal background and his father’s past of being (as far as he knows) just as bad as his uncle and the worry of what this means for him.

This is an issue that is mostly dialogue but provides a lot more than just a recap. We not only see how although Captain Marvel doesn’t want to be the “bad guy” in this situation… she clearly is (which feels real out of character but don’t mind me) and Ms. Marvel’s disappointment / disdain in hearing that from her idol. Nico Leon does a great job of making these dialogues really feel visually as if you are a character in the room listening to Miles tell a story. There’s a character telling a story and you reading it as a reader, then there’s your friend telling a story and you being emotionally invested. We are all Ganke listening to Miles and trying to guess what is coming next. That’s superb visuals from Nico on that aspect.

This has been one of the better issues of Spider-Man if only for the ending that’s a curve ball but also the final page of the series and how much of a “awwwwww shiiiit” moment it provides. I’m hoping we can maintain this pace throughout the series.