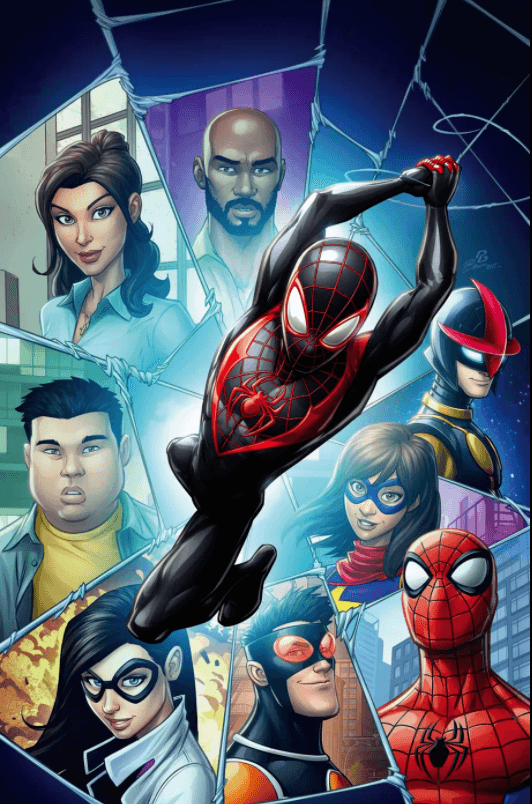 It’s safe to say that things have escalated rather quickly for Miles. Happenstance brings Miles into the premier criminal underworld of Japan and in contact with Tomoe. Y’all may remember her as a new Iron Man / Iron Heart villain that appeared last year. Miles is being put under the microscope by Tomoe and it’s a flashback to some wise words from Uncle Aaron that puts Miles in the right state of mind. Listen, this flashback may easily be the best thing about this issue. We haven’t seen Unc’ in a while (unless we’re counting Donald Glover in Spider-Man: Homecoming). This was a great callback to Aaron’s relationship with Miles and showing us a different side of the villain we knew he’d become.

I can’t say I’m too stoked about Miles suddenly being in Japan now. I’m a bit conflicted as this feels like a quick anime filler episode within an actual episode, however, so many cool things occur in this issue. The flashbacks to Uncle Aaron give way to an incredible homage to a certain action star. Miles (to me) shows he may not be cut out for the spy life as his father is way more up to speed on certain things (like how a tuxedo left for you by some rando stranger is obviously bugged). If we saw Miles’ stay in Japan as more drawn out and him actually leading a double life in an underground criminal world, then we’d be talking. 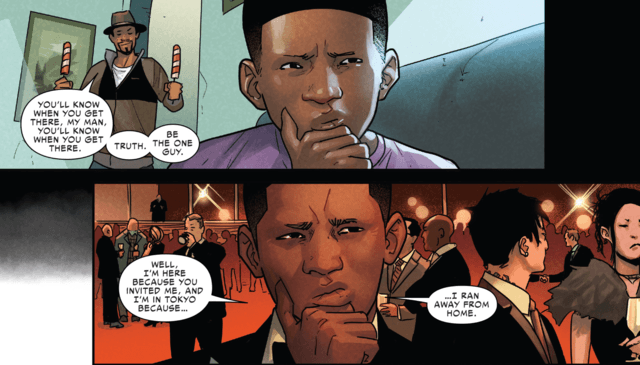 This issue felt more like a teaser to Miles’ much-needed escape. The quick resolution of the issue and certain reveals come way out of left field. I don’t think any of us could see where this series is going or what lies ahead by the end of the book. I gotta talk about Nico Leon making this a worthwhile trip visually. I mean, the action scenes alone? Perfection. But the juxtaposition of the fight scene mashed up with the flashback is brilliant storytelling. Which is what makes me so conflicted, there are so many cool moments that Bendis and Leon make possible here. There are just some decisions I need Miles to do better on… also the mask issue. Dude, why does this guy always… get that shit torn or– I’ve never seen a Spider-Man with his identity revealed more than Miles Morales. I’m just saying. I’ma stop. This Tokyo adventure was quick and had a bunch of cool moments, but does it add more depth to Miles? That’s a Kanye shoulder shrug for you to decide.