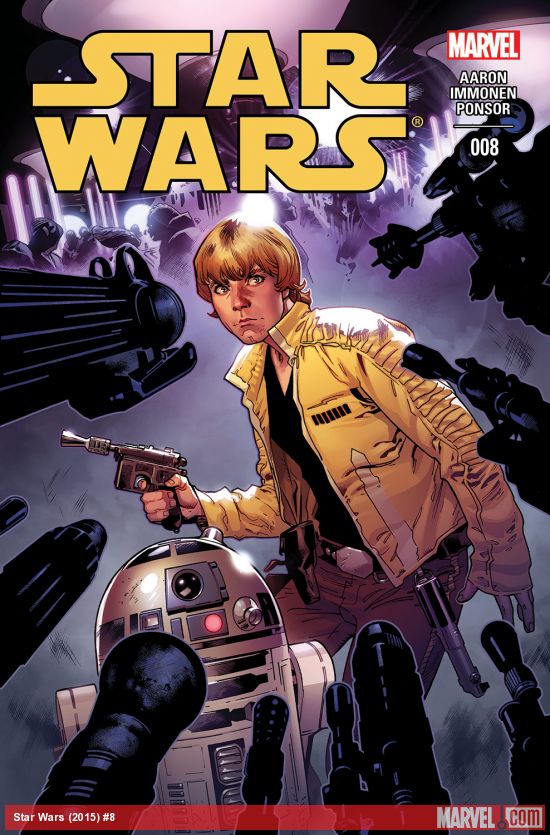 So, I may have been wrong in an earlier review when I said Star Wars was one of the best book in Marvel‘s SW line. This is one of the best books in Marvel‘s entire arsenal. Whether it’s SW or Thor mythos, Jason Aaron is ridiculously adept at creating a unique yet familiar voice for your favorite character while carving out fresh aspects of existing lore. And the latest story arc in the flagship book for the SW universe is no exception.

Issue 8 picks up with everyone’s favorite dashing rogue, Han Solo caught in a compromising situation on a remote planet with Princess Leia….and his estranged wife, Sana. As it turns out, even the greatest space pirate ever in the history of geekdom gets weak in the knees over #BlackGirlMagic. Let me just say that this results in one of most hilarious exchanges of the series thus far.

Meanwhile, Luke continues on a soul searching tour of the galaxy that finds him, as usual, neck deep in the maximum amount of trouble. Once again, Aaron masterfully introduces fresh blood into the Star Wars universe while still giving us the most of what we love about these time honored icons (especially the part where Luke never quite knows what the hell he’s doing).

The real highlight of this installment is that it welcomes Stuart Immonen’s artwork to the fold and, as usual, he does not disappoint. Opening a comic to find a detailed, beautifully rendered Star Destroyer is one of those things that makes reading comics totally worthwhile. The moments of exposition aren’t quite as tightly penciled as the action beats. However, the action beats and the luscious color palette totally make up for it.

Bottom Line: Whether you’re a Star Wars fan or have never seen a single movie in your life, this is one of those titles that represents the best Marvel has to offer right now.

9 Intergalactic Alimony Checks out of 10