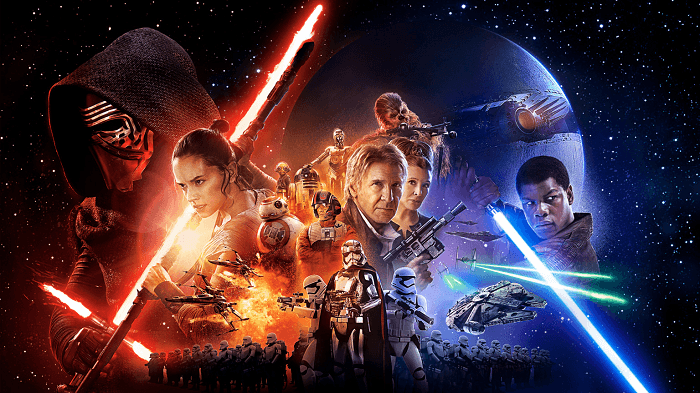 I remember hearing before I went to see X-Men: Days of Future Past that the movie “fixed” the original trilogy by not only putting the franchise back on a quality track, but by also resetting the timeline. That, to me, was then and is still now, bullshit. I was in the minority of my peers that felt that Future Past was, ya know, good and the fact that we know what happened before and lived through a terrible X-Men: Last Stand where people died that shouldn’t have died or the fact that Wolverine remembers that, wasn’t cured by a C+ effort either. Well, because of the nature of the prequels and when they were released, Star Wars didn’t have a continuity problem, but it did have the burden of putting the franchise back on track after the much watched, and even more lamented, prequels. J.J. Abrams wants to say, “You’re welcome.”

The previously mentioned timeline works in favor of The Force Awakens. Instead of sequels being the last movies we saw from Star Wars, this is a direct sequel to Return of the Jedi and it certainly feels that way. Instead of allusions to your favorite Star Wars characters, they are actually there. The X-Wing fighters and Imperial Shuttle among other hallmarks are there to cast nostalgia for both old school and new Star Wars fans alike. That really is the magic of this Star Wars film. Somehow, they have been able to serve both masters (which I imagine will amount to insane box office numbers and a high rate of repeat viewings). There are plenty of homages to the most memorable moments of the original trilogy, but the new characters are updates to the series more than anything else. Much was made about the new leads of the Star Wars film (and possibly the forward movement of the franchise) as they look pretty different than the previous leads of Star Wars films. As in not necessarily White men. Daisy Ridley as Rey and John Boyega as Finn carry most of the emotional weight of the film and a lot is riding on their shoulders. They carry it admirably by both filling their roles to great effect and not distracting from the overall Star Wars mythology.

Even while Rey is more understated and Finn is more vocal and robust, the chemistry of the two works incredibly well on screen while they also hold their own with heavyweight actors filling roles as Star Wars royalty. The performance most will come away surprised about is Adam Driver’s as Kylo Ren. No spoilers about his origin or motivations, but this might be the most nuanced character of the Dark Side that the movies have produced. Because Hayden Christensen’s performance was so terrible in the prequels, then sadly, Anakin’s transformation does not count. You may only know Adam Driver from the show Girls and admittedly, your enjoyment of that will probably determine your enjoyment of him as an actor. In The Force Awakens, however, he fills in as the somewhat Big Bad (There are always two. Never more, never less.) of the film without being unrelatable or cartoonish.

That brings up another point about the film I enjoyed. They have some good, spontaneous moments of humor, but the film is devoid of the corniness or outright weirdness that Lucas often wove into the films. There’s a scene where our characters walk into a cantina with many of the familiar characters to the original trilogy, but there’s no dance number, no Jar Jar or even Ewoks. Maybe the quirkiness of those original films will be missed by some, but hey, you still got droids.

What crystallizes the film, especially for veterans of the Star Wars franchise is the sense of history and consequence from the last film in the storyline. As shown in the trailer, the Imperial Star Destroyer lays demolished and there are other remnants of the past sprinkled throughout the landscape and film. The tone and color palette of the film takes you back to Return of the Jedi and the actual feel of cold, vast space compared to the prequels that often felt like a pop song video.

No self-respecting Star Wars fan is going to say that The Force Awakens is as good as The Empire Strikes Back, but it’s closer than many will want to admit. The film ties together established and new themes alike while infusing the franchise with new and energetic talent. You’ll want to brush up on the trilogy to build a good appreciation for this sequel, but it is one of the most enjoyable films of the year even if you go into it cold.