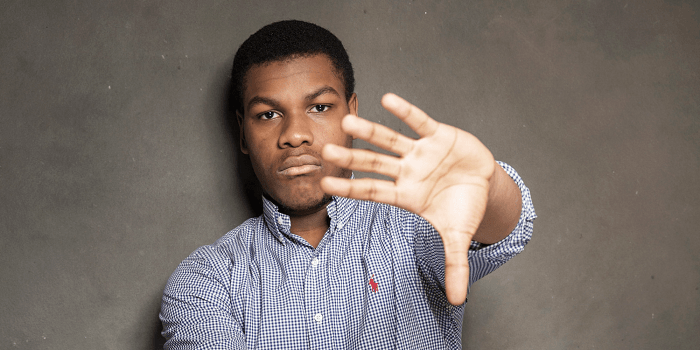 Be forewarned, you’ve heard this type of testimony about representation before. You’ve heard it done better and you’ve even heard it from me personally. But this — feels different. Ever since John Boyega was announced for the Star Wars sequel, it felt encouraging that a young Black actor was being initiated into the Star Wars universe. When it became evident that Boyega was not only in the film but had a major role and was sharing the lead roles for the film, I was left a little out of sorts. I was happy when it was announced that Boyega, Lupita Nyong’o (we didn’t know it was only going to be motion cap and voice for her, but whatever) and others but, I hadn’t considered the idea that they might be headlining. Headlining a Star Wars film with a woman co-star. The most popular American Sci-Fi Franchise in history. In the words of Marlo Stanfield, “Don’t seem possible.”

And yet, here we were, in the first trailer, the first person we see is a panicked and exasperated Boyega populating the screen in a storm trooper uniform. Again, this took me aback. Was this a ploy? Was this really happening? Was the Star Wars franchise really about to bank its millennial future on a 23 year old Black boy from Peckham, London?

I’m a big Star Wars fan. I’m not winning any nerd offs on Star Wars trivia, but I can run down Phantom Menace to The Return of Jedi to a noob if I’m armed with a free afternoon and a lot of patience. I wasn’t old enough to see the original Trilogy in the theaters, but always had some form of them at home. I saw the prequels in the theater. Even then, I didn’t have the abstract thought of representation in the media I was constantly consuming. If all the heroes I had to pick from were almost always cis, hetero White men, well, that’s just the way it was. I was pretty young and my fangs hadn’t come in yet.

While there hasn’t been much diversity in Star Wars Films previous to now, that isn’t to say that Black people haven’t been in those films at all or even in important roles. Even people that don’t follow Star Wars know that Billy Dee Williams was the dude that betrayed the most likable character in the original trilogy (he says he still gets people mad at him on the street for that). Even if you never fantasized swinging a lightsaber, you know that Samuel L Jackson made it through 2 ½ of the prequels.

But, Boyega is different. Both Williams and Jackson were older, established actors. More plainly, White America had become pretty familiar and comfortable with them. I’ve written about actors such as Jackson or Dwayne Johnson or Will Smith before; they have been in the White consciousness for so long, that no one gives a shit if they slide into traditionally White spaces. But John Boyega doesn’t fit that description. Relatively unknown or known almost exclusively through a cult British Alien invader flick. Boyega is young, talented, charismatic and unapologetically black. The movie doesn’t come out for over a month and already, I identify with him more than any Star Wars character that’s ever existed in a film (outside of Darth Maul perhaps, because…it’s fuckin’ Darth Maul).

Representation is a harder conversation than we are willing to admit sometimes. When you are young , you begin to balance what you might have been told you can be (hopefully anything) compared to what you see people like you being (a much smaller range). And while the country at large moves more to the left on social issues and acceptances, smaller communities such as nerds fandoms are slower to move because of how insulated they are. We’ve had a Black President for over 7 years now and I still didn’t think I would see a Black lead in a Star Wars major release. That’s absurd. But that doesn’t make it unfounded. What’s more, Boyega didn’t have to play a slave to get his big shot. He didn’t have to be shot 26 times by a conflicted White cop because he was a low level dealer in some crime drama (I mean, he played a hood in Attack the Block, but he was unquestionably the hero of that film, so work with me). Basically, he did good work, got noticed and someone saw his talent and took a chance on him without him and he didn’t have to spend 25 years making White folks comfortable with him. You know…like Mark Hamill’s level of popularity when he was cast in the mid ’70s.

Something, hopeful, even more hopeful than the Finn action figure I bought, is that my daughter may grow up with about 80% less representation issues than my generation did. Her first big obsession was Doc McStuffins. Dora the Explorer stays in heavy rotation in the Evans household. She gravitates towards minority characters no matter who we put in front of her. She likes Korra over Aang. Her Storm shirt is one of her favorites. Because one can only hope that the needle towards a more equal representation will continue to move in this direction, she may never have my elation of a Black person starring in one of her favorite franchises because, hopefully, it will be old hat by then. I mean, she is the first generation born under a Black president.

But that 8 inch tall Finn action figure I just picked up? Naw, she can’t play with that. That joint is on the top shelf of my collector bookcase looking over me until that Force drops. 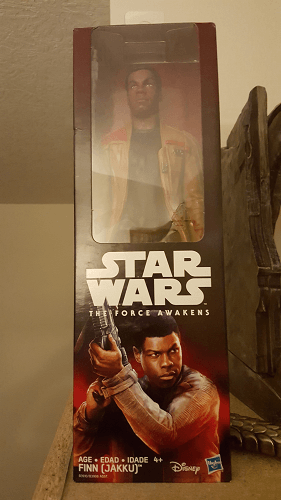