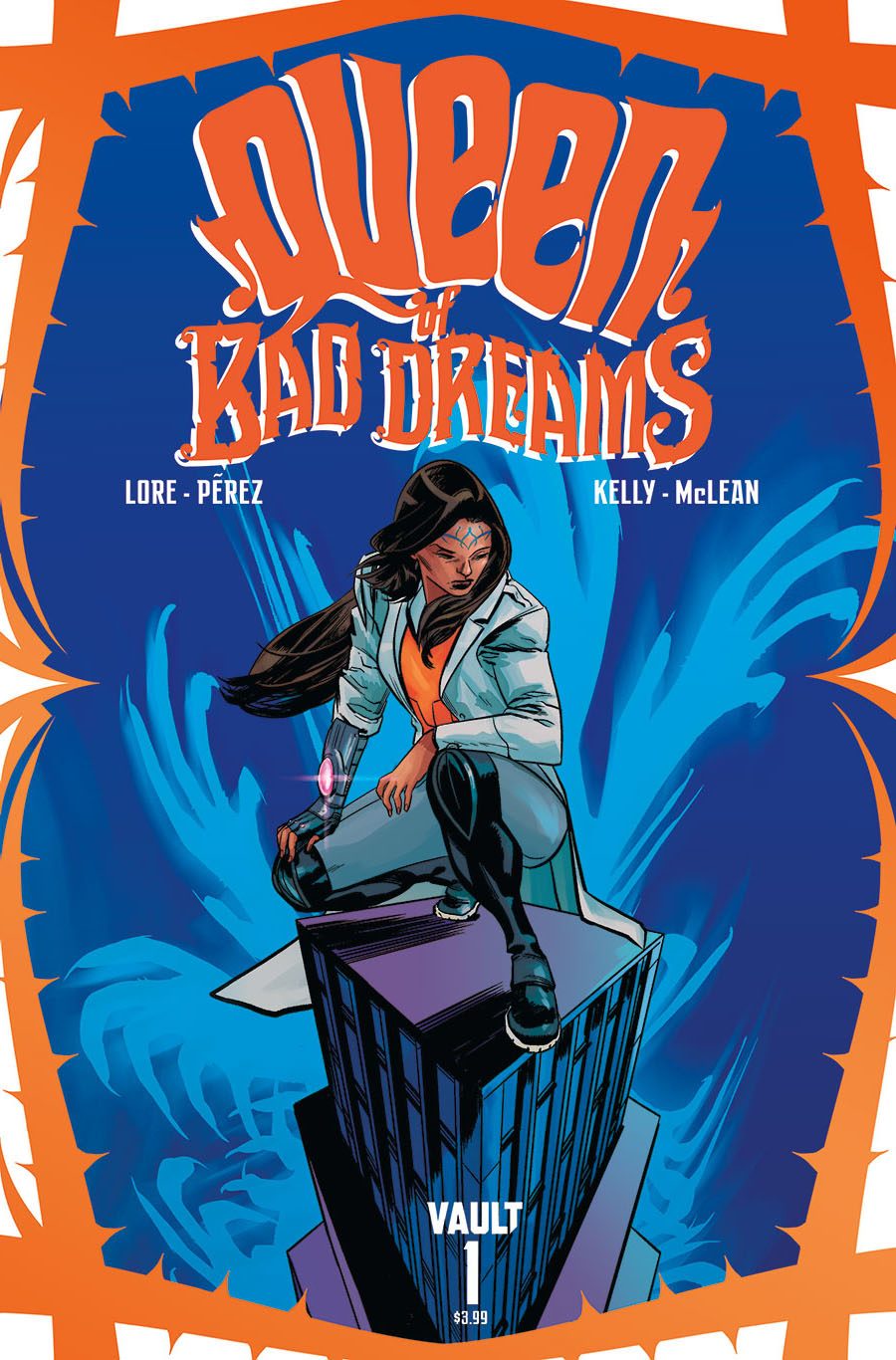 I read that the elevator pitch for Queen of Bad Dreams was “The Sandman meets Blade Runner”. Beyond that, the narrative would center a female main character among Brown and Black women, queer women and also non-binary folks.

What if dreams broke through into reality?

By the end of the first issue, I began to have a better understanding of the structure of this world and its rules. Here, dreams are powerful to a degree that fragments of figments of can escape to have their own autonomy. What does this mean? A person can dream up things, persons, and creatures capable of escaping into the real world Those who do make a scene, wreak havoc, and ultimately end up in the crosshairs of an “Inspector Judge”. Enter Daher, a woman who is a veteran IJ.

She’s a highly skilled person who knows how to track these figments. Once caught, Daher has the authority to either ‘reinsert’ the figment into the dream world, or grant them agency in our world. So she sounds legit, right? 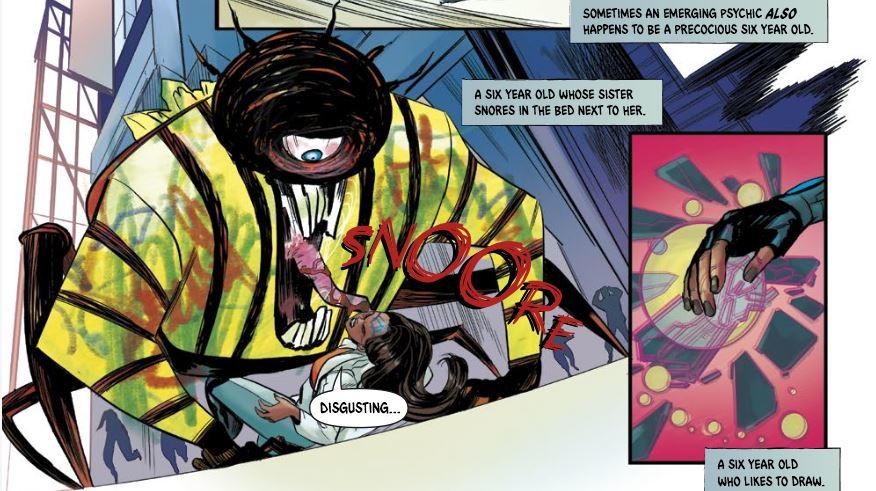 I’m really digging the writing of such a female character with a job that literally holds the weight of what happens to someone’s existence in the palm of her hands, penned by a writer who doesn’t identify as White or Male. I’m also always excited to see new comic book writers debut and show us what they are working with. In such a story dealing with dreams, the abstract, and the merging of worlds could have many readers can be lost in the sauce. Lore fits the book with a unique narration of a person revealed to be close to Daher. This certainly helps as a sort of sign posting, directing readers along in the narrative.

There are some places that have fun names like the Morpehan Annex and Pillowfort (*snort laugh*) that are nods to the overarching theme of dreaming, consciousness and sleep. Pérez’s art style plays up the ordinary and extraordinary in a world that looks very similar to ours with the exception of real-time pieces of dreams coming through.

Straight Out Of A Dream

I like that I have to do a double take the longer and longer I looked at the art. Trying to decipher what and who was of their world and what wasn’t as it become harder and harder to tell. Some figments started to blend in better and better. I also appreciate the instant relief I felt reading seeing no big, obvious, roll-my-eyes, tell tell signs of “male gaze” at women on the page. As you might imagine, that would certainly be a disservice to the narrative in addition the growing number of female and female-presenting characters on the page.

Kelly’s coloring helps make the look of the comic vibrant and engaging: there’s certainly a visual life to this tale. The pops of color help the figments stand out: a tell-tale visual for readers to pinpoint what belongs in this world and what might be a more recent addition. If Kelly’s coloring helps the comic look more alive, then it is McLean’s lettering that helps ground the focus of the comic on Earth instead of Dreamland. The sequence of pages that introduces runaway Ava is a perfect example of Kelly and McLean’s talents syncing up with the art. The placement of text doesn’t distract from the action, and the bloom of color makes your eyes wonder about significance of certain characters. 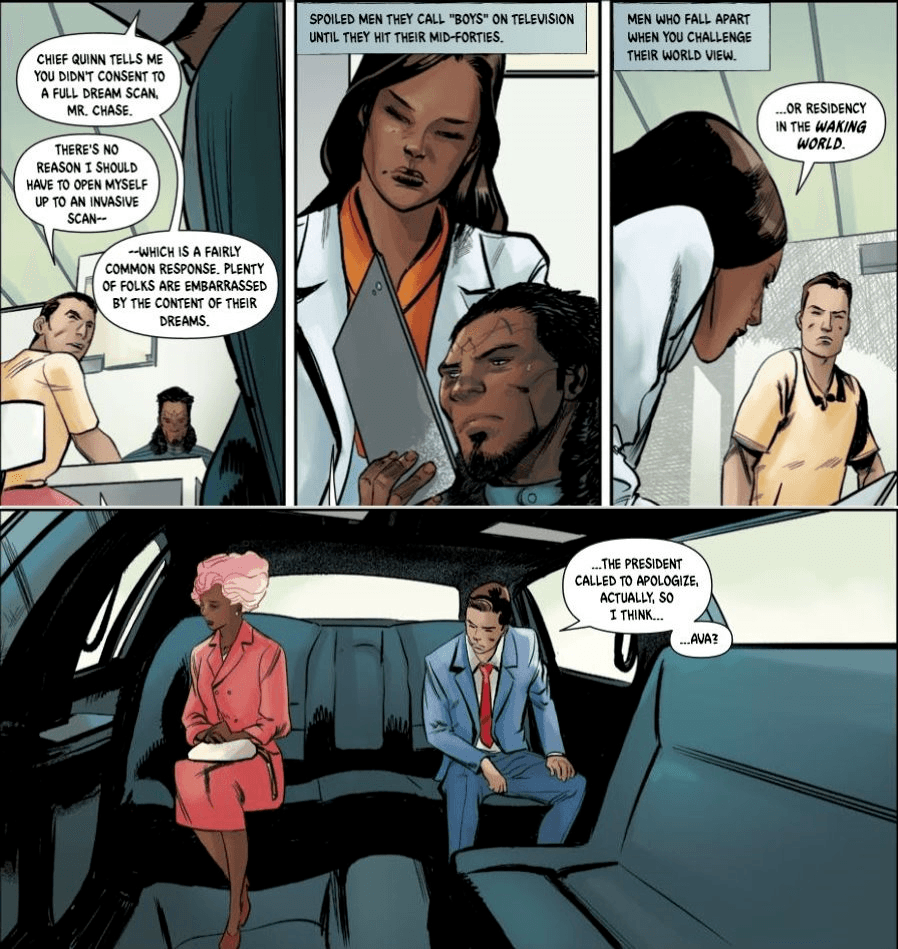 Who has the agency to do the things needed to live their lives and achieve their dreams? This fascinating thread about agency is one I hope is explored more as the story progresses. Daher is a person who we can assume at this point is in a position of power to grant and also dash the hopes, dreams and budding potential of those seeking sanctuary.

We’ve got a solid start to a new comic book series that appears to center women with a creative team that only includes ONE dude. Vault comics, you’ve brought something new to the table that I want to certainly read more of.

If y’all havrn’t picked up QUEEN OF BAD DREAMS #1 yet, call your local comic shop & make sure thwy still have it so you can pick it up after work! pic.twitter.com/AXuZN9BTLa