Black Nerd Problems got the opportunity to converse with Danny Lore the writer of the upcoming comic Queen of Bad Dreams. This comic will explore aspects of the “Dream World” with the protagonist Daher, an inspector judge who calls the shots. When entities of the dream world called figments escape their realm and slip into ours it is Daher’s job to figure out whether they should let them stay or insert them back into the dream world. This interview will delve into this created world in deeper detail and also touch upon representation in terms of queerness, race and gender identity. How does all of that tell us about our movements surrounding the things that hinder us, that enlighten us? Lore expands on Queen of Dreams, and what to think about as we move towards our own.

Black Nerd Problems: Danny, I noticed that you worked at Forbidden Planet! Often times I’ve seen like comic nerds call places like Forbidden Planet a safe haven after physically/emotionally exhausting workloads. Looking back how has this world prepared you for experiences that you’ve have had with other creatives like on The Wilds? And now?

Danny Lore: I’ve worked at Forbidden Planet for years, and it is a second home to me. I’ve met some of my closest friends in the comics community in that store, be it other employees or customers. Being surrounded by comics like that means I’ve spent a lot of time not just talking about comics, but taking the time to really think about why I love comic books. Having the access to read all these projects, and then being able to analyze what I liked and didn’t like about them with other people who are passionate, both as readers and creators, has done so much for me as a writer.

I’ve learned a lot just being in conversation with some of the coolest creators in the game right now- Vita Ayala, Matthew Rosenberg and Tyler Boss to name a few- as we talked ideas, craft, and just survived retail day to day. It also helped me when it came to the little technical things about scripting for artists and editors that I might not have learned if it wasn’t for their help. 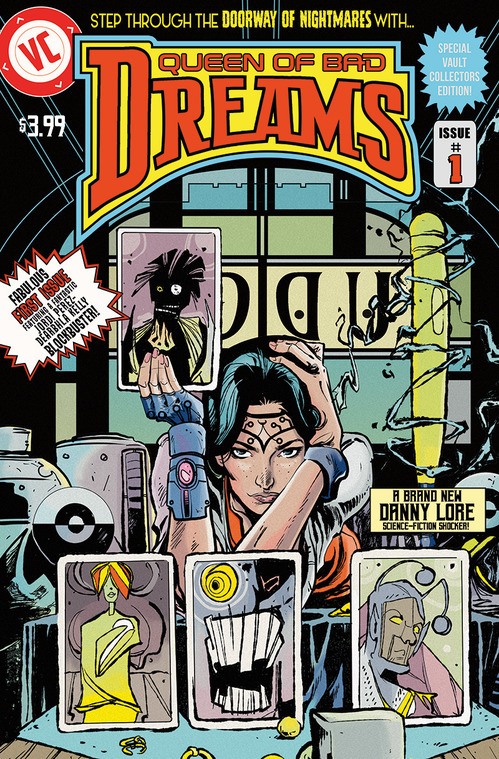 BNP: You’re a brand new comic book writer on a brand new series, being put out in the world by a newish comic book publisher (Congrats on three years Vault Comics!) who is this book for? Who, in your opinion will love it? Who will see themselves in it?

DL: Queen of Bad Dreams is for the kind of reader who wants a world that is vibrant, lively, and makes them sit back and wonder what they’d bring to it. It’s the non-horror version of watching Nightmare on Elm Street– one of the main things that make Freddy scary isn’t the specific deaths in the films, but thinking about what your nightmares would be. I wanted to create a world the reader can interact with, both on an emotional and philosophical level.

Queen is also for readers who feel frustrated with the world outside their door. It’s for the readers plagued with doubt and anger because so many people and systems want to keep them from achieving their dreams. Readers who are looking for a way out- both with escapism, because Dearbhla and Jordi have designed a killer world, and in reality. 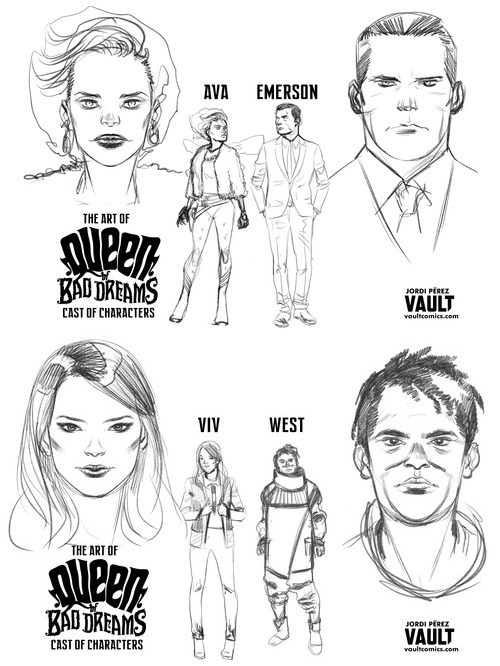 BNP: Living and navigating spaces as a creative that is often knocked into boxes for “other”: a person of color, being Black, a non binary person, etc, there is often so much room for social commentary in the work–what themes or ideas did you definitely want to include in the worldbuilding of QoBD? What nuances do you think other comic creators should explore?

DL: Queen is about living in those boxes. I wanted to build a world where everyone has to think about the question of agency- even those in power. In Queen, even if you don’t want to give marginalized people agency, you have to say it to their faces. You have to constantly be wrestling with that agency.

On the flip side, all of our protagonists are the characters that, in our world, have to think about how much agency they’re going to be afforded/have to fight for. They’re queer and brown, they’re women and non-binary. This is also why Ava, for me, had to be a black woman- because from hair to voices and beyond, there is a particular conversation to be had about how black women are restricted by those in charge. 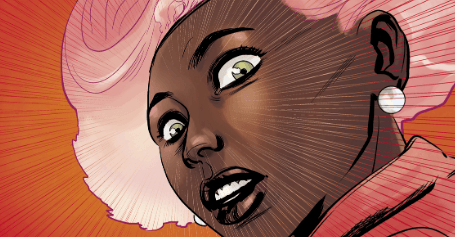 DL: I hope to constantly be in conversation with the other work I see happening in speculative fiction. The original spark of Queen came from the discussion being had in the prose world about HP Lovecraft. People were wrestling with how influential his work was, but what it meant to be brown and/or not male navigating that space. The use of dreamworlds in some of those stories really stuck with me. Add movies like Inception, where I couldn’t help but wonder what would happen if they went even further, and that’s how we got the Morphean Annex. 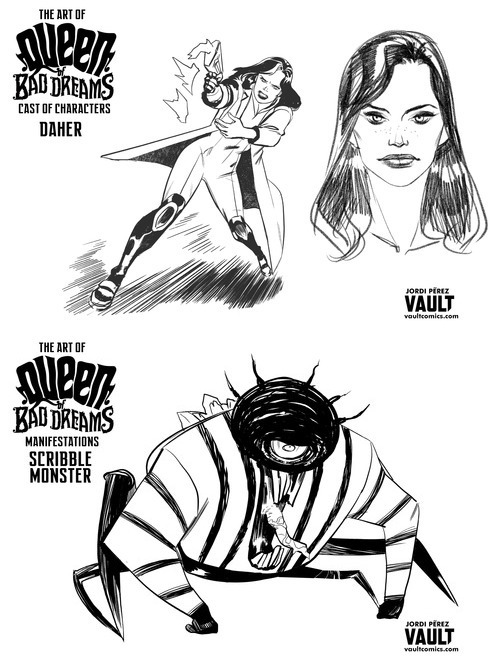 BNP: What were the main challenges you had while creating the plot and these characters? Also will this comic reveal personal revelations about the different layers of the subconscious on your end?

DL: The hardest challenge for me is always to push myself to be as weird as I want to be! This is a world where dreaming and waking blend, and let’s be real: a lot of people have really weird dreams. I certainly do! At the same time, dreams can reveal so much about us, so I wanted to balance that weirdness with a sense of intimacy.

The way to work through that for me was making sure that every single character is at a different stage of realizing their dreams, and what they want out of them. Once I knew what each of our characters dreams of, I could work with both the outrageousness of what happens when we close our eyes and the intimacy of the things that make us cry- I hope, anyway. 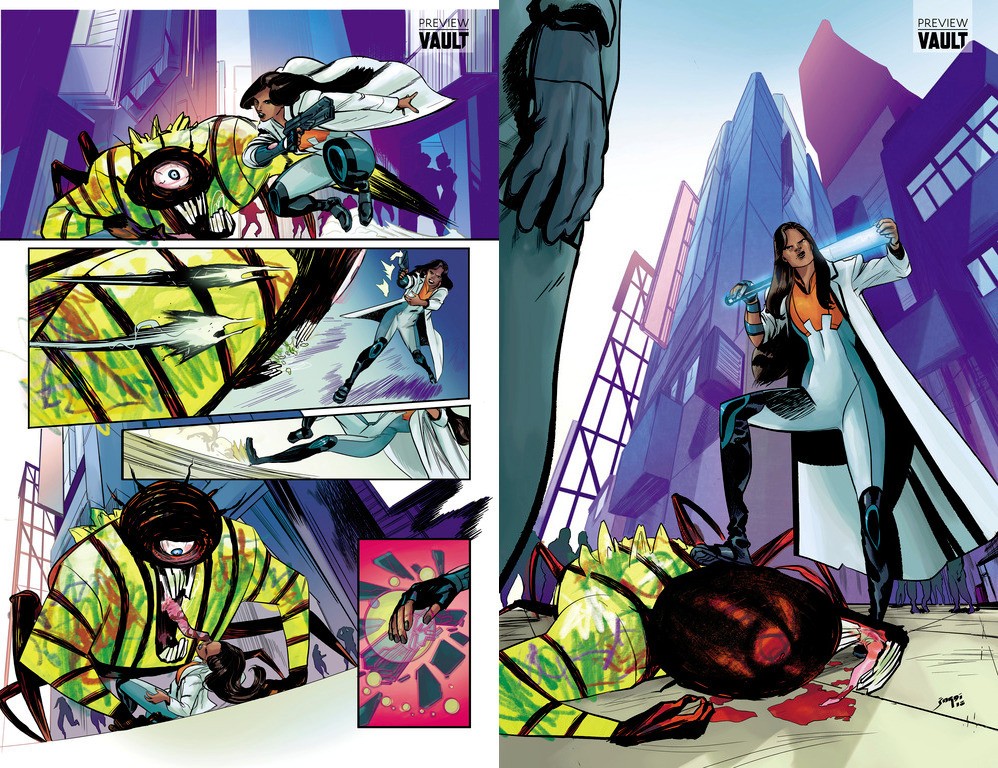 BNP: What art served to influence you during the creation of Queen Of Bad Dreams?

DL: When I was starting to plot, I watched Paprika, Inception, and Bladerunner a lot. I reread Satoshi Kon’s Opus, an incredibly meta-story about inspiration and storytelling I am constantly inspired by. I needed to read and watch stories that bend formats, that go ‘we know what the four walls of the tv/page are, and now we’re going to take a good hard look at how to climb out of them.’ After I started working on the project, I saw Into the Spider-verse and Mob Psycho 100, and they both really changed the game for me on what I could attempt to script. It’s easy, especially as a new creator, to feel as if you can’t play with the rules- so the more and more I see it work out in the real world, the more confident I can be with taking that extra leap.

BNP: Womanhood is not always approached well in comic series, and sometimes if it does, at times it won’t even pass the Bechdel test. What message do you wish to portray in this upcoming series with a femme-centered character?

DL: This is a story that is primarily about women figuring out two things: their dreams, and how to break out of the structures that refuse to let them have those dreams. What I hope to do is tell stories that center women and non-binary characters in ways that make us the stars of our own conversations, and Queen is a part of that hard work, although it is obviously not the entirety of the conversation.

I also wanted this to be a story about brown women and non-binary characters saying ‘it’s on us to support each other’s dreams, so let’s get down to business.’ And I want the men that read this book to be apart of the conversation as well, to really think about how we can make space for each other. We all deserve to have our dreams, and I hope that message resonates with our readers. 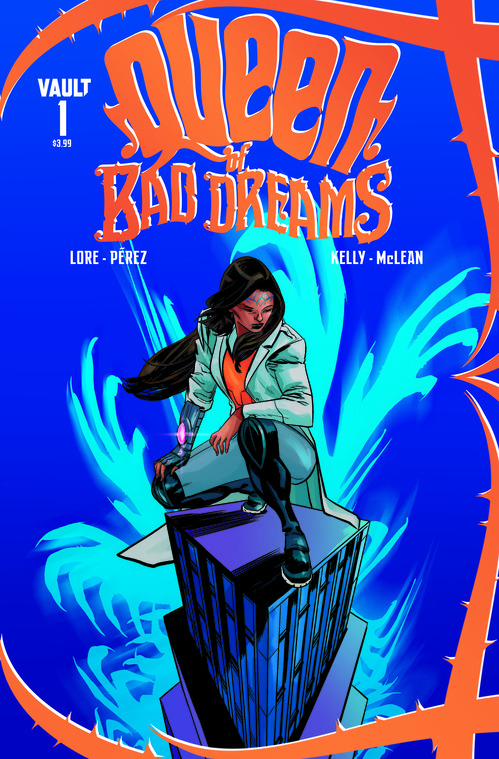