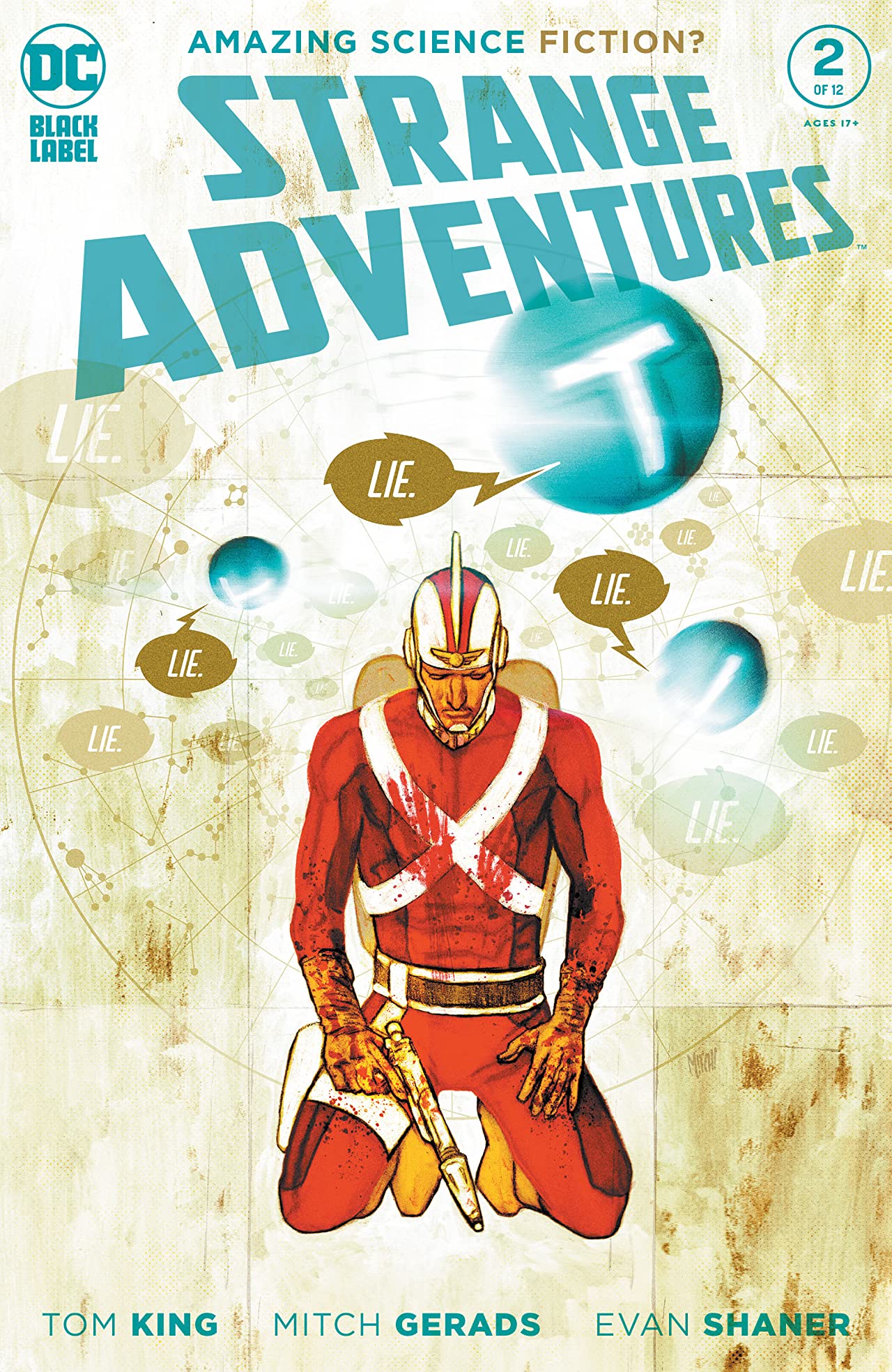 Strange Adventures #2 follows up with the absolute dour revelation from the debut issue when we learn that someone was murdered, and Adam Strange is suspect number 1. The first issue left us with a cliffhanger. Someone is going to investigate this murder (duh). And that someone wears a leather jacket that says “Fair Play” on the sleeves.

But before we get to that Terrific and unexpected news, we need to get into this series as a whole. For one, it is a reunion of Tom King and Mitch Gerads, the team that brought us a melancholy reimagining of Mister Miracle. That comic was what everyone was talking about for the entire year that new issues were released. It was an inevitability that these two would work together on a book again.

And lo and behold, we’re getting a new melancholy reimagining, this time following the hero of Rann: Adam Strange. 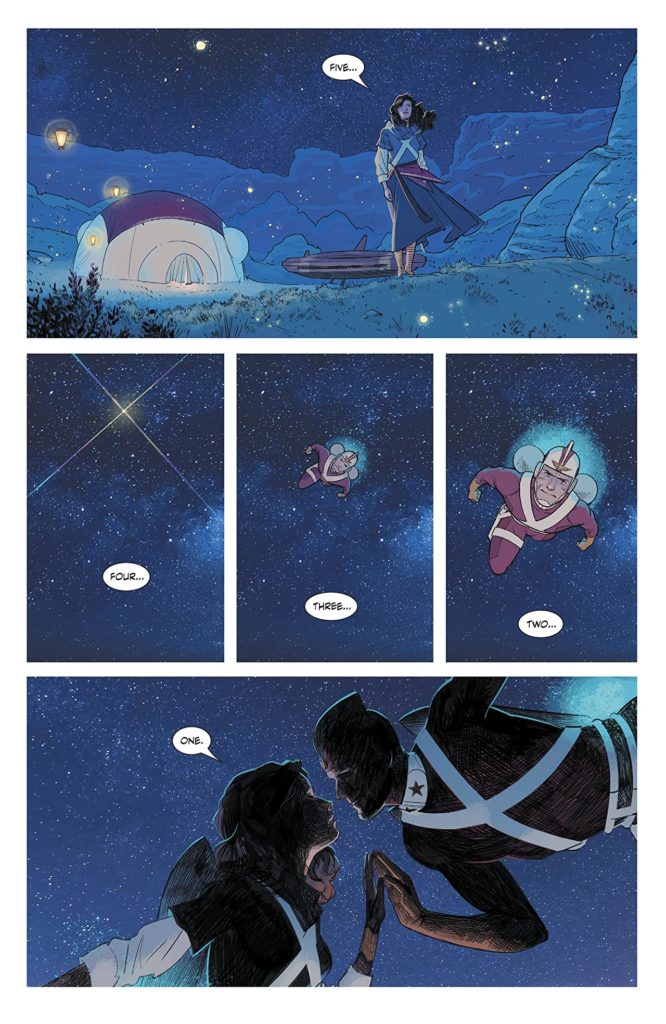 The first issue frames the story and sets up the conflict. Adam Strange is back on Earth after his time on Rann, where he saved the world from war and destruction. He’s written a book about his time on Rann, and he’s currently on a publicity tour promoting it. It sounds like a pretty chill life, all things considered.

But one day, an aggravated fan visits Adam at one of his signings. These things happen. It’s part of the job. But the problem is, that same person is found later with his head blown off, and an energy signature matching a space weapon emanates from his head cavity. Adam inevitably becomes the prime suspect. And after reaching out to Batman, he’s visited by Mr. Terrific, who has agreed to take the case.

That’s where issue #2 picks up. And it follows Mr. Terrific as he investigates the ins and outs of the case. What I really like about it is the time that we spend with Mr. Terrific and how we really get to know who he is personally. We see him in the team books, and we know what he’s generally about. But do we really know him? If you’ve ever had that question, look no further than this book. This man isn’t just a super genius. This man is borderline neurotic with his knowledge.

The way King conveys how Mr. Terrific stays mentally strong is by having his T-Spheres follow him around 24/7 as they test him on a myriad of subjects like trigonometry, Roman history, literature, and chemistry. And my guy gets every question right. Every. One. Whether it’s at 3 in the morning or 7:30 at night. He always gets it right.

Conveying Mr. Terrific in this way ensures the audience that this guy not only knows what he’s doing, but he’s going to be very thorough in the way that he goes about his investigation. I can’t wait to see what’s to come. 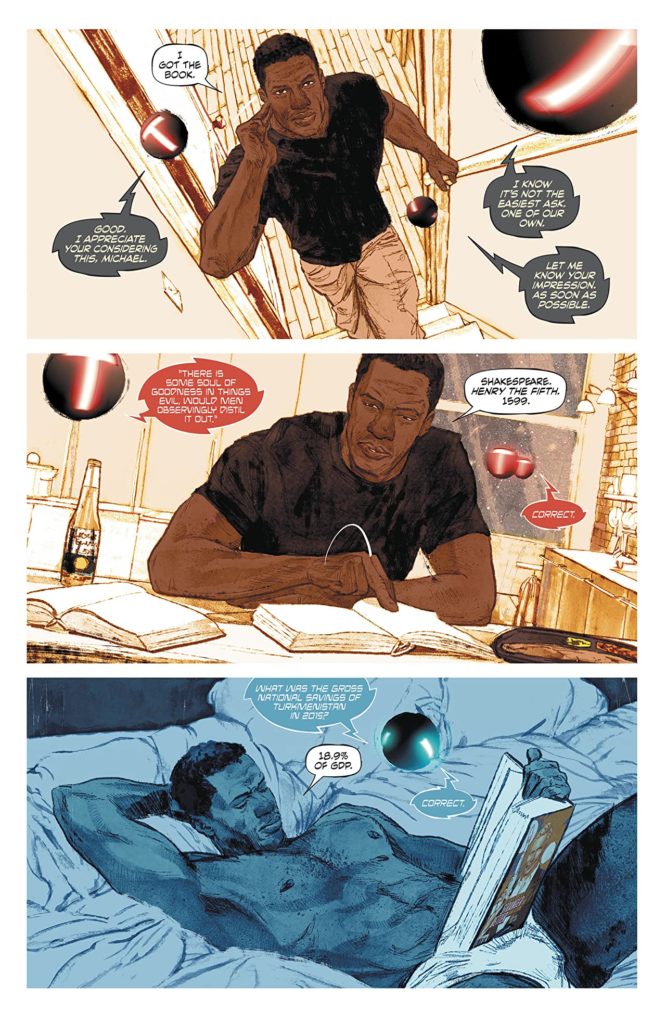 If you would have told me when they announced this book that we were getting a slow-burn detective story featuring Mr. Fair Play himself as one of the main characters, I would have given DC my money then, despite it not coming out for a few more months.

The art on this series is incredible. It differs from King and Gerad’s first outing together as this time it features two different styles. In the present, we get the more stylized aesthetic we grew accustomed to in the Mister Miracle series. But in the past, the art is more traditional and reminiscent to the stories and comics that featured Adam Strange and his many adventures since the Golden Age.

If you like sad heroes with a personal conflict, but more importantly, Black super genius detectives, then Strange Adventures #2 is out here to tell you that you should be reading this series.