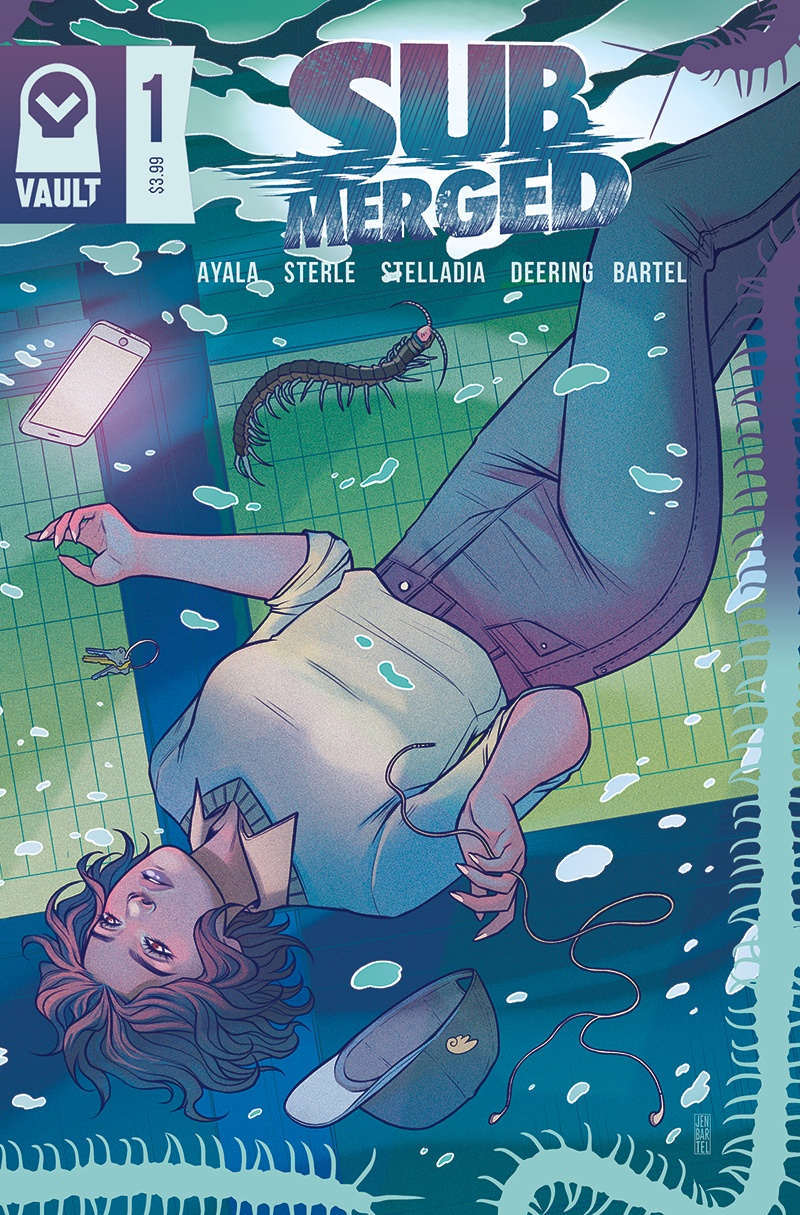 Submerged is an upcoming title from Vault Comics that follows Elysia Puente, a girl on the search for her estranged brother on the eve of the biggest storm in New York City’s history. It’s mystical, lonely, and wet. Resident Vault fiends Morgan Hampton and Leslie Light got a chance to check it out. It features a creative team we’re familiar with: Vita Ayala who pens The Wilds, Lisa Sterle who is the artists for Long Lost and Stelladia, a colorists who has done work on the latest issue of The Wilds.

Morgan: I like the use of colors. The abundance of blues really nail home the theme of loneliness and isolation. That plus the fact that there are only like 4 other people in this entire issue (and I don’t think they’re actually people), really lets you know that it’s just El in these streets.

Leslie: So atmospheric, right? It looks like you’re underwater. The blues also really pop out the few other colors, a little pink stain here, a little brown skin there. So many comics make their money on candy paint (and I love candy-colored comics), that it is easy to forget that good art can be made with a very limited palette. Big shout out to Lisa Sterle and Stelladia for the look of the comic. 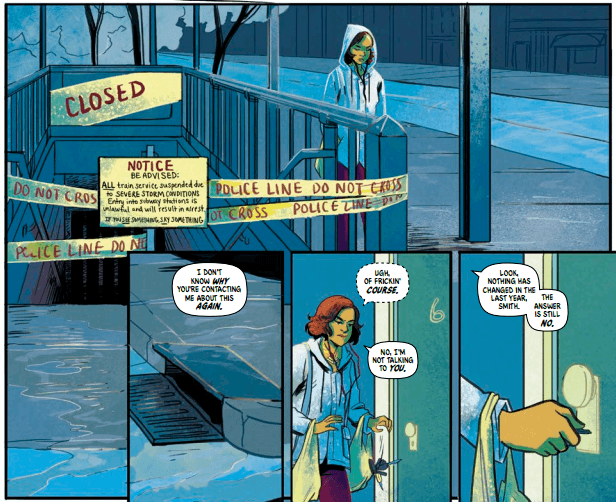 Morgan: Something about this story feels very tragic. And I mean that in a few ways. The story follows Elysia, who seems pretty lonely. It’s just her and her cat. We get the sense that she’s distanced herself from her family and hasn’t spoken to them in some time. But I also mean that it feels tragic in a literary sense. Like this feels like a Greek Tragedy or something. Elysia encounters a few people in this issue but they’re all a bit strange. They seem to have knowledge beyond what they let on and their sole purpose, so far, is to guide El.

Leslie: Oh, this is magical mythical realism to a tee. A quite a bit Greek (Elysium, is the final resting place of the souls of the virtuous in Greek religion), but there are also quite a few references to Latinx culture. El does literally go to the subway/underground in search of someone, but who she meets there…are they gods? Spirits? Ghosts? Just weird NYC people? Who can say?

Morgan: And their shadows. Their shadows didn’t match their physical bodies. So… who is them?!

Leslie: Wait! What? *checks* See…that’s creepy as hell. Like I’m glad I didn’t notice that at first because it would have been a shock. That’s the subtlety of the book, that you can read and re-read and get a little more each time.

Morgan: What kind of insect was that? It’s on the cover and it pops up throughout the issue. And it’s nasty. I failed Biology in high school so I have a limited knowledge of bugs. I’m asking because it’s obviously important to the story and knowing exactly what kind of bug it is might give some insight.

Leslie: Yo… I’m not sure how a NYer would manage bugs that big just scooting around, but where I come from that’s the kind of bug you take a flamethrower to.

Leslie: Ugh. The comic is full of touches like that, bugs, dripping water, peeling paint. In so many ways, the subways are like catacombs, deep and dank and endless. The art delivers that, while El is so unafraid, or at least indifferent. This is a girl on a mission. I really connect with the set up around her and her brother, Angel. It is going to take us in a great direction.

Morgan: So something I really loved was the use of Spanish. I love when comics use other languages. Submerged does something bold by not giving the reader translation boxes. It’s dope because if you speak Spanish, it’s validating. It lets you know that this a medium that you belong in. And if you don’t speak Spanish, it holds its power by not compromising itself by letting others in who might not understand. The beauty of this is that it’s 2018 and you can google translate whatever you need to know and still understand things perfectly fine. And you’ll probably pick up a few things. Aaron Schlossberg should give this a read.

Leslie: I’m not even sure you’ll need that much Google Translate as many things make sense in context. The fluid, contextual nature of the language felt very authentic and, honestly, New York. A friend of mine says that you can find any example of Latinx life and culture in NYC, this comic taps into that a little bit.

Morgan: Another thing that was done with care was the use of flashbacks. It gives us the much-needed context and backstory but in a way that feels natural. We only get these glimpses into the past when it’s directly related to something happening in the present that reminds Elysia. That way, it feels more like El remembering something, rather than a flashback shoehorned in because it’s necessary for the story. I also like how it details the gender dynamic that is all too familiar with families: The girl is always responsible for the boy. When the boy messes up, it’s somehow still the girl’s fault for not doing a better job of protecting the boy. 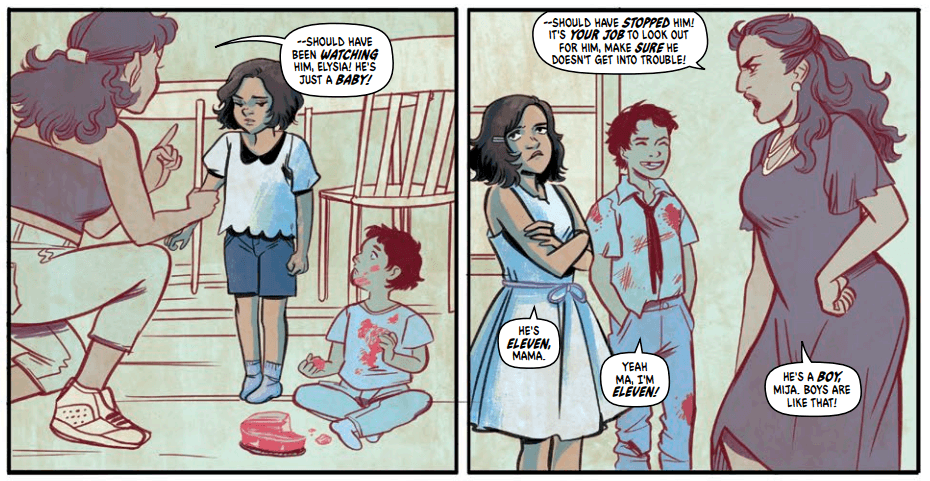 Leslie: There’s so much there! The older sibling/younger sibling thing. The girls don’t fight thing combined with this expectation that she protects him. Speaking as an older sibling to a younger brother, whom I am still responsible for, this rang so clear for me. But how does she feel about it? Conflicted yes, but guilty? This is weighty stuff for El, the kind of emotional baggage that drives her out into the worst of storms.

Morgan: Speaking of flashbacks, the brother’s trouble kept progressing each time we visited the past. What kind of predicament do you think he’s in this time?

Leslie: Whatever it is, it isn’t what El *thinks* it is. This isn’t another street mess, this is something big. Dare I say, magically significant? But is it tied to the rain or just coincidentally happening at the same time?

Submerged flows into comic shops on July 4th. So after you drink one too many beers and eat four too many hot-dogs, consider picking it up to hydrate yourself.

Our favorite @heyjenbartel cover EVER! Colors by @Treestumped. For Submerged #3.

SUBMERGED #1 lands on July 4th ahead of #SDCC…AND is fully returnable. So all you #comic shops out there can order UP? at basically no risk!