Super Smash Brothers!! Let the sound resonate all up in ya eardrum. Let’s take it back to ’99. Napster got you downloading Biggie, Jay-Z, Pac, Nas, Em & Dre, Destiny’s Child, Britney, Backstreet AND SOME. WHY? CUZ technology fam. Y2K bout to hit. Mufuckas is losing their minds doomsday prepping ‘n’ shit. But you lyin’ in the cut coolin’. Ya moms, pops, Nana or gramps just copped you a crisp Nintendo 64 as your big Christmas present, which had you hyped on some Super Saiyan 3 shit. You done crushed every game on the market. Super Mario? Collected every star twice. Goldeneye? Imma certified Marksman. Mario Kart? Runnin’ laps around fools. So you bored as shit during the summer of ’99, until you get word this new 4 player Royal Rumble style game just dropped and it is sick beyond belief.

Maaaaannnnnnnn Super Smash Bros was that ass kickin’, smacketh down layin’, bow droppin’ crossover greatness that changed the game! Sure, Marvel Vs. Capcom was crushin it in the arcades, but the homies wanted somethin’ real. Somethin’ to sit on the couch playing while slammin’ a whole pack of Oreos, two bags of Doritos and some Dunkaroos. Somethin’ you didn’t have to drop $18 in quarters on to enjoy all night. Somethin’ to play in your room with 5 of your 9th grade homies while mom dukes whip up some hot pockets and wings to be devoured. THE HOMIES WANTED CHARACTERS FROM ACROSS THE NINTENDO UNIVERSE. They wanted said dope ass characters to battle until they icy death.

They want items shrouded in mystery and intrigue. Weapons that would deliver the most jaw dropping knockouts. I’m talking about Pokeballs that have a surprise guest warrior in every skull crushing toss! I’m talkin’ bout Louisville Slugger baseball bats that ended streaks and careers in one swing, sending your boy into the next Galaxy. I’m talmbout hands down the greatest fighting game in video game history!!! Now, let’s get into the entire reason this game franchise became what it is today: That outrageous ensemble of characters the Nintendo Gods blessed the good gamers of the world with. 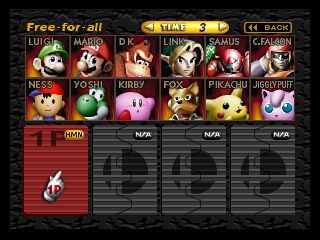 Whole team eatin! AYEBODY on the character select screen put in that work. From Metroid to Zelda. From Pokemon to Super Mario. This cast is one of the most insane works of modern art. To throw a fireball throwing plumber in with lighting bolt jolting yellow rodent is a ballsy move.

Kirby: My personal favorite. The deadly weapon of choice. My man Kirby puts in that cotton candy bubble gum appearance, pink piranha savage, assimilation WORK! He out here taking the greatest powers in the game and making them his own. Steal yo shit then make you pay for it with yo own sheit!? That’s cold. That’s Chris Tucker in Money Talks cold. Mike Lowrey flow. My man Kirby is the ultimate survivor cuz he be out here getting knocked off the board with ease, nearly 2cm from death when he puffs his way back to board ready to deliver the rock transformation dive bomb fade to an unsuspecting victim!! That’s why Kirby is the truth!

Fox: The fastest player game was my least favorite character but real recognize real; he was a crazy difficult matchup, if I’m keeping it a buck. Goin up against him was always a headache type battle. So annoying with his bullshit ass pea shooter gat and deflector. Those two moves showed you why his long-range game was official AF. Then you couple that with the most annoying board in the game..that damn sun expanding world (Planet Zebes), you should understand my hate. One thing I couldn’t deny was the ill training regiment you could get out of playing against 3 Fox computer characters on the highest difficulty. The makings of a Legend.

Mario: The fireball Jutsu spitter. The Spin Hit Combo King. The plumber turned hero and chicken parm hero eater. Obviously they had to make sure Mario was dope so they gave him the Ken and Ryu hadouken uppercut of coin collecting death. They gave our boy a sick but completely unnecessary taunt move by turning homie into giant Mario statue for a few seconds. But good LAWD did it feel good to stunt on ya homie by destroying him or her (girlfriends and lady acquaintances can get it) with a dropkick missile strike to fucking dome! Then hitting the Rita Repulsa “Make my monster grow!!” Taunt button as you stare a hole through the side of ya homie head cuz (s)he knows you’re grillin’ the shit out of em and knows better than to move they neck one fuckin’ muscle. Then you slooowwly put in the new Usher CD and hit play. Yeah, let it soak it in. Let it burn.

Samus: Smooth operator. Death from Deep. The Femme Fatale that nobody knew was a woman underneath the suit putting in that Sigourney Weaver WORK. The grenade bombs she could litter the board with at any moment?! That electric chain grab technique snatchin cats up 10 ft away!? The only one who can bust out the lightpole barrel YOPPER and let it go at any given moment. And don’t give her time to get her Spirit Bomb game up cuz y’all know it’s bout to be 1 Hit Kill status.

Captain Falcon: The one unlockable character that should’ve been one of the original 8. My man Captain Falcon is the 2nd fastest character behind Fox and absolutely obliterates his enemies with his speed, precision and power. The will run up on you, uppercut your ass into the sky, toggle your ass in the sky before hitting his upward smash move and dropping that latch on bomb hit, KABOOM baby. Or he’ll do it for the Iron Fist fandom that still can’t get over that trash season and one hit kill your ass with his fiery Phoenix punch from hell. Then hit you with the flyest taunt in the game: Show me YA MOVES!

Yoshi: I’m not even gonna lie, errybodys favorite friendly green raptor type trash… but can’t nobody deny the lethal ass Lou Kang bicycle kick Yoshi would deliver to cats from below, rackin up like half a hunnit percentage on ya homies. Then you got his cheese move of swalling enemies, turning you into an egg and shitting you out off the edge of the board. Who does that? A reptile.

Pikachu: Throwin up his Johto meets Kanto Master Hand gang signs, Pikachu was a favorite pick among many rookie players. He was recognizable and had some cool moves. Pikachu could fire off jumping lightning sparks that traveled a decent amount. His Tail Whip uppercut was shockingly powerful. His Speed Force teleportation move could get you back on the board from deep. But Everyone remembers using him for one reason and one reason alone. That brolic ass thunderbolt attack that electrified and stupified opponents upon impact.

DK: The muscle of the Squad ran around like Brolly in DBZ. DK’s swoll ass just flexing on mufuckas left and right. Let him charge up and you might as well go seppuku on yaself cuz he out here tossin’ Tyson in his prime haymakers straight up sending cats into the abyss without a shadow of a doubt. That One Punch Man wind up, Superman haymacker of death had homies shittin’ bricks when they saw his body twinkling. Just waiting to unload devastation on a sucker. Defensive game was on some Metal Mario shit too! He was by far the hardest character to knock off the board because of his insane strength and ability to treat hits like mosquito bites, even when he was over 100%, so you had to know when to go in for the kill or DK would eat you alive. Then on top of that he had the ill Booker T arm spinarooni to get him back onto the level after being knocked off. Debo ass character choice.

Link: The Mystic Murderer. Elfen Elite. The Hyrule set repper had the arsenal. If you knew how to use Link then you would murder cats from deep. You’d keep enemies at a distance tossin’ a barrage of bombs at your victim while simultaneously lacin’ cats with the boomerang. That would rack up points something severe and then he would finish you with his deadly ass sword spin move or grapple hook chain of misery. Link was slow but had the Tenten weapon specialist game on point.

Special shoutout to Luigi, Jigglypuff and Ness.
Ya cool too. 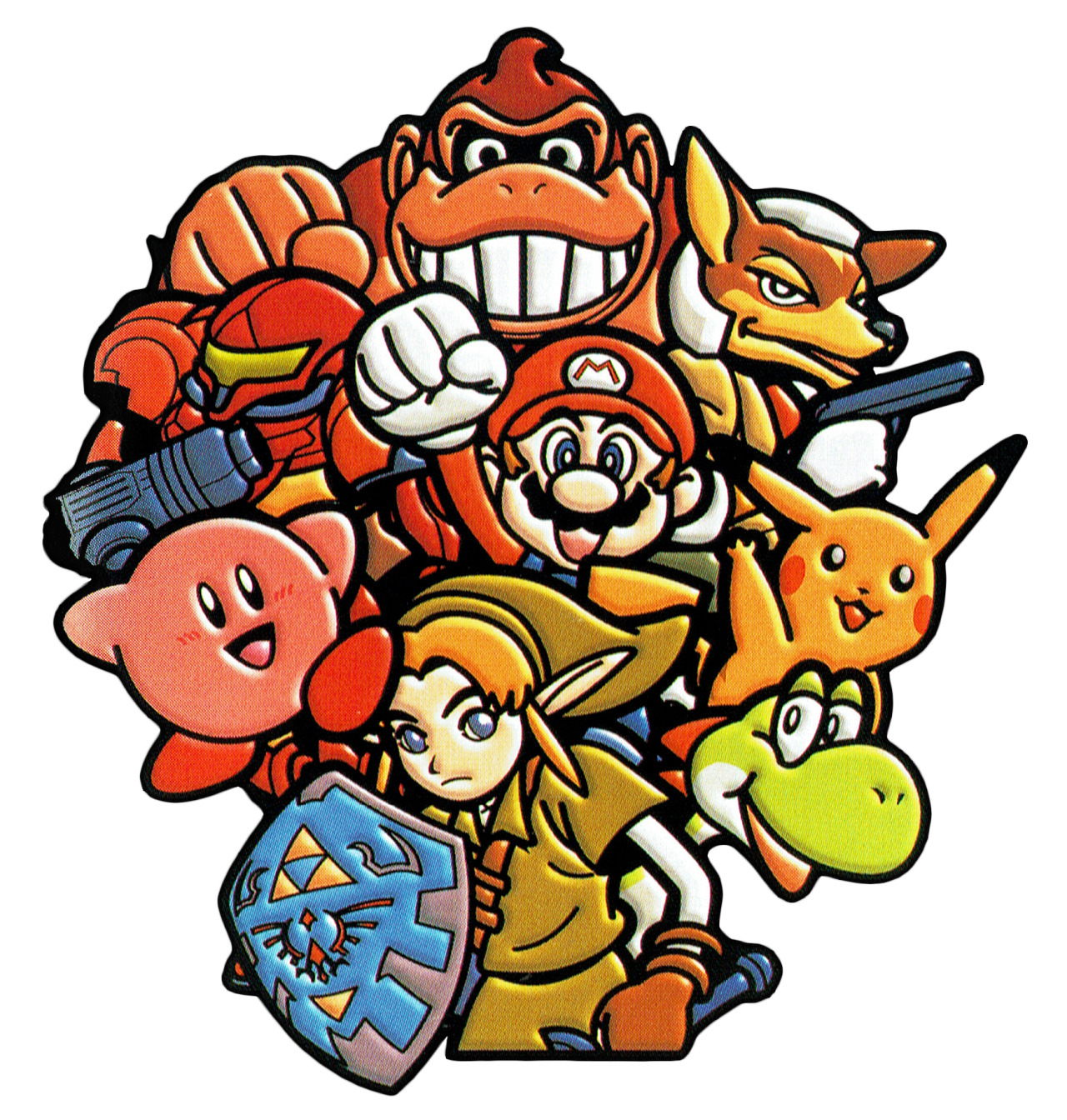 That’s all I got. You know what it is. Super Smash Bros tournaments go down on a regular basis across the nation. Find your local spot. Seek out the best player in the room. Then beat their tired Smash move using, shield abusing, item happy grabbin’ ass into a Quentin Tarantino bloody pulp. Tell em Ja-Quan sent you.