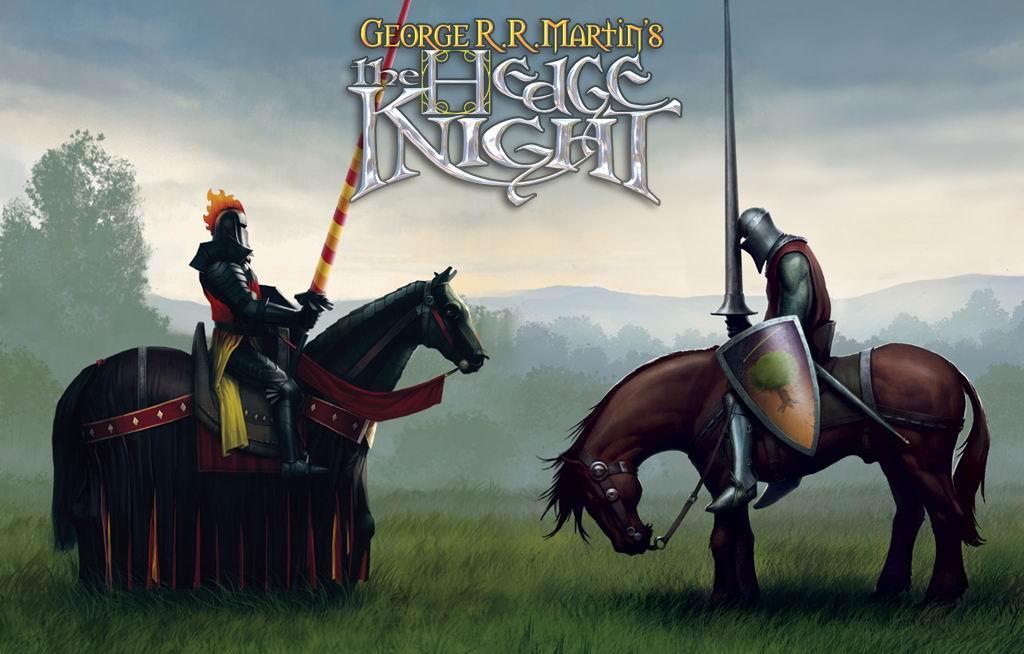 In this second installment of The Hedge Knight review we’re going to jump into a lot more action. Part 1 was much more of an introductory course. I’m ’bout to hit you with the dopeness.

With his newly acquired squire holding down camp, Dunk sets out to register for the Tourney at Ashford. Unfortunately, he fails miserably at convincing anyone who he and/or Ser Arlan of Pennytree were when they served for them. He ultimately gets denied like a Freshman trying to get into the bar with a fake ID.

The one good thing he gets out of this shameful showing is that he has to come up with a proper knight’s name for himself on the fly and the only thing he can come up with is Ser Duncan the Tall. Money. Dunk’s next move was a sad one; he has to sell one of the horses. Thunder has to carry him in the tourney and Chestnut’s too old so he’s got to say goodbye to Sweetfoot.

While waiting for Ashford’s master of horse, Dunk hears trumpets blaring and bears witness to the most striking banner in all of the seven kingdoms. The fierce three-headed Dragon of House Targaryen on a black field. Royalty was approaching. 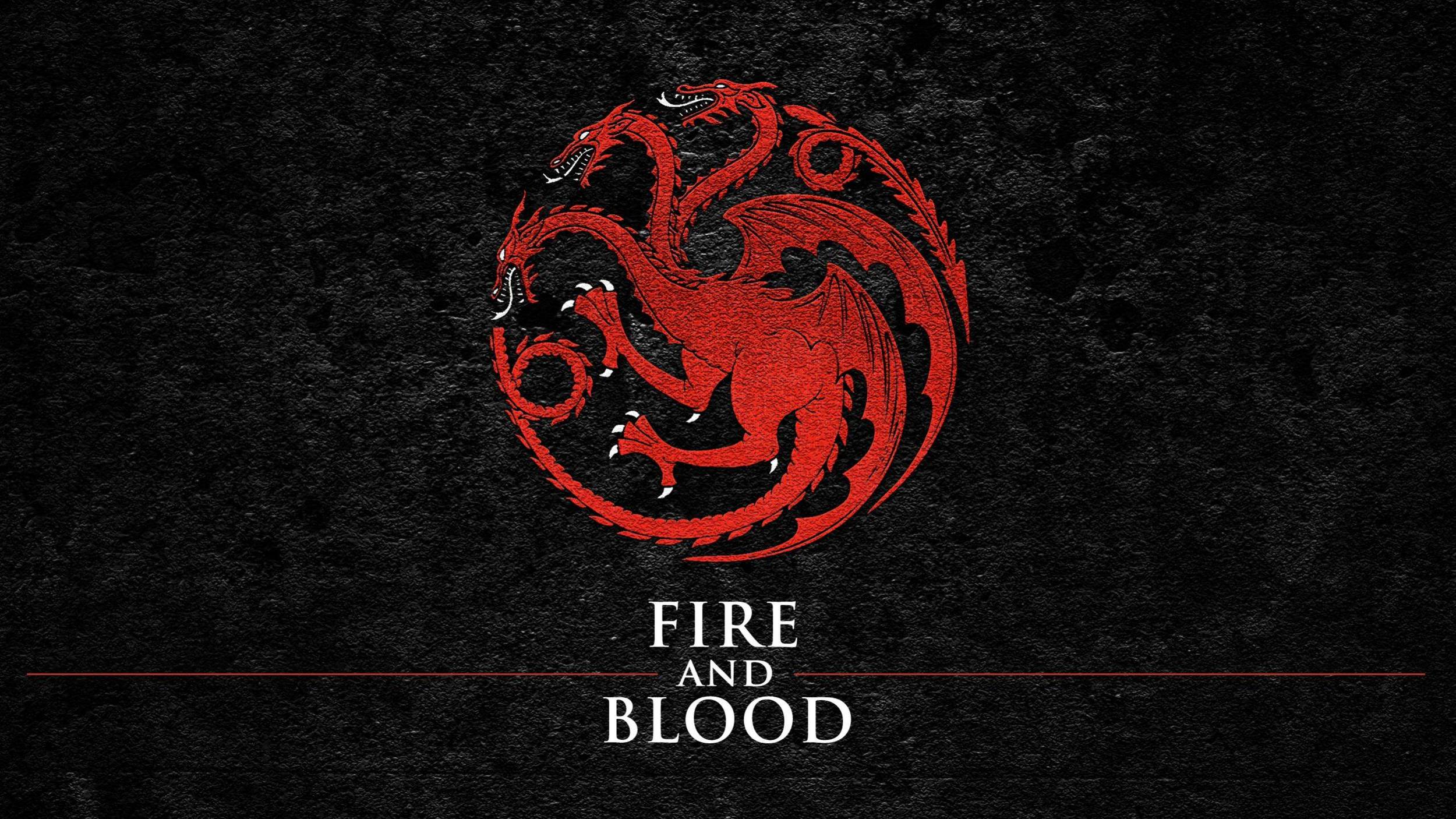 Now this is a good time to break down what’s been going on during this time period, whats happening in King’s Landing, and who sits the Iron Throne. The Westerosi year is 209AC and good King Daeron has been ruling for 25 years while the realm prospers despite the Blackfyre Rebellion. He has 4 sons, the eldest being Baelor Breakspear, Prince of Dragonstone, Protector of the Realm and Hand of the King since the Rebellion in 196. The youngest, Prince Maekar Targaryen, Prince of Summerhall who was nearly as respectable yet overshadowed by Breakspear’s prowess. Lastly, Aerys the clever bookish one, and gentle Rhagel ever sickly. King Daeron’s younger brother, Brynden Rivers aka Bloodraven, the one great bastard that remained loyal to the crown during the rebellion, was the King’s Master of Whispers and was widely rumored to be pulling many strings throughout the Kingdom with his sorcery, spells and spies. 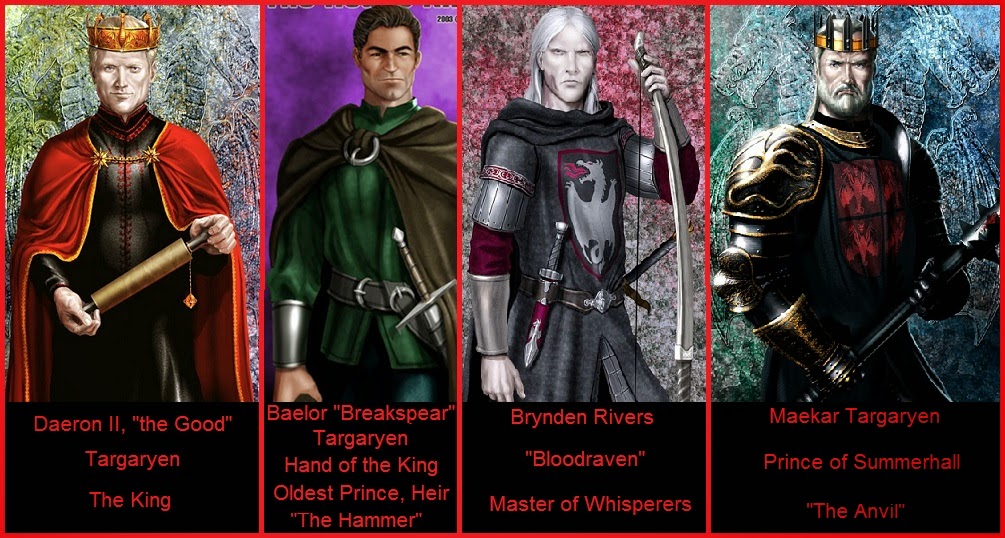 Dunk sees three knights in all white approaching with the fair maid (most tourneys feature a fair maid that sits by the ruling Lord’s side as Queen of Love and Beauty) and rider in black and scarlet following behind. After the rider dismounts in all his princely glory, he asks Dunk to take his horse, to fetch him some wine and a wench. Dunk gets crazy disheveled, informs him hes not a stableboy, but a knight and gets crazy shade thrown his way. Luckily the young lad has business to attend to and is out. Dunk’s first encounter with a prince wasn’t terrible, but clearly he needs to get his mind right if he wants to compete against the truest warriors and deadliest knights of this tourney. Ashford’s master of horse arrives and kills Dunks hopes of slangin’ Chestnut. Determined, he moves on and notices a few Kingsguard chillin’ so he has a quick word. They tell him they wont be entering in the lists because Kingsguard cannot ride against the royal blood they are sworn to protect. Just like that, he realizes he may have to go up against Baelor Breakspear’s eldest son Prince Valarr, who has the honor of being one of the fair maids champions, andddd may have to go up against one of the other two princes entering the contest. Rigorously trained, highly skilled royal bloods of the dragon. Shit just got real for Dunk. 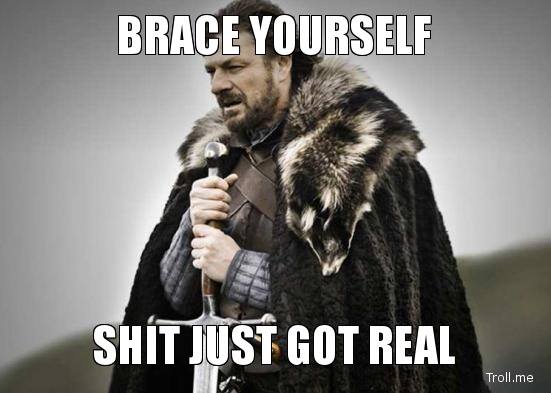 Finally, Ser Duncan tracks down someone willing to take Chestnut off his hands walks out with enough money to live for a year. But this money is to be used for glory, not survival. He ventures back to his camp but stops by a puppet show being put on by a Dornish girl he thinks is way badder than the fair maid. He tries at her, but she’s got money to make and he continues his trek to the elm tree. He watches a few knights training and is challenged by a Fossoway who is beating down on his younger Fossoway cousin. Dunk wants no part of it and keeps it moving. The younger Flossdaddy Supreme catches up to Dunk and introduces himself as Raymun Fossoway and wishes him luck in the tourney. Tourneys can go a number of ways including melees, individual combat, pairings and teams but this one will end with five champions who remain unhorsed and unbeaten after three days of jousting. The champion or champions of a tourney determine is the fair maid would retain the crown of Love and Beauty or if another should wear the crown in her place (huge wink wink to Rhaegar Targ and Lyanna Stark). 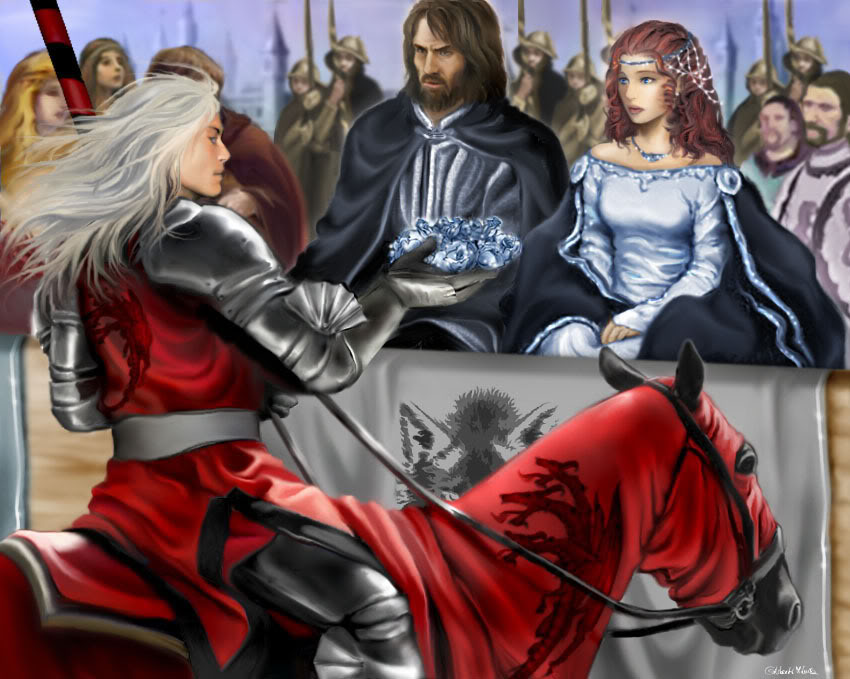 As the day drew to a close, Dunk and Egg examine the armor that Dunk has to work with and Dunk promises he’ll show Egg the tourney grounds while trying to find someone to vouch for him so he can enter the lists.

Once again, Dunk strikes out. This time trying to convince Lord Dondarrion that he served Ser Arlan and that the old man took a wound in his service. Disheartened, he returned to Ashford Castle to tell the head steward he couldn’t find a soul to vouch for him. While waiting, Dunk chances to stumble upon a royal conversation going down between Prince Baelor and his brother Maekar. He gets summoned before them and is sulking about how nobody remembers Ser Arlan of Pennytree and out of wayy wayyy wayyyy left field Prince Baelor hits everyone in the room with a, “Yea I know that dude.” and Maekar is like, “BRUH how the hell do you know a lowly hedge knight like that?” Baelor explains that the old man held his own in a joust against him where Ser Arlan broke four lances against one of the greatest knights in the realm. And just like that Dunk found himself admitted into the tourney.

Dunk heads back to camp but on the way notices Egg watching the Dornish girl putting on a good puppet show reenactment of Florian and the Fool. Dunk scoops Egg up after the show and starts feelin himself so he asks the puppet girl hes crushing on to paint him a proper shield, because she does such fine work on the puppets. She flirts with him a little but Dunk has no game and drops some lame ass line about her being just right for… puppets. BOOOOOOO. Get your game up, Dunk the Lunk. The first day of the tourney is now upon us. And with the first day, comes the introduction of the fair maid’s champions and all the great houses getting the first crack at unhorsing one of the 5 champions. Those champions were the two sons of Lord Ashford, Androw and Robert who would likely be the first to fall. Leo Tyrell, Lord of Highgarden. Ser Humfrey Harding from the Vale of Arryn, winner of a great melee last year and last was Prince Valarr, Prince Baelor Breakspear’s heir and the king’s grandson.

Next up were the first group of challengers, who were guaranteed to be some of the greatest warriors in the realm, and did little to disappoint. First up was Ser Damon Lannister the Grey Lion of Casterly Rock, his golden haired heir Tybolt Lannister, Lord Tully of Riverrun, Ser Abelar Hightower who had the biggest pair to challenge Prince Valarr, and lastly Ser Lyonel Baratheon the Laughing Storm. Okay, this is where I leave a little to be desired. I’ve gotten hella in depth with this story, so I’ll leave the most bloody portion of this tale up the imagination. Or go cop the novella, whatever you fancy. But just think about the ancestry going on in this battle. The great uncle and great grandfather of Tywin Lannister riding side by side with 8 foot lances in hand. Late King Robert’s great grandfather being named the Laughing Storm?! That’s oozing with all kinds of detailed reasons and history behind the name. I mean the greatness of this tourney goes on and on. ANDD the real drama hasn’t even begun. 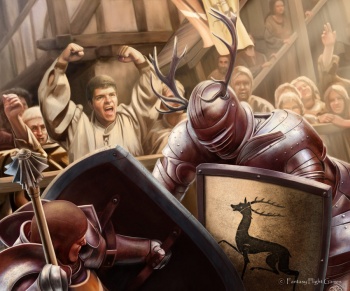 Prince Valarr won 9 hollow victories, as it seemed these cats were too shook, old or green boys of high birth trying to impress. Tybolt Lannister and Leo Tyrell both put in that work and remained unbeaten. Ser Humfrey Harding humbled fourteen knights, each formidable… until late in the day when Prince Aerion ‘Brightflame’ made a surprise entry. Too bad his only motivate was to show all in attendance exactly how many fucks he gave about chivalry when he challeged Lord Harding and put a lance through his horses neck and subsequently broke Harding’s leg when the horse fell. That killed the mood swiftly and Lord Ashford called a halt until the morrow.

Dunk grabs a tall boy for himself and Coronita for Egg and is watching his boo put on a puppet show about Nymeria and her 10,000 ships when young Raymun Fossoway hits Dunk with a SQUADDDD UP! He invites him to chill and sip on some Arbor wine with the homies. He left Egg to enjoy the show and they chat. Dunk finds out Prince Maekar (Brightflame’s pops) left to go search for his missing sons but RayJay Fossoway thinks Maekar’s heir, Prince Daeron (named after the king) is just off getting hammered, cuz he’s about that life. Unfortunately Daeron has Maekar’s youngest son with him, soo not the best situation for a father. Not to mention all his sons are all being overshadowed by Baelor Breakspear’s. Maekar’s kids are Daeron the drunk one, Aerion ‘Brightflame’ the vain and cruel one, Aemon so unpromising they gave him to the Citadel (Maester Aemon shade) and the youngest Aegon.
Anddd the story just turnt up. Egg comes bursting into the Flossdaddy pavilion saying someone was hurting the puppet girl. Dunk threw on the sonic shoes and was there with the quickness. He was sending people flying with the flick of the wrist trying to get through the crowd then had to stand there in astonishment as he witness Prince Aerion stomp out some puppets, open up Tanselle’s hand (his puppet girl crush), grab one finger and snap it like a twig. 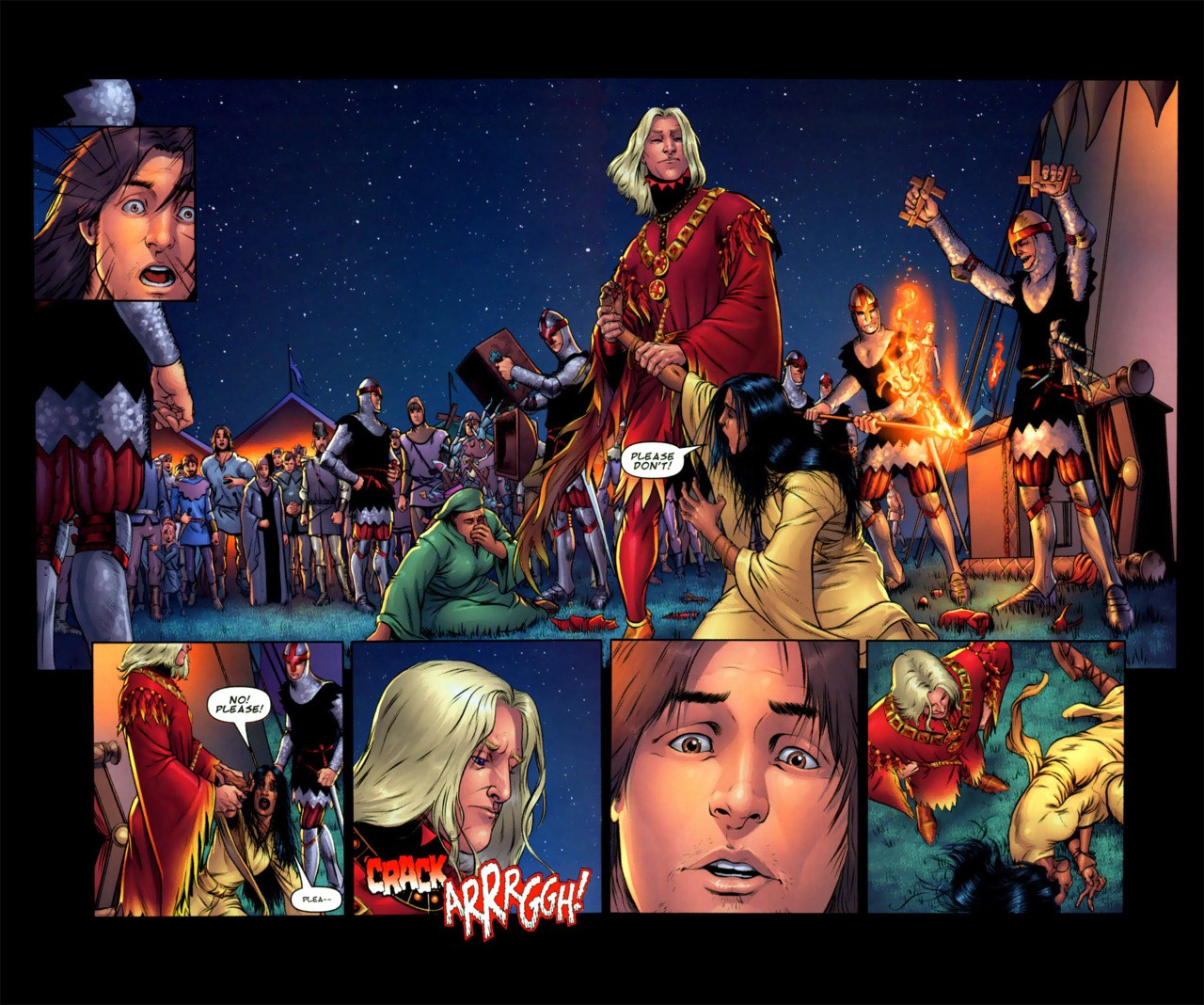 Confused but filled with rage, Dunk hit Aerion so hard with a Tiger Uppercut that the Prince went airborne.

When Brightflame went for his dagger Dunk dealt him a diesel kick to the face before the Prince’s men could swarm him. Aerion hops up and hits Dunk with a sprite, “You loosened one of my teeth, I think I’ll break all of yours. Wait, wait. Do I know you?” Dunk was like, “Bet you’ll never mistake me for a stableboy again, with yo punk ass.” Aerion gets all boogie and pompous with it and says, “I recall. You really tryna get murked doe? She’s a traitor. Dragons never lose. Not even in fictional reenactments with strings and wood.” Dunk thinks to himself, “This mothafucka is out of his royal mind.” Aerion gets bored and tells his men to gut Dunk Scream-style so he can see his own entrails and then the voice of his squire breaks in and says “Don’t hurt him!”. Dunk tells him to shut his mouth and run away before they do the same to him. Then Egg finally drops the bomb we’ve all been waiting for. He says that not a soul will touch him or they’ll have to answer to his father Prince Maekar.

So goes the real beginning of the Tales of Dunk and Egg, or should I say, Ser Duncan the Tall and undercover Aegon Targaryan, the fourth of his name and youngest son of Maekar Targaryan, Prince of Summerhall who himself is the fourth son of King Daeron the Good, the second of his name.