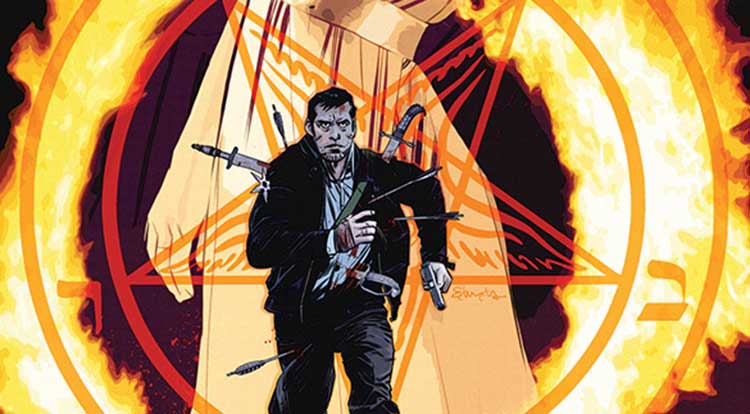 Ten Grand is in this month and J. Michael Straczynski shows hell’s game plan for the take over.

So this issue of Ten Grand is basically Hell doing their villain monologue and informs Joe Fitzgerald how he was doomed from the get. Straczynski makes this different then a simple rant we see the behind the scenes. All the little things that have happened from the jump. The demons talking to Joe, why heaven can’t see the way hell is making moves on earth, the explanation also ties into the art work which gets this almost beautiful infrared look at times when it comes to areas with spiritual? other worldly? ….shit beyond our mortal plane of comprehension my dude. It explains more upon why it look the way it does as its described as a void. WE get an inception/enders game description of it.

Now as we are getting the explanation of Hell’s plan to shut heaven down. Where this issue shines is how Joe is dealing with this ultimatum he is given. He is plotting all the while and knows that even what he is being told now isnt the full scale of things and we see (to my knowledge) a very vivid depiction of Joe sweating in hell as he is coming to his decision. He tells himself repeatedly to stay cool but he does say (to himself) that he is scared shit less. This is my favorite scene in the issue. We have yet to see Joe under pressure like this. Rightfully so as well i mean no big it just the entire universe on the line due to his love… no pressure whatsoever.

It just that you love this woman so much that hell found a way to corrupt it and use you as a vessel to bring on the apocalypse on heaven to eclipse all apocalypses…. I’m really waiting to see how Joe is going to find a way to con hell on some loki shit.