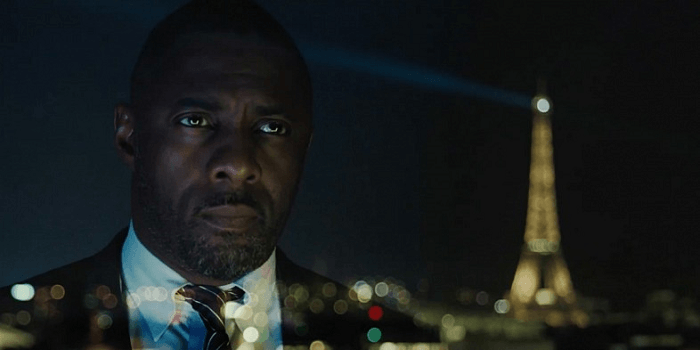 [divider type=”thin”]
In the spirit of already having the Blackest Black History Month ever, this shit just dropped like the suspension on your whip when you agree to give your homie a ride home from work and he bring 3 more bruhs with him. This shit right here, my special agent? This shit right here, doe? Considering that Spectre was diet landfill and cats stay coming up with reasons why 007 is allergic to melanin, Idris out here running on rooftops, running shoulder first through doors and windows, doing the quick time event combo on 3 versus 1 takedowns — in the words of King Kendrick, “WE GONNA BE ALRIGHT!”

Elba is Sean Briar, a CIA agent that chases down and then works with young con artist Michael Mason, played by Richard I-left-my-direwolf-in-my-other-franchise Madden. They’re trying to stop a terrorist plot that seems to be aimed at protesters on Bastille Day (tell me more).

Yo, there’s a reason why fans want to cast Idris in every gotdamn thing. Look at how versatile this dude be? Suited up, behind a desk, in the field action shots, handling the armed weaponry with ease and dripping charisma like perspiration. Come on now. Maybe growing up as a British actor, Elba’s dream is still to play Bond, or maybe, he like fuck it, I’m over here now. Provided this movie isn’t a trainwreck for some reason, I can’t see any reason why CIA Agent Sean Briar can’t get sequels. Bruh… if Liam Neeson can ride out three movies by traveling back to the same countries his family members keep getting kidnapped in, then Idris can run around Europe foiling plots and stopping terrorism for the next 4+ years.

April 22nd ain’t that far away, so I’m all about this Blackness getting Blackness all over the damn place and saving lives in the process. ‘Cuz ain’t that what Blackness is? Foiling terrorism? You better get on board before Agent Briar roll up on you with the blackjack and do work.