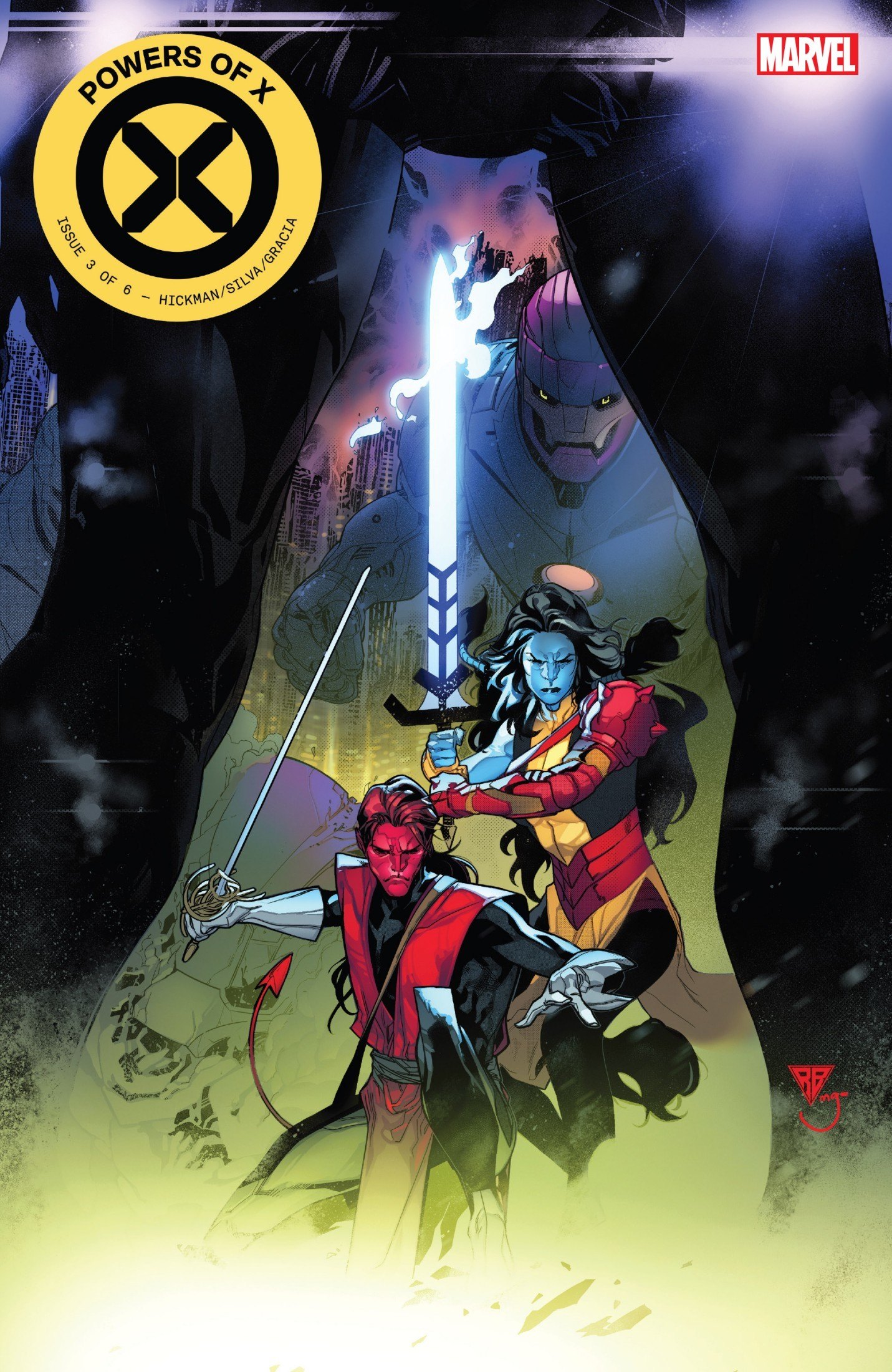 If you are just now joining us, current Don of all mutantdom Jonanthan Hickman is holding court on how to tell proper X-Men stories. Please take a seat and try not to drool on the floor. Powers of X #3 breaks the timeline-jumping structure of the previous two issues for a well-timed and streamlined installment. It is minimal on the interstitial meta-page info, but overflowing with revelations and the smackdown of the year that we had no idea we needed – APOCALYPSE vs. NIMROD.

Of all the brutal X-Men future dystopias to come, Powers of X already stands as both the most beautifully crafted and tragic. Instead of breaking or ignoring continuity for his own purposes, Hickman peels back the timelines and zooms in on a thousand-year continuity that elaborates upon both the beginning and end. This issue moves with more immediacy than either of the previous installments as a small team of X-Men crash a ceremony by the Church of Ascendancy.  While the ministers of the church spout the dominance of machines as they infect a human infant with the techno-organic disease, “the last X-Men” — Xorn, Rasputin, Cardinal, and North — arrive on the scene as a diversionary tactic for their core team – Apocalypse, Wolverine, and Krakoa. They lay waste to the church and take out priests, eventually drawing the attention of Nimrod’s right-hand femme-machine killer and a horde of Sentinels. Meanwhile, using the chaos to their advantage, Apocalypse and his team infiltrate Nimrod’s data mines. Such an intrusion, however, finally draws the attention of Nimrod himself.  More powerful than he has ever been shown, Nimrod duplicates himself into three as he smacks around Apocalypse like a Beta mutant in training.  This sacrifice allows Wolverine and Krakoa to recover and transport the one piece of information that will potentially give the mutants a chance in winning the war. 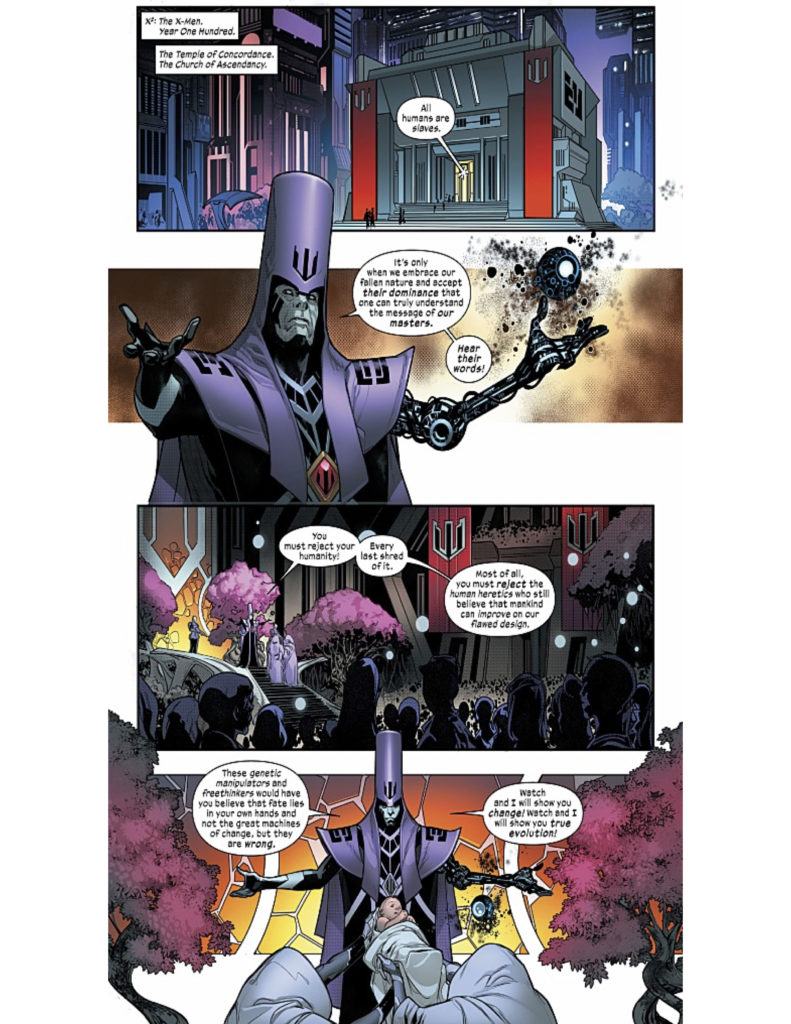 Literally, this is the most explosive issue of both House of X and Powers of X to date.  Not only do we finally get to see Xorn’s mutant powers fully unleashed, but we learn that the team led by Apocalypse are not actually X-Men anymore, but rather his fabled Horseman. Wolverine, the O.G. James Logan Howlett, is War; Xorn is Death; North, the mutant who is a 2nd gen hybrid of Lorna Dane and Emma Frost, operates as Pestilence; and Famine is none other than the symbiotic mutant formed by Krakoa and Cypher.  The remainder of the team, Rasputin and Cardinal, are 3rd-generation hybrids known as Chimeras – each harnessing (for better or worse) a combination of the abilities and predispositions of their original gene-holders.  Cardinal, for instance, is a natural pacifist, but after eating an “apocalypse seed,” he suppresses his natural inclinations in order to kill for the greater good of survival.  As crafted by artist R.B. Silva and colorist Marte Garcia, every page bursts with kinetic detail and emotional weight. Every panel counts – the silences, the pauses, and even the repetitions.  Beautifully paced and skillfully rendered, Powers of X is easy on the eyes, and worth multiple studies to appreciate the power in these pages. 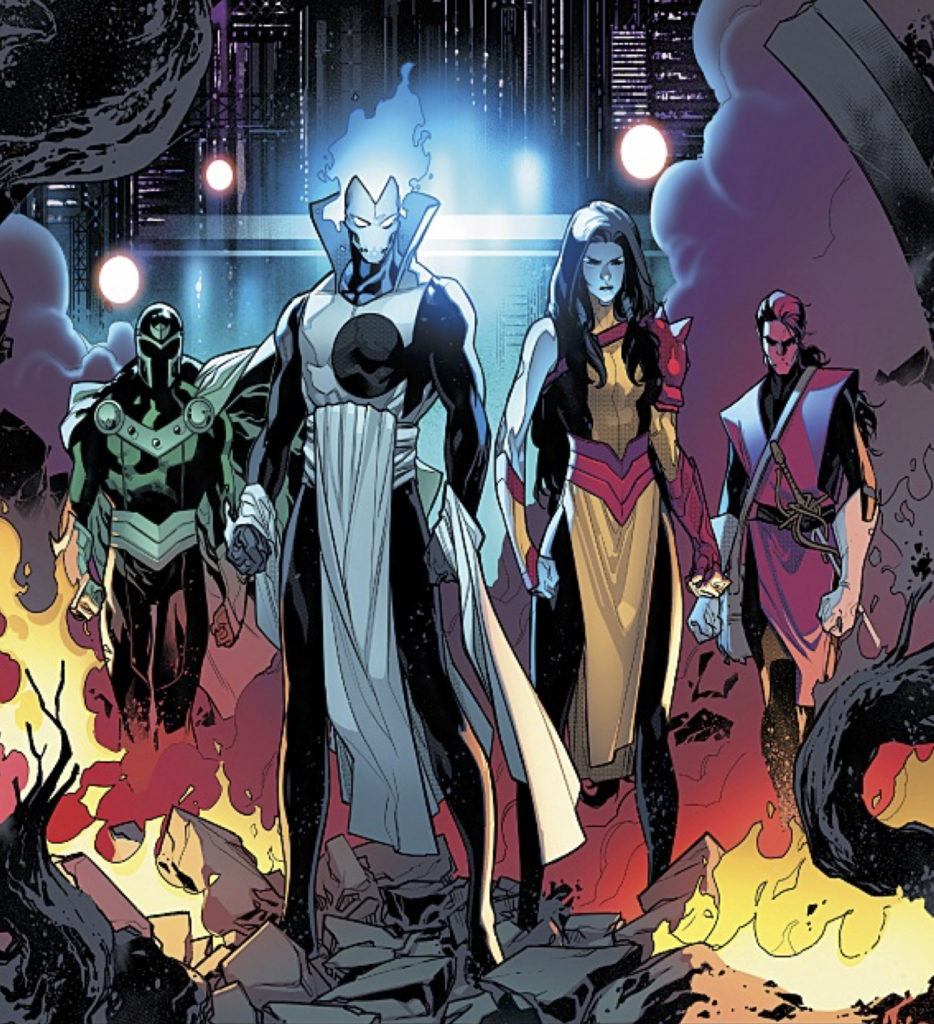 Cover to cover, this issues slaps harder than Empire Strikes Back meets Enter the 36 Chambers (the album or the film. You choose.)  The cliffhanger that closes out the final pages weaves immediately back into House of X, so you would be a fool not to read both of these series.

Rating: 10 out of 10 Singularities