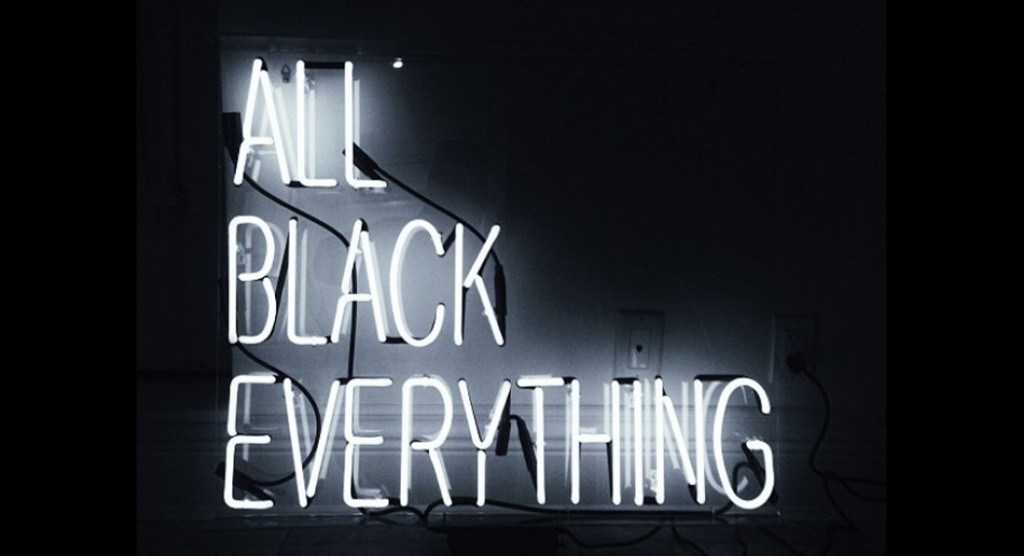 I finished watching The Wire recently and it feels like I just got done with a marathon. I have talked a bit about how I was the shame of my friends for not having known of it when it was big back in the early 2000’s — what I didn’t talk about, however, is that whenever I stated that I wasn’t aware of the show, my Black friends would joke about my Black Card being revoked or having it be up for renewal, which led me to to a weird realization: have you ever noticed how there there is no breakdown for what defines the Black Card?

I’m talking about how it works, what truly makes up the mechanics of the card itself… there is no pie chart whatsoever. The Black Card is referred to in passing among us as this totem that each Black person acquires at birth. Unless you’re biracial, in which case some would (incorrectly) say that you have to earn it. Listen, this isn’t a wolf ticket I’m buying or selling because that’s just segregation amongst each other. A lighter complexion doesn’t mean you need to get put on a waiting list, because that one-drop rule was made just for the occasion of keeping passing folk out. Trust that discrimination will find your ass REGARDLESS. Being biracial doesn’t stop you from claiming that Black Card as your birthright.

Fact is, that’s mostly what we know of the Black Card, isn’t it? That it’s our birthright, right? And in order to maintain it the rules state that one must keep it real, one hunned, and Black. Now the question comes in “keeping it real”: does it mean to yourself, your culture, or both simultaneously? Do the needs of Black culture outweigh the deed to who you are? And how does this all get measured onto your Black Card? That’s the tricky part.

For example, grits are Black as fuck right? That’s a given. Blackest night of my life was eating catfish and grits in Harlem while listening to Tupac’s “Ambitionz Az A Ridah” playin’ in the background. Personally, I don’t like grits, my sister fucking LOVES ’em (she is Black and Tamil). Does that take away from my Blackness? Does her Blackness outweigh mine? Does me knowing the vernacular for and the location of “the kitchen” redeem my Black Card for a stamp of approval now?

Now how about the side of the Black Card where the needs of the culture outweigh your own? It isn’t until recent years that I realized the time spent with my father was him raising me as a Black militant-as-fuck person from day one. We weren’t talking basketball, soul music, or movies. Every single second of my time spent with that man was filled in Black history, not just in America — I’m talking worldwide. In hindsight, it seems that to my father this excessive amount of knowledge and culture outweighed everything else. My father wanted his child, his Black child, to know these facts about the Black people and culture that we stemmed from. Possessing this knowledge of Black culture and history was worth more than my need for what I thought father/son bonding looked like.

“I might not have thrown a football with you but I made sure you knew what you come from, who you are…” -Dad

See, some envision the Black Card as a punch card where unlocking certain things (for example, knowing the location of “the kitchen” or the lyrics to a song in The Wiz) earns a stamp of approval on the card. I never saw it as that. To me, it’s this badge that you’re given, right? The Black Card is always with you and materializes whenever you level-up. It informs you of your clearance grade. To me nothing is ever deducted from you (because the world does that for us daily [more on that later]) you can only level up with experience points. And the knowledge which acts as your experience and is used to level you up isn’t up for scrutiny, because I may not gain the experience points of having seen the show Oz but I know who Imhotep is, that he is regarded as the father of medicine, a poet, and a polymath, and I can quote him. Does not viewing Oz (fiction) outweigh that knowledge (non-fiction)?

The way I view the Black Card’s experience system is like a video game: if you didn’t complete the Oz TV series viewing mission then you don’t get the experience points that Oz provides or have Oz as an unlocked achievement. Simple, right? It gets more complex when you identify with subcultures. For instance, I identify as a nerd. There is no Nerd Card per-se, but in this subculture, you have to prove how much of a nerd you are as a way of flexing your authenticity because someone will test you.

To be a Black nerd is to be in a subculture within a subculture. It’s ironic as diversity has been scarce creator-wise and character-wise for the longest within certain realms of nerddom, yet to prove I am a nerd, I must be extremely versed in my field of expertise (comic books), the majority of which for the longest time were created by and marketed for cis-gendered White males. But I gotta be knowledgeable on Star Wars (which had like 5 Black people in the galaxy [insert Clone Troopers argument here] but whatever) or Star Trek, in order to prove my nerd cred (I ain’t even bout that space adventure life like that) even though growing up this was seen as a conflict of interest with my Black Card (at least until 2003 when Black Nerd Civil Rights finally got recognized).

My Nerd cred is always going to have to be a skill tree set attached to my Black Card. They can’t be separated. I had a nerd clutch his pearls when I told him I never saw Tron. He said, “Are you serious? You gotta see Tron!” I said, “Man the fuck I look like watching Tron on VHS in 2015, bruh? Fuck Tron, weren’t any digital Black people or people of color up in that watered-down Ghost in the Shell ass game. You know what nerd shit from the 80’s I was fucking with comin’ up? The Last Dragon. Oh, you never heard of it? I’M NOT SURPRISED. Knew your ass ain’t got the glow.” You goin’try and run my Nerd cred, you best select what Game Over title you want as the backdrop at your funeral, ’cause NOT ON MY WATCH.

I’m more prone to get defensive when anyone wants to discredit my nerd. “You’re not a nerd” is a slap in the face because you don’t know the shit I been through repping this subculture in the streets before this shit became chic and cool, muh-fucka. I earned these stripes. Now when another Black person says, “I’ma have to check your Black Card” or threatens that you’ll have it revoked, it’s all in jest, a way of saying that you’ve been caught slipping on something you should be hip to because Black culture has embraced and cosigned it. (Obviously, there are some that may mean that statement maliciously, I don’t gloss over that or pretend it doesn’t occur.)

Now let a White “peer” try to say that same thing or the dreaded “You’re not really Black” catchphrase, (they’ll swear it’s all in jest) which they honestly have no right to say. The initial instinct, with me at least, has always been, “Who the fuck are you to tell me about being Black?” Odds are if you are Black and come off as nerd in a way that some White folk perceive as unconventional for Black people then you have heard the “You’re not Black” critique or the ever inescapable, “I’m blacker than you are”.

I was in South Africa and had a white dude say to me, as a joke because I’m American, “I’m more African than you are.” Now obviously it was said in jest, but the bite is still the same because what do we say about the relationship between the truth and jest? Y’all know it. The most frustrating part is that I’m literally in one of the 55 sovereign countries located in the continent I’ve been told to go back to a number of times in my life, and even here I’m “not Black” enough. Of course, I could point out that being a citizen of South African via colonization (vintage gentrification) is way different than being African/Black and torn from your home, but you gotta pick your battles so, fuck me, right? (Plus I looked up and saw Mufasa telling me, “I know. I know… Just let this one go.”)

I’ll charge that shit to the Black Card ’cause ignorant comments (real-life or online) MUST count as experience points. I don’t care, I don’t care, I don’t fucking care. As far as I’m concerned, when Black folk start growing grey hair, that’s not age catching up, or even stress, that’s you physically leveling the fuck up from having to deal with systemic oppression’s fuckshit on the regular. I had to listen to a dude (darker than me) explain why he rides for All Lives Matter AND THEN STATE FOUR SENTENCES LATER IN REGARDS TO POLICE RACIAL PROFILING: “Come on, I’m blacker than you (meant complexion wise). I know it can happen to me.”

SUN, by the time I was done explaining how the “too” is implied in Black Lives Matter (too) and walked out of that conversation I had enough experience points to reach a level that I shouldn’t be able to get to till I was damn near in my 50’s AT LEAST. The Black Card isn’t a ranking system for how Black you are and will become… no, more than anything it’s a fucking gauge for all the shit you’ve been through, will go through, and have yet to go through in the world.

I used to think there was a +999 cap on the Black Card, that there is some final level where you reach Morgan Freeman-level clearance and then Iram of the Pillars rises from the depths before you, you enter another dimension and walk through elaborate halls where eons of Black history, African culture, and scriptures not forgotten but hidden away from the world, only for those who have reached the final stage of blackness thrive, then the ghosts of Toussaint Louverture, Henrietta Lacks, Audre Lorde, and Uncle Phil appear before you as a figure in the distance walks down a spiral staircase in the shadows while slow clapping then steps forward into the light revealing himself to be none other than Samuel L. Jackson, and he says, “Congratulations mother fucker, you’ve reached the ultimate stage of Blackness… peak muh fucking Blackness.”

Except there is not, I repeat, there is not a cap on the Black Card. You’ll continue to gather experience points, continue to level up, because the needs of Black culture outweigh whatever want or desire you have or need. That’s not for us; never for people like us.