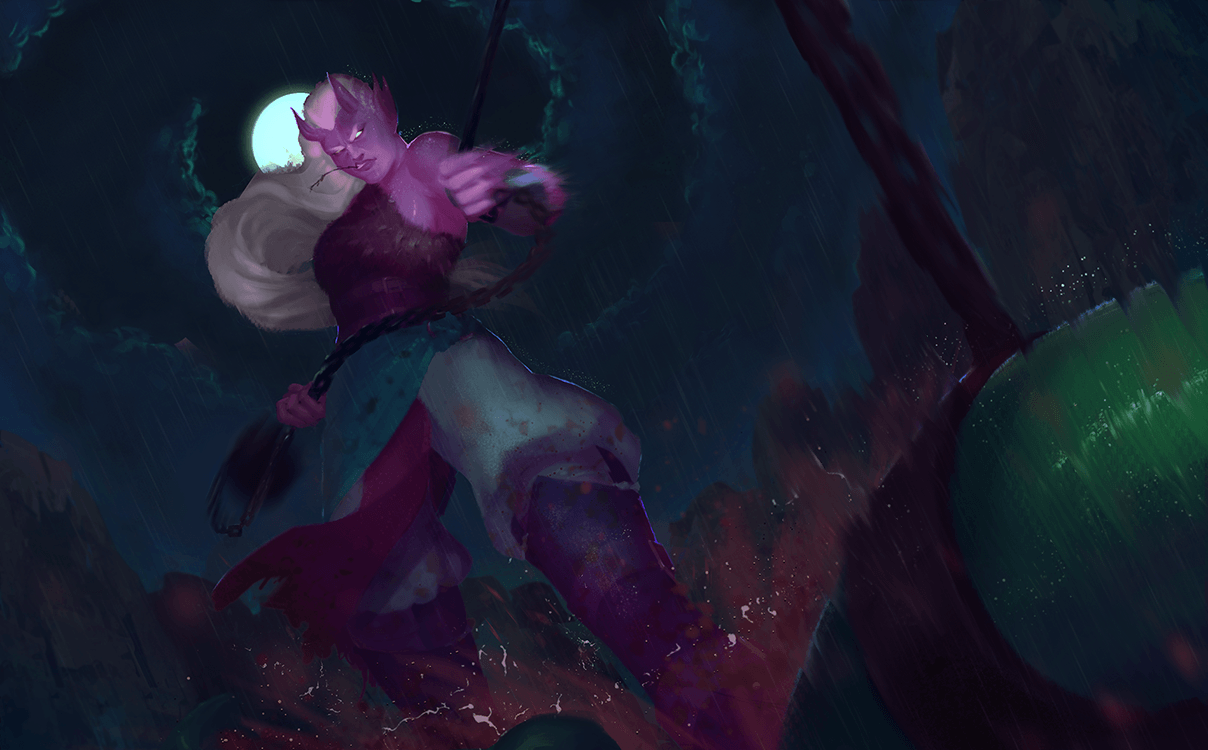 I had first came across Deni’s artwork sometime late last year scrolling through Tumblr. You can almost drown in the sea of pieces of digital art on that site but several of her illustations caught my eye, so much so that I followed her and found a new appreciation for concept art and a new understanding for the people who create it. I’m so grateful that I’ve received an opportunity to get to know her better and share her with you!

Black Nerd Problems: So you’re an illustrator, with some really cool concept art in your body of work. When did you know that this was what you wanted to do for a living? Did you face any particular hardships when you decided?

Deni Dimochka: Thank you! It sounds weird but I knew what I wanted to do after I saw Shin Angyo Onshi. I thought the animation and the manhwa were ridiculously phenomenal! I replayed that one scene of a brainwashed Sando lunging for Munsu with her huge ass sword like a million times in high school and it was that one scene that made me want to do this. Originally I was a 2D animation major and while I still love animating, the industry did change.

2D animation itself changed and it was either stick with it and give up so many of the other things I originally loved about it or find something else, so I had to figure out something else. Eventually that lead me to concept art and that branched off to digital illustration as well. There was really no plan B, because there’s literally nothing else I’m good at and nothing else I’m even remotely interested in. I consider myself incredibly fortunate to somehow be able to do what I want to do and for whatever lucky reason not end up selling riddles under an bridge like some weird riddle peddler. 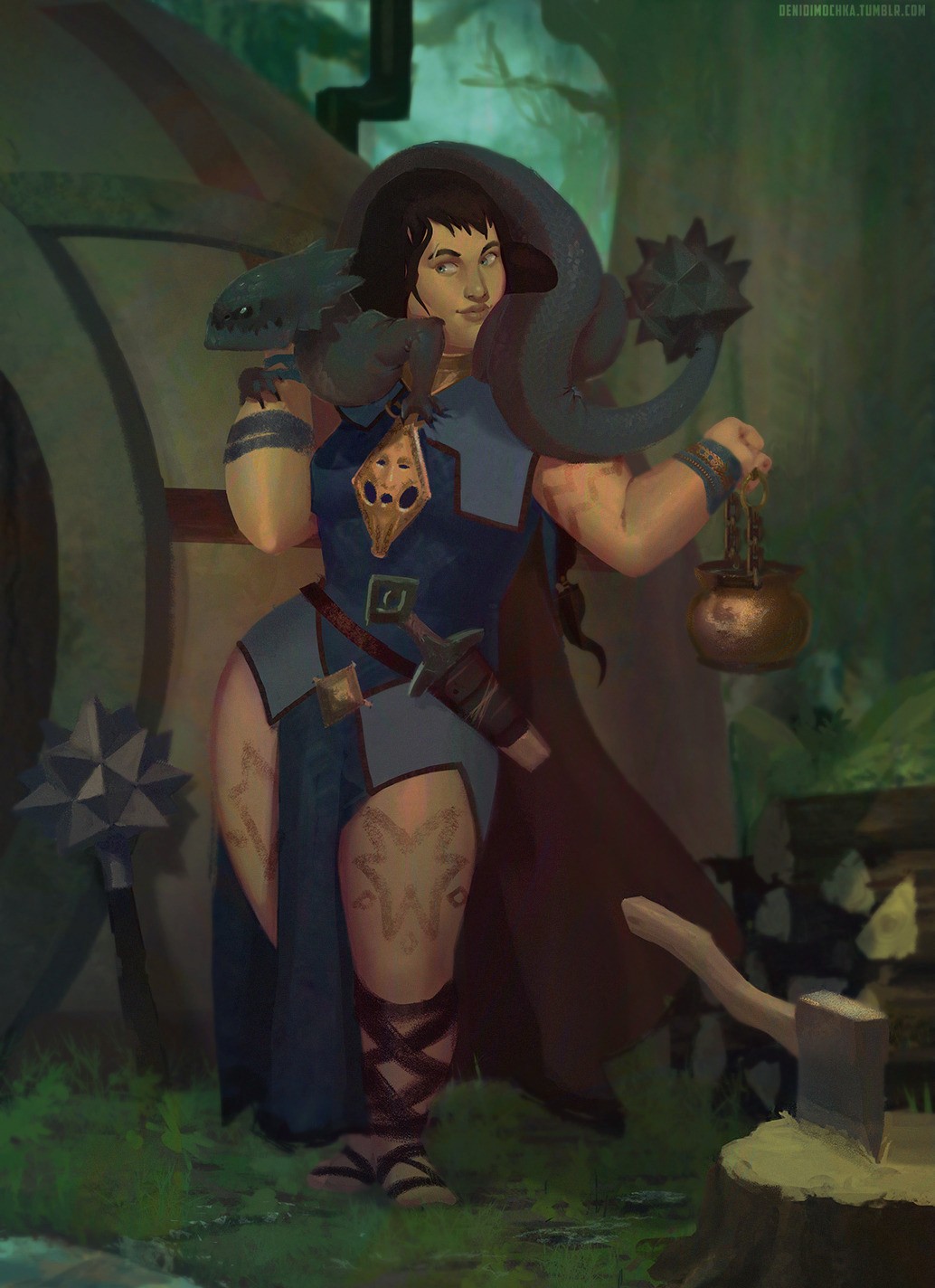 BNP: I see women as many of the subjects of the art you create: brown-skinned women, fuller figured women, alien looking women, women who look to be hybrid creatures types, even women who look like they’ve come off the pages of fairy tales. Why is it important to have representation of different body types and ethnicities of women present in art today? 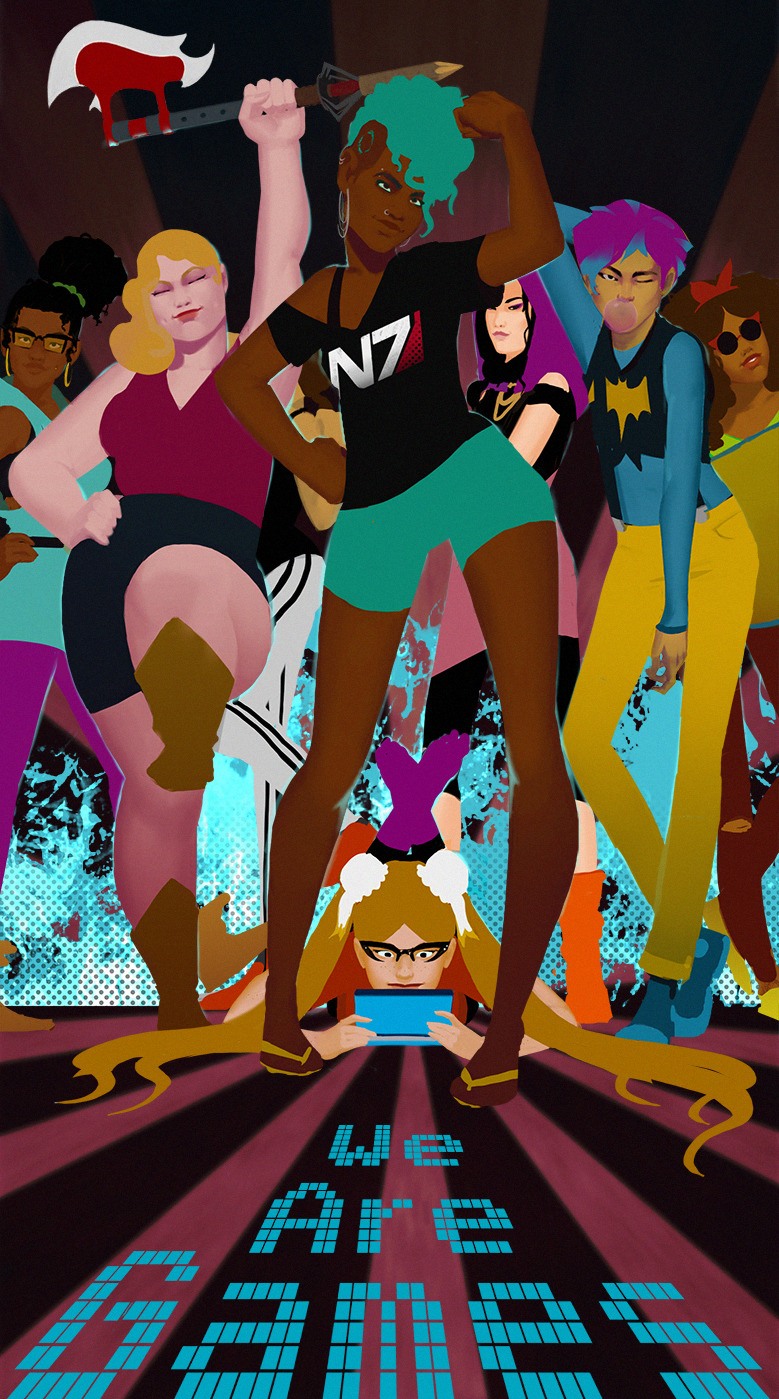 Deni : That’s a good question. Honestly, if you lived outside the U.S. and knew nothing about the country apart from the media it puts out you would think the whole demographic was 93% white men and 7% thin white women who are born 22 and mysteriously die off at 33. We need and have a hunger for accurate representation, accurate cultures, accurate colors, accurate bodies and sexualities in the art, media and literature we’re consuming. It’s 2015 and being racially literate, inclusive, and respectful is the responsibility of every artist. I’ve been replaying the Mass Effect trilogy with my boyfriend right now and how are there 7 scrollable pages of color pallets to paint your armor with but only two shades of brown for your own skin? How did that design decision continuously make it through? I really hope they fix that in Andromeda.

BNP:  Are there any important comics, films, or other art forms that helped shape your art style and influence the artist you are today?

Deni: Being a shy nerdy kid I nourished myself on X-Men, Fanfiction.net, Buffy the Vampire Slayer, and Moltar’s Toonami lineup. Shows like Sailor Moon, Dragon Ball, Samurai Champloo, and Big O (before it got too into making me question my existence) gave me a passion for animation and storytelling. I don’t know if they influenced my style but they definitely inspired me to become a creator and start working towards putting out my own stuff.

Style-wise I’m really just working on doing my own thing, and figuring out what that thing is. I absolutely fan out on other artists but I always want to take that fan-girling and use it to help me do my work my own way. I’m never going to be Jason Chan, or Alex Zhang, or Caroline Gariba, etc., and that’s okay because they’re amazing at doing what they do and with time I’ll be amazing at doing what I do too. Hopefully, lol. 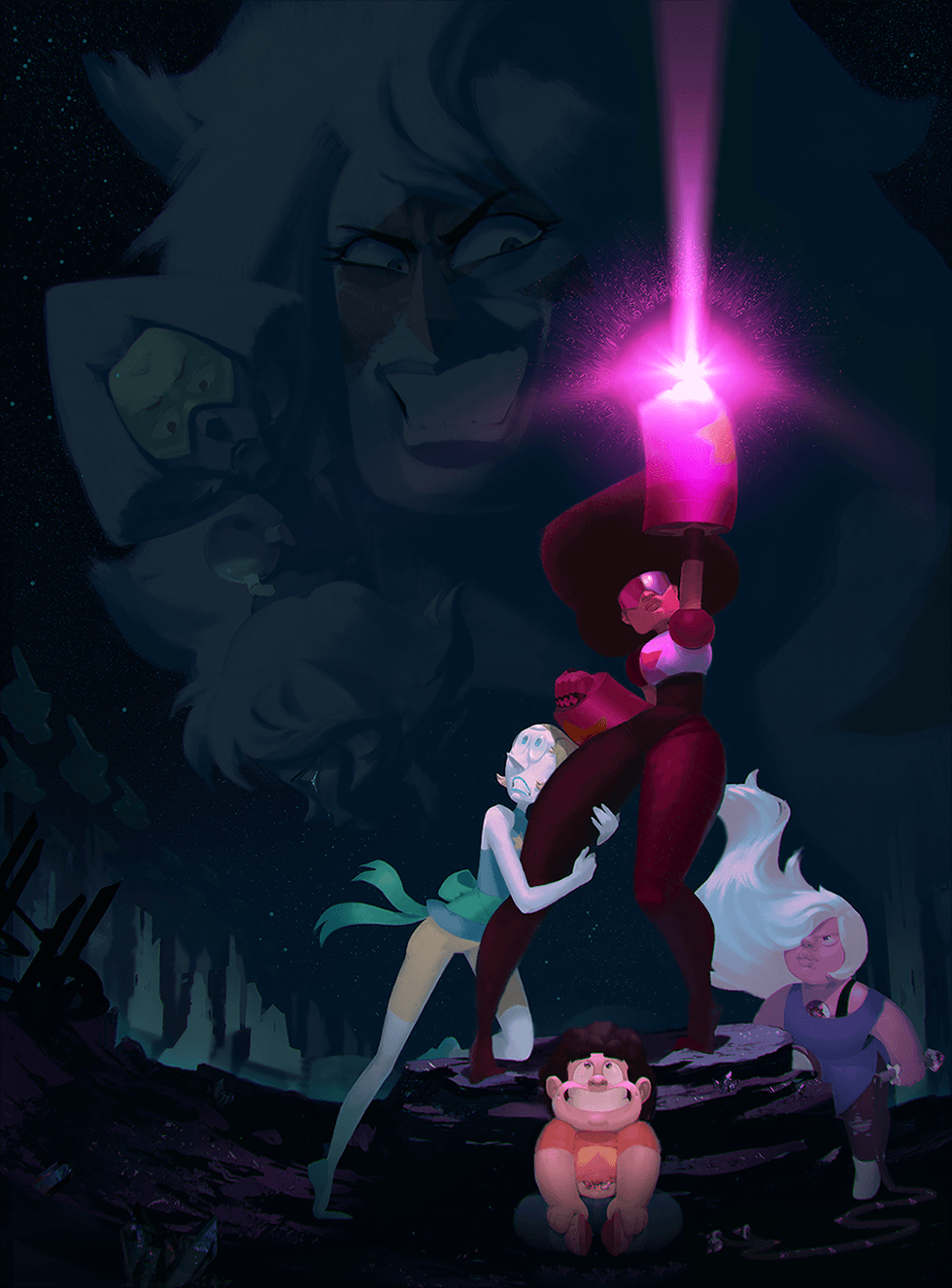 BNP: Is there anything you’d like to see change in the artist community? How about how people approach artists? Freelancing? Emailing them?

Deni: Given that the last time I was on Artstation I was 161 images into the trending section before I finally got to a single one depicting a POC, I would say thats a sign that mentalities need to change. I wish the ‘same but slightly different’ approach to art and storytelling wasn’t so prevalent with clients. The whole ‘I want an original take on a fighter mech. Something vibrant that stands out and really connects, but make it like Titanfall,’ ‘I want this guy to be unique. He’s angry, with a dark past and a perverted sense of honor, but make him like Kratos.‘ Jeezum, yeah, I think the community could do with less of that.

Everyone’s portfolios start looking identical and suddenly it doesn’t matter who you’re working with because the client can find 5 different artists just like you. As far as approaching artists go, pretend like you’re doing it in real life. Don’t say anything you wouldn’t say in person and be as respectful as you would in someone’s professional office. Kyle Webster’s “How to Email an Illustrator” is the best guide I’ve found. I don’t think I can really add too much to that.

BNP: Is there anyone more precious than Clementine (of The Walking Dead video games)? 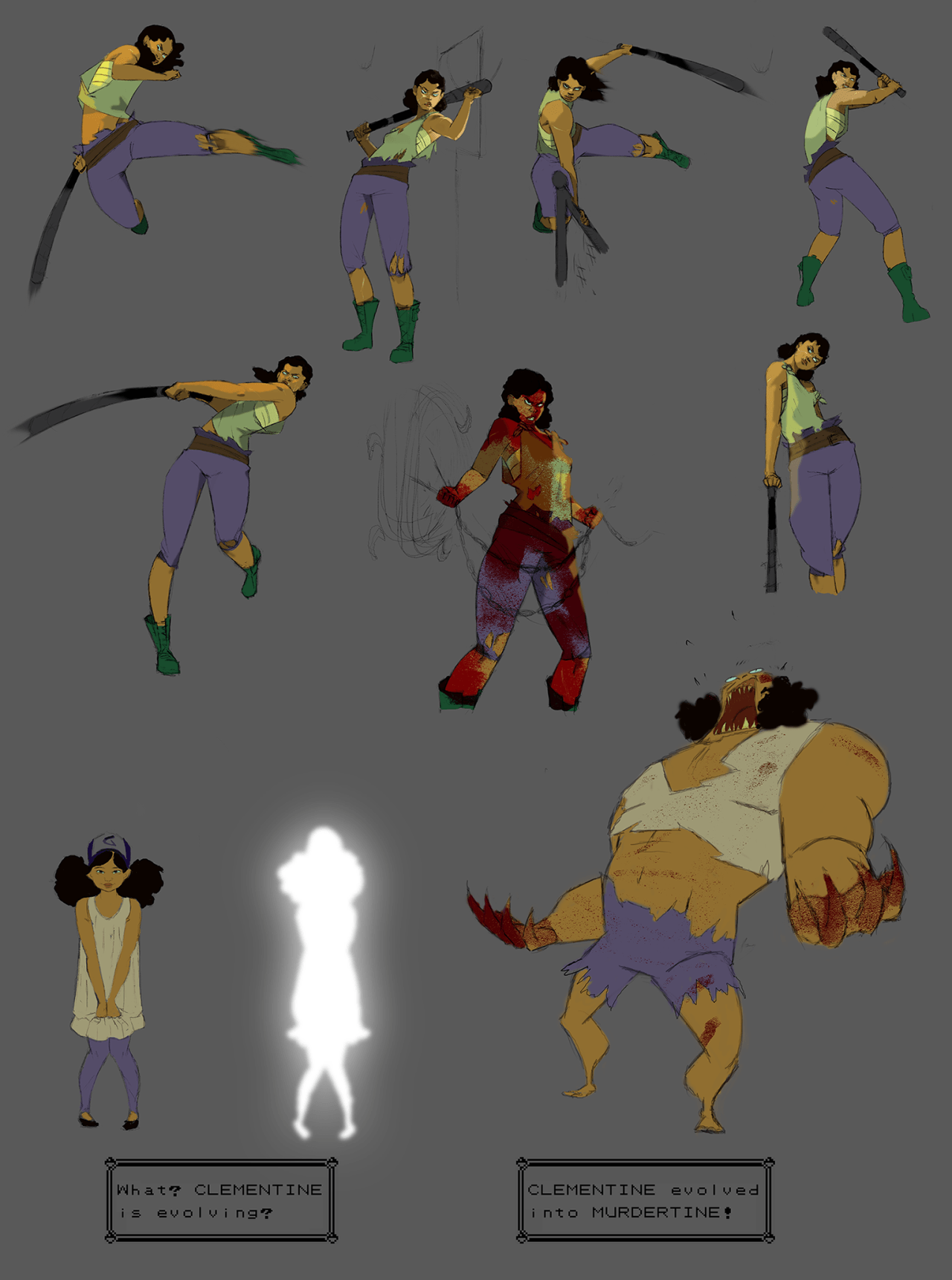 Deni: I need there to be a sequel a few years later called “The Walking Dead: Murdertine.” Clementine as an adult, having been one of the few kids who actually got to grow up in the zombie apocalypse. Was anyone else freaked out that this baby basically had to become a mom at 10 years old? Poor little AJ. You know what, poor everybody, it’s the apocalypse.

BNP: A lot of your work is other worldly. Where do you go mentally to gain such inspiration to create such pieces?

Deni: I’m not too sure. I don’t know if there’s any one place I go to mentally. I approach most of my illustrations as fanart for some game/comic/cartoon I haven’t created yet. The Flower Centaur and Flowerpillar were giant monsters you meet in the woods of this surreal Alice in Wonderland game. The Good Fortune Demons in front of the giant koi fish I imagined being these ancient demon sisters who appear to desperate people tempting them with monkey paw wishes. If you’re working on an illustration make sure you figure out exactly what’s going on but then leave out 20% of that information, that way it makes the piece feel like part of a bigger story. 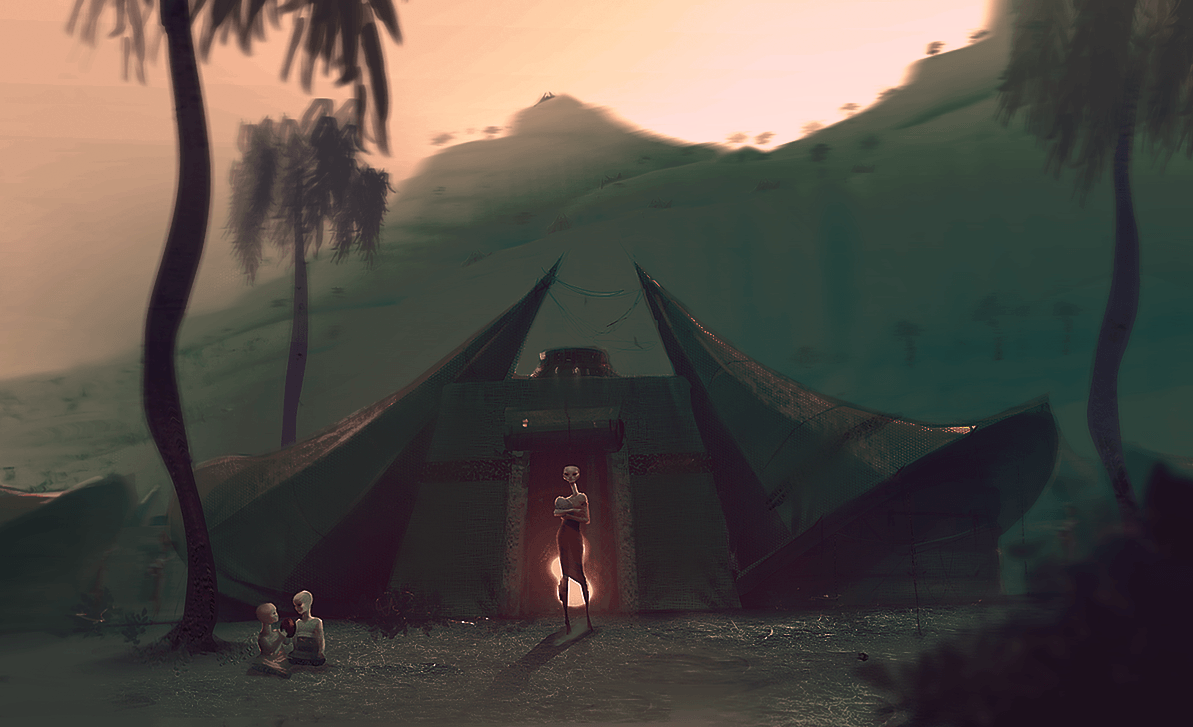 BNP: I know we’ve both had some feels over the 3 A.M. Dangerous Zone manga ending. You’ve recently picked the manwha/web comic Cheese in the Trap back up (I’m in season three right now and I’m NOT OKAY AT ALL). Any other comics or reading material that’s caught your attention?

Deni: Being sort of an adult with sort of adult-type responsibilities has kept me from the comic store so I’ve really been digging on webcomics. Heather Campbell ‘s working on the Team Fortress comic and I’ve been a mega fan of hers since her Harry Potter fan art days.Tracy J Butler’s “Lackadaisy” is unbelievable and I’m so stoked she’s getting to do it full time now! I really need to get on Saga and Bitch Planet, those look fantastic. With Manga, I’ve been following Hourou Musuko and Oboreru Knife, both have such complicated characters and deep storylines.

I do want to see more manga geared towards an older demographic though. Manga was a playground for me when I was in high school myself but now I’m almost 30 and I need to see a chick paying some bills and having an existential crisis. That’s why Cheese in the Trap is so easy to get into. You’re reading and its like ‘Oh my God, she’s broke as ish? I’m broke as ish!’ and ‘Oh my God, Sul has no idea what she’s doing with her life? I have no idea what I’m doing with my life! I’m feeling vulnerable, how dare she know me like this!’

BNP: Any future projects coming up? Anything you can share?

Deni: I do have something to share that I’m pretty excited about! I have an upcoming webcomic called “Vorgahn the Conqueror,” she’s the lovely sci-fi lady with the blue hair and orange jumpsuit. Vorgahn is one of many descendants of the few countries that made it off earth and, with some intergalactic help, colonized current homeworld Goldilocks planet: G3 two thousand years ago. Working as a Government ‘Auditor’ she’s sent off to unexplored planets to evaluate their population and decide whether or not they meet the criteria to be invited to join the flourishing Planetary Fellowship that G3 belongs to. 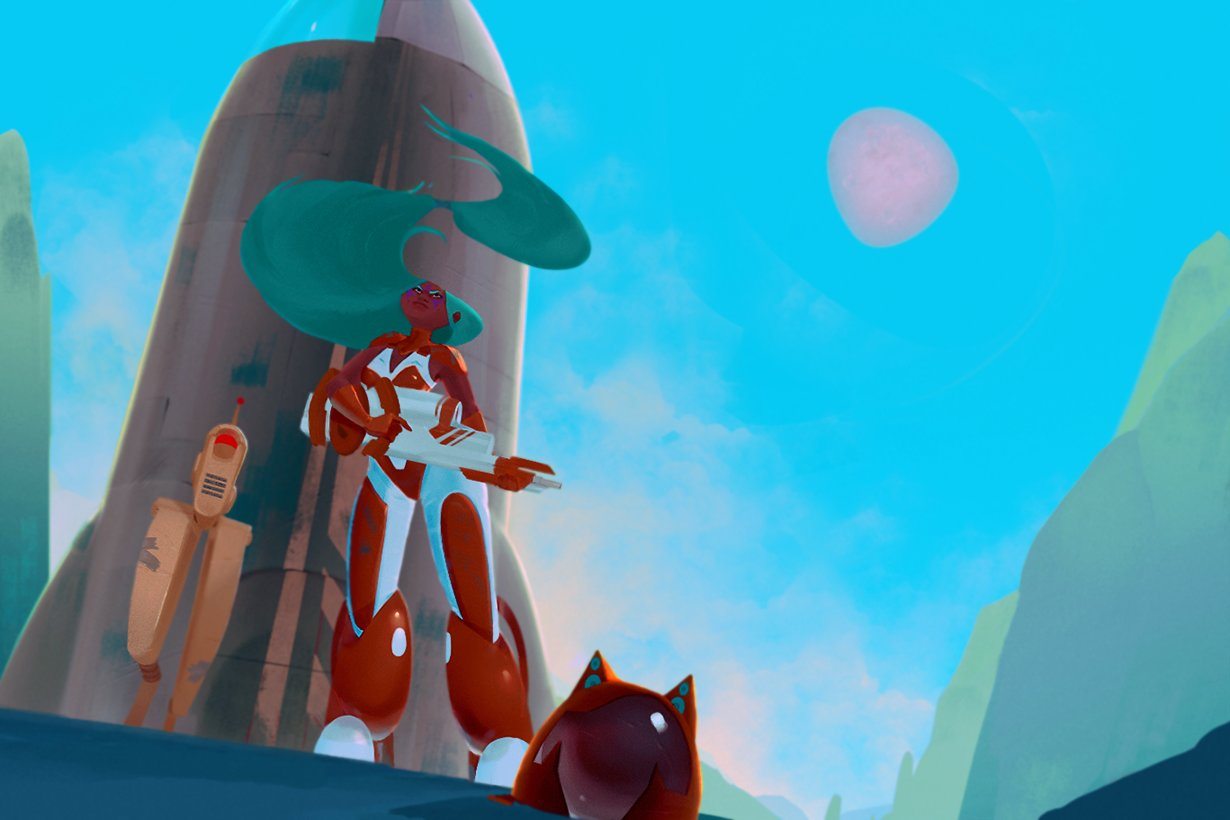 She’s under funded and over worked, her ship is a floating death trap, her AI assistant Z’iebn is held together with hope and duct tape, and even though she hates her job she just isn’t sure what else she should be doing. There’s a lot of action and space exploration, but the biggest theme is how Vorgahn handles her dissatisfaction with where she’s at in life, her long periods of isolation, and most importantly the tough decisions she has to make knowing for many planets she’s their desperate population’s last hope for salvation. The first few pages and lots more visual develpoment work for it will be released this November!

Check out more of Deni’s portfolio here and stay tuned for her webcomic and other projects! 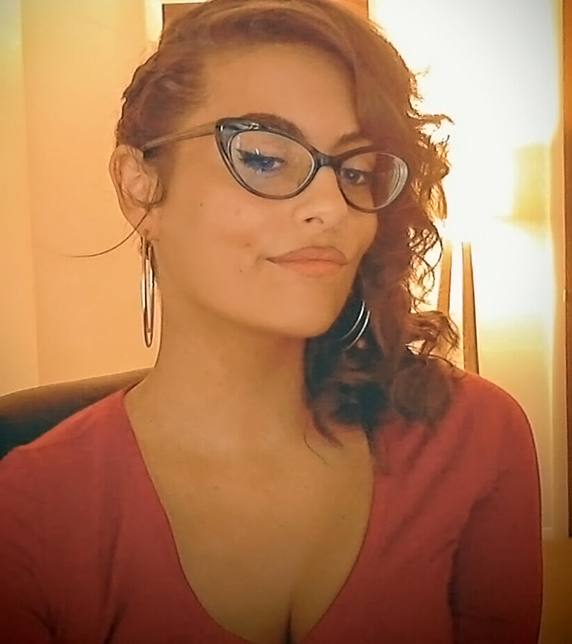