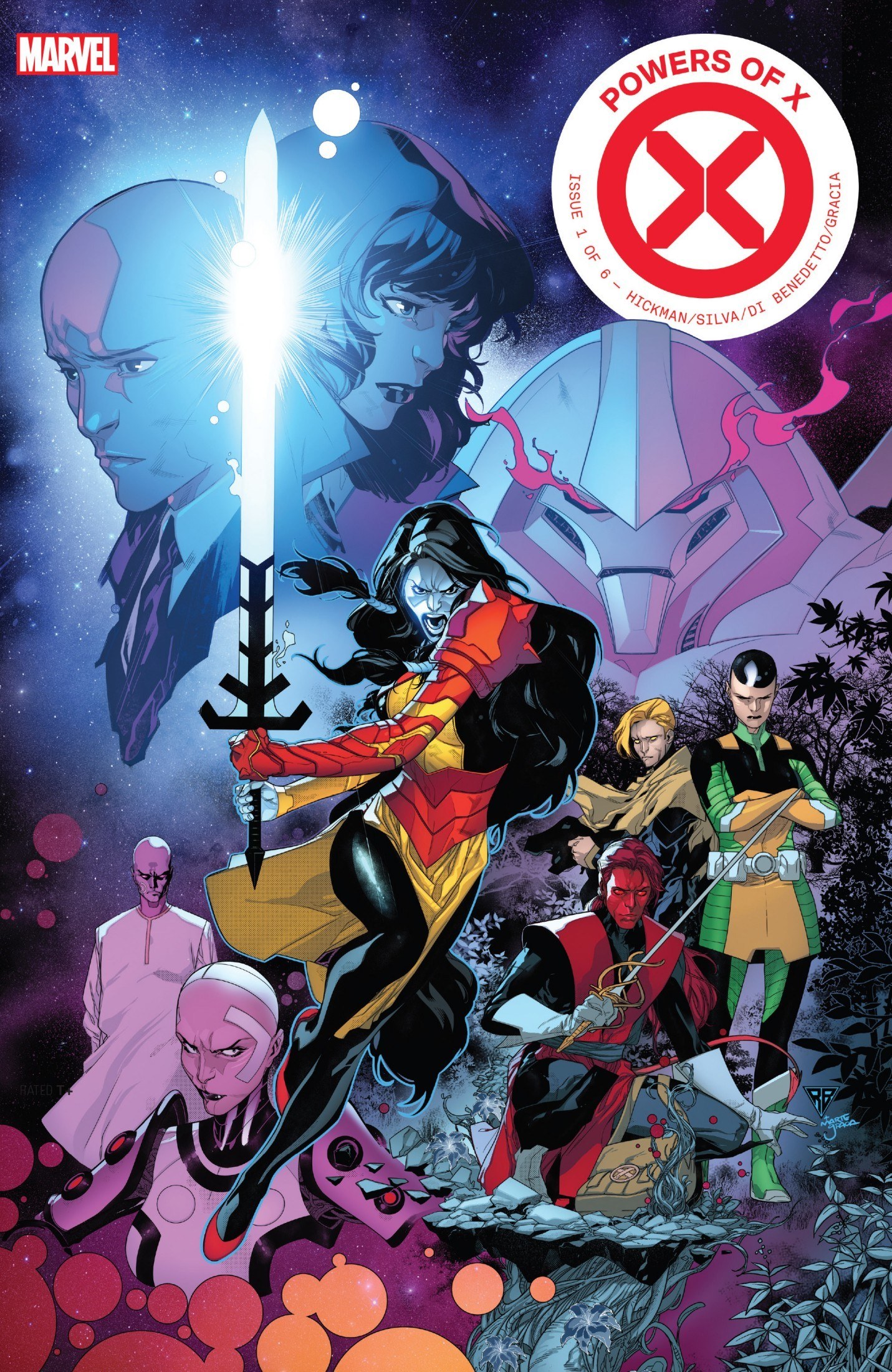 “You’ve forgotten that machines have no soul and that humans lost theirs a long time ago.”

For the official record and all the late students joining us, the correct nomenclature of the new Hickman X-Men series are as follows: House of X is spoken as “House of Ecks” and Powers of X is pronounced as “Powers of Ten.” It feels a bit strange at first, but makes perfect sense in the context of this series – not only does “Power of X” refer to the four timelines in which the story unfolds, but also the eventual evolution and ascension of mutants over humans. 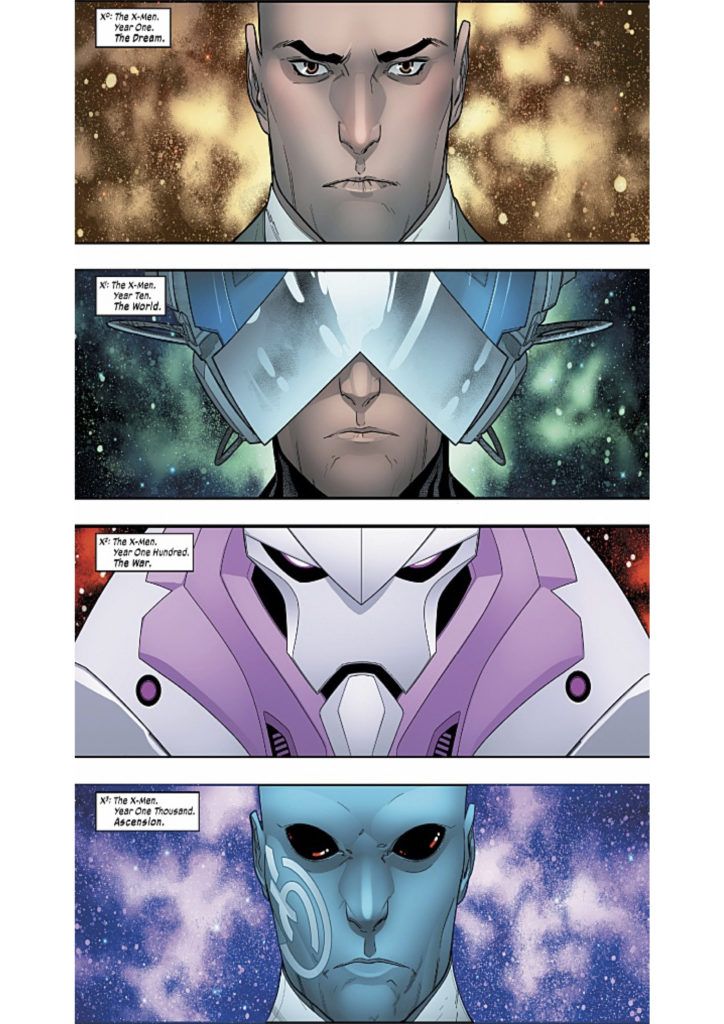 The launch issue of Powers of X reads like Darren Aronofsky’s The Fountain by way of Sergio Leone’s Once Upon a Time in America with an inevitable mutant-man-machine war steering the plot. The issue opens with a young Professor Xavier meeting Moira MacTaggert for the first time at a fair.  She tells him that clearly they were destined to meet after a tarot reading revealed three significant cards to her – The Magician, The Tower, and the Devil.  As the story develops, these cards take on further significance as they are the keys to a future that lies decades beyond them. Meanwhile, in Year Ten (the present) – Mystique and Toad return to the House of K (Krakoa) with a piece of stolen data for Magneto and Xavier to ingest into the mutant homeworld (read House of X #1 to see how this started). Whereas Mystique wants something in return for her trouble, Xavier and Magneto show little patience for her pettiness. Xavier tells her, “We’re building a better world, Mystique. And everyone who would live in it owes something.” One hundred years later, we are thrown in the midst of the mutant-man-machine war as three familiar, yet completely unfamiliar mutants attempt to save a black-brained mutant from Sentinels.  Ultimately, they are unsuccessful in their rescue mission as the mutant referred to as Priest (looking like a Gambit, Nightcrawler, and Azazel composite) refuses to help in the attack due to his pacifism.  On her own in the battle, the mutant known as Rasputin (wielding Magick’s familiar Soul Sword, but with the skin of Colossus), is ultimately defeated and the black-brained mutant is taken. 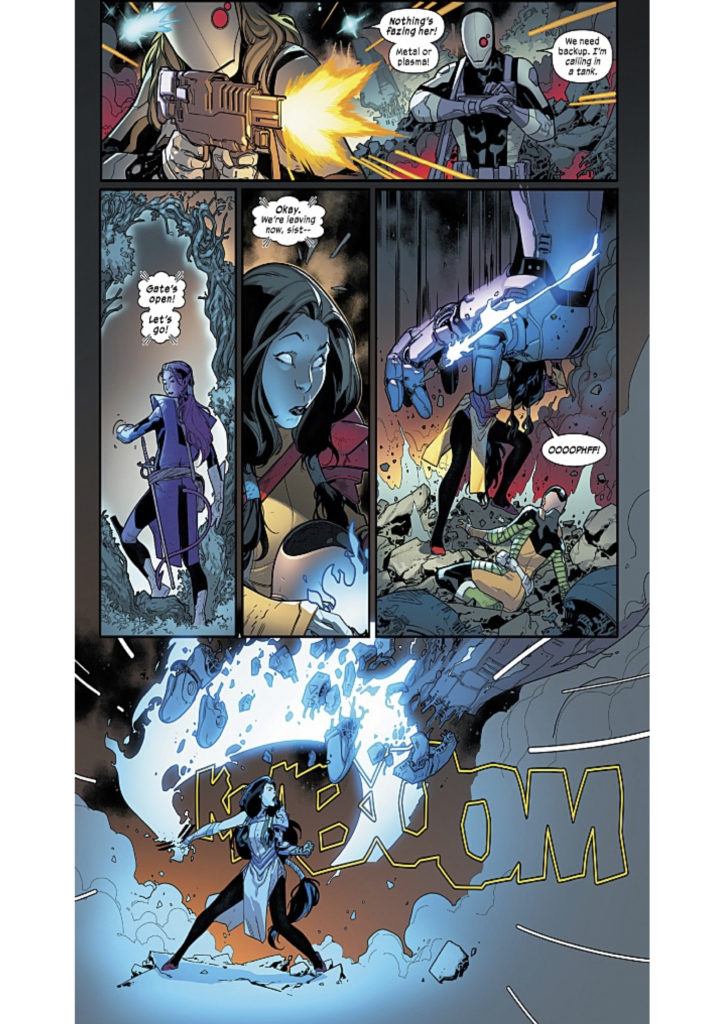 From that point, forget everything you thought you knew about all of the X-Men’s divergent timelines and possible futures. The kidnapped mutant is taken to the leader of the man-machines forces, none other than Super Sentinel Nimrod. As the mutant refuses to give any information willingly, he orders her to be taken to the “baths” – a tube filled with a liquid compound that will essentially break down the mutant into pure data and extract everything she knows without her cooperation. Eerie sh!t with more than a little subtext.  From there, the story hints at a strange new hope 1,000 years in the future where apparently mutants have overcome the oppression of humans, and keep their lesser evolved species in isolated reservations that resemble zoos.  I swear to you, this is just the first issue.

The new Hickman run of X-men in these two mini-series is everything you didn’t know you needed from X-Men storytelling. Most impressive is the way Hickman weaves in the mythology. We become familiar with all-new, all-different classifications of mutant hybrids (Chimeras and Outliers), a mutant breeding program spearhead by Mr. Sinister, and a series of major events that happens off-panel that I hope we can see visualized.  Even more impressive about Hickman’s scripts are how his worlds and plots elevate the artists around him to levels of excitement and kinetic energy that we did not see before.  Artist R.B. Silva, for instance, seemed merely like a B-list backup while drawing the awful-awful-awful X-Men Blue series, but spurned by Hickman’s epic storytelling, this man is turning in some beautiful, nuanced work. Teamwork make the dreamwork indeed.

As someone that has been reading X-Men comics consistently since 1992, I can safely say these new joints by Hickman CRUSH everything that was not written by Claremont, Morrison, or Bendis’ Uncanny run. I may show slight favoritism for anyone with Jon in their names, but I cannot write enough positive adverbs or epithets to make you read this series.  If you like X-Men, comic books, long game mythology and storytelling, then you have absolutely zero excuses not to read House of X and Powers of X as soon as they drop on NCBD.  The first issue of this series ties in four distinct time periods in mutant history that reflect directly upon the “current timeline” as it unfolds in House of X.  You cannot read one of these books without the other to grasp the full scale of what Hickman has in store for a thousand years of X-Men history …yes, a thousands years. Without a doubt, Hickman’s reign on the X-Men already stands as the most exciting title (re)launch since Ta-Nahisi Coates took over Black Panther or James Aaron on Thor. No more talking. Start reading.