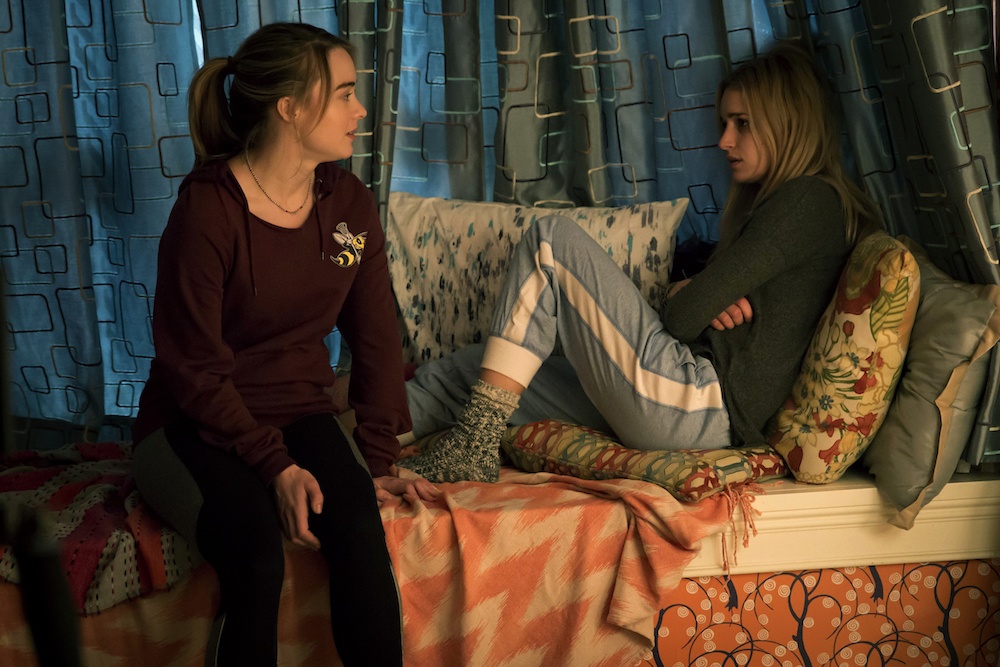 [quote_simple]“And the Lord said, there are spoilers, readeth at thine own will”[/quote_simple]

Whether you were a fan of the old Exorcist movie or not, you’re going to enjoy the premiere of The Exorcist TV show. While it did possess (and I use that term loosely) everything you would expect in a show based on the movie, the big question is: does it make you want more? 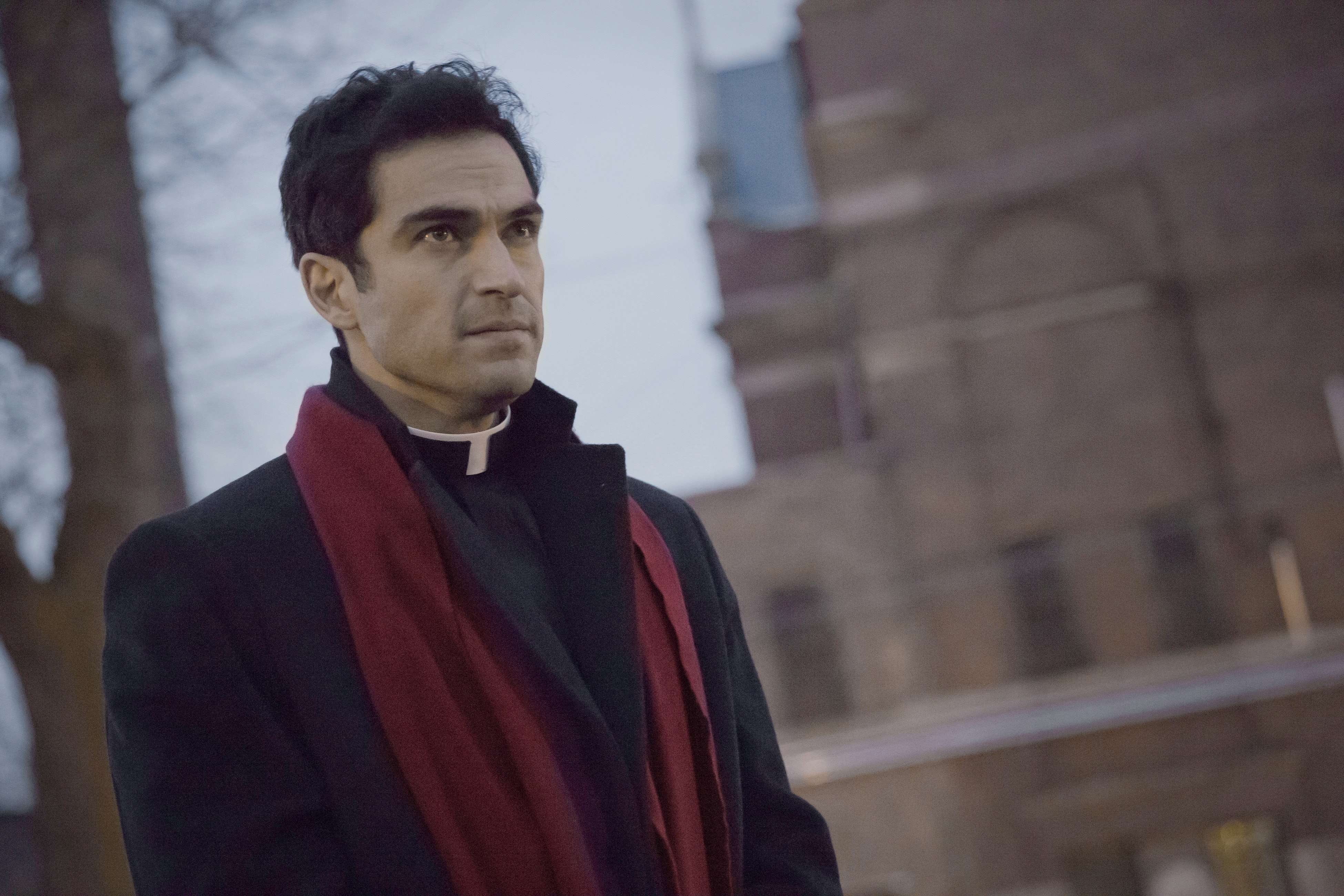 We first meet Father Tomas, who is a priest of St. Anthony’s church in Chicago with enough good luck to be on the cast of Vampire Diaries. We learn a few things about him, such as he’s still in communication with his married ex via mail. I guess it’s better than some awkward text messages… I could just image what that conversation would be like:

We also meet Angela Rance, who is convinced that her daughter Katherine is possessed because of the way she talks, how she looks at her, the fact that she stays in her room and won’t come out. Hmmm, yup, she’s possessed, doesn’t sound like a typical teenage girl to me! Then there’s also the fact that she hears voices, furniture is being moved, etc. (Actually, you know, the last time I had dinner with my family, after we were finished, we pushed our chairs in. The next morning I noticed my chair was moved slightly to the left. I was so scared and immediately thought there was something in our house. Crazy stuff, right? But I digress.)

Father Tomas tries to convince Angela that demons are not real but still agrees to meet with Katherine. Next thing you know, a crow flies into the window faster than the babysitter’s boyfriend when the parents’ car pulls up. If I was Tomas, I would of been like “Look, you need take that mess back to your house. I don’t have time for this, bih.”

We take leap over Trump’s lego-made wall into Mexico City where we meet self-retired exorcist Father Marcus and Father Bennett, brought to you by the good folks of the Vatican. Bennett pays Marcus a visit and gets down his throat for getting out of touch for almost a month. Bennett looks around to see Marcus’ hand and finds a young boy named Gabriel strapped to a bed where Marcus failed to cast out his demon. Bennett demanded that he take Gabriel to the hospital, next thing you know Marcus is like “Surprise mothafuka!” and pulls a gun on Father Bennett. And trust me, he would shoot “Without hesitation.” Weirdly so, Father Tomas had a dream about the whole exorcism and witnessed it as it went on as if he was in the room. It was some Inception shit!

Fast forward to Angela’s house. Father Tomas interrogates Katherine to see if she is possessed, and she assures him that she’s not and that her mom is overreacting. The family and Tomas sit down to have dinner. Tomas tries to strike up a conversation with Angela’s husband Henry who suffers from a brain impairment where Katherine describes him as “a potato.” A little while later while Tomas is heading out, he says his goodbyes to Henry. Henry suddenly has a That’s So Raven psychic moment, telling Henry that Father Marcus is in St. Aquinas. Then poof! Henry went back to “normal” as if nothing ever happened. Sends a few shivers down your spine, huh?

Father Tomas has another vision of Gabriel’s exorcism but this one went batshit crazy! Gabriel develops this weird eye-thing where he has two pupils on one eyeball. This time the demon took over Gabriel’s body, striking the priest and eventually killing Gabriel by snapping his own neck. Tomas decides to go to St. Aquinas in search of Father Marcus. During his search, he has a brief conversation with a man in dark sunglasses named Brother Simon. Father Tomas sees a man from a distance and decides to follow him. When they discover that Simon has the same freaky eyes as Gabriel, shit starts to turn left from there.

Tomas finally stumbles upon Marcus and he was not interested in hearing anything Tomas has to say. He was colder than the prom queen’s shoulder. Tomas got Marcus to listen by confessing that he has “seen” the exorcism he conducted on Gabriel. Father Marcus was like “Look homie, I don’t know what you think you saw. All I know is that you need to mind your effin business. You don’t know what kind of forces you’re messing with. You wouldn’t last a day in my hood.” Father Tomas makes his way back to Angela’s house and he tells her God told him to help her family. Right on cue, they here a strange sound upstairs in the attic. I’m sure Tomas was thinking in his head, “God, why couldn’t you choose someone else for this? I’m not with it.” As they reach the attic, we all expected to see Katherine doing some crazy stuff but instead we find her sister Casey who was looking crazy as hell acting as if she was possessed. But, of course, like in any show we’ve ever seen, as soon as Angela made it upstairs, Casey looked completely normal. We end with Father Tomas leaving the house. He looks up and sees Creepy Casey, (that’s her new name) smile at Tomas from the window. That’s when you know, it’s about to go down!

And that’s it. This show definitely raises a lot of eyebrows and comes with a lot of questions. Why is Creepy Casey the one acting freaky and not Katherine? How will Father Tomas deal with this situation? Is Father Marcus going to get involved? Find out on the next episode of The Exorcist!