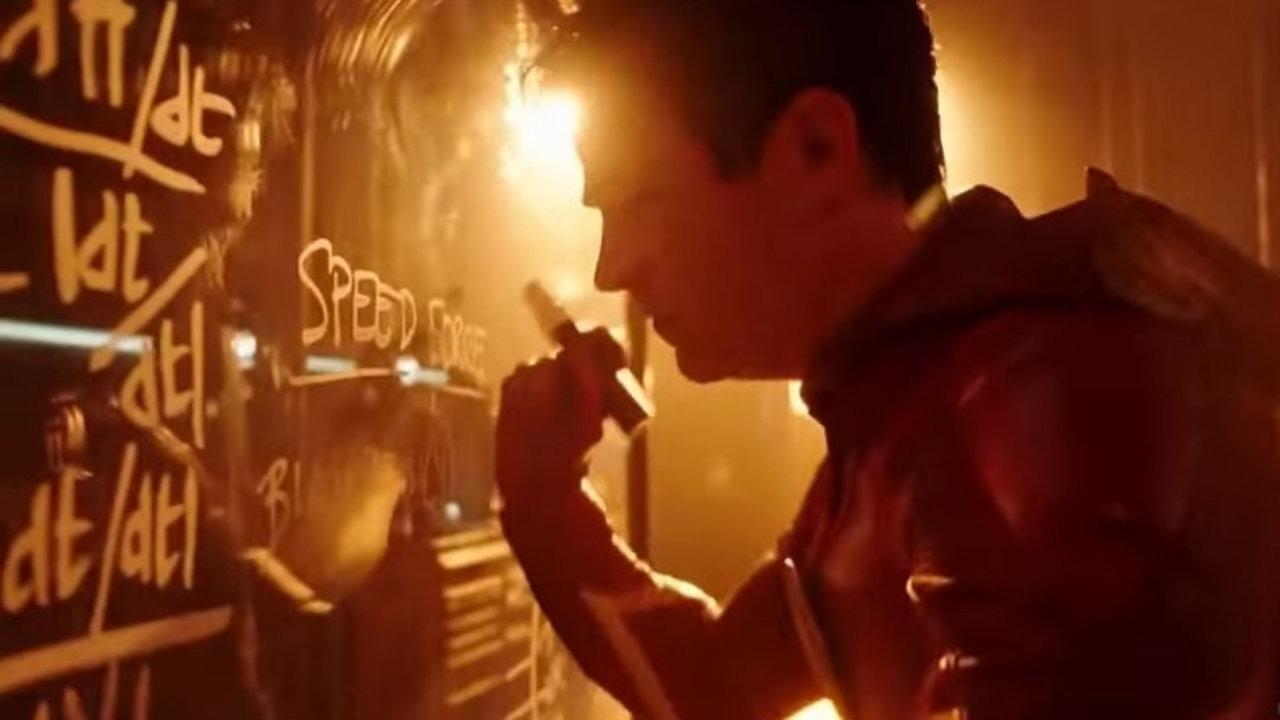 A sweaty and distraught Flash touches Iris who is frozen in place before him. He tells her that she’s moving as fast as he is–and as fast as she was when he effectively stopped time like this when they were in the courtroom during his murder trial.

Yep, this whole episode is a flashback.

Barry is obsessively training, trying to run through one of Cisco’s breaches into a pocket dimension–now that Team Flash has figured out this is how DeVoe moves around so quickly.

Iris and Barry have a chat about how they’re not spending enough quality time together, even though they work together, live together, and sleep together every night. They definitely need a date night.

In the meantime, Harry brings them all to the bridge to talk to them–Cisco has mapped a signature field for each time DeVoe has breached into a pocket dimension. It’s been going on for three years–clearly, this dude thinks in the long term. Cisco turns to head downstairs to get Ralph who’s moved into the Lab (Buddy System in full effect!), but suddenly Jesse is standing there, which scares the crap out of Cisco–“Son of a breach!” 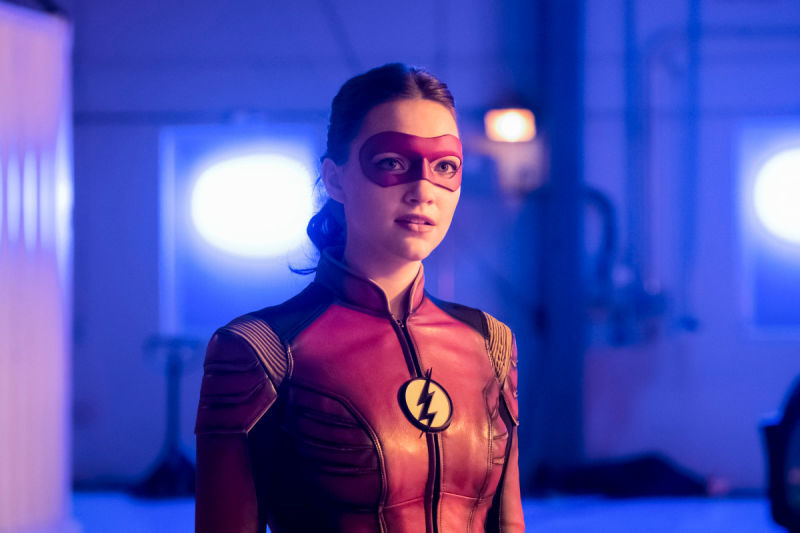 Jesse is expecting an apology from her father, but Harry isn’t quite…there yet. No, he’s still hurt she kicked him off her team. But now, as she walks through his lab, poking at the original version of his Cerebral Inhibitor–“It’s clunky.” “That’s what she said. No, really. That’s what she said”–we learn the real cause of their rift: Harry changed when Jesse’s mother was killed, and he still hasn’t processed his grief. Instead, he’s just angry all the time, looking for distractions like DeVoe, instead of dealing with his feelings of helplessness and guilt about his wife’s death. Even now he refuses–or can’t–talk to Jesse about it, so she turns to leave.

Cut to Joe and other members of the CCPD in a gunfight with a bunch of commandos with machine guns in some sort of hanger at an airfield. They’re determined to get into one of the containers. Joe sends an alert to Team Flash, and the heroes move out. This group is decked out like they work for Black Water, and the cops are taking heavy fire. One of the commandos, a woman, strides to a container and blows it open, then disables the lock on the fancy safe inside, exposing a clear box with what looks like lightning inside. Man, even Marsellus Wallace wouldn’t touch that. Outside, it gets awfully quiet, and when she turns to exit the container, she’s the only one of her crew left standing. Vibe, Killer Frost, Jesse Quick, and The Flash have dispatched the rest. Unfortunately, she’s holding a detonator, and wait–does that say “nuclear”? Oh, shit–that’s a nuclear bomb, and this chick’s already pressed the button. It’s too late.

The Flash freezes time and walks into the container to see what the hell it is, and Jesse joins him–she’s a speeder, too. How long do they have? Can’t run the bomb out of town–that’ll speed up the reaction. Barry sends Jesse off to Earth-Three to find Jay Garrick on the off chance he’ll have a clue what to do. In the meantime, he’s still walking around somewhere in the middle of a nanosecond. He touches Vibe to pull him into Flashtime and show him what they’re up against–a fission engine. Maybe they can breach the bomb to a dead Earth? Vibe’s powers mean bending time and space, and time is effectively stopped in Flashtime, so no dice. Also–and Cisco isn’t a speeder like Jesse; his body can’t handle moving this fast. Barry has to let him go.

The Flash runs back to S.T.A.R. Labs to tell Harry what’s going on–his only suggestion is for Barry to create his own breach and send the bomb into the Speed Force. The question is what will that do to the Speed Force? Will it be okay? Harry basically shrugs; he’s unsure. Just then, Jesse and Garrick show up; Jay points out that if they follow through with Harry’s plan, they may lose the Speed Force. Every speedster in the universe–both good and evil–could lose their powers. But Barry is willing to take that chance to save everyone in Central City.

He and Garrick argue about it, and Barry yells at him, then apologizes. They don’t have any other ideas about how stop this thing, and the only reason they’re not out of time is because as speedsters, they’re kinda “out of” time. Time for a television physics lesson. They could try to neutralize the reaction either with nuclear fusion–not really an option–or…cooling it down. Good thing one of your best friends is a walking Sub Zero refrigerator. 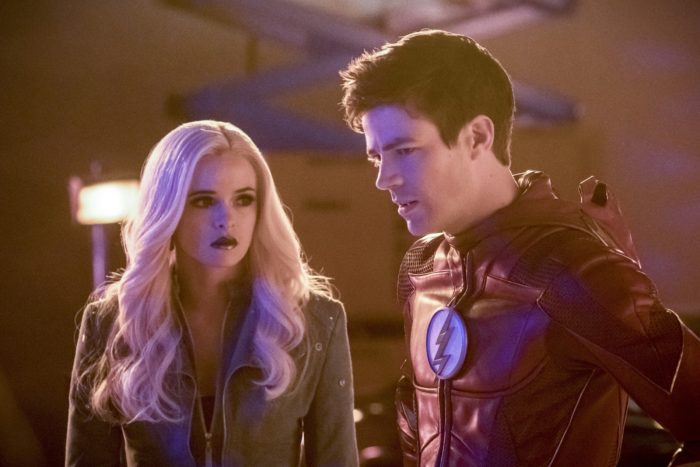 Flash unfreezes Frost (pun absolutely intended) and gives her the low down. She thinks the idea of her trying to cool down a nuclear reaction is hilarious, but, of course, they don’t have a lot of options, so she gives it a try. Unfortch, even our favorite ice queen doesn’t have what it takes, and her powers are rapidly depleted. Before Barry releases her from Flashtime, she asks that he not let Caitlin die. Aww. Frost’s concern for her alter-ego is almost heartwarming, but then, a nuclear reaction gone critical could warm the cockles of anyone’s heart. (BTW, the fuck is a “cockle”? Nevermind. I’ll google it later.)

It occurs to Jesse that they, three speedsters, might be able to generate enough power to neutralize the bomb themselves. They take a few laps and throw lightning bolts, but Jay is apparently feeling every one of his years tonight and can’t keep up. He falters and then has to leave Flashtime, too. I’m not mad at him. I figure if I make it to Jay’s age, I won’t be getting around so quickly anymore, either, but then, I’ve never hit Mach 8. 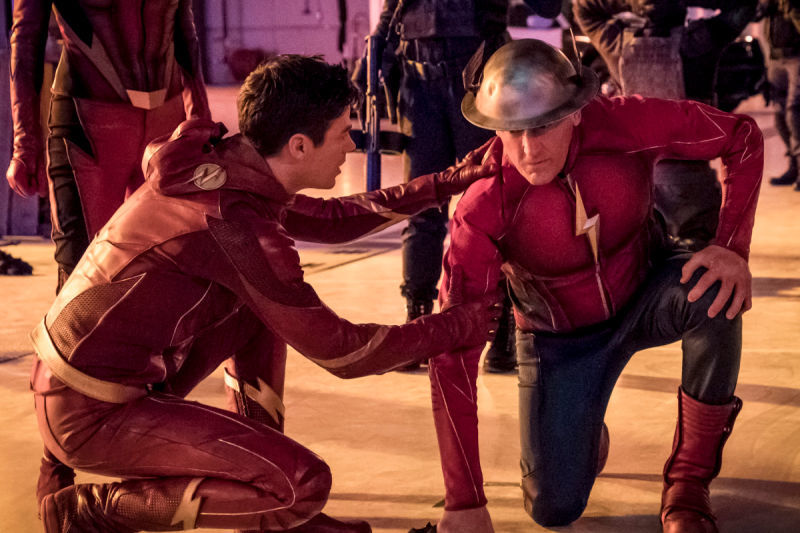 Jesse and Barry alone can’t create enough power, so Barry again suggests sending this thing into the Speed Force. Jesse pushes back–her dad didn’t say he knew it would be okay, he said he thought it would. And Harry never hedges–he doesn’t think; he knows things. Can they run back in time to keep the bomb from ever going off? In the meantime, the combustion is almost complete. Looks like time’s up for our hero and everyone he loves. They’ve been running for a long time, and it’s taking its toll on Jesse. Barry wisely tells her she can’t force her father to talk about her mother when he’s not ready to do so and then convinces her to return to Earth-Two, where she’ll be safe–and which is what Harry would have wanted.

First, though, Jesse runs to the lab and tries to unfreeze Harry to say goodbye, but can’t. She talks to him anyway, saying she understands how happy her mother made him and how sad he was to lose her. She even allows that maybe it’s fine if he can’t talk about it, but she just wants him to be happy. As Jesse leans against the table next to him, still catching her breath, lightning encircles him.

Cut to Barry at the whiteboard, trying to equation his way out of this, but he can’t, which leads us right back to where this episode started–him unfreezing Iris to say goodbye. This isn’t the quality time they had in mind, but it’s still a touching moment. But Iris has an idea–maybe he and the speedsters can’t generate enough lighting to neutralize the bomb’s detonation, but the Speed Force can. She remembers this from when they pulled Barry out of it. Roger that! The Flash starts running until he can make it into the Speed Force, then grabs a ball of energy in his hand like a kid making a snowball. Then he emerges back in the hanger, the Speed Force running off the side of a cruiser and pitches it hard at the bomb. Boy put some pepper on that curveball for real.

Suddenly everyone’s unfrozen–and not burned to a crisp. In the lab, Harry and Jesse embrace. In the hanger, Joe runs over to The Flash to see if he’s alright. “Are we dead?” Nope. You did good, track star.

Now, of course, what we don’t know yet is who the hell these folks were in the first place, rolling up on Central City and setting off nuclear ordinance. But I bet we’re about to find out.

Yep. Back at S.T.A.R. Labs, Team Flash is watching the worst music video ever: the leader of that crew of commandos is named Veronica Dale, and in her manifesto, she promises more nuclear blasts like the one The Flash just prevented. She’s an environmental activist gone radical with a group called Eden Corps. But who tipped her off to the arrival of that nuke in the first place? Still lots of questions to answer.

Jay is giving his farewells before heading back to Earth-Three, and he’s planning to retire. He’s going to train another speedster to take his place. 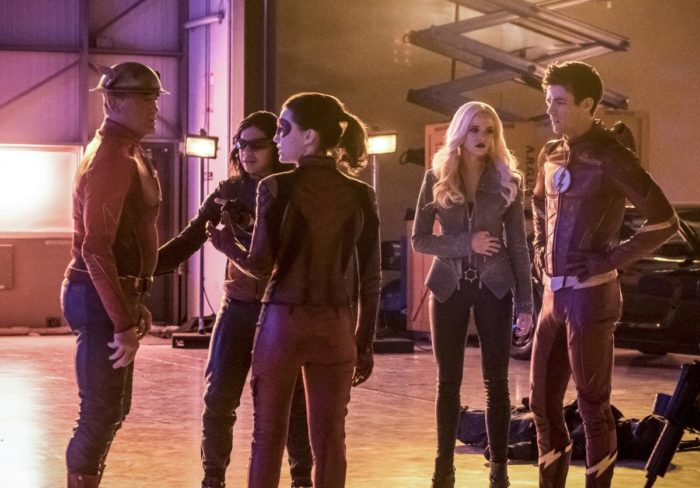 Barry and Iris have some down time now, while he recovers from spending so much time moving at a high rate of speed. He says he realized two things while in Flashtime. The first is that he’s definitely fast enough to catch DeVoe; they just have to better predict where he’s going to be. The second is that Iris was right about him needing to take a breather. This may not be the date night they had in mind, but at least they’re together.

Jesse is also saying goodbye. Harry finally starts to open up about her mother, but Jesse stops him–she heard Barry earlier. She knows she can’t make him confront things when he’s not ready, and she’s okay with that. However, he’s not ready for her to leave yet, either. He places the second, streamlined version of the Cerebral Inhibitor (now Mental Activity Dampener), now programmed to help the wearer read others’ thoughts instead of block them out–on her forehead. He puts on another and is able to transmit his memories of her mother to Jesse; she finally can see how much he loved her–and why.

Later, at CC Jitters, Harry and Caitlin grab coffee. Caitlin is still unnerved by the fact that she disappears when Killer Frost is in the driver’s seat. But this time she does remember that Frost was concerned about her and then–sploosh! It’s that cute girl wearing the Oregon Trail t-shirt from a couple episodes ago spilling her coffee all over our friends. She’s waiting for some people and is just! so! nervous! Hmm. Once Harry and Caitlin leave, she drops her Manic Pixie Girl facade; she’s definitely up to something, and it involves them. We knew she’d be back, but to what end?

Overall, I liked this episode–and the fact that it gave us a little breather from the DeVoe plotline. And next week’s episode looks like fire–Mrs. Allen as a speedster? I’m not mad at it all.