Fun Flash is back baby! We start off the 2nd episode of the season with Barry gettin his Risky Business swag on, singing Rock’n’Roll in his boxers (The Flash don’t fux wit briefs) while cooking breakfast for bae. Iris rises from her black girl magic slumber looking like utter perfection and digs in. Barry plops down on the couch to catch up on all the Golden Age TV he been missing out on… namely Jon Snow dying and (Spoiler alert) coming back to life. He watchin Game of Thrones and all these shows at 100x speed and IT WAS GLOOOORIOUUUSSSSS. What was less than glorious was Barry brushing over the fact he basically planned the entire wedding solo dolo. Read the room Barry, read the damn room!

Joe, Barry, and Cisco get called down to a crime scene where some uber rich dude who just casually copped a penthouse was mutilated by an elevator. Apparently Cisco now has CCPD credentials cuz he waltzes up in there like the Prince That Was Promised and starts breaking down the situation after hilariously proclaiming Sriracha will never be the same after seeing this strawberry jam massacre. Turns out the guy didn’t die because the elevator fell a hundred floors, dude was Shake Weight jerked, rattled and pummeled to death by a washed Jake the Snake lookin guy with purple haze eyes, who had a blast hacking the system.

S.T.A.R. Labs: Fun Flash elements resurface as Cisco highlights the new suit that Barry rolls his eyes about cuz he’s already worn it. But you don’t know about this tech comeup kid! Cisco hands him an instruction manual the size of a Encyclopedia Britannica… and the tech on tech on tech setup for this episode is complete.

After Barry cancels his evening training session without talking to Iris first, Caitlin tries to get Iris to go to therapy, but Cocoa Butter kisses is like, “Ummm I’ve known him all my life, I’m good.” Awkward convo avoided by an unauthorized breach in the lab alert! Cait and Iris get in position with the hammers drawn while Wally aka opossum mop speeds is ready for action. 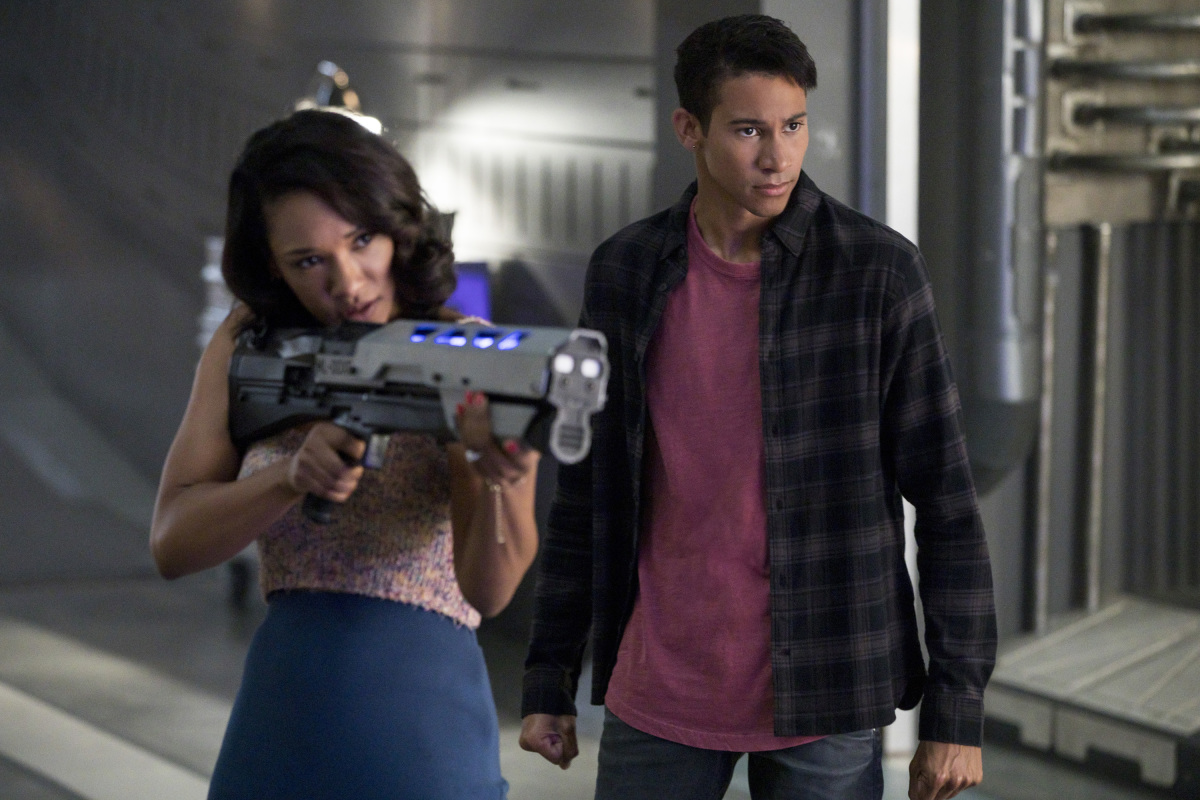 But it’s just Gypsy, here for a date with Cisco da Tech bae. Too bad he has to put her gorgeous radiance on hold because we got another (random?) guy in a nice car getting taken advantage of by the same KILG%OR hack as the elevator. Flash is on it, much to Wally’s helpless disappointment. Problem is, Barry is so hyped that he’s the Flash again, that he’s out here making dumb ass rookie moves. He can’t stop the hacked car and fails to listen to Iris’ directions, which puts the guy in more danger. Luckily Flash dismantles the car like Earnhardt’s pit crew with the help of some mechanic’s Snap On tools.

Sidebar: The writers are not playing this season. They gone get these jokes off every chance they get!

S.T.A.R. Labs: The meta of the week is not only hacking technology, but controlling it. They find a pic of the 2 guys who’ve been targeted. The 3rd member of the flick must be their hacker meta, Deacon. Barry knows he done fucked up out in them streets and apologizes for not listening. Iris tells Barry that Cailtin may have had a point with the couples therapy suggestion. He resists… then remembers he has the baddest young ting in the DC universe and relents. Aaaaand they have appt in 30 mins. As they sit down in he therapist’s office, Barry reads the newspaper headline that Mayor Oliver Queen is the Green Arrow. Easter Eggs and showrunners tryna pull fans back to Arrow… moving on.

The therapist immediately goes in. She takin all the notes on parental deaths, ex bae deaths and friend deaths. It’s so terrible. Eventually they get into some real shit and looks like therapy is paying off aaaand alert alert! Barry, sans suit runs down to the CCPD where Joe is questioning the rich guy, Tim Kwon, who almost caught the NASCAR fade. Biker Kevin Love with the Targaryen eyes isn’t going to let homie off the hook that easy. He’s controlling a Johnny 5 lookin bomb squad robot carrying a grenade to the interrogation room. Barry gets there milliseconds after the grenade goes off and plucks every shard of metal and piece of shrapnel out of the air before Joe and the billionaire get turned into explosion pin cushions. 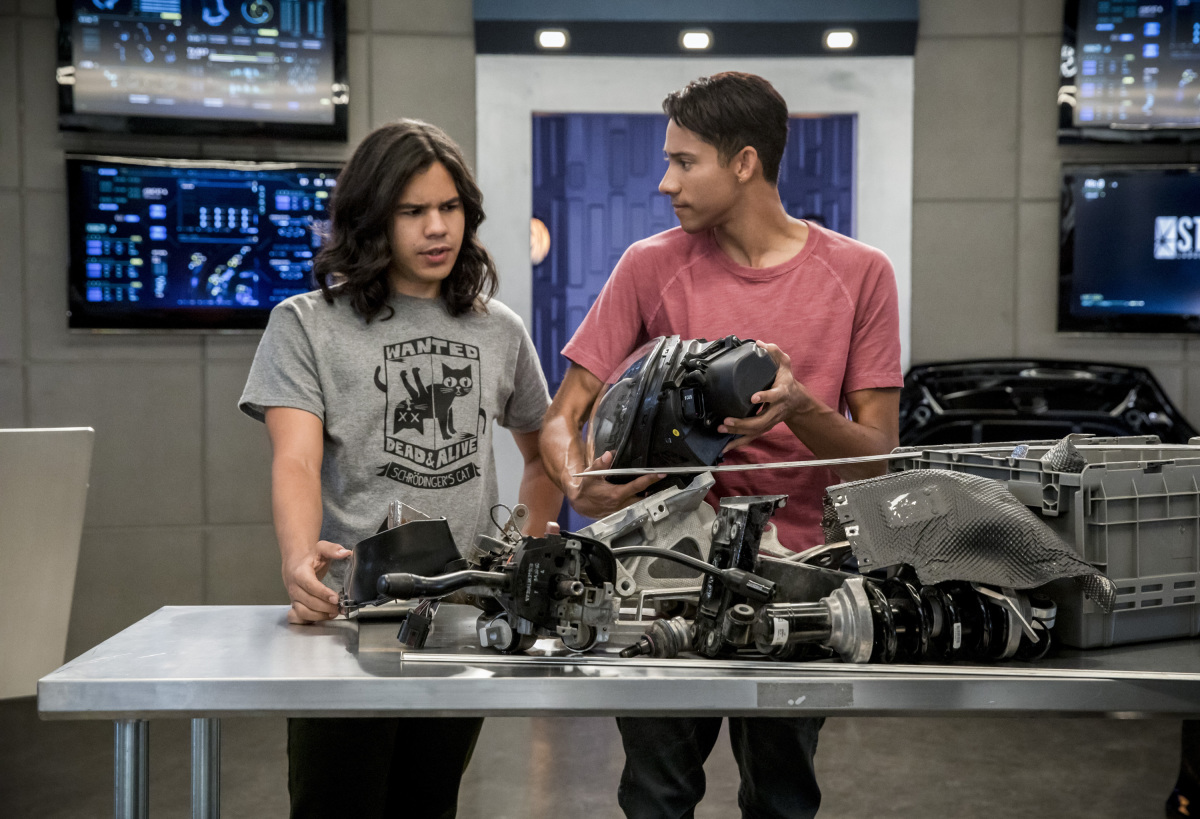 Cisco dives into the robot like a 3 year old in the McDonalds ball pit in 94. Turns out dude is like a living computer virus. Cisco proceeds to throw out various tech terms like the code keeps changing, biodigital, and most organic virus’ mutate… all to convince us he knows what he has to to defeat this guy. And he does… cuz Cisco is a fuckin beast, but Cisco is quite the opposite when it comes to love. He cancels his date with Gypsy, who is surprisingly cool with it and Caitlin is like, “You dumb SOB. She mad as hell.” I go on for days on this scene alone but I’m gonna leave it as is cuz it’s just too real.

Back to the therapist’s office and Shit. Gets. Real. Iris finally breaks her happy to have Barry home silence and calls him out for flat out leaving her without a shred of consideration for her feelings. He clams up like a herb, but the therapist ain’t wit the shits. She forces Barry to tell her how he felt when she said that. Can’t lie, for a CW show, this was an impressive scene, acting and writing wise. Glad to see the therapy reppin movement of 2016-17 continue.

Tim Kwon goes to his associate’s crib to talk about Deacon comin for them. Turns out he’s just another white collar thief. Angry hacker bum walks in and pumps the 4th diabetic member of this former team full of insulin cuz she’s a tech guru and has automated injection technology. Deacon kidnaps money bags and Dandelion Flash zips in there just in time to save the insulin comatose young lady. 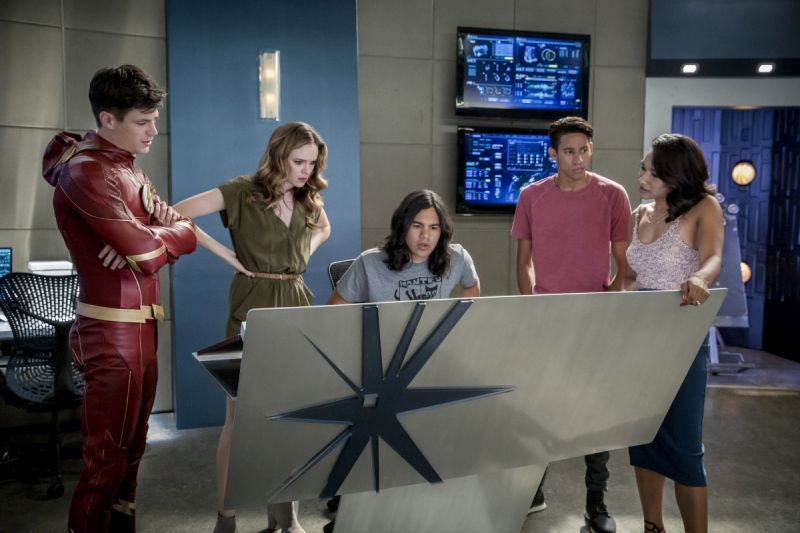 Sidebar: Yooo the new computer panels in S.T.A.R. Labs are flames! Iris redecorating while Barry was leveling up in the Speed Force?! Moving on…

S.T.A.R. Labs: WestAllen tries to make up when Kwon appears on TV to confess that the rich mufuckas that’ve been getting murked stole the Kilg%re idea from Deacon. Right on cue, Cisco reveals that the Team has created some code killing injection needle that will anti-SkyNet dingy Chief Hopper. But Killg%re, as he asks to be called has other plans. The Flash and Kid Flash fly down to the villainous warehouse hideout but it’s all for naught because Killg%re detects a whiff of technology in Barry’s new suit and takes control of the Flash. Son is literally helpless in his own super suit as Killg%re forces puppet Flash to blast DandelionFlash with a fucking Iron Man style rocket that comes firing out of his hand.

Back at S.T.A.R. Labs, Team Flash is likeeee, how much technology did you put in his new suit, Cisco? Mad tech. In that moment I stopped rolling my eyes (Deacon’s power wasn’t all that crazy) and thought about how much damage one could do with the Flash’s suit at his/her disposal. Cisco tells him to get away from Killg%re and hopefully his control weakens, before his evil ass cuts the cord on the comm to S.T.A.R. Labs. He abides and runs away so that my favorite part of this episode can go down. My mans and dem Barry da Speed Force Gawd picks up a pay phone and MAKES A COLLECT CALLLLLLLLL to S.T.A.R. Labs and I fuckin LOST IT!!!!

I’m over here im fuckin stiches while all these geniuses in one room are baffled at what to do next. Who steps up to hold it down for Team Flash? Who comes forth with the brazen confidence of a gladiator?! Like Hinata coming to rescue Naruto from Pain’s deadly clutches, Iris da Melanin Gawdess hops on the mic and drops those listen to bae barzzz! She tells him to throw a lighting bolt at himself to short circuit the suit. He said he doesn’t know if he can do it. He doesn’t know if the Flash can do it. Iris stops him dead in his tracks and let’s him know he aint doin shit cuz he aint the Flash, “We’re the Flash” then drops the line that only Iris can now drop. Run Barry, RUN! And boooiiiiii that man ran! He fires the bolt, runs to the hit point and gets wrecked. He wakes up, brushes a lil dirt off his shoulders and puts the beats on Kilg%ore before he can mobilize all the androids Google and Apple have stored in their basements.

They lock dude away in the metahuman wing of Iron Heights and the mysterious new Amanda Waller type character leaves us with a feeling of ill intentions.

Cisco focuses his attention on the lady he spent an entire season wooing and somehow put on the backburner on this special day. Earth-19 is crazy man. I dont know what the hell a 1-1-1 day is, but this Valentines type Day did sound like some adorable shit so Cisco breaks out the suavamente papi moves and sweeps Gypsy off her feet.

The thinker appears again and it’s looking like it’s about to be a takeover once he locates all 8 of his creations. 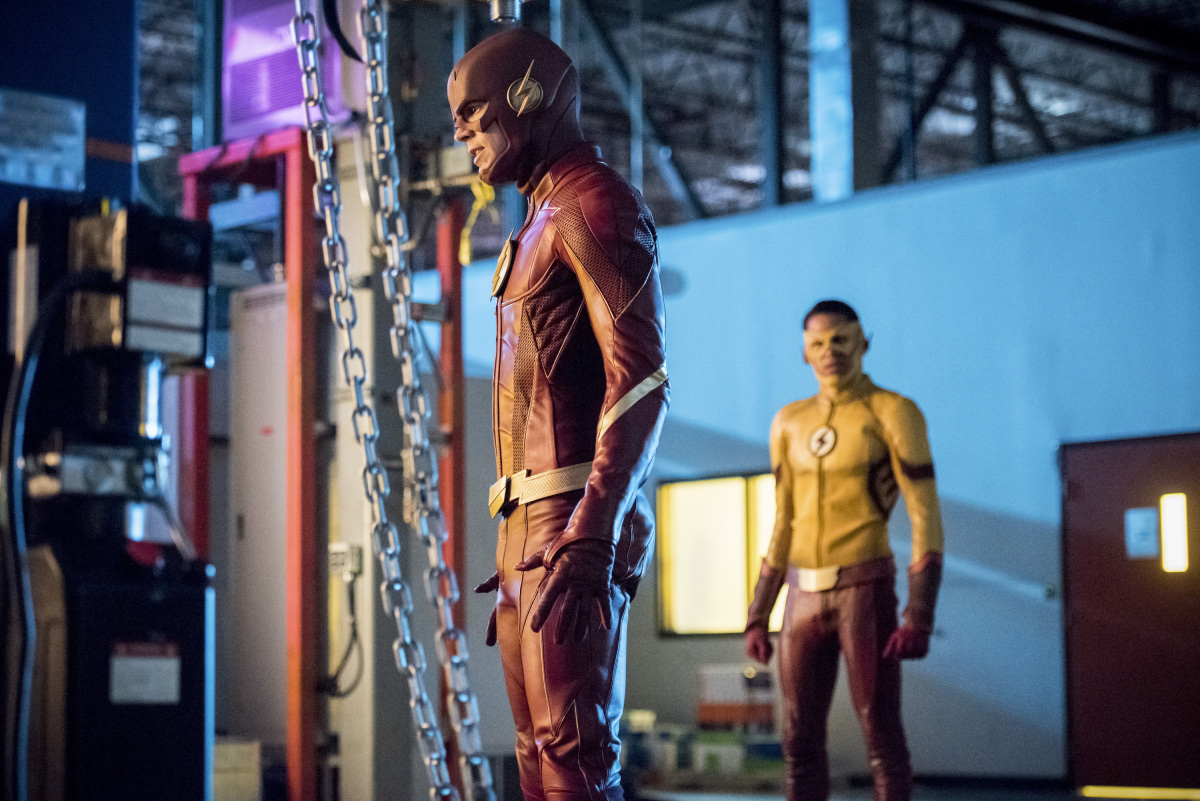