Aaaaaand you say Star City? HOLLL’ UP! The first thing Barry does when he realized he done fucked everything alllll the way up is to go and see Felicity?? Nah, fam. I don’t buy it. I mean she crazy smart and all that but come on Barry, the old flame!?! Anyway, Felicity does everything she can for the boy including consoling, coddling, and breaking down every dam aspect of this jacked up new-ish timeline. 1) Joe and Iris ain’t cool. They don’t talk after Iris discovering that Joe didn’t tell her that her mother, Francine was alive.
2) There’s a new guy at work, who is Barry’s new lab mate, named Julian Albert. He hates Barry because Barry likes the Harry Potter movies but hates the books.
3) Cisco’s brother is dead and he’s all grief stricken torn up inside about it. He reached out to Barry for supersonic speed help but Barry knows better than to mess with the timeline. *Rolls eyes*
4) Captain Singh is back. *Shrugs*
5) And of course, Barry’s beautiful & romantic kiss with Iris has been erased from history.

Bonus!! Barry can affect all lives across the network and discovered that Diggle now has a son, replacing the daughter Dig once had.

Remember the end of last week’s episode when this Alchemy cat was calling Edward Clarence from his slumber and urging him to scribble Alchemy on the mirror like an artist on bath salts? That guy shows up on the scene on some King Arthur shit and anoints Clarence with his alternate timeline Rival powers like a Speed Force Santa.

Back in Central and back at work doing the absolute most, Barry out here on his fuck boy shit wearing these over the top black on black James Dean sunglasses for no reason. Zero fucks I guess, right? Him, Joe and the new guy discuss the skin husk that has washed up on the shore. Barry tosses out some ideas and Julian shuts his ass down REAL QUICK! Barry and Joe try to get a sample to analyze back at the lab but Julian is a mega British sour puss and denies, but this the Flash we talkin bout!

S.T.A.R. Labs: The team is going over the sample when Cisco and Caitlin tell Barry how great of an investigator Julian Malfoy is. Barry tries to get info from them on why Cisco is so upset with him but no luck.. but we do find out it was a drunk driver who killed Dante. Then Barry decides to try and make something right so he runs back and forth playing family matchmaker setting up Team Flash dinner so Joe and Iris can make up. Everybody squads up at the West Household and it soon begins to crash and burn all up in Barry’s face.

The Flash finds Edward Clarence, the man he left in another time. Rival is back and is in our world ready to become the one and only speedster around. The boys are off to a good ol’ fashioned footrace! Until Flash shows this Rival burger why he runs this hero game in Central City. LeBron shoulder charge for dat ass! After doing away with that nuisance, Barry heads back to S.T.A.R. Labs to regroup. After being mysteriously and 100% correct about the identity of the human husk, and trying to patch things up all over his life, Iris pulls Barry to the side and tells him to keep it a buck with her. “Da fuq is really good wit chu?” He says that there is only one thing he can do now, and runs thru the Speed Force until he gets yolked up out the Force by Jay Garrick from Earth 3. They have lunch at a diner in 1998, with Dawson’s Creek playing on the ancient looking TV. Jay let’s him know that he’s been keeping an eye on Barry and drops some realness on him, the only way a fellow Flash could.

“We’re not gods, we’re men. What kind of hero are you gonna be?”

S.T.A.R. Labs: Barry finally reveals the truth to the team and tells them he went back to save his moms from getting murdered. He goes all Harrison Wells on’em and grabs the window board and white marker then explains what Flashpoint is. He tells em that Rival is from that timeline, which is why he’s here and that things are different from the original timeline he came from. Cisco comes firing out the gates with venomous hate once he finds out that Barry went back to save one of his family members but not Cisco’s. Sad Cisco runs off and Barry tracks him down to apologize and hint at the fact that Cisco is working on a Vibe suit?! Oooouuuu.

CCPD: Barry asks Julian to read his report on the husk from earlier that belonged to Edward Clariss. Eventually he lets Barry read it and they determine that the body likely floated down from the old Prescott Sawmill. His Flash spidey sense goes off, and he runs over there to find the Sawmill speedster himself. Too bad Rival ain’t alone! Alchemy hits Flash with a hadouken from the side and is outnumbered.

Prescott Sawmill: Rival and Alchemy use him to mop up the floor when Team Flash realizes our boy’s in trouble after their heart to heart discussion about Barry’s selfishness. Iris had a pretty beautiful Michelle Obama type ‘We are a family’ speech though..

Rival is ready to end Flash’s life and the team is lookin’ mad shook out here in these streets as Barry’s vitals are going off blood red. Dope little battle ensues when Cisco arrives last minute to save Barry and take the tag team championship belts back! The Flash and Vibe do what would be the comic book equivalent of a Dudley 3D Bomb when they pingpong with this dude mid air and hit him with that Mortal Kombat vs DC Fatality!!

S.T.A.R. Labs: The team finds no record or traces of Alchemy but Cisco finally begins to get a little bit of himself back when he names our latest puppet master villain, Dr. Alchemy. Our amazing supporting cast decides they don’t want to know what their Flashpoint counterparts were like. The West’s go out for dinner so Cisco and Barry bond over a little potential tag team action in the future.

Julian officially has it out for our boy Barry. He’s too good of an investigator and gives me a creeped out slithering vibe.

Iris and Barry get their kiss back, directly in front of the tree and street light it happened at before.

Edward Clariss is attacked or kidnapped (I’m guessing murdered) by some gigantic metallic machine inside his super secretive-looking cell, that clearly wasn’t shit to break into.

Barry mentioning everyone who had powers in Flashpoint getting them on OG Earth?? Wally you’re up! 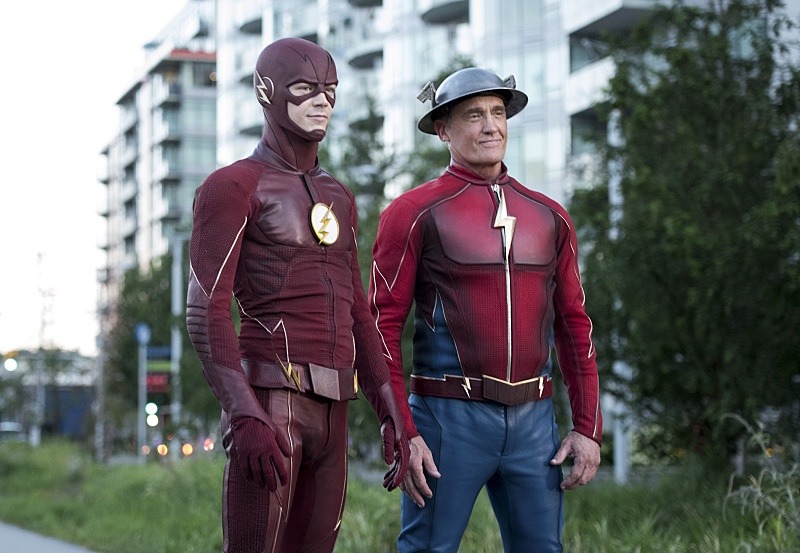