So it’s been a while since we done recapped Barry da God Body Allen, A.K.A. The Flash, and it’s been a minute since we done seen the meta-humans and bad guys give our hero a run for his money. Well, let me begin by saying… the Flash got his ass whooped this episode! But it was all in an effort to understand and stop the disturbed villainous she-speedster, Trajectory. At the same time, Barry goes through a lot in this episode when you think about the big picture. More on that later…

So we pick up the pieces following the closing of the breaches, the gargantuan sized shark terrorizing the city, and that big end of the episode reveal that Zoom is actually Jay Garrick (or something like that), by everyone going out to get “turnt!” Dammit Cisco, even when you’re being a lamo we still love you.

The whole squad out here turnin’ up. Barry, Iris, Cisco, Wally, Caitlin, and they even convinced Harry ‘Heart of Ice’ Wells to let his under-21 daughter go.

Team Flash and company are getting their groove on when out of nowhere, someone comes speeding by. The bolts of lightning pickpockets everyone at the party and makes off with hella cash. The Flash does what he does best — run faster than everyone in the world — the only problem is, well, the she-demon blows his speed out the water!

Barry is left in the dust to contemplate life, cry a little, whip out his emergency baby blanket for comfort… oh, and figure out the steps he’s gonna need to take to bring down the city’s new threat.

Cisco’s Meta-Human Activity App goes off and the speedster is spotted in dem streetz destroying cars, ruining the nights of innocent citizens, and being an all around dick. Everyone thinks it’s the Flash because of the yellow lightning streaks that were seen popping up throughout the night, and Barry rushes down to clear things up! Ain’t no wannabe-speedster gonna be running around sullying his good name in this city! He gets down there to stop this dude from reeking havoc aaaand Barry gets dat ass beat and finds out that this isn’t a man, this is all being perpetrated by a woman!

The team is worried. Who could this new speedster be? How is she faster than Barry? Why didn’t Barry get her number? OK that last one was just another classic example of Cisco being the much appreciated comedic relief amidst all the chaos that goes on in and around S.T.A.R. Labs and Central City.

They suspect this isn’t a meta who gained her powers from the Particle Accelerator because they would’ve probably heard something about her in the last year. That gets Caitlin “I’ve Had a Really Shitty Year” Snow thinking about that time she was doing everything she could to save her boo thang Jay Garrick. Caitlin recalls having a fellow geek squad member assist her when she was stuck in a rut and couldn’t figure how to perfect Velocity 9. The team was on Earth-2 and Caitlin had to whip up the drug, buuuut she just so happened to withhold that information from the key members of the squad.

Team Flash: HOLLLLLL UP! Some random ass woman is running around the city with the formula to create the most potent form of hybrid Speed x Cocaine on the planet?!
Caitlin: Take a chill pill, homies. I only coughed up 3 of the 8 components to create V9.
Harry: Unless she can reverse engineer that shit like a boss… an evil boss. I would know.

Iris is working at Central City Picture News and her new, surprisingly chocolate boss is all up on this story. He tells Iris and his entire team that they need to dig deeper into this Flash-Gone-Bad story, and Ms. West gets the main article duties. He sets the deadline for tomorrow morning. Iris pushes back… ya know… ‘cuz she knows that the Flash is not the one committing these crimes, but she can’t back up her argument with any sources, so she gets professionally bodied into writing the story.

The negative side of introducing a new black character

Things get romantic damn near immediately between these two, as Iris makes a last minute effort to convince the new Editor-In-Chief that the Flash is still the hero the city needs and deserves. They go get coffee, and in the back of his mind homie is thinking he ’bout to get some incredible Iris lovin’! But she’s all business and as soon as he realizes this, he hits the eject button… but I’m not at all convinced this is the end of their flirty future.

Meanwhile, Poppa Joe West and Caitlin make their way over to Mercury Labs to check on Ms. Snow’s old colleague. Homegirl’s alibi is rock solid. Seems like she don’t know a damn thing about this new speedster tearing up dem streetz. In other words, it’s absurdly clear that this chick is definitely the villain of the week.

Next time we see the super suspect schizophrenic speed sorceress is when she somehow manages to infiltrate S.T.A.R. Labs and locks Barry up in his own Meta holding cell. Look at Barry out here looking like a lost puppy.

She threatens the team’s lives with guns to the face if they don’t whip up some more Velocity 9 for her. They warn her that’s not a good move, but she’s addicted like a dope fiend and threatens Jesse’s existence one more time before Harry and Caitlin get to work on crafting a new batch of Speed Juice. Oh, and let’s not forget that she got exactly what she wanted, was dumb skeptical that they created actual V9, and injected an innocent bystander with the deadly drug before speeding out of the building.

That innocent bystander just happened to be Jesse Wells, who immediately goes into shock as the drug courses through her system and she starts foaming at the mouth. Blood transfusion needs to go down ASAP. Harry is the only one with the right Earth-2 blood type to save her so he jumps all over his daughter’s rescue mission as Barry races after Trajectory, using the tracking device Caitlin stealthily placed in the V9 vile.

Trajectory, as she calls herself (and Cisco hilariously points out, it’s always the crazy ones that name themselves) is spotted tearing up the structure of a bridge as hundreds of people remain terrified for their lives as the bridge crumbles beneath their feet. The Flash zips on down there to stop her. The science squad tells him that he needs to worry about beating her down second and focus on rescuing lives first. Flash zaps everyone off the bridge before it collapses and has to conquer his earlier episode failures and make the speed jump over this collapsed bridge so he can duke it out with that loopy lady Trajectory. The homie sticks the landing! Went Mach-3 for a split second, too!

Sidebar: Did you see that scene after Joe and Cailtin left Mercury Labs where Dr. Eliza Harmon gets all Me, Myself & Irene mixed with a little Fight Club Tyler Durden?

Shorty was straight up tweaking off that V9 cellular degeneration, which I’m guessing starts degenerating the brains cells then works its way to the rest of the body. But yeah, long story short, she cray cray.

So our boy Barry makes the jump and shoulder-charges Trajectory into a suspiciously awaiting crushable object. Barry tells her it’s over and to give up, but she’s a bit chemically off balance and decides to inject herself with another dose of the drug to put herself levels above Barry’s speed. Barry is feeling like he ain’t shit. Barry feeling like he might need to resort to new lows in order to stop her. Barry feeling like, “WHOOOA! Did she just disintegrate before my eyes?! Guess that cellular degeneration really does begin with the brain and eventually works its magic on the body, until POOF.”

S.T.A.R. Labs: Back at home base, Barry explains to the team what happened. He tells the team that she left ya boy in the dust once again, and as she fades into the distance Barry notices her lightning turning blue, like Zoom’s. She runs herself out of existence, leaving only her suit behind. Cellular degeneration is a motha! The team starts to debate what this lighting-turning-blue business might be about and figure out that Zoom must be dying and needs Barry’s speed in order to stay live… just like Jay! Caitlin doesn’t want to believe it. Luckily, Cisco uses this moment to admit to everyone that he’s been vibing Zoom. He tells them that every time he vibes something about Zoom that it’s been near the OG Flash hat encasement. Barry immediately runs up on that ish.

Cisco goes into full vibe mode and sees Zoom take off his mask, revealing Jay to be the ultimate evil. Barry and the team are devastated.

The Harry Wells and Jesse dynamic actually turned into something in this episode. Seems like we might actually, somehow get Jesse Quick on The Flash this or next season.

Velocity 9 logistics as a whole are all jacked up. Was there V-9 on Earth-2? Is V-9 what turned Jay into Zoom? Is Jay actually Zoom?

Iris gets to throw some shade at her new boss when she drops her new article on his desk at the end of the episode. And then they psuedo-flirt. We’re all so surprised.

S.T.A.R. Labs continues to be the easiest superhero hideout to break into, of all time. 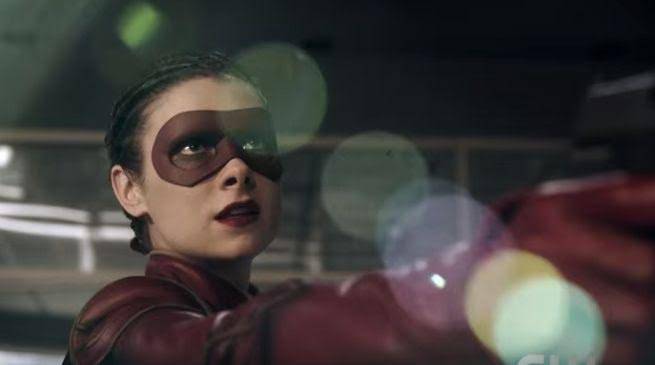 Remember when I said that this was a big episode for Barry? Take a look at these things: He couldn’t make the jump over the canyon at the beginning of the episode – very defeating. It helped motivate himself to hit mach 3 and make that last jump.

Barry was left in the dark regarding Velocity 9 and had a really big internal battle contemplating the decision to use the drug to boost his speed, so he can become fast enough to battle Trajectory. Obviously Barry is being heavily influenced by the looming encounter with Zoom. Is V9 the only way to stop him? We know Flash will learn a lot on his visit to National city, when he pops up on Supergirl… and our hero is hitting his stride when it matters most going into the tail end of season 2. These are all huge components to the larger plan of defeating Zoom? Jay? and whoever else is thrown at him.

Watching The Flash? Catch up on our previous recaps here!