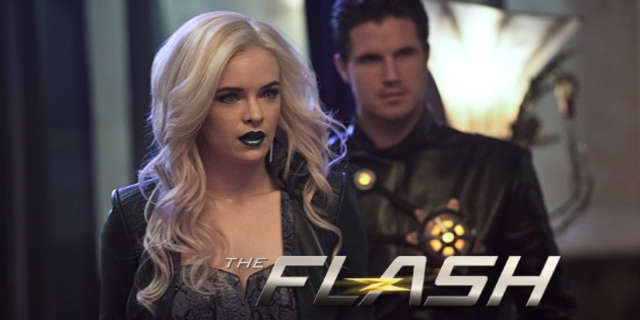 Team Flash is ready to head to Earth-2 in this stellar episode, folks. Time to get paranormal!
Barry out here on his Jesse Owens unibomber game speeding through dem streets, closing the breaches at will.

Meanwhile, Earth-2 Wells talking all dark and ominously on his watch recorder. He repeats something he once said before, but things are different this time around. Now, he’s not coming for his daughter alone.

S.T.A.R. Labs: Hero-closing-50-breaches post-debrief goes down and Team Flash begins to suit up to travel through the last breach and pull up on Earth-2 buttt not before Barry does one last thing.

West Household: That’s right! Barry needed to have that sit down dinner with Joe n Iris. Barry reassures Iris that he aint about that abandonment life, and promises to return.

S.T.A.R. Labs: Jay Garrick prepares Cisco, Harry and Barry for the run through the breach. That’s the team we get. Accept it. You loyal. While traveling to Earth-2, they’re going to get hit with sensory overload and see everything, as Jay puts it.

Following their recent confirmation of a crossover episode between these two, this was a pretty great little inclusion of a Supergirl sighting in the images flashing by. Slid that in there like tax-breaks for the 1%.

But back to the reason we all tuned in for this week of The Flash. Earth-2! Where Zoom will murk you! Barry and Cisco slither on out of the breach and begin running amuck through the throwback streets of Earth-2 and halls of S.T.A.R. Labs. They stop right in their tracks when they run into  Dr. Henry Hewitt, the ol brother who couldn’t fuse with Stein to become Firestorm and turned evil. Safe to say these two change their giddy tune real quick.

Barry sees himself breaking down a murder on TV and gets an idea. He flashes his E-2 self over and this geek immediately gushes over the sight of Wells. OG Barry knocks him out and assumes lame Barry’s identity.

Barry shows up at the CCPD expecting Joe to be running the show, when in fact, Iris is the detective in charge. Her partner is anti-Deadshot Floyd Lawton looking like a Fall Out Boy reject. Iris grabs OG Barry to the side and slides her tongue down his throat.

Barry damn sure wasn’t expecting that and was like, “Whoaa momma, didn’t know it was my birthday.” Iris like, “A wife got to get hers. At work, home, WHEREVER I can get my sugga.” Her MetaHuman life alert goes off and she dismisses it, then takes Barry home. A home he is not even close to ready to handle.

Before we can get to this impostor Barry and Iris intimacy, we hop over to a warehouse that is just as ridiculous as E-1 villainous regions. In this outrageous looking place we get our very first, quite impressive shot of Earth-2 Caitlin Snow as Killer Frost. Her and Ronnie aka Deathstorm, are just busy committing mildly vicious acts of murder, nbd.

YOOOOOOOOOOOOOOLLLLOOOOOOOO did she just Sub-Zero kiss of death that dude in the shadyville warehouse?!?!?!?? Then she hit him with the snobby white girl DAB!? It’s a wrap. This episode is too official, ALREADY!!

Sidebar: I have to interject and finally applaud the writers of this show for this Earth-2 storyline. I figured they couldn’t just keep dropping heroes and villains on us, especially the alter egos our main characters assumed in the comics. So seeing them brought to life on Earth-2, knowing they’re likely temporary, is a nice touch and explanation for seeing all the good and bad guys we have been waiting for.

Back to the action

Barry out here mesmerized at the fact that his other self has such a beautiful life with Iris and..WHATS THAT?! Apparently..a relationship with his mother?? Cue the violins. We’re gonna need 8 boxes of Kleenex and 3 pints of ice cream because The CW is out here tuggiiinnnnn on them heart strings something mean! Barry on the phone with the moms he never got the chance to have. STOP. I cant even get into this scene without getting choked up on some South Bronx, dead serious, from the heart, gangsta shit. This was a beautiful scene yo. Grade A stuff.

Cisco and Harry out here being useless, trying to find Zoom. Well, Wells is. Cisco just fantasizing what his E-2 self could be doing. Barry and Iris roll out to Jitterbugs, the Jazz Club and we all get to bear witness to Joe West showing he still go the pipes! I swear yo, every dam character on this show got the vocals skills. Barry. Cisco. Joe. Who’s the next Flash Idol? Apparently Joseph has a bone to pick with Bartholomew and blames him for Iris becoming a detective, subsequently putting her life on the line every day. It’s actually pretty hilarious to see Joe being an asshole for once.

Back on Earth-1, some dude name Geodude or something (Imma call him Geodude, b/c that little Pokemon was cooler than this weak ass villain of the week) is tearing up the streets calling out The Flash. Joe wants Jay to rep for the three letter name gang and take Geodude out.
Jay dont wanna inject himself with V-6 to fight him so he reveals that he used to be obsessed with getting faster. He worked on a formula to increase his speed and took V-6 to do it, now that’s exactly what’s killing him. Oh the irony. Caitlin vows to figure out the velocity formula so we can have the Triple OG Flash finally looking like the hero he deserves to be seen as and not this baked potato. Barry and Iris chillin’ on some 1920s Harlem meets 1940s Nawleans meets 2010s Hipster movement, when Killer Frost and Deathstorm blast through the doors and start sniffing out their Earth-2 visitor. Nobody fesses up and Iris pulls the heater out JUST LIKE JOE WEST WOULD! Barry tries to talk Cailtin off the ledge, but Barry forgets that so many things are possible messing around in this new world. Turns out Killer Frost hates the name Caitlin and sends some giant ice daggers his way. Battle pops off and Joe gets hit with a death ball so Barry finally decides to use his power and flashes Frost and Deathstorm out and they go toe to toe. Our boy Barry holds his own against these two and they scram.

Yeaaaahhhhhhhh, that last line was the worst one of the whole episode. We’re just gonna act like that never happened.

S.T.A.R. Labs: Harry and Cisco are trying to convince Barry that they need to start working on a way to find Zoom and stop his reverse Jon Snow and Daenerys Targaryen minions. We all know Barry a sucker for Iris and Joe so he ain’t doing nothing until he ensures his “family”..yes even on another Earth-2, is good. He speeds over to the hospital, only to have CW sneak yet ANOTHER death on us!! They give us Nora Allen and take away Joe West. These morbid mothalovin monsters love doing 1998 physical fitness test pull ups on the heartstrings!! And even though we only knew him for like 23 mins, watching angry, crooning Joe West go down was tough.

Harsco went straight to work and have created something that they believe should neutralize KIller Frost’s powers. I don’t know why they fail to even address Deathstorm’s powers like he chopped liver, but I digress. Impostor Barry brings in Cisco to help Iris take out Killer Frost and Deathstorm. He’s packing heat.

Earth-1: CCPD Take on Geodude. Joe pulls up and gets the hammer ready to fly. Geodude talking mad smack about The Flash being gone when suddenly, Jay Flashes in hopped up on some V-7 and drops Geodude. He’s doing work on the landscaping lunatic, showing off mad moves we’ve never seen him do.. until the V-7 wears off, he trips and Jay’s head gets put in The Viper vs The Mountain grape crushing position. Riiiiiigggght before Jay says his final farewell, Joe West comes through in the clutch and does what he does best. Shots, shots, shots, shots, shots, shots!

Earth-2: Cisco, Lawton and Iris run up in the alleged hideout. Lawton acts like such a baby bird. Iris rolls up like a straight boss. We all know Lawton will be of zero help so that leaves Iris and Cisco to take on Killer Frost and Deathstorm. Cisco is disappointed with his Earth-1 partner’s decisions to work for Zoom in this universe. Then out of the corner of the shadows of this absurd bad guys lair of a warehouse comes Earth-2 Cisco, who Ronnie and Caitlin work for. E-2 Cisco the brains of the operation? E-1 Cisco. Literally. Stupified.

Feeling the glory of Vibe worshiping his every move, Reverb as we find out he is called, gets a little full of himself. He’s asking Killer Frost, Deathstorm and Vibe if they want to run Central City. Cisco considers it for a split second then calls Flash for backup to even the level the playing field. Despite the mortal combat occurring around him, Vibe is STILL utterly amazed at the potential powers he has yet to unlock.

Dumbfounded is he, when he sees Reverb use his powers to blast Lawton’s horrible shooting ass away, and asks if he can do that. It’s pretty great, besides the fact that our Earth-1 homies are getting the BEATS put on them.

Deathstorm and Reverb are sending shot after shot of death balls and wave blasts at Flash’s livelihood. Killer Frost warns them that Zoom wants The Scarlet Speedster to remain unharmed if he’s found, but Deathstorm is acting like a meat head and Reverb straight gassed up as a Hummer. They sending them shots at Barry like a pissed off Piccolo trying to destroy Freiza’s Final form. Then BOOM.

Zoom is there in an instant with his deli meat slicer hand in Deathstorm’s spine. He turns his attention to Reverb and asks him if The Flash seems unharmed, like he requested. AND THEN A HAND SCYTHE GETS DRIVEN THRU HIS ABDOMEN. Zoom disposes of them swiftly, then zaps Barry to his prisoner holding cells.

Jay is a dirty liar. He said that Zoom stole his speed, but it was his addiction to getting faster and taking V-6. Here is your recap of all the Earth-2 counterparts:

Pretty amazing episode right here, if you ask me! Missed an episode? Catch up on our previous Flash recaps here!