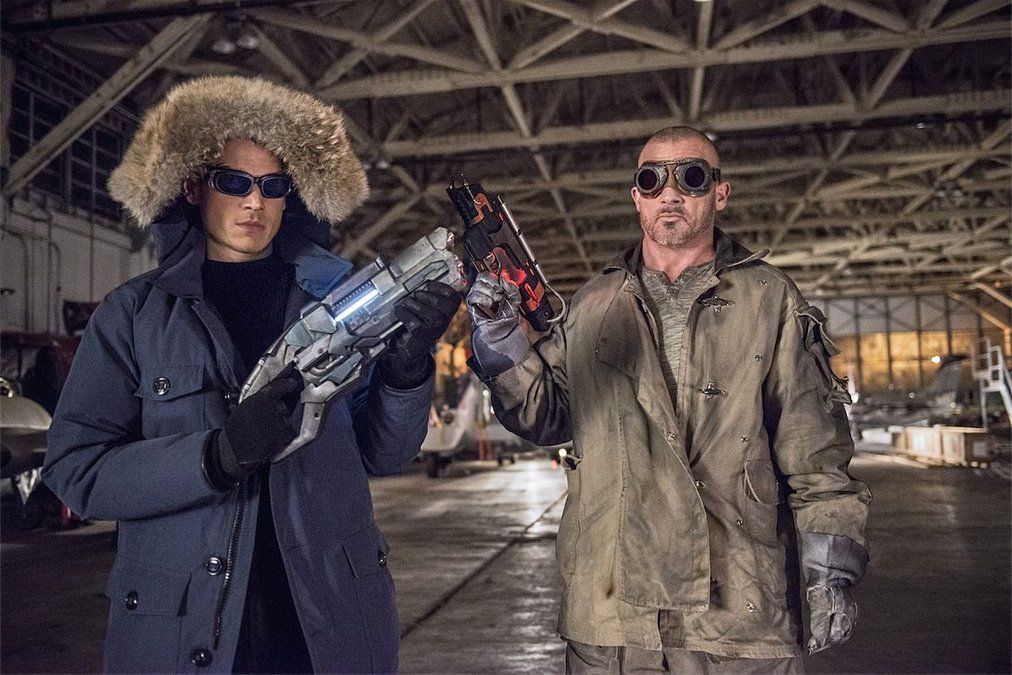 Barry Allen is back and running on the west side highway in Central City but it is not all good from where we left off a a month ago. Barry got his ass MOLLY WHOPPED by the honey mustard flash (I’m not going to stop calling him that). Barry ain’t the fastest in the game no more. So what he do? He breaks out the Nintendo track and field pad to get them experience points up. He pushing himself against Cisco’s drone (non government issue) in order to get his speed up. Barry got the Need For Speed : Hot Pursuit on his mind as the drone is set to God Mode difficulty. It ain’t a blue shell tho soo.

Numbers on the board!!! Barry ain’t satisfied with that. The Honey Mustard Flash still got him shook down to his Heinz 57 (blood). Dr. Wells is telling him he’ll be ready and Cisco who apparently doesn’t like the nickname I gave the man in the yellow suit dubs him “The Reverse Flash”. I like HM Flash better but whatevers.

Meanwhile, we see the garage door of a wall freezing and what appears to be either Superfly’s or Dollemite’s Cadillac crash through it. Leonard Snart (Captain Cold) hops out the whip fresh as fuck and this time he’s joined by his boy Mick Rory.

They’ve broken into a customs warehouse filled with more imported cars than your favorite The Fast and The Furious film. Snart ain’t here to move these whips though. He’s waiting on the police to arrive. Mick pulls out a case with which I assume contains his burner but Snart tells him Snart telling him to hold that noise down cause they waiting on The Flash to arrive… aaaaaaaand a good minute later he doesn’t. Snart got the confused screw face on thinking “WTF?” He tells Mick they bouncing and Mick looking at these whips thinking “We really not about to steal none of these million dollars cars?”.

Barry peeps the crime scene and knows (I assume by all the icicles left around) that this is Snart’s work. Back at their hide out Mick is fed uuuuuuuuuup. He telling Snart, “So this is what we do now? Break into places and not take shit? I dunno anybody that ever got guap of that but what do I know right? Fuck me right?. Snart then lays out the plan to steal a painting called “Fire and Ice” which is worth 25 million. Pause. Who the fuck decided to go so hard in the not so subtle to give the painting that name? For real this is the equivalent to when Edward Nigma was on Gotham holding a cup with a question mark. You’re better than that guys… come on.

Barry is ready to square up against Snart since he feeling fucking froggy and trying to leap all up in Central City. Wells tells Barry to calm that down. That if he keeps focusing on his training instead Snart will get bored and leave…Barry tries to it Joe with that I’ma let that shit breathe logic and gets the “the fuck is this” retort face.

At the West house we see its move in day as Iris is clearing her stuff out to live with Eddie. Joe West finds an old stuffed turtle of Iris’ that he hide cause she broke his Duke Ellington record when she was younger… Iris, you broke bruh’s record tho? My dad wouldn’t have taken my shit away, he’d have repoed my life. You got off easy. Barry stops by and the awkward is so thick in the air as Iris bounces. Barry tells Joe he let Iris know how he feels. Joe said, “You did what now? Loooooooooooooooooooooooooooooooort…. I’ma let you finish but you know Iris ain’t coming back to clean up this mess soooo…if you could just”

The police get some thermal shields to help out against Snart’s shield. Cisco gives them the demonstration like its a science fair project but the captain ain’t impressed till he sees that shit in the field. Speaking of which Snart and Mick arrive on the scene ready to steal the painting. YO, the arrived on the scene with guns looking like modified super soakers but they were letting them thangs rang the fuck out. Cold’s gun was neutralized but Mick came out with the fuckin burner ready to fuck shit up. My man was so into it he making sound effects with his gun (you know he was).Central City going need to get their super guns control laws in order cause this shit fuckin crazy.

At their hideout Snart ready to blast on Mick for damn near getting himself off while holding the burner. Mick is like, “you been known about my…condition.”. Snart tells him he can take the painting and be rich for that 25 mill or he can help him take Central City from The Flash as their own playground. Mick burns the painting showing he’s with Snart. I woulda been like, “Dude, you coulda just said yes I was still going cash in on that painting man”.

Meanwhile Caitlin is out following up on some research on Firestorm (an acronym for a project dealing with transmutation) which leads her to talking to Jason Rusch (Yaaaaaaaaaaaaaas Jason cameo Yaaaaaaaaaaaaaasssss) who tells her shit is crazy right now. The government ran their shit and the dude behind the plans was Professor Stein. Back at STAR Labs Cisco came up with a way to take out Captain Cold and Mick whom he calls…

Since Cold’s gun reaches absolute zero and Heatwave’s reaching the critical boiling point they can cancel on another out if they cross streams… Yes and I know what movie you’re going to say and it’s covered.

It’s good that they came up with a plan cause Barry gets a call from Joe West that the Icyhot Boyz kidnapped Caitlin and are on TV WYLIIIN OUT!

YOOOO SNART ALL UP IN THE CAMERA LIKE A HYPE WILLIAMS VIDEO THO!! HE CALLING FLASH OUT HIS NAME AND ALL THAT SHIT LIKE CENTRAL CITY BRINGING BACK THE SOURCE AWARDS. He told Flash where to meet them to get stomped out or Caitlin doesn’t make it to season 2. This would have only been better if Snart had the Funk Flex bomb sound effect dropping after each bar he said.

“Yo Flash. Ya website is trash *bomb sfx* That blog Iris made for you is trash! It does no numbers *bomb sfx*”-Captain Cold

Flash showed up on the scene but couldn’t do much but out run Cold and Heatwave’s advanced super soakers. It got to a point Flash was catching them beams nasty. My man was running up buildings trying to get his plan to work to no avail. At one point Eddie had to grab a shield and step in to prevent flash from catching the fade. Barry got Eddie’s ass out then realized the best way to beat them was slowing down…and apparently getting hit so they would cross streams.

Personally? You wouldn’t catch the kid doing that shit. Nope. It works out for Barry though as Heatwave and Cold get knocked out of commission then taken into custody. Their guns are confiscated by Cisco instead of destroyed cause we need material for season 2. Back at the west house Barry is helping Iris and Eddie with the last of of her stuff. Again, if it was the kid? NOOOOOOOOOOOOOPE. Barry lets that Drake knock as he tells Iris that he predicts the best for her and things going back to normal for them eventually.

Barry decides to move back in with Joe which helps him when he needs to duck out. Barry moving back in was the most heart warming scene in the episode. Woulda only been better if Joe told Barry his ass would be paying rent.

The Icyhot Boyz are being transported to prison till we see that Snart even had a plan for this shit. The transport comes to a halt and we see that Snart’s plan has only just begun to take place as his sister comes and bails them out. Female villain tiiiiiiiiime!