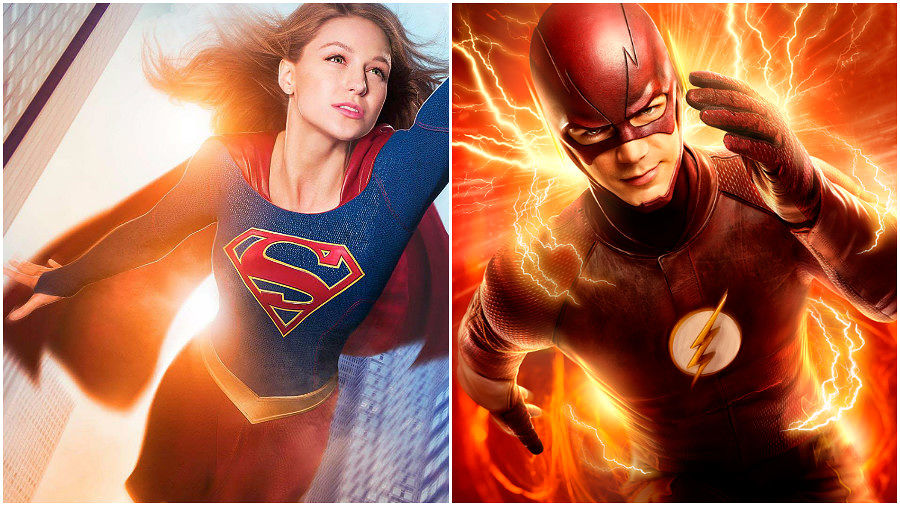 The Golden Age of television. The height of Comic Book adaptations. The peak of Superhero TV programming. There is no more denying it. We are literally smack dab (kinda like Cam’s Super Bowl performance) in the middle of a glorious run by countless superb TV shows, and things are going so well that something unheard of and monumental is now happening. The CW and CBS, two completely different networks with completely different fan bases, although ultimately the same company AKA all $$ proceeds will go to the same place (but we’re going to ignore that for now), have decided to team up and bring the good people of Central and National City a crossover episode that’ll have fan boys and girls salivating for more.

This photo was back when they were just clowning around/teasing the idea/trolling us all.

Did that honestly just register with you ninjas?! CBS: The land of nerdy hits like Big Bang, family dramas and reality shows like NCIS, The Good Wife, Survivor and Big Brother is partnering with The CW and their teenage spirit focused programming like Vampire Diaries and Supernatural to bring us the Scarlet Speedster and The Kryptonian Femme Fetale on the same screen!! I don’t think you understand how insanely powerful this episode is shaping up to be.

Let’s take a look at the tape and see what each hero will be bringing to the table: Over the past 2 seasons, The CW’s Flash has really bolstered his attack repertoire, but in reality, The Flash has only scratched the surface of his peak speed levels, but every time a loved one is on the verge of death, he taps into his real potential and jumps up to mach 2 or higher. Events that come to mind are when he time traveled and when the singularity was about to devour the city.

Ok I kinda made all those up, but hey its hard to nail down a dope name when Big Cuz done been around for 20 years and already snatched up all the good ones!

We all know what Superman has to offer and Supergirl’s inherited abilities are nearly identical. I’ll skip the basics like Flight, Super Strength, Super Hearing, X-Ray Vision, and Immunity to Diseases and Telepathy.

Heat Vision has been a staple since Post-WW II and Supergirl does the power justice by holding back on using them retinal rays of destruction until needed. If you were wondering, yes her optical beams are blue/cyan, but are just as powerful as the red version.

Her Super Speed is only matched by…well I think we can all guess who the only person who can match her speed, and I’m completely calling the foot race that is most definitely going down between these super powered goodie two shoes.

She possesses the chilling ability to blow gigantic gusts of air as well as classic Freeze Breathe.

Over the past week we have gotten more than just a confirmation of the episode. We’ve also gotten the title of the episode, Worlds Finest. We’ve gotten the date of the episode premiere, March 28th. We even were blessed with a behind-the-scenes image of our Central and National City heroes reppin’ those emblems. Not only did we get showrunner thumbs up, but on last week’s amazing episode of The Flash, our speedy friend traveled through a breach in Central City and saw an image of Supergirl flying in one of the images that flashes by while in the portal.

Dont know if that means we’ll be see Barry travel to another Earth where Kara aka Supergirl reigns supreme or what, but its a great head nod to the crossover episode that fans have been speculating about for months now.

Safe to say that even if you’re a Flash fan that isn’t interested in watching Supergirl, you will be tuning in to see The Flash’s guest appearance. On the other hand, if you’re first superhero show was Supergirl, then you might be intrigued to check out this Flash show everyone is calling the best superhero show on television.

We got those Flash recaps here and a few articles on Supergirl here. In this more and more saturated world of heroes on the silver screen, make sure you tune in March 25th. This unprecedented crossover between different networks shows us the incredible possibilities of a large scale shared universe on network television. What a time to be a nerd!