Warning: Spoilers. If you’re like me, you’ve been waiting for this for a while. I got the pre-sale tickets, re-watched all of the movies (yes, even the dreaded prequels), and obsessed over press about The Force Awakens for weeks. If you’ve been keeping up with all the press about the movie, you know it’s a big hit, and it was definitely worth all the fuss. But despite my feelings of unadulterated joy as those rolling credits began, I must admit that The Force Awakens is far from perfect. So here’s my review of the good and bad of Star Wars: The Force Awakens, chock full of spoilers.

The Cast: Well, duh. First off, neither of the two main leads are white men. Secondly, they’re awesome. Rey (Daisy Ridley) is strong, independent, and brave — plus, she’s a sand-surfing, First Order-fighting, Force-using character who can pilot the Millennium Falcon with no problem. Finn (John Boyega, a BNP favorite) is funny, an unlikely hero character who wants to escape the clutches of the First Order but ends up back in the middle of the action because of his loyalties. The anger and sorrow in Adam Driver’s Kylo Ren make him a formidable — and entertaining — antagonist. Driver, with his lanky shape and drawn face, certainly looks the part (so much so that I wonder how this guy played a part on Girls), and Ren’s many temper tantrums recalled the fury of Anakin Skywalker without the painful delivery of Hayden Christensen. He hasn’t been getting as much press as his cast mates, but Domhnall Gleeson presents a perfectly detestable villain in General Hux. It’s great to see Harrison Ford, Carrie Fisher, and Mark Hamill in their classic roles as well, in order to usher our fresh, new protagonists — and antagonists — into the next era of the film franchise.

BB-8: No one can replace R2-D2. Ever. I went into this movie thinking that, and I still believe it’s true, but if anyone could come close, it would be BB-8, fittingly based on the droid George Lucas originally wanted to introduce in A New Hope instead of R2. He’s as cute and quirky as R2, but his thoughts and emotions come across even more clearly through his physicality. The scene when Finn is trying to convince BB-8 to reveal the Resistance’s base? Priceless. And who knew that a droid’s reaction to its owner’s supposed death could be so heartbreaking? I’m all about BB-8 and can’t wait to see more of him.

The Lightsaber Battles: Let’s be honest: The lightsaber battles of the original films weren’t great. They were exciting when we were kids, but nowadays, it’s pretty hard to impress an audience that watches graphically violent shows like Game of Thrones or movies with Avatar-grade special effects. In fact, you can probably find some pretty badass lightsaber battles by just searching on YouTube. (Or you can watch the lightsaber version of “Hotline Bling” — to each his own, I suppose.) They got better in the prequels — at least when the neon orgy of special effects didn’t get in the way. But as troubling as the prequels are, you still have to admit that the lightsaber battle between Qui-Gon Jinn and Darth Maul, and later between Obi-Wan Kenobi and Darth Maul, was awesome. And that was the bar for this movie. Fortunately, the lightsaber fights turned out to be great. Kylo Ren is entertaining to watch, and the details of the scenes — the dark, snowy woods; the sound and sight of Ren’s lightsaber cutting through the trees — are what really make the scenes great in a way that the other movies cannot match.

The Humor: The Star Wars movies have always been funny, though that humor was not always intentional, as in the case of George Lucas’ criminally abortive attempts at dialogue. And of course there was the excruciating attempt at comic relief in the character of Jar Jar Binks. But part of the appeal of the series has always been its campiness. I don’t see J. J. Abrams as the kind of guy who’d be willing to bring that campiness back; it’s easy to appreciate in retrospect, but there is no shortage of ways in which it could go wrong in today’s box office (though if you want a good example of modern-day camp, check out Jurassic World and see Chris Pratt channel the glory of Indiana Jones). So if Abrams is going for laughs, he’s really going for it. He’s got a great sense of comic timing, and the laughs are unexpected but much appreciated in such an action-packed plot.

The References to the Good ‘Ole Days: “I’ve got a bad feeling about this.” This movie feels new without branching too far away from the old movies we know and love. Abrams really toes the line between nostalgia and the shiny, new stuff. For example, the badass Starkiller Base, which is basically the Deathstar, version 3.0. We’ve got similar bad guys and similar situations, but the stakes are higher — just the way it should be. 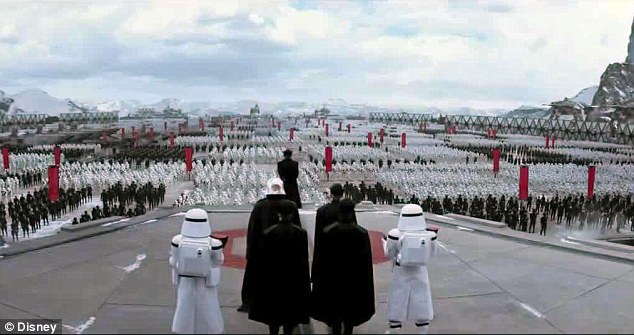 Supreme Leader Snoke: Why does this guy look like an oversized orc? In movies, especially of the epic-space-odyssey type, you want a good villain. You want a villain who you can really hate or respect or sympathize with. And first impressions are key. We have no information on Snoke, except that he’s tight with the Dark Side, trained Kylo Ren, and is the big bad behind the First Order. And we don’t even really know what he looks like, because what we’re shown is actually a hologram. That’s all fine and good — after all, I appreciate a bit of mystery in my villains; Darth Sidious was the master of wheelings and dealings behind the scenes — but at least give me someone who doesn’t look like a J.R.R. Tolkien character who’s been blown up to the size of a balloon in the Thanksgiving Day parade. You go too big and you’ve got a cartoon character. Remember Josh Brolin’s Thanos? Exactly my point.

The Pacing: This was the film’s biggest flaw. From the onset, we’ve got action: villages going up in flames, fights, escapes, chases, and so on. And it doesn’t slow down at any point. It makes for an entertaining movie, but the plot and characters suffer. It’s the typical action movie syndrome: If you’re not very confident in your plot or backstory, if you’re looking to create an easy seat-filler, or if you have too much to say and only two-and-a-half hours to say it, then just add more explosions. Unfortunately, that kind of film-making is what makes the seams show; suddenly everything seems inorganic and unbelievable. Too Many Coincidences: How many steady strings of coincidences need to take place for a Resistance pilot to be tracked down by the First Order, meet a Stormtrooper with a moral backbone who helps him escape, in order for that Stormtrooper to find our badass protagonist, who has the droid of the Resistance pilot, which gets tracked down by the First Order, causing our badass protagonist and comical Stormtrooper to search for a ship to escape in, which leads them to a ship that happens to get blasted, causing them to be left with only the Millennium Falcon, where they happen to meet up with Han Solo and Chewbacca just a few minutes later. See how many coincidences it took to get from point A to point B? Way too many for me.

Too Much Stuff: Part of the issue seems to be that Abrams had more material than he could fit into the time frame. In the end, though Han Solo’s presence in the film is great, he doesn’t seem to function as more than a means to an end. He doesn’t actually influence the plot very much, except for his death, which presumably will have emotional consequences for Kylo Ren and help in his character development in the next movie. The emotional weight of Solo’s death is dependent on the fact that audience members remember Solo and love the epic anti-hero from the original series. But if we just look at Solo alone (or solo, if you’ll allow me just one space-tastic pun in this review) in this movie, we don’t get enough time with him to really set up his tragic ending.

And the scene with the two gangs and the weird spaghetti monsters — what purpose did that serve? That seemed like a cut. As did the scene with Maz Kanata, in which Solo asked her how she got Luke’s lightsaber, and she responded that it was “a story for another time.” That always feels like a cop-out to me. Sure, you may want to retain some mystery behind a character, but usually it’s just a way to say, “Yeah, we know this is a loophole,” or “Sorry, we don’t actually have time to explain this,” just to sate audiences in the meantime.

So Many Questions: In general, the release of information is worth noting throughout the movie. We don’t really know the backstory behind the characters or the plot. How, exactly, did the First Order start? Why did Luke disappear? Why is he so important to get ahold of? (We know Snoke is scared that Luke will train a new Jedi and the Jedi will rise again, but how does he know that for sure?) If Luke wanted to disappear, then where did this map come from? Who is Lor San Tekka (the old dude who died like five minutes into the movie), and how did he get the map? The questions go on and on. Of course, the writers are giving themselves plenty of room to breathe for the next movie. With this many unanswered questions, audiences are sure to return for the answers, and this insures that the writers have somewhere to go. But on the other hand, we’re intentionally left with a very small piece of the puzzle and the end result can feel a bit incomplete.

Too Unbelievable: The pacing of the movie even hindered my ability to fully enjoy Rey’s badass manipulation of the Force. Don’t get me wrong; I thoroughly enjoyed it. I just didn’t find it believable. How does Rey, after having just found out about the Force and having never had any type of Jedi training (or even seen a Jedi in action, for that matter), have such a handle on the Force that she can control a Stormtrooper and match Kylo Ren in a lightsaber fight? I love Rey and think she’s magical, but not that magical.

…And Then Luke Happened: And then, of course, there’s the final scene with Luke. It’s the big moment that we’ve all been waiting for. Everyone’s been racing to find Luke, and everything that has transpired has been because he’s the last jedi, and he’s out there somewhere doing who knows what (yoga on the mountainside? Years of Candy Crush? Watching Naruto, including all the filler arcs? Who knows?). But one hop into the Millennium Falcon, and they get to him in about a minute flat. If that’s not anticlimactic, I don’t know what is.

All this aside, The Force Awakens is still undoubtedly good, and certainly lives up to its hype in terms of the franchise as a whole. If you’re a fan and haven’t already, make sure to check it out. And if you’re not a fan — well, get some popcorn, invite some friends over, and check out these movies, because these definitely are the films you’re looking for.