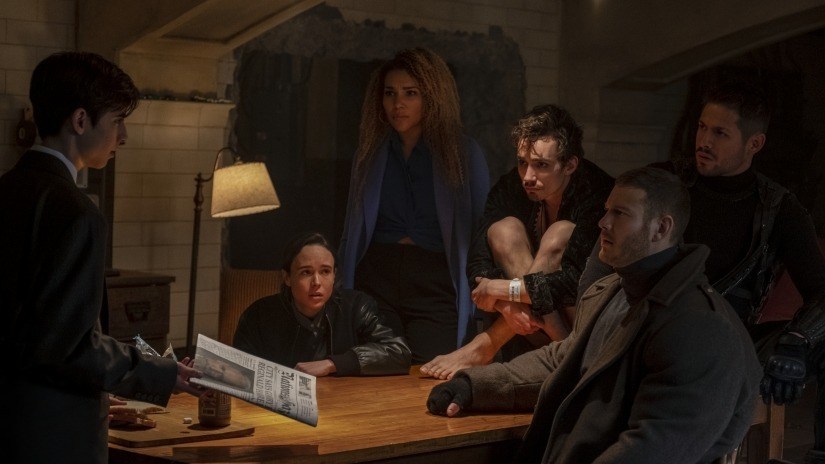 With the full release of Netflix’s The Umbrella Academy, we here at BNP want to take time to reflect on our feelings about the show. Kenny comes back to give you his final thoughts after having early access to the first five episodes, and Aisha gives her take after binge-watching. Check out our feelings and then hit us up with yours. 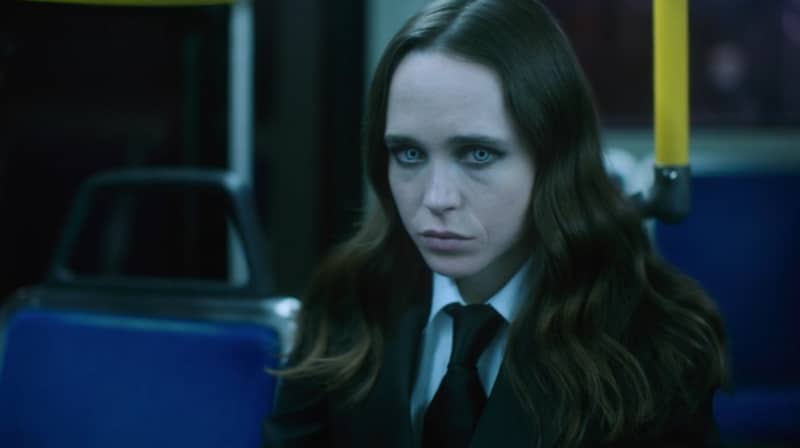 Get Your Umbrellas, because spoilers are falling like rain.

First off, I must say that I stand by the things that I said in the earlier review: the sisters bring the drama, the brothers (Luther, Diego, and Number Five) aren’t the best, and there needed to be more Klaus and Ben.

Allison and Vanya have a great big (successful) sister vs. little (needy and unsuccessful) sister vibe that is part of the central drama. (Think Marsha vs. Jan.) This dynamic leads to Vanya, who has an absolutely devastating power, to almost kill Allison, slicing through her throat, and rendering Allison unable to use her voice ability. That was in episode 8. 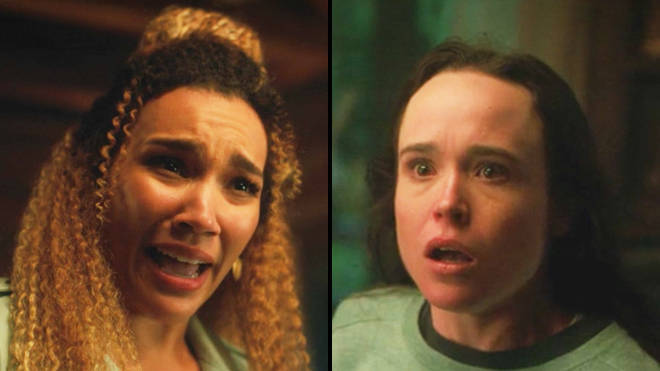 When I got to the end of episode 5 of the early access, I wasn’t really feeling the show, but episode 5 is when we first see Vanya’s power emerge. Going into the episode 6, that was the turning point. The back half of the season was full of action. Everything came to life. It wasn’t as brooding, nor focused on Diego, Number Five, and Luther, who for me really dragged in their personalities. That said, I have a few additions to my initial reactions.

Diego, and especially Number Five, show some true moving beyond their one-note angry daddy/mommy issues and better than you know-it-all-ness respectively, however,….LUTHER STILL AIN’T SHIT! Luther was boring as paint drying in the first five episodes. In the last five, he makes one dumb decision after another. And in all honesty he is the cause of the apocalypse. He is so busy thinking he knows what’s best because he is blinded by his love of Allison, but he doesn’t heed literally everyone’s warnings to not lock up Vanya. This drives Vanya into madness and releases “The White Violin” inside of her, something that I basically liken to Phoenix’s appearance and destructive force in 2006’s X-Men: The Last Stand. Long story short, FUCK LUTHER! 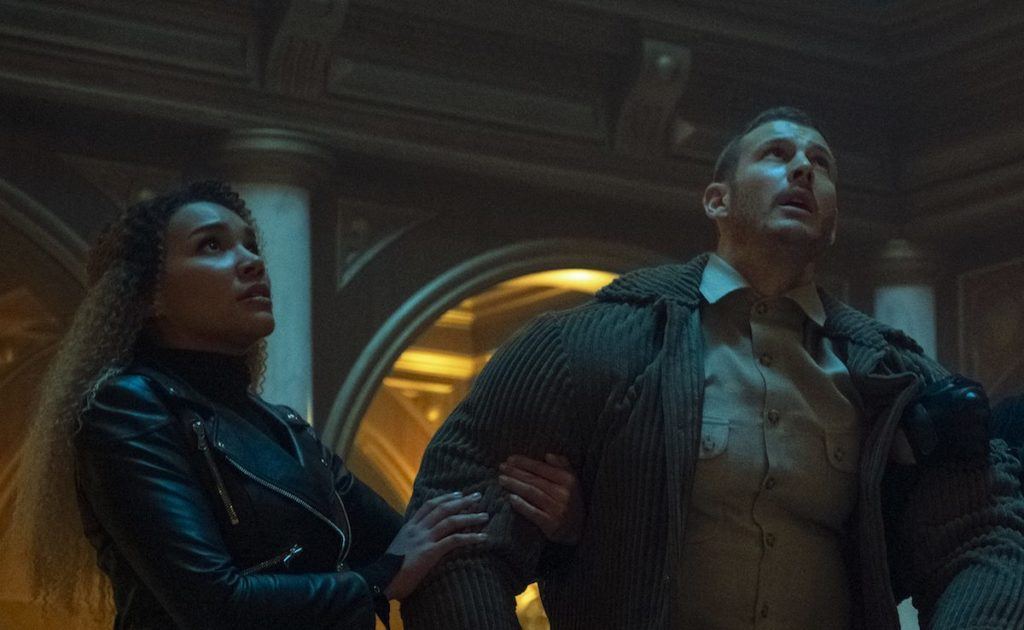 Klaus and Ben remain the two I want to see more from. The final episode gave me so much hope for season 2 in seeing them (especially Ben) be more active. During Vanya’s “Concerto in Apocalypse Major,” Klaus’ powers level up. He is able to summon Ben not only for his brothers and sister to see, but so that Ben can use his “nightmare” powers to take out some unknown henchmen (who are probably just part of the Commission that works behind the scenes to make sure that the apocalypse happens as planned). Klaus not only surprises himself, but it proves to his brothers and sister that he is now sober and able to conjure the dead in a reliable way. 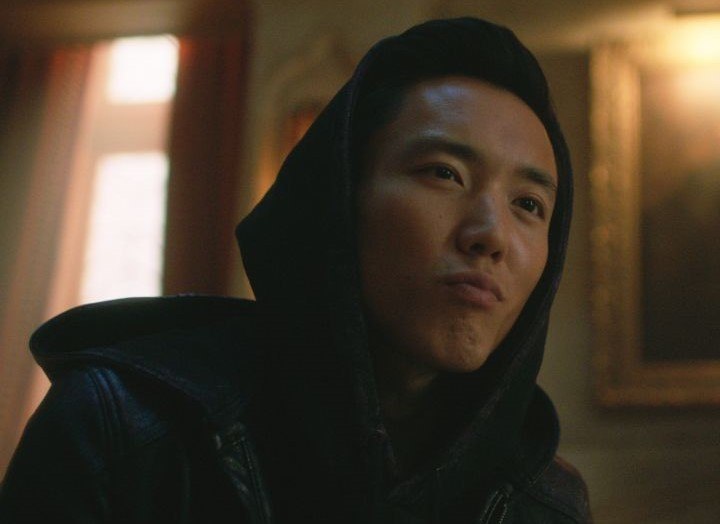 I wasn’t originally looking forward to finishing this season, let alone excited for a season 2. This still isn’t the best of shows, but it is definitely not bad. I am looking forward to seeing what happens now that they have pulled a Mighty Morphin Power Rangers “Rangers Back in Time” arc when Lord Zedd made them kids again. I was debating with a friend if this would be one of those times where either, 1) they will meet their younger selves, 2) they will somehow merge consciousness with their younger selves, or 3) they will just be young them but with their adult memories like Number Five was when he came back from the future to the present. Either way, we’ll see what happens when season 2 comes around. I’ll keep watching. 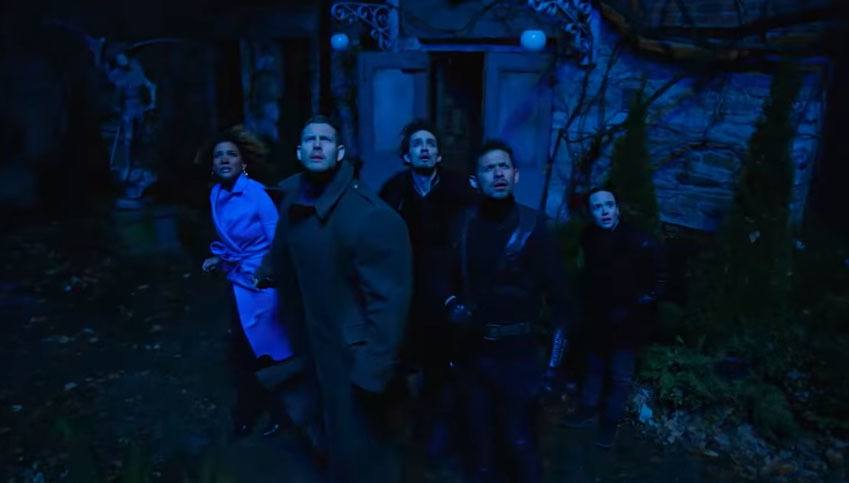 The Umbrella Academy is winning on levels we don’t yet realize (time travel reference). The intrigue and mystery of it all had me fiending as soon as I heard those two tones and watched that Netflix N draw across my screen.

The premise of 43 young women all being struck with immaculate conception and simultaneously giving birth in one day is a saga in itself. Only 7 of these babies are known to us…I kept asking myself, where are the other 36 powerful MthrFing kids! The world that is presented to us gives more than enough to fulfill my Virgo need to explain, categorize, and solve. I was constantly trying to figure out the answers: How does the future come to pass? Who is responsible? Why is Luther so huge? When and why did Pogo get made? Why is the family such a jackass to him? Why do Luther and Allison like each other, were they not raised as brother and sister like the others??

I was able to figure out early on that Number Seven aka Vanya (Ellen Paige) was suffering from Phoenix affliction, and the end of the world was in her hands, but how we get there was the real fun. This was The Haunting of Hill House ignoring family trauma while trying to understand their true power and place in the grand scheme of things — superpower Avengers version. 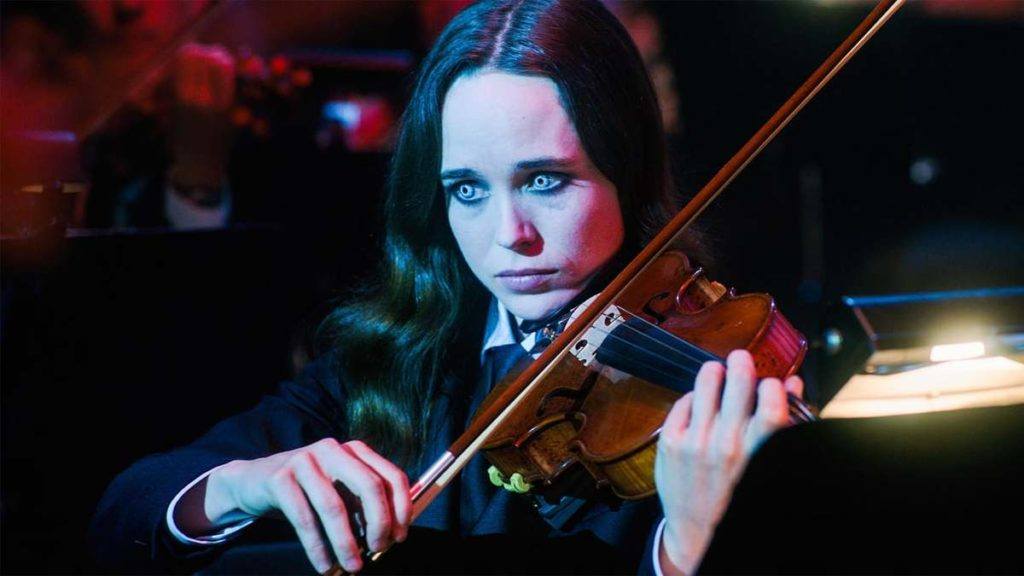 All of these questions can overwhelm someone I am sure, but it is the questions that help this show thrive. We are given a story with holes because the holes are the ins and outs of where these characters fit. How they fit in the future can change everything. Everything works in tandem. The relationships between the siblings and the father, mother, and uncle Pogo affect the use of their powers. This in turn impacts their interactions with each other and the world. This creates the course of the future which results in their one true mission: to prevent the end of the world.

Now, I generally have an issue with shows and movies that attempt time travel, they are always trying to close a loop or create a loop that just doesn’t make any sense. Time travel alone is a complicated topic to tackle. Umbrella Academy made it fun, practical and displayed its inevitably so well. The Commission that has found a way to exist outside of time, embedded in a specific time — it is so convoluted and clear — the perfect personification of time itself. Magnifique! And Number Five’s obsession with manipulating it mirroring our relationship with time as humans, as if we can manipulate it. 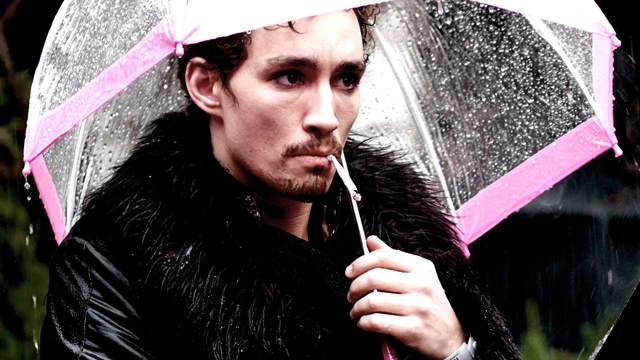 At the center of all of this for me is Klaus. He is the boy who cried wolf that we need, and the angel that The Commission needs as well. If you pay enough attention the decisions Klaus makes in the story simultaneously maintain the inevitability of the future and pivot the timeline as well. He is responsible for Harold Jenkins and his drug problem, which renders his power unpredictable so he can’t communicate with his father at the opportune times. But at the same time Klaus’ ability is one of the most powerful as a link not through time, but through temporal planes! He can bring forth the dead — not like oh look at that person who died — he can bring them to the physical realm. Aside from him being a pivotal character, Robert Sheehan is a god-like talent. He was my favorite in the British series Misfits and when he left, I left that show. Seeing him work in this wild, hilarious tortured way again was phenomenal and a real treat. 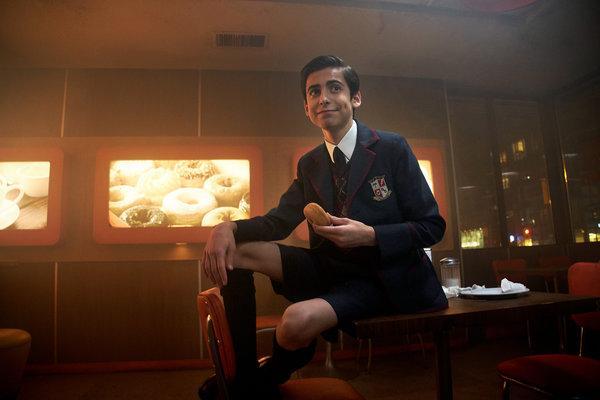 Speaking of treats, I want to shake the hand of Aidan Gallagher who played Five, being an arrogant 58-year-old in a 13-year-old’s body was never done better. His tact and drive brought the gravitas to the show and added to its playful side. Dolores wins for best supporting of course. I cannot rave enough about these two performances.

In the end, Mary J didn’t give a award winning performance, but did her thing. It wasn’t distracting.

The show brought a small element of incest so Game of Thrones level accolades could be a thing. It gave me all the X-Men Phoenix saga I won’t get with Dark Phoenix. One could find issues with the show, but the issues are important to the plot, to the forward, backwards, sideways motion of the story. I was worried it was going to close everything up tight and we wouldn’t get a season 2 but no, I am pleasantly surprised that they will find a way to exist outside of time as well. 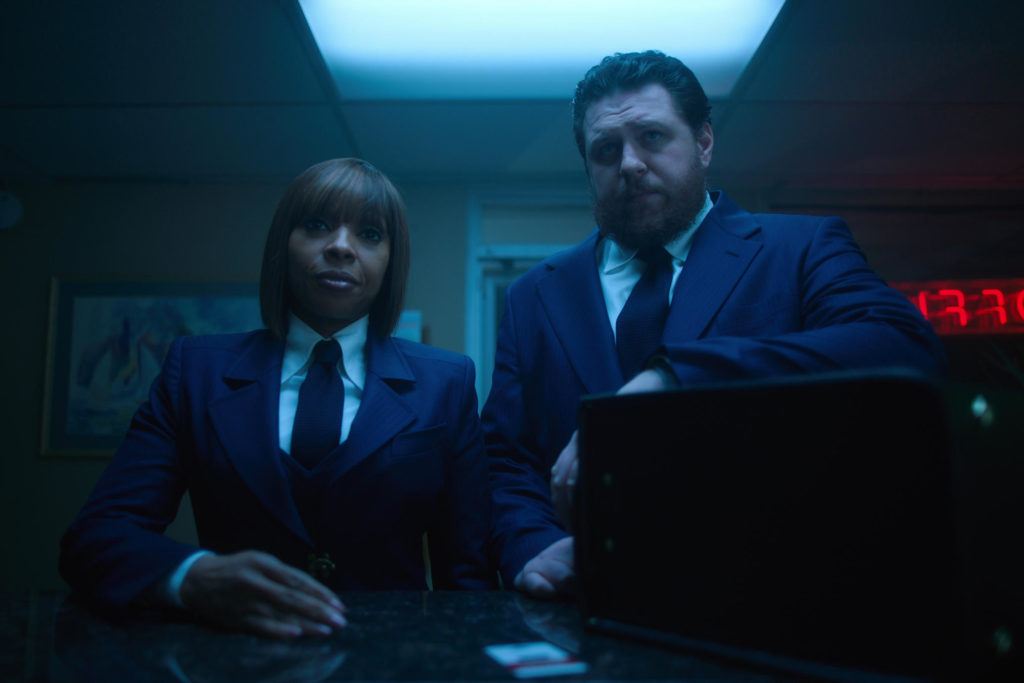 Our feelings on The Umbrella Academy run from tentative enjoyment to all out hype. We think that we took the rain like we Supa Dupa Fly….Missy Elliott anyone? Anyway, no word on a renewal by Netflix just yet, but with all the positive reviews and buzz it’s been getting, we’re pretty sure season 2 will be on the way eventually. And when it does, we’ll have our umbrella ready for the rain.