(n) – the highest point of a hill or mountain

The Summit of the Gods (originally Le Sommet des Dieux) is the animated adaptation of the graphic novel of the same name by Jiro Taniguchi (itself, based on a 1998 novel by Baku Yumemakura) that details the intertwined stories of Makoto Fukamachi and Habu Joji as they attempt to answer the above questions and also the entire history of climbing as a whole.

The movie opens up with a short introduction to George Mallory and Andrew Irvine, who were actual climbers who attempted to summit Mt. Everest in 1924 but mysteriously vanished. As the film goes on to explain, the first documented ascent didn’t happen until 1953; however, rumors in the climbing community say that Mallory’s lost camera could contain proof that Mallory was indeed the first to achieve the ascent. And while the camera kicks off the story as Makoto Fukamachi is offered a chance to purchase the supposed legendary item only to see it reacquired by its owner, the reclusive climber Habu Joji who then fades into a back alley.

And thus starts the two tales proper. One of the investigative journalist has a passive interest in climbing that becomes an outright obsession, and the other is an ambitious climber whose entire life has been devoted to the mountains. The Summit of the Gods combines two of my favorite types of stories: sports anime and stylized documentary. While The Summit of the Gods is not based on true events, it does contain a breadth of knowledge about climbing and provides a brilliant character study of its dual protagonists.

Right off the jump, the first thing you’ll notice is that The Summit of the Gods is beautifully animated and scored. Director and co-writer Patrick Imbert did a wonderful job of guiding the team to create an enthralling experience. The gorgeous set pieces of various mountains are absolutely breathtaking, and the music truly captures the majesty and emotions of the climbers, in both success and failure. As we bounce between the present of 1994 and the preceding decade of Habu Joji’s climbing career, we are treated to a visually enthralling feature. Fukamachi’s old school brick laptop and ancient browsers help solidify it as a brilliant period piece, and Joji’s different climbing efforts take us to a variety of mountains.

One thing I appreciate is that The Summit of the Gods tells the viewer enough to appreciate what is going on but never goes overboard with the exposition. We get lots of exposition about the nature of climbing sports but not a lot of explanation of the mechanics of climbing per se. Terminology and jargon like specific knots or what exactly a bivouac are thrown around casually, but it makes sense given that both of the protagonists are well versed in the climbing and wouldn’t spend time explaining the apparent. It leads an authenticity to the work, and I’m sure actual climbers will be able to appreciate their sport getting such a spotlight.

The vocal performances of the cast were stellar in both French and English, although given that this is a Netflix production, the subtitles for the English dub are comically incorrect. This complaint is true of any dub on the platform, but it’s one I won’t hold against the film. With a ninety-minute runtime, the movie progresses at a reasonable speed although there are occasions where the pace drags ever so slightly as it gets a little meditative. For the most part though, switching gears between the journalist looking for the truth and the climber making daring attempts and pushing past his limits is exceedingly entertaining and makes for a very satisfactory moment when the two characters inevitably meet.

Don’t let The Summit of the Gods slip under your radar. It is a moving story that captures the grandeur of climbing and holds a deep reverence for history and nature and one that will captivate you. 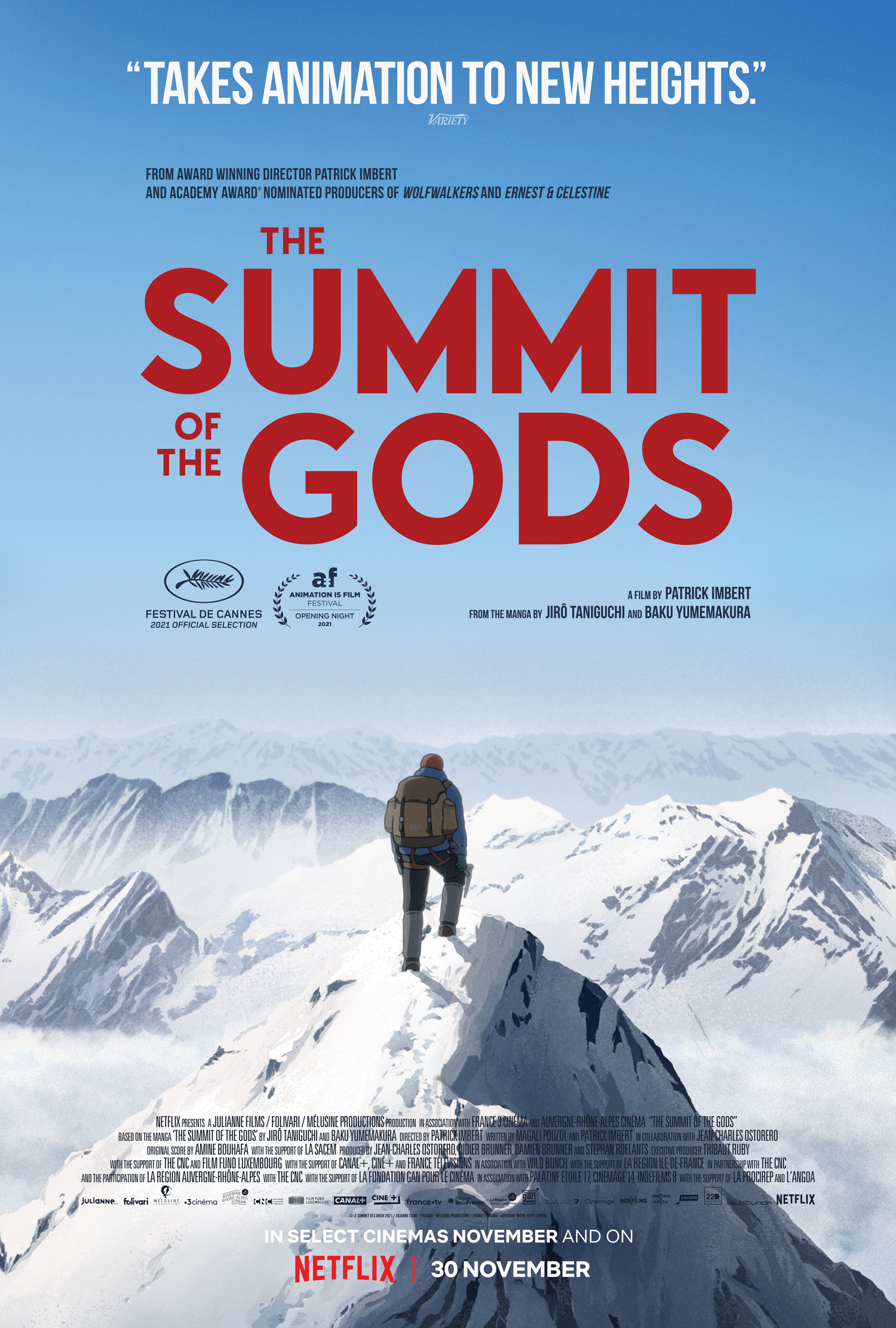