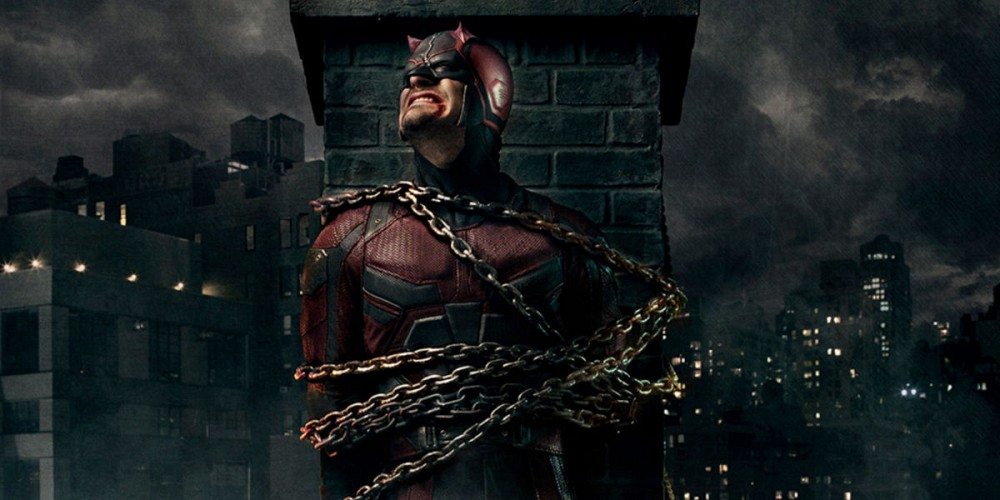 And you say Hell’s Kitchen!

By now, you probably binged all the way through Daredevil season 2, unwittingly saw the next big comic book media release in Batman v Superman: Dawn of Justice, and immediately said to yourself, “Why can’t they all be like Daredevil?” Because you probably watched 13 episodes in 3 days or less and might have forgotten why you loved it, here are ten reasons why.

Episode 1: “Bang”
The first time we see Frank in action, we don’t actually see Frank. What we see are no less than about 500 rounds of the hot shit spittin’ through the doors and windows of an organized crime pow wow for the Irish. It looks like 5 guys outside releasing the flutes on these cats, but we know it’s one muthafucka named Castle, and he’s built for this. And if you thought that was too straightforward, your boy stops shooting for a second just so he can physically throw a dude through the window… then proceed to keep shooting. You remember that part from Last Man Standing with Bruce Willis when he massacres an entire room full of armed bodyguards enjoying their dinner? Well, there wasn’t even a girl upstairs for this shit.

Episode 3: “New York’s Finest”
For the sake of inclusion, Foggy is too big of a character to leave off this list completely. Make no mistake, I still think his portrayal is completely landfill, but he had few shining moments this season, even if they went on a bit Long. Looking for Murdock, Foggy goes to the hospital to holla at Claire and see if she’s seen him. The hospital basically lookin’ like the fall of Saigon though ‘cuz there’s a war going on out there and nobody is safe. Not innocents, not gang affiliated, not even White people are immune to the violence going on out here in Hell’s Kitchen. When two cats with about 17 tatted tears between them square off in the middle of the ER, Foggy talks them down on some “y’all do this shit and you might as well sign up for the long stay in Riker’s fam, ‘cuz you ain’t never coming out.”

Episode 12: “The Dark At The End Of The Tunnel”
The eventual reveal of Elektra’s background as Black Sky tells why she’s a slight homicidal maniac. Or… she could just be a completely detached killer that enjoys murder without thinking twice about it. This is on the list, but relatively low because the fallout was handled pretty hastily. Elektra was like, “What? I’m Black Sky? No, you lied to me. No, that makes sense. Yes, this is what I am Matthew, I can’t change my destiny. Fuck it, let’s merk all the people currently worshiping me and act like the last 2 minutes didn’t even happen.” 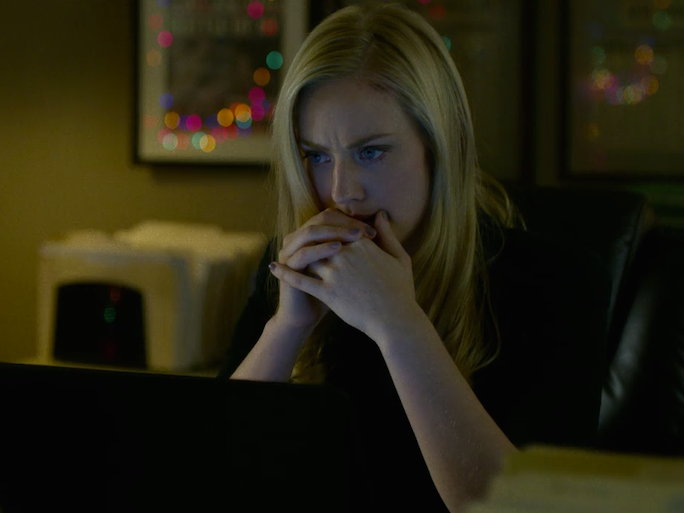 Episode 10: “The Man in the Box”
One of the unexpected successes of Daredevil season 2 was the bond formed between Karen and the newspaper Editor, Stan. After Nelson and Murdock Law Firm performed Seppuku on itself, Karen is still searching for answers. And a job. She takes up Ben’s old office with Ben’s old resources and Ben’s old boss looking over her. After the murder spree that everyone assumes is Castle’s handiwork (except Karen), Karen goes to get some important files from her apartment. When Stan gets some cops to go with her, Karen lashes at him, “You would have never pulled this patriarchal shit with Ben! I can take care of myself.” To which Stan answers, “You’re right, and I’ll never make that mistake again. Not about someone I care about.” They’re both right, but this was mostly a sobering reminder of the how Ben’s death affected these characters and how Stan blames himself for it happening. It almost makes up for Karen having the Lois-Lane-in-Zach-Snyder’s-DC syndrome where she happens to be around every major situation in the show. Almost.

[title type=”h2″]6. Elektra Slips Into Something Sexy for Matt, Like Kidnapping[/title] Episode 5: “Kinbaku”
After taking Matt on a whirlwind love affair and opening Matt’s nose ALL THE WAY, she lures him to a mansion she claims is a client of her father’s that will be empty. She forgot to mention the house belongs the man that put a hit out on Matt’s father and she came here with the sole purpose of finding redemption for Matt. Matt gets to try out his papa’s lessons on dude by working him over and gets to unleash all that pent up angst about his pop’s murder. Of course, when he stops, Elektra is like… um, you know you supposed to kill dude, right? We should’ve known then. This could’ve been the scene where Elektra slit the assassin’s throat and then immediately asked Matt if she still loved her, but since this is the first time we see that something is wrong with her, it’s good here.

Episode 10: “The Man in the Box”
After Frank’s escape from prison, Murdock is looking for answers and he puts it together that Fisk probably had something to do with it. Murdock is there (and still only known to Fisk as Matt Murdock, attorney at law), but HE TALKIN’ THAT SHIT like he’s got the red suit on and breaking limbs instead of the code of ethics. Fisk, of course, refuses to give Murdock the info he wants, so Murdock figures he’ll threaten the Lady Friend that Fisk can no longer see. What Murdock doesn’t realize (somehow) is that Fisk runs this prison, so when he loses his temper and starts pounding Matt’s face into the table like he was making bread from scratch, everyone including Matt himself is taken off guard by it. Bloody and (within his cover) defenseless, Murdock listens to Fisk threaten him and Foggy. It all culminates with Fisk throwing Murdock’s clever threat back at him. Welp.

I’ll chop both of the heads off that snake and I’ll spend more than $6 on postage to bring you down.

Episode 11 – “.380” and Episode 10 – “The Man in the Box”
One of the cool things about Daredevil is watching the evolution of his costume, armor, and weapons over the two seasons thus far. The final piece of the puzzle are the batons that Daredevil is famous for with the grappling hook abilities. It’s a cool moment that makes you legitimately say, “’bout fuckin’ time.” But before that happens, Elektra is taking Murdock’s advice and leaving the country. At a private hanger, she seems to be on the rebound with a handsome globetrotter until it’s revealed that he was actually sent by Stick to kill her. The fight is intense and one of the better late-season fights (for what must be 200 of them), but when dude pulls out the sais to try and take Elektra out, you just knew it was gonna end with him being a pin cushion… and that she was walking away with a parting gift. Episode 9: “Seven Minutes in Heaven”
Unpopular opinion here: At some point during Daredevil, probably after Elektra’s introduction, most of the fight scenes get pretty boring. Especially since almost all of them are against The Hand ninjas in some fashion, so it’s just Elektra and Daredevil beating up on faceless ninjas that don’t mind throwing their life away. One of the exceptions, however, is when Frank does the deed that Fisk requested of him in cell block A, then double-crosses him and leaves him to die with inmates who discover Frank killed their leader. Frank Castle is HERE FOR THIS and kills all these cats. Like all 12 of them. The narrow cell block creates a similar claustrophobic feel to the hallway fight scene in season 1, and we see that Frank is a survivor in the truest sense. It is probably the bloodiest and most gruesome scene is a show that already has lots of slit throats, broken limbs, and decapitations… but this is a prison brawl, fam.

Episode 3: “New York’s Finest”
Look, I don’t have to name this shit, you already know what it is. While I still feel like this was a very good season of TV, I still think episode 3 was the best episode and I’m not sure too many other episodes were close. After being chained up on the room by Frank, Daredevil gets free and incapacitates Frank, but not before Frank declares war on the biker gang across the street and these dudes are coming to collect his fade. Daredevil has to begin this fight against the whole Hell’s Kitchen chapter of this Biker Gang with an empty gun taped in one hand and the end of a thick-ass chain wrapped around the opposite wrist. When it starts, you’re like, “oh, it’s another hallway fight scene like season 1,” until these cats descend about 4 floors down with Daredevil giving out so much work, he dropped the unemployment in the state of NY about 4 percentage points. Perhaps the coolest part of this fight is when he gets to the bottom, takes out the last dude (for the moment) and legit just sits on dudes back because he’s so tired. Then, he goes through the door, travels down another flight of steps just to see 3 of the biggest guys in the crew waiting for him. I know, long form tracking shots are the new “dragging a weapon ominously behind you on the way to a kill,” or a distant cousin of “walking away from an explosion in slow motion,” but it’s still so damn good when it works that we don’t have to end that shit (with good directors) any time soon.

Episode 3: “New York’s Finest” and Episode: 4: “Penny and Dime”
The only thing that could top one of the Top 5 Best Action Sequences in TV history is probably a couple of the best-written dialogues we’ve seen from a comic book show. The first is the long-form conversation in episode 3, where Frank and Daredevil discuss their differing ideologies that culminates in Daredevil asking if Frank believes in “hope,” to which Frank replies, “you want to talk about Santa Claus, Red?” As great as that was, it still finishes second to the next episode, after Daredevil saves Frank and Frank tells the story of how his family was murdered. As they sit there propped up in a cemetery, John Bernthal delivers probably his best performance, period, tracing his coming back from Afghanistan, his daughters reaction, and the loss that was coming. Of course, this is capped off by Daredevil being moved to tears by Frank’s story. It’s a cool thing, to see the vulnerability of the heroes while their mask is still on. I’m just not sure what compares to these moments in a season full of great vignettes.