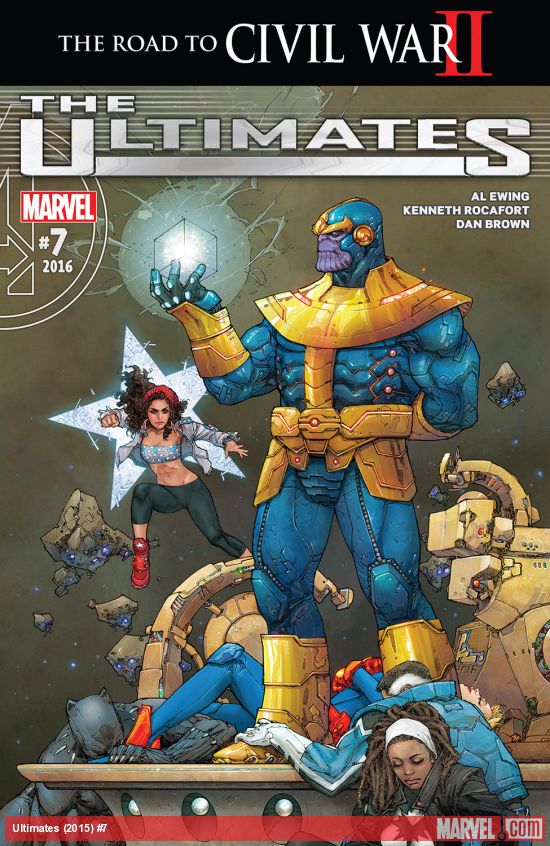 Awwwww shit, here we go. Al Ewing wastes no time showing off his multi-tasking skills when it comes to team books. We saw it in Mighty Avengers and we are seeing it here in The Ultimates now as well. We focus on what looks like the makings of a team that will be divided come Civil War II as it will cross over with that event. We see Carol having to deal with seeing the time stream raw thanks to Galactus, and then dealing with being blindsided by murmurings of cosmic cube tamperings happening on Earth. We get introduced to an Adrienne Bradshear who is not only working with the team dealing with the cube reading but also the daughter of Adam Bradshear, The Blue Marvel! Whaaaaaat? There still so much about Blue Marvel we don’t know and his history is being added and revealed to us bit by bit.

Speaking of Blue Marvel, we see Adam talking to his former best friend and arch-enemy, Anti-Man, in a jail cell built specifically for him. T’Challa and America Chavez come in, and we see T’Challa get on his ol’ bullshit. There are two ways to handle Ant-Man: fair trial and death. Guess which one T’challa wants to sign off on? T’Challa’s position as King of Wakanda is now playing a part in how he has to interact with the team and putting him at odds with Blue Marvel. Ewing does a great job capturing the air of T’Challa as he doesn’t pull any punches on his will should the need arise for him to decide. The best part is watching America Chavez read the situation as T’Challa starts talkin’ dat shit.

Yeaaaaaah buddy! Talk yo shit, Chavez. It’s interesting as we don’t know the reason behind the comment, but in my opinion it’s her letting T’Challa know he may represent a multitude of entities but he’s still a man. Rocafort captured that scene well. I’ve noticed that that the paneling on this book really varies from how it’s been done traditionally, in blocks. Rocafort’s panels splash into one another and I think it has grown on me, but I’m still undecided. He does a great job on the final page when introducing Thanos coming into the picture (he’s on the cover, I ain’t spoil shit for y’all).

We’ve seen the science team that can do the impossible still fail, and how that is effecting them as a unit, and soon individually as well. This is a book for those that question the “why” of the universe and like to explore. Ewing and Rocafort keep putting their best work forward with this series.