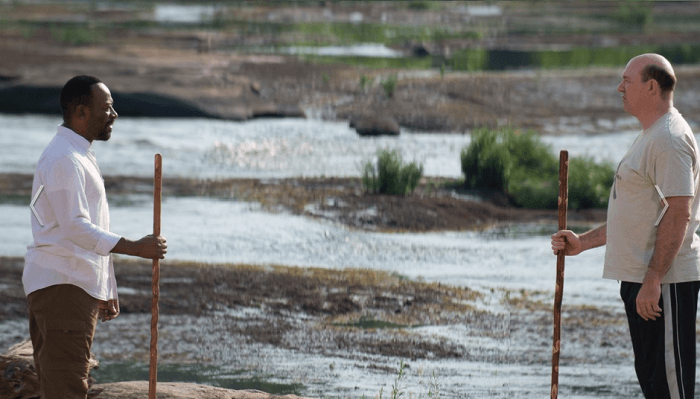 After the collective trauma fans of The Walking Dead experienced last week after the possible/probable death of Glenn, you’d think we’d see what happened to him this week. You were wrong. So, so wrong.

“Here’s Not Here” is all about Morgan and his journey from the point when Rick leaves him back in his booby-trapped house to when he shows up in Alexandria with the wisdom of a Shaolin monk trained in the mystical art of butt whoop.

After he being left alone, Morgan sets off on his journey to “clear” the world. He eventually makes his way to a campsite and makes it his duty to kill and burn anyone that he comes across – either dead or alive. He even gets his Vlad the Impaler on and has spears sticking out of the ground to trap folks.

One day, he’s on patrol and two men spot him. He runs ahead and waits for them to catch up with a long spear he made out of a tree branch. When they catch up, he pops out from behind a tree and stabs one through the neck, killing him instantly. He then strangles the other, younger man with his bare hands. At this point, his “clearing” has become therapeutic and he can’t seem to stop.

After finally clearing the area, he moves on and makes his way to a cabin where he finds a goat behind a fence. After a look of confusion at a goat somehow living alone, he hears a man ask him to not kill the goat because he needs it to make cheese. Morgan spots him out of the corner of his eye and lets off a spray of bullets from his rifle like they aren’t more valuable than gold. The man explains that he means him no harm and even offers to give him some food because he’s obviously hungry. As Morgan tries to follow the voice of the stranger, he’s knocked out and the camera shows an older, bald man with a pot belly and a Bo staff standing above him.

When Morgan wakes up, he’s inside the cabin, but behind the bars of a makeshift jail cell. The man introduces himself and says that he used to be a forensic psychiatrist, hired by the state to examine more than 800 prisoners who committed violent crimes. He’d like to let Morgan out and be cordial, but Morgan’s still so deep in guilt and despair for the loss of his wife and son, that he begs the man to kill him. The man declines, explaining that he’s a pacifist and that he hopes to help make Morgan whole again.

If we’re keeping it real, this episode could’ve easily been the story of one man bringing another back from the brink of insanity before they fell madly in love. All you’d need is “The Moment” by Kenny G playing in the background and a couple lingering stares.

There’s a montage of Morgan watching the man – who reveals his name to be Eastman – practicing stances with his staff in the woods, failing miserably at making cheese, and tending to his goat. Their exchanges are usually short, but still revealing. Eastman must have been a great psychologist because in just a couple of questions Morgan is explaining to him that he clears because he thinks that’s why he’s still alive. To kill everything in his path.

Eastman eventually explains to Morgan that he’s experiencing PTSD, like anyone in his position would. Eastman channels the Jedi we all have within us and explains that Morgan struggles to move forward through a symbolic door. Of course, this translates into a real life example when he reveals that the cell door was never locked. Which is hilarious because Morgan had already broken off the zipper of his jacket and begun his MacGyver-esque breakout.

Eastman gives Morgan two options: stay or leave. But he won’t allow him to kill him. Morgan jumps to his feet and prepares to attack Eastman. Within 5 moves, Eastman gets him on his back and makes him surrender. Out of frustration and confusion, Morgan goes back into his cell. Eastman opens the door to show that the invitation still stands, but Morgan angrily kicks it closed. Eastman then goes on to explain who he is. Out of the 800 patients he saw, he didn’t think that any were evil. Sure, they made some mistakes, were traumatized, or mentally ill. But not evil. Save for one man. He then tells Morgan that he was able to beat him so easily because of his study of Aikido, a Japanese martial art that focuses on using your opponents momentum, weight, and energy against them. After Eastman’s daughter found him in drunk tears one day, she gave him a lucky rabbit foot in hopes that things would get better. The next day, he found a flyer for Aikido lessons and got started.

Sidenote: As a man that studied Aikido (for three months), I can tell you that I never saw anyone with a Bo staff. If I had, I would’ve kept going just for that.

Morgan elects to stay behind while Eastman goes out to scavenge. While he sits there, he hears Eastman’s goat bleat while two walkers approach. Morgan comes to the rescue and kills both of the walkers. Eastman comes back and thanks him and has him follow him to a graveyard. While Morgan digs graves for the walkers, Eastman grabs their wallets and carves their names into pieces of wood to serve as headstones, teaching Morgan that every last life is precious.

Back at the cabin, Eastman shows Morgan that he has fixed his staff. And by “fixed” he means that he cut off the pointy end and made the rest of it a Bo staff. As Eastman trains Morgan in the skills of Aikido, the two become friends. Eastman then tells him of the one evil man he met, a convict by the name of Crighton Dallas Wilton. Crighton was so charming that he pretty much had everyone he encountered wrapped around his finger. Except for Eastman. Eastman saw through the act and learned that Crighton was a true psychopath. One day, the two were talking and it became clear to the convict that Eastman had figured him out and was going to do everything in his power to keep him behind bars. So Crighton stood up, smiled, and attacked Eastman. He would’ve killed him on the spot if not for his Aikido lessons.

Eastman did his part to keep Crighton on lockdown. But, one day, he broke out. The first thing he did was go to Eastman’s home and brutally murder his wife and daughter, who had drawn the picture he had hanging on his wall. The fugitive then went to a police station, turned himself in, and confessed that all he wanted to do was make Eastman’s life a living hell. After mourning his loss, Eastman built a cage in his family cabin with the intention of kidnapping Crighton, bringing him back, and watching him starve to death.

The next morning, Morgan takes Eastman back to his old campsite for supplies. It’s only there that Eastman sees just how far gone Morgan actually was. He asks him to say the name of the people he lost and the two have a special sensei/student moment. When a walker approaches from the distance, Eastman decides to let Morgan take care of it in hopes that his therapy can be completed. But when Morgan sees that it’s the same man he stabbed in the neck earlier, he freezes. At the last second, Eastman throws Morgan out of the way, only to be bit by the walker in the process.

After having another mental breakdown, Morgan asks Eastman to kill him (for the thousandth time) and expresses his frustration at them practicing at his former campsite, which he was extremely against. As a now-bitten Eastman carts the walker away, he responds with “Here’s not here.” I’d tell you that he’s saying that place is no longer what it used to be for Morgan, but I’d just be guessing.

Slipping back into his old ways, Morgan finds a walker, which he quickly stabs in the back of his head. He then sees a couple. The woman reaches into her bag and gives Morgan a can of food and a bullet as payment for him saving their lives – because they don’t know it was an accident and he almost killed them – and limps off into the distance. Morgan returns to the cabin, to find Tabitha (the goat) being eaten by a walker. He kills the walker and takes it to be buried at the graveyard. Morgan looks at a headstone and reads the name “Crighton Dallas Wilton.” Eastman, who’s hanging out in the graveyard, confesses that he did kidnap Crighton and bring him to the cabin. It took him 47 days to die of starvation. When he finally worked up the courage to go back to Atlanta and turn himself in, the zombie breakout had already started.

It’s during this conversation that Morgan finally makes it over the hill and becomes a changed man. He corrects a dying Eastman and lets him know that the world isn’t ending. As a final story, Eastman tells Morgan about how his daughter drew that picture onto the drywall of their old home. To get it, he had to trek through 30 miles of walkers, but he feels it was absolutely worth it.

Eastman lets Morgan know that he could stay in the cabin, but probably shouldn’t, because life is best when it’s shared with people. The two walk out to find a gun Eastman had stashed away so that he can go out on his own terms. Morgan digs Eastman’s grave and moves on towards Terminus.

In the present, we see that Morgan’s been telling this story to the member of the wolves that he encountered last season and had fought in a house in episode 2. The man admires Morgan’s attempt to try and change him, but he has to be honest. He only came to Alexandria to heal his wounds. If he lives, he’s going to have to kill every single person in Alexandria because those are the rules he lives by. Morgan leaves the man in the basement of the abandoned home, but unlike Eastman, he actually locks the door because he has something called common sense. He then hears someone yelling to open the gate and runs off. 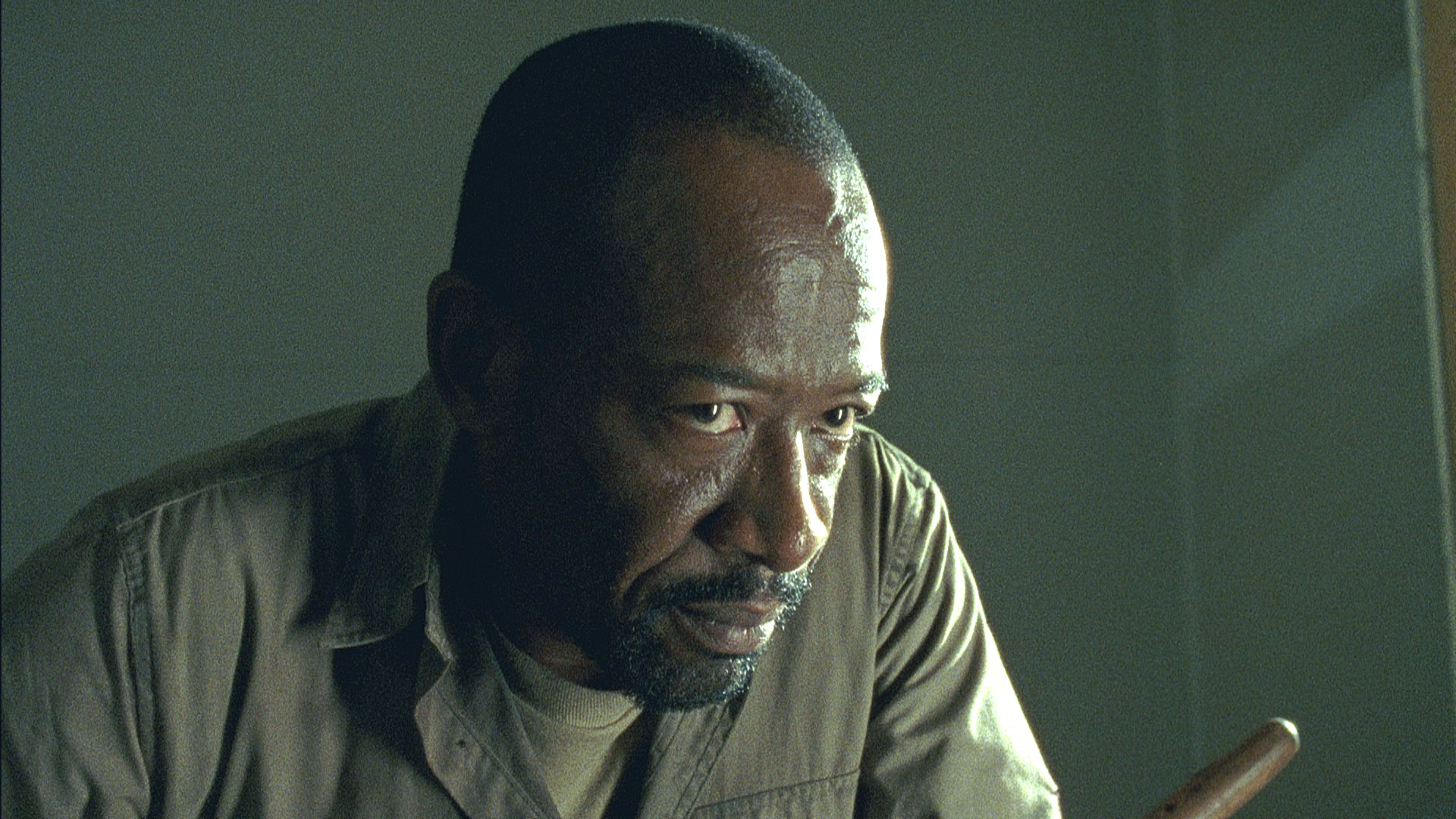 While this episode didn’t answer the burning question everyone had about Glenn’s fate, it was probably one of the best we’ve seen as far as mid-season episodes go. I didn’t even know I was that curious of what happened to Morgan outside of learning how to use a staff, but that doesn’t mean I’m not glad to know.