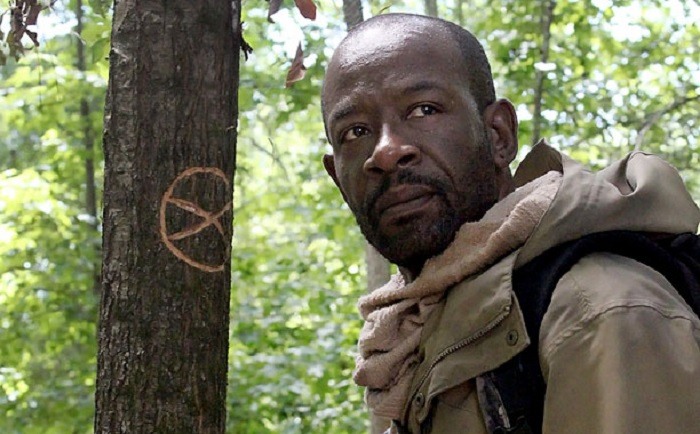 So we got the Morgan Backstory Episode “Here’s Not Here” and, well, I didn’t need that and here’s why.

Every once in awhile my ravenously hungry Kid will stand in the kitchen door and watch me get dinner together and whine. Or ask, repeatedly, when it’ll be ready. I will ask any one of a series of questions like “what was your favorite part of the day?” or “what’s your favorite color today?” Me and The Kid both know s/he doesn’t give one sprinkle-covered fuck about telling me these things. But we go through the motions. Me, because the instinct/ legal obligation to try to make the wee ones happy and to not be annoyed while I boil up this pasta is real. And The Kid because all kids are narcissists and can’t resist talking about themselves.

I say all that to say: You were stalling, AMC. I get it. You riding that “Is he or isn’t he?” train into the ground. You know fans are out here lighting candles on homemade altars hoping that Glenn scooched his ass under a dumpster and somehow managed to survive the literally thousands of walkers surrounding him.

You got people out here watching and rewatching The Talking Dead trying to parse the secret code in Chris Hardwick’s body language and choice of tie.

And I get it. You got commercials to sell and story lines to stretch out, but just so we’re clear: I see you and your mid-season slow-it-down-but-keep-it-simmering episode and I’m not going to get those 90 minutes back. I could’ve done without it.

5b. The only relevant part of that entire episode came in the last 90 seconds.

Nothing (Not. One. Thing.) in this episode changes or even affects the main story line. Not even a little bit. Morgan is still a conscientious objector. Morgan still makes bad choices for the group because his conscience and perhaps guilt over Eastman’s death (see #4) require him to. The Wolves still know where the camp is and strategically have the upper hand. Carol still isn’t excited about Morgan’s methods.

And, yes, I understand that not all episodes need to forward the major storyline, but I’m firmly in camp “they shouldn’t distract from it either.” I might think “maybe it’s just me that feels like this episode was a waste” if AMC wasn’t holding up a neon sign agreeing with me.

Exhibit A: Everything I need to know moving forward, I’ll probably get in either the “last week on…” segment OR on my DVR because I set it to start 2 minutes early.

Exhibit B: There’s nothing. Just re-read what I wrote above and sit with it for an extra minute. If you’re feeling extra, use that minute to re-watch the last minute of the show.

We get it. Evil people get killed.

Except Rick and Carol.But we’re not supposed to think of Rick and Carol as evil. What they do, they do to survive. What Eastman did, he did for vengeance and vengeance belongs to… um, the largely absent and unmentioned god that I think it’s safe to say has abandoned the TWD universe.

As soon as Eastman admitted to killing Crighton Dallas Wilton, we should have known.

As bleak as this landscape is painted, there does seem to be a code: If you revert to your basest nature and operate in pure survival mode – a mode that disregards law and prioritizes , you might live.

But when you find yourself on the evil side of the alignment chart, be careful.

This isn’t to say that goodness isn’t punished as well [looks at Glenn’s body or Glenn’s body covered in the blood of the guy who fell perfectly and directly on top of him.]


[divider type=”space_thin”]
Neutrality might be the way to go.
3. Lazy and convenient death of a kleenex character

Now, I’m no Aikido master, so I can’t really claim to understand the nuance of redirecting energy as a method of self defense. That said: did dude really just throw his back into that walker’s teeth?


[divider type=”space_thin”]
I just want to be clear on this The Walking Dead writers: the guy who successfully defended himself against Morgan’s attacks repeatedly? The guy with the creepiest backyard garden/cemetery ever serving as a testament to the walkers he’s killed in the past? The man who kidnapped a grownass psychopath from the side of the road in broad daylight? That guy?

That guy decided that instead of killing the walker that was attacking Morgan, his one and only human connection, the right move was to dramatically swing Morgan around, out of harm’s way, and expose his whole damn back to the already hungry and salivating walker.


[divider type=”space_thin”]
Maybe. Maybe if him and his girlfriend, fresh from a government refugee camp, stumbled upon Carol and Rick as they foraged for supplies. Maybe if he was daydreaming in his friend’s family home and looking at pictures of a life forever gone. Maybe if he just wandered out of soft ass Alexandria. But none of that is true.

Instead, the show introduced a potentially interesting character (who could have been added to the mix in Alexandria) with an equally interesting backstory played by a fine actor and, within 90 minutes LOLed at you for even slightly being interested in him. That said…

To be fair, I liked the Eastman character. A lot. Forensic psychologist? Dig it. Living alone in the woods like I would be in the event of an apocalypse? (Let’s be honest, I’d love to live alone in the woods now if I didn’t think Sallie Mae would strap on a pair of hiking boots and follow my ass). Word. Has an unnatural love of dairy products? My dude.

But. But. But. None of that is intrinsically white. Cast Eastman as a black guy. Then I don’t have to watch another episode wherein Morgan begs a white authority figure to kill him. Because I’ve had enough of that.


[divider type=”space_thin”]
Let’s backtrack: Eastman, large lovable white guy, is minding his own business in his country house when crazed and unpredictable negro Morgan, who has of course burned down his own home and killed two helpless white people, tries to steal his goat.

Benevolent Eastman calmly and firmly sets a boundary as all the parenting manuals encourage you to do: “Please step away from the goat; she’s not yours.” After being shot at, he calmly asks, “Why don’t you put the gun down and we’ll talk.” Meanwhile, Morgan is looking around trying to find the disembodied voice so that he can extinguish its life force.

Still, much like a parent talking to a child, Eastman repeats the boundary: “Put the rifle down and let’s talk.” I’ve had this same conversation with my toddler and so you see why I was started to get in my feelings, the angry ones.

“Okay last chance…” Wait, did Eastman just tell Morgan that he was about to get a timeout?

So now Morgan is in a cell. I’m not saying I would’ve let him steal Tabitha, but I’m starting* to get uncomfortable with the way that authority is portrayed on the show: white (Rick, Governor, Gareth, Herschel), associated with law enforcement in the pre-walker world (Rick and, now, Eastman), and oh-so enlightened (Herschel as a man of god and Eastman as a man of science and philosophy).**

So Morgan is in a cell in Eastman’s living room. On the brightside, there’s room service. On the downside Morgan is begging Eastman to kill him. For most of these scenes, Morgan is kneeling or sitting and Eastman is literally above him, looking down on him. [Another deep breath.]


[divider type=”space_thin”]
Eastman then gives Morgan a book, The Art of Peace. The implication is that if Morgan would just read this book and adapt its principles, he’d be happier. I distinctly remember a similar situation [turns on History Channel to watch a docudrama about the introduction and uses of Christianity on plantations] in American history. I’m not sure if I would read that book Morgan.

Morgan does need peace, though. He’s on some “I clear” and “Let me detail the ways in which I have killed people with my hands” shit. Eastman, never deterred by Morgan’s demeanor tries to find the good in him. Somehow through persistence and an overwrought door metaphor, he begins to find it. Despite Morgan threatening to kill him, repeatedly.


[divider type=”space_thin”]
Maybe this is the thing that really bothers me: the Christ-figure of Eastman.

Eastman takes on Morgan as a disciple, gives him the good word (literally a book and figuratively a philosophy), and dies for him and his sins (the murder of that boy), and after his death continues to impart wisdom. I mean, there’s a sacrificial goat for fuck’s sake.

If you want to give him a walking god, why can’t He be made in his image?

1. I don’t need to be convinced of Morgan’s humanity.

Remember when we spent all that time getting to know the poor beleaguered Governor. We saw him after Woodbury trying to make a life. We watched him attempt to love (or pretend to love as sociopaths do). We weren’t exactly supposed to swoon over him, but he was made more human by his love-for-his-daughter-Penny-by-proxy relationship with Meghan. He started to pair-bond (because I can’t believe he loved) with Lilly. He was kind of a person – a fucked up person, but a person nonetheless.

Is that what is happening here? Are we being convinced of Morgan’s humanity? Is this meant to explain Morgan’s descent into darkness and his eventual return to the light?

Not because I don’t care about Morgan. Despite my annoyance with his character’s (in)actions in Alexandria. I see him.

Maybe this is because his descent makes sense to me. Loss makes sense to me. I think part of being black in America is being acutely aware of and at constant risk of loss. Because black death is so prevalent, because black lives are deemed so disposable. We see what loss does to those who survive. Constantly.

Morgan lost his wife.
Then his son.
Then his mind.

So I understand why my dude was clearing anything that got near him: he was constantly in danger and had to protect himself.

I understand, too, why he doesn’t want to kill anymore and I didn’t need “90 Minutes with a White Savior” to teach me that. I can turn on any news source and see sons and daughters and  mothers and fathers are snatched from families, from communities, from cars. Those who are left behind do what it takes to survive. Sometimes it’s an angry survival. Sometimes it’s peaceful protest. Sometimes it’s one in the morning and another in the afternoon.

Morgan didn’t need an explanation for his grief or anger and I doubt he needed a white hand to lead him out if it.

I surely didn’t need or want to see that.

But what worries me most is the viewers who aren’t like me – not worried about their brothers, or mom, or themselves – and who watch this and have their narrative about me, about us, reinforced. I don’t need saving. I need a universe where people, my people, aren’t being killed left and right. Then the debate over force versus pacifism, over which is justified and who decides, will be moot. If we can just live without having to make the case for our humanity, then everything is better, for everyone..

Watching The Walking Dead? You can read our recaps and commentary on the episodes here. And follow our Twitter for all your live-tweeting needs.