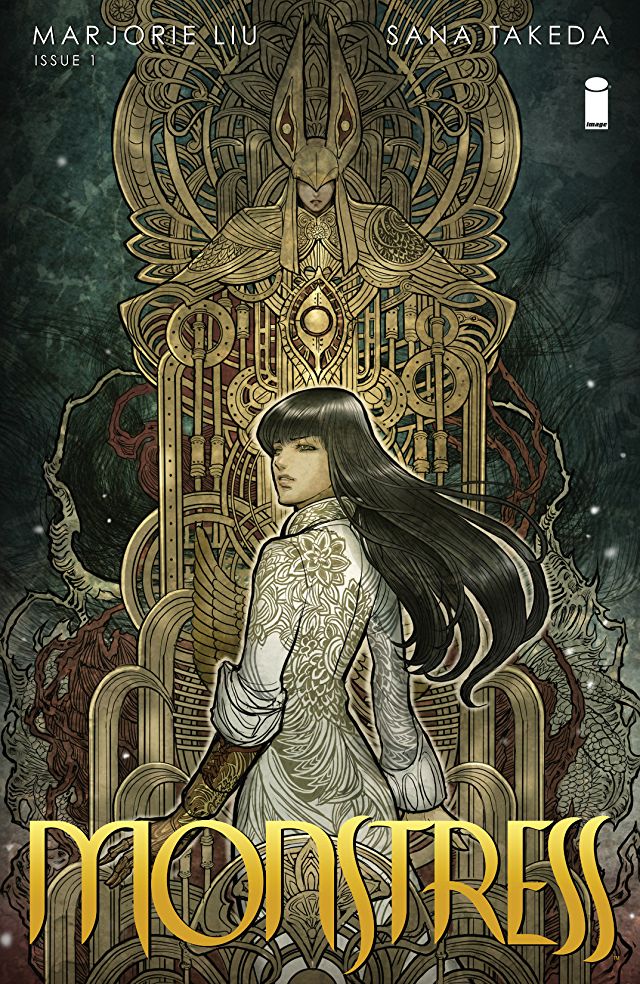 No Major Spoilers Ahead. But some very slight ones as this is a Advanced Review.

But in all seriousness, I’ve been so hyped for this book ever since I first saw Image Comics drop a tweet about it some time ago. Why? I just may be a Marjorie Liu stan because she’s credited in writing some of my favorite mutants who also just happen to be children of Wolverine. Yes. X-23 aka Laura Kinney (Christ, I know she’s basically a clone, let’s focus here) and Daken, (Akihiro) aka the Dark Wolverine (otherwise known as “The Emo Wolverine” as fellow BNP member Oz calls him). She’s written and co-wrote some great material for Marvel so I know she’s legit. Also, is it true that her origin story / break into writing comics was…writing X-Men fanficton?!

So I know Marjorie Liu. I also know of Sana Takeda. I’m less familiar with her work outside of Marvel’s X-23 series which Liu also worked on and Ms. Marvel (Carol D before the haircut and the costume change, folks). But I know Takeda’s artwork to be on point. Her comic book covers are eye catching and deliberate. It’s unique enough that I could pick her art style out of a lineup. It’s dreamy. It’s vivid. It’s perfect for this new story that Liu has penned and I’m here for it. I wondered what Liu and Takeda would present us with, both being artists who are not only women but Asian women at that (Liu is Chinese-American, Takeda is Japanese). As artists of two marginalized groups operating in an industry where they don’t see too much of themselves in either category, I wondered what this first issue would bring. I wondered. And waited. And finally got my chance to see. Introduction done. Here’s the review of MONSTRESS #1:

This is the not only the first page of the book but also first visual that we see of our main character. She is a woman. She is tattooed, possibly branded or marked in some fashion. She is an amputee, missing an arm below where her elbow would be. One could assume that she’s disabled. Weaker. She is chained, a collar attached to a chain which reaches off page somewhere. Not a good sign.

She is naked, where one would assume that she’s vulnerable. One could assume that this leaves her in a position at the mercy of others especially because of her sex. First page in, I am immediately uncomfortable and very worried for our female protagonist. I am internally cringing. I am holding my breathe unknowingly. Then I look back up to see the expression on her face. It’s a blank slate. All but for those eyes.

Those blazing eyes that are narrowly looking out. Almost bored? Defiant. Then I take notice of the entire image again: her posture is straight?  She doesn’t cower or try to cover up for modesty’s sake? She stands tall. Well, as tall as she can with what looks like a whip at her chin probably in an attempt to make her face up and forward for whatever crowd that’s gathered to bid gold on her and what ever unfortunate souls that happen to also be in chains.

Who is she and just what I am reading?!

That’s Maika and this is a strange and terrifying world where I’m guessing retribution is sought. I have a feeling dark forces are at play and before the curtain drops I figure there is going to be a lot of death for sure. Described from the synopsis Image Comics provided for us, this is a fantasy world that’s “Steampunk meets Kaiju”. Soooooo either it was the best of times or the worst. Only time will tell.

As I kept reading I saw that this was a world where the helpless are preyed upon and cruelty is abound.  I saw wealth. I saw a slave system in place. I saw power being wielded by important people, so far women. I saw opulence. I saw a survivor of some horrid past in the body of a young woman with eyes as sharp as glass. The world  has done wrong by Maika but she’s stepping forward to try to right some of it but at what costs?

We stress representation of women in all forms of media, especially more of the positive representation when it comes to comics. Are there women present? What kind of women? How are they written? Have they been “fridged“? How are they posed? Will you ever forget this? These are all thoughts of mine whenever I pick up new reads, particularly comics.

With Monstress, three major things stood out to me when reading this epic:

Maika: “Strong Female Character”? Nah. Try Again. While it is so easy to seek out cool female characters in the media we consume,  it’s even easier for writers, especially male writers to give us the girl who falls into the old “Strong Female Character” trope. You know the gal who kicks ass, takes names and look great doing it….and ends up being resigned to a love interest and/or kicking much less ass later on. Granted we’re still one issue in and I predict that Maika isn’t headed down that road. I also can’t say for certain if Maika has (complete) agency of her body but I can cosign that she’s being fleshed out, which I appreciate. She has moments of rage in addition to vulnerability. There’s more to her than what she’s presenting and I do want to find out.

Women are present here in this story. After I finished reading, I wanted to count to see if there were more women than men in a speaking role throughout the panels. And while I did see male and female slaves, guess who I saw more in command? More empowered? Women. Yeah, you read that right. There’s a BIG role reversal here which surprised me greatly and got the wheels in my head turning. Don’t get too happy though: this is a very bleak and grotesque place so far and I wouldn’t want to have tea with most of these ladies so far.

How Much is Too Much? The Price of Being Vindicated?  The writer’s notes at the end of this issue give us insight on what searing imagery inspired what later became this collab between Liu and Takeda: the theme of survival. The survivor who outruns the monstrous circumstances or forces that almost took her life while she dodged all the hateful words that made her out to be worse that what she was…but what if she became the monster? What if the hero of our story is subject to “turn to the dark side” or already has? What do we make of that? How will we view this character? 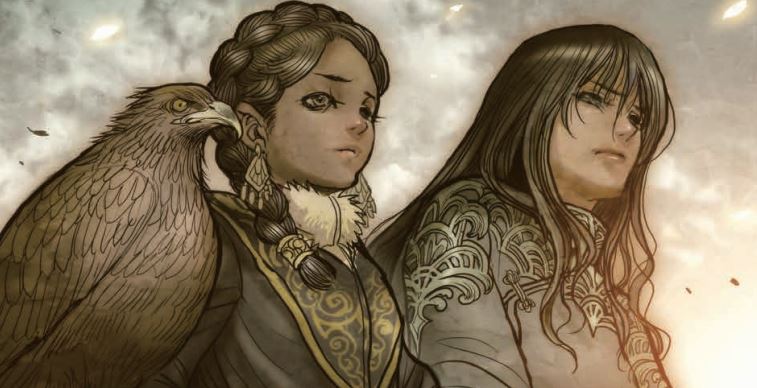 Other than slavery being what looks like totally legal in this world, there’s also some hints of lots of not so great happenings, like genocide and the obvious discrimination. There is severe mistreatment of other races of beings, as there are humans and non human races present. Be warned that this comic is for mature readers! Issue #1 gave us over 60 pages of dazzling, bloody introduction to Maika’s world and a terrifying glimpse of the deep, dark being that haunts her.