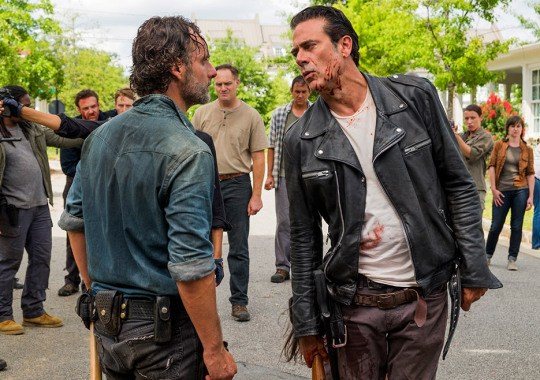 We haven’t gotten a single story all season. Instead we got pieces of several stories. That meant that the 90 minute mid-season finale had so much work to do to try to pull it all together in a way that made sense and was gratifying (read: made me hate myself less for watching all those episodes). Because of that, it was a dense episode with each character in the ensemble picking up their storyline and running with it.

ca
Over at Hilltop, Maggie is 1/8 mourning Glen and 7/8 lowkey running Gregory for all of his shit including the literal food he was about to put in his mouth. Maggie is pregnant and killed more zombies than Greg’s cowardly ass? Maaaaan, listen, Sasha and ‘em getting treated like they just put it on the entire town. Dudes just out here baking entire pies for them. And Gregory? Welp, he don’t like it but Maggie is killing him with the feigned kindness while counting up everyting he owns that is about to be hers. Meanwhile, Negan’s freshly shaven ass (why did no one slit his throat when he was literally holding the murder weapon up to the most vulnerable part of his body? If this was CLUE, they’d need to be like “It was Nicole in that fancy ass bathroom with his own straight razor) is all up in Rick’s house eating his food, dirtying up his dishes, sexually harassing his babysitter, and using his son as a prop in a really creepy roleplaying suburban dad fantasy.

[divider type=”space_thin”]
Rick and Aaron are standing on the edge of a lake looking at a paddle boat with literally dozens of bullet holes like “we can make this work.” What? Fam, no. No. No. No. Can’t you see the metaphor you’re about to get into? This is a sinking boat. This is a lake filled with Walkers. You’re paddling with broken bits of a Do Not Enter sign. Nothing about this is a good idea. Not one thing. Especially not the Jason Vorhees-type creeper (who I’m calling Boots from now on) in the bushes watching them.

Rick and Aaron manage to paddle to the middle of the lake in their bullet-riddled canoe powered only my hopes, dreams, and fear of Negan. They find a bunch of supplies – and a note saying that they still lose – and bring it back to Alexandria still unaware that Boots is following them. Aaron manages to deliver the most soul crushing “pep talk” I’ve ever heard; let me summarize it for you: we are still breathing so even though our lives are shit and we’re actively failing everyone we claim to love, there’s that.

While they’re on their way back, Spencer is out in these street Spencering. So about Spencer who has been a selfish and spoiled brat since Rick et al met him. This dude found a walker and the walker’s stash of goodies while Eugene was out making Rosita a bullet. He comes back to Alexandria with his haul and a huge shit-eating grin on his face. He has a plan: be a good serf, gift Negan some liquor and generally kiss his ass, and then ask, ever so politely for Negan to off Rick and put him, the Original Mr. Softee, in charge of Alexandria. He even gets dressed up, puts on his best polo shirt and khakis like this is an interview for an internship. So what does Negan do?

It turns out that Negan don’t like that kind of shit one bit.

[divider type=”space_thin”]
And this is where things take a turn for the oddly absurd. Rosita decided that this is her moment and she shoots Negan. Which is to say that she shoots at Negan, but misses and hits Lucille instead. I- I just- I’m not sure- I can’t- … sure. Sure that’s what happened. And Negan, because he has a code, doesn’t beat her to death with Lucille. Instead, he has his henchwoman Arat threaten her pretty face with a knife in order to find out who made the bullet. Yes, in addition to being a maniacal one-note villain, it turns out that Negan took some CSI course at the local learning annex and knew immediately that it was a homemade bullet and that it was made by someone in Alexandria.

Rosita being Rosita said she did it. Of course. So Negan tells Arat to cut her face because, y’know, her face is her most prized possession because she’s pretty. Rosita being Rosita leans up into the knife and says again, “I made it.” I am not mad at you, Rosita. You need to be Rick’s new life coach.

Minor tangent that me and Will Evans went on while discussing this episode: Rosita’s face is going to be fine because 1) Arat barely cut it despite being ordered to and 2) because TWD has an aversion to disfigured women. The audience’s gaze can take in Dwight’s face. Hell, we can even watch while a man endures the same hot iron that Dwight endured; we know it’s ungodly painful because he pisses himself. We can look without flinching at Carl gaping cavern of an eye socket. Speaking of eye sockets, add the good Governor to that list. We can watch Glenn’s eye burst from its socket. BUT. We aren’t really asked to look at those kinds of injuries on women. Their deaths, while gruesome, are generally brief; the scars aren’t a weekly reminder. Now, I’m not campaigning for Rosita to play the part of Simba’s uncle or anything, but let’s not forget whose gaze we are watching this show through. Hint: the same old gaze.

So Negan authorizes Arat to shoot someone, anyone. Goodbye, Olivia.

Then we get that Spartacus moment when Tara says it was her, but Eugene finally stands up and comes clean. So now he lives at the Savior compound obviously as Negan new pet bullet- maker.

We cut over to the suburbs on the outskirts of the Kingdom, population: Carol’s curmudegeonly ass. She’s still semi-retired, but Morgan is checking up on her. Evidently, Ezekiel been checking up on her, too. [eyebrow raise]. Morgan and her are in mid-convo when Richard AKA dude who just don’t know, shows up and wants to talk that rebellion talk. He knows the Saviors ain’t shit and he wants Carol and Morgan to help convince Ezekiel to fight.

Carol is committed to retirement though. Like this ain’t her fight. Which brings me to this: Nan one of them, Carol or Morgan, not even remotely curious about what’s going on in Alexandria? Carol is having a mid-apocalypse crisis so her I get… a little. But Morgan? Has he abandoned all the Alexandrians? Not even a little curious about what their friends are doing? So neither of them know that Negan came for and collected Abraham and Glenn. Because that knowledge might have Carol putting her old uniform back on.

Dude is so disgusted with them that he leaves (and goes to his secret RV hideout to cry it out). I am too. First, fight. Second, no, for real, fight. Negan wants everything. Carol and Morgan are a part of everything. Carol was almost killed by the saviors. More than once. She knows that they are all Negan.

But, and if I’m honest, this is the more pressing thing for me because I never thought I’d say it: I’m bored with Carol. It’s been 6 seasons and we saw her change from mousy and frightened victim of domestic violence to the most badass killer version of a mother hen to… this: default pacifist playing ostrich with her head in the ground. It’s boring. Especially because her old role as fighter is being filled admirably by Michonne, Sasha, and Maggie (and, to some extent, Carl).

Can we please give this woman a love interest? Everyone on the show has had some sort of love interest/flirtation. Can we finally get that hot Carol/Daryl action that the writers stopped hinting at seasons ago? Or can we get that pomegranate and chill confirmation? Hell, I’m greedy, can we get both? Speaking of Daryl, he’s out of his cell again and wandering around the Savior complex eating peanut butter and stealing clothes. This is the most leisurely prison break I’ve ever seen. Until it isn’t. Daryl finally gets outside, spots his motorcycle, and is confronted by Fat Joey who he promptly overkills with a metal pipe.

Enter Jesus who has been roaming around the Savior compound since right after Carl tricked him into jumping out of a moving car last episode. They ride off into the sunset together (I could ship these two as well; I’m not picky). The goddess Michonne is elsewhere. She took a page from Negan’s own playbook, created a wall of Walker bodies and when the Savior scout stopped to investigate, put a gun to her head and demanded to be taken to see where Negan was.

This was perhaps my favorite scene of the entire episode, maybe of the season. The woman takes her to a spot where Michonne can see the massiveness of the Saviors’s camp (now she knows location and approximate size of the opposing force) and then tells her that she has choices. These choices include killing her with the silencer in the dash, burning and burying the car. This is so dense. That woman is Negan. If Michonne lets her go, she will report back and there will be consequences for the Alexandrians. What is your life though if you suggest to a stranger that she kill you? There is so much here about what is to be a Negan, to be a Savior, to be beholden.

Needless to say, Michonne shows back up to Alexandria alone. And delivers what has to be installment 56 of the Michonne gives Rick a Pep Talk speaking tour. This time is works, though.

So now Rick is on his Avengers Assemble shit and they head to the Hilltop to see Maggie and Sasha. But guess who shows up just in time for the reunion? Daryl and Jesus. This is how we arrive at my second favorite scene of the episode: Daryl and Rick embracing.

While I have my issues with the gaze in this show, I am in no way mad at the physically affectionate brotherhood between these two. From the way Rick looked at an enslaved Daryl when the Saviors showed up at Alexandria days early that to this moment, I’m here for a male/male relationship that normalizes verbal and physical closeness. These are two killers. These are two friends. There are two men who love each other unapologetically.

So now the gang is all here (except the Oceansiders, who Tara still hasn’t mentioned) and are about to be introduced to King Ezekiel. I guess it’s time for war.