I have this friend, let’s call him Audible Sigh, because that’s the sound I make whenever he begins recounting the latest variation of a mistake he’s been making for as long as I’ve known him. Audible Sigh is also the sound I make at myself when I realize that I’m going down this same road with him again, knowing that I know better and doing it anyway.


[divider type=”space_thin”]
On Sunday, when I was watching the season premier of The Walking Dead, I couldn’t get Audible Sigh out of my head because I looked around and realized that I might as well have been listening to variation 23,879 of Audible Sigh’s cyclical trek. Here we go again, TWD, both of us making the same mistake over and over.

So spoiler alert (in case this visit to BNP is the first internet foray you’ve had since Sunday), we got the big who-did-Negan-bash-to-death-with-Lucille reveal. And it wasn’t surprising. Not even Reveal: The Sequel.

For the past few seasons, the showrunners have avoided killing off any of the core group by introducing a character, giving them a backstory (thereby elevating their prominence in the narrative), and then killing them. It’s cheap. It’s a loophole. Remember Jessie (and her whole family)? Remember Denise?
Remember king of the Wolves that a few too many lines to survive more than a short arc? Hell, remember Eastman? Remember Bob? Remember Noah? If we’re being real, remember Tyrese? Remember Beth during that season she did more than drop mixtape after mixtape?

[Audible sigh] You get the idea.

And yes, death is inevitable in the walker world. I’m not debating that. I’m just pointing out that the core group has been perilously and curiously death-adjacent without getting any of it on them. They the only clean muhfuckers at the mudslinging show.

That makes sense given that TWD isn’t art for art’s sake; it’s a commercial product with a target audience who makes shit like this at work instead of working. So yeah, they have a vested interest in keeping their consumers happy. But it has to be more than that, right? I like zombies. I know how it goes. People die. Even people I love. Especially people I love. So why deviate from that? I’m not saying pick the core group off one by one like they last name is Stark or anything, but it’s only logical that every so often we’re going to lose one of them to the business end of a walker.

Because it’s easier than introducing new characters and making us care about them in a meaningful way. We have so much history with Carol, Daryl, and Glenn that the hard work of character development is done – has been done for a minute now. It’s not that they’re static exactly but they are fully developed; now, they evolve and are impacted by their world which is different. The writers can trust in the goodwill we have for them and the thorough understanding we have of them allows us to see them and their actions as truly human.

It makes sense that Carol is a killing machine because of her victimization in an abusive relationship and the loss of her daughter. So we can watch her be pretend to be a Stepford wife knock off in Alexandria and, instead of backing slowly away from the television mumbling about sociopaths, we accept that she’s doing it to protect the group without question.

Daryl’s older brother was a horrible person, a racist, and most of all a shitty brother. His father wasn’t loving; he grew up at a level of poverty that most people can’t understand and had to fend for himself. His distrust (and refusal to shower) in Alexandria is quirky but not unreasonable. His fierce loyalty to Rick and the many directions it pulls him in perfectly in line with that.

Building that level of depth for new characters who may only be on the show/with the group for a few seasons is difficult work. But so what? That’s the job you signed up for, writers and showrunners. Make me care about a character. Make the characters multidimensional and flawed and human and then kill them because that is how life is. We don’t only lose the people we barely care about. We lose the people with whom we have a deep and textured past. 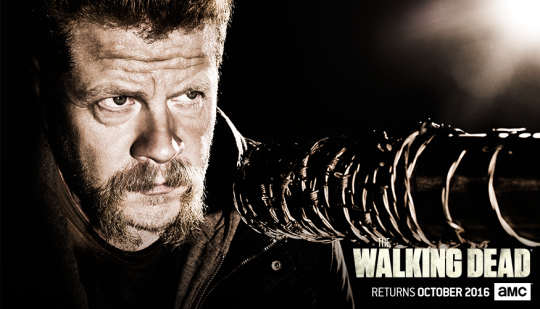 So color me completely unsurprised when Abraham met Lucille. He was important enough to be considered worthy of the build up, but still wasn’t really anybody’s favorite (and now Sasha is free to find someone less GI Joe meets Foghorn Leghorn, but I digress). He died with dignity, saying “Suck my nuts” like all distinguished heroes throughout history.

His death was another chance for emotional manipulation by the writers. But I can’t even bring myself to be mad about it. I think back to Tyrese who was bitten, had his arm chopped off (like Herschel had his leg choppedoff), and still didn’t make it (weird how Herschel did, huh?) though we, as the audience, were left in the lurch for quite a while waiting for the outcome of will-he-or-won’t-he-turn question. Abraham dies and all around the country, the fandom put down the aforementioned rioting apparatus. But hark! What is that on the horizon? A second death to throw you off just when you thought you could relax?

Of course it is.

We’ll sidestep the fact that’s it’s essentially tragedyporn to kill Glenn while his pregnant (ectopic?) wife watches and skip straight to a story about a teacher I once had. He had two heart attacks that I know of before the one that killed him. It’s not that I wasn’t sad when he died, it’s that I was prepared. So when you “kill” Glenn off for play-play just to have him pop up unharmed a few episodes later, you already got whatever emotion I had in me for the character.


[divider type=”space_thin”]
It was like being at a play when I’ve already sat through a dress rehearsal. I’m checking my watch as I mumble “Oh, it’s so sad. So where do you want to eat after?” For the record, I will miss Steven Yeun as an actor (and as one half of a fictional interracial couple not built on exocticism).

Back to the tragedyporn aspect, Glen’s death will likely elevate Maggie’s storyline [Audible sigh]. She’s pregnant, sick, newly-widowed, and white. Of course he was going to die, it makes her more interesting, I guess. [Audible sigh]

I wanted to be excited or sad (or [insert any strong emotion here]), but mostly I’m meh. The acting was great all around; Andrew Lincoln in particular was great. But besides that, the two characters highest in everyone’s deadpool died, Negan continued to be a one-dimensional big bad, and nothing surprised me.


[divider type=”space_thin”]
So I should probably stop watching. [Audible sigh]

The thing is, I’m invested. No, that’s not right. I just know that I can’t get those past 6 seasons back, so why not keep going? I know I’m going to watch at least the next episode. [Audible sigh]

And I’ll keep saying that to myself every week until the season ends. And every week I won’t be surprised if I’m disappointed. The thing is that I know there are other shows out there that are good and exciting and exactly what I say I want, but for some reason I’m watching this one, hoping that it either returns to the glory days of my memory or becomes something new that I can be excited about again. But what are the chances that happens? [Audible sigh]

Watching The Walking Dead? You can read our recaps and commentary on the episodes here. And follow our Twitter for all your live-tweeting needs