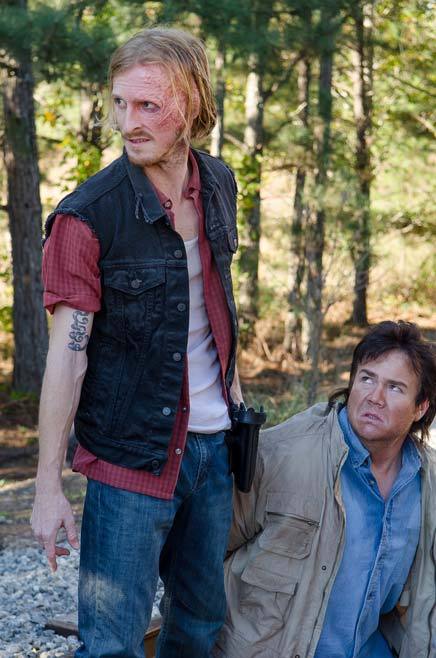 We can’t talk about this season without treating time (and to some extent music) as a distinct character. This episode was the first time since the beginning of the season that the movement of time felt really necessary instead of a cheap device.

The introduction of monotony into Alexandria is done well with the repetition of the morning routine: Olivia checks the pantry; Father Garbiel walks by casually toting a gun; Eugene assumes the gatekeeper post while Sasha looks on from atop the wall; Morgan practices… with his stick; Carol smokes a cigarette. This is Norman Rockwell adapted to the time.

We get to see how routine life has become and, for a group that has not known routine since the prison, this is important. They are settling into life here. They are making the home and life that Deanna had hoped for.

So, at the end of the episode, with the death and the abandonment (more on that in a sec), the fact that the routine is largely unbroken (Olivia, Gabriel, Morgan, and Sasha’s role remain unchanged; Rosita plays the part of Eugene, but assumedly only until he is well again) is important because it betrays not just routine, but complacency.

Speaking of complacency: Rosita. Let’s start with a disclaimer: I have no slutshaming in my heart.

I’m not mad at her for having a bed-warmer, even if it is a boring and cowardly one. My question is a philosophical one, not a moral one: why? It seems like between the Abraham breakup scene and the Denise monologue (more on that in a sec), we’re to believe that Rosita can’t or won’t be alone. Because, f’real, Abraham was not a prize: Remember that time he beat a man to death in a grocery store and his family took their chances out in the walker-infested world rather than stay with him because that’s how scary he was?

And perhaps, then, Rosita and Abraham are perfect for each other: they both cuffed up right quick, in part, because as Abraham said he thought Rosita was the last woman alive and he thought that his life would end sooner rather than later. Once he realized that “ things are gonna go on for a while” he decided to pursue Sasha.

But what we don’t know is why Rosita was with Abraham and/or why she’s now dealing Spencer? We can guess sex; it’s a valid reason, but then why agree to dinner when she obviously is bored by the idea.

Granted, I’m skeptical of how women and Black people are treated on the show, so I’m just cringing to think of where this storyline might go. Speaking of my generally skepticism about TWD’s treatment of women and Black people, let’s talk about one of the two Black women who have survived:

Sasha: Um. So… Abraham, huh? Why is that exactly? So our esteemed EIC, William Evans, said it best when he said that maybe Sasha is considering Abraham as a… suitor(?) because he’s the only one giving her any attention. But, why is that? Also, when is that? When besides the weird office building dress up game have Abraham and Sasha meaningfully interacted onscreen in a way that would imply a mutual attraction? I’m not counting his clumsy (and a bit threatening given his timing) come on of “I’d like to get to know you a lot better.” We know it’s building because he bails on Rosita and in doing so implies that he’s found another/better woman, but how are we getting from clumsy come on to “come on in”?

[quote_left]I’m not mad at her [Rosita] for having a bed-warmer, even if it is a boring and cowardly one. My question is a philosophical one, not a moral one: why?[/quote_left][sigh] Sasha, why? Is this just just loneliness? Do you miss your brother and your boyfriend so much that you’ll settle with this dude who talks like he swallowed a farmer’s almanac and washed it down with a pocket treasury of pithy sayings? Because even in Alexandria, you can do better. Fuck, you can stay alone and be better. (And there is even less onscreen chemistry between these two than when Leia’s brother kissed her).

Are you just acting out because the writers gave the story arc that was obviously intended for you to Carol? I see you, Sasha. I see the character-building and the subtle, but consistent emotional untethering that would have made you wondering out into the woods alone because the weight of the pointlessness and impending death was just too much to bear. (Another reason why her starting a relationship, which in some ways is a sign of hope for the future, makes no sense.)

Which brings us to my favorite cardigan-wearing, machete-toting, cookie-baking, setting people on fire emotionally conflicted survivor.

The thing that stuck with me the most this week is how Carol seems to be the walking embodiment of an anti-feminist manifesto. It’s like an MRA troll created her in his basement while wearing underwear on his head.

Why, you ask? Because the choice she presents at the end of the episode is the definition of a false dichotomy. She can either stay (=kill) or go ( =not kill). In what world is this remotely true because it’s definitely not true in the Grimes universe? (Short rant: this is like the eternal you can either be a working mom or a SAHM ultimatum as if these things are not both the same juggling act.)

Exhibit A: Olivia. Olivia has never left the compound. Olivia will never leave the compound unless forced to. Olivia isn’t killing and no one is interpreting that as a sign of weakness.

Exhibit B: Rick. While yes, he’s a killing machine that probably smells like Old Spice and gun oil, he wasn’t always. Remember that when he was at the prison, he was working hard on that certificate of horticulture while actively not wearing his gun… ever.

Exhibit C: Maggie. Her last words in the previous episode were “I can’t do this anymore.” And I think “this” means kill (or have Carol do my killing and therefore bear the emotional trauma associated with it.) She can stay and not kill, like Olivia. Like Deanna. Like Eugene in every episode except the most recent.

Further, what kind of hippie commune does she think exists beyond those walls? Killing so the group can survive or killing so you can survive both involve [drumroll] killing. So the question is: is Carol suicidal? Is death by breather on her agenda?

The idea that Carol can’t change, that she must remain a killer capable of terrifying things, is a standard other characters haven’t been held to. Which is to say, we all need a vacation from our jobs from time to time. This applies to killers as much as to accountants. And we see attempts at change in this episode. First, Eugene. This dude outlines exactly why and how he’s changing. Granted, he’s a bit overconfident, but he is, in fact, adapting to his environment. He comes with a plan for Alexandria to be a leader in both arms and the new economy. He stands up to Abraham. And he bites a dude’s dick and effectively saves his group. (He got the group to spread out by suggesting the Abraham was hiding. Between that and the aforementioned dick-bite, his group was able to fight of the Saviors.) Someone less successful at changing is Denise. I feel like any discussion about her has to come with at least two disclaimers:

1) She told Tara that she’d tell her she loved her when she got back soooo… we knew that at least one of them wasn’t going to live to see that reunion.

2) They treated her like a Black man this episode: as soon as we got backstory (oh you had a twin brother? Word. Oh you can drive a stick? Word. Oh your parents had a drinking problem? Word.) we get a death.

But to clarify, Denise’s change was self-important and entitled. She was bored inside the walls and wanted to prove herself before she put in the work that would have allowed her to do that.

[divider type=”space_thin”]
This is the difference between her and Eugene. He has “leveled up” and is acting accordingly. Denise is waxing philosophically about the importance of leveling up. And, welp, one of them is still living.

BUT. It seems like this is a pattern. Rick and Carol both have horrible experiences in losing someone they love traumatically. Both feel the need to kill to protect, then to stop killing, but only Rick is able to successfully compartmentalize (or interrogate or juggle) the need to live with the need to kill. Rosita and Abraham partner up in order to stay alive and pass the time, but Abraham is able to move on (abruptly) and find a desirable partner; Rosita isn’t. It seems like that we see male and female characters facing similar challenges, both physical and emotional, and only the men are able to successfully navigate them. Meh.

[quote_right] It seems like that we see male and female characters facing similar challenges, both physical and emotional, and only the men are able to successfully navigate them. Meh.[/quote_right]On the opposite end of the spectrum in camp #NeverChange is Morgan. Dammmmmn. Why you make me agree with Morgan, writers? You know that shit is against my religion, but the jail – one made out of jail making materials – is a good idea and it does give Rick options.

All of this, the characters and their struggles, didn’t impact me as much as the setting did. In particular, Edison’s Apothecary Shop.

When Rosita, Daryl, and Denise first roll up to the shop, I was struck by the handprints on the windows. Not that they were there, but that they were nowhere else. Even before the group went inside, we knew that there had to be something in there: a walker or a breather.

When Denise wanders off (seriously Daryl and Rosita, she’s the doctor; try to keep her alive) into a back room, she finds: and a small foot sticking out of a large cooler.

(Nope, no picture as it is burned into my brain.)

More importantly, the word “hush” is written on the walls over and over again. Since the door was still locked when the group got there, we know what happened. We know how horrible it was. We also have seen this before. Morgan disconnected from reality when he couldn’t protect his son, so this idea, parental failure in a perilous world, is a familiar one. That it precedes Denise’s death while she is with not one, but two protectors is relevant. Notably her two protectors are a hypermasculine guy and a hyperfeminine woman and they argue over directions on the way to the store. And Denise sits in the middle as they drive. And she waits in the car while they inspect the road.

Denise’s death is Daryl and Rosita’s failure, but it is not similar to the failure inside the apothecary. There, a parent made an unthinkable choice. Since, Judith still exists and Maggie is pregnant, this might be foreshadowing. What exactly are we willing to do to save the group? What exactly will a parent do to save themselves and what will it cost them?

And in some ways, that scene felt almost like an homage to this which is also burned into my brain.