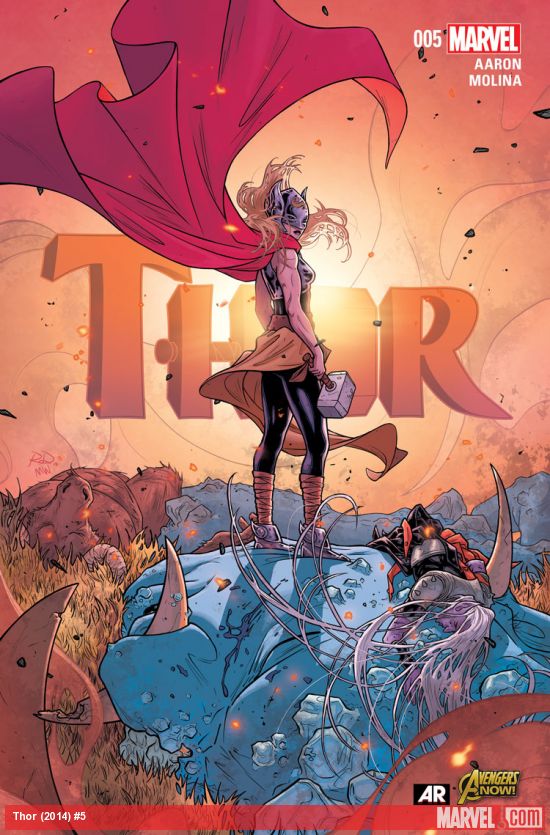 Jason Aaron is going the distance in establishing the Goddess of Thunder in the status quo. So far, he’s shown us that our new Lady Thor is very much unlike (and sometimes, like) the Odinson we’ve come to know and love. He’s shown us that she’s every bit as formidable as her male counterpart. Now, we get to see a bit of how she shakes things up in Asgard as well her protectorate, Midgard.

In this issue, Thor is getting down to the business of fighting evil on Earth. This doesn’t take up much of the book, but the bad guys’ reactions to this brand new thunder goddess are pretty entertaining. Meanwhile, on Asgard, news of this change in the paradigm has finally reached the All-Father Odin and he is not liking the things life is showing him. He’s so pissed, he’s reached out to some radical sources to help rectify the situation. The individual plot points are pretty entertaining, but the real main course for this issue (and the book as a whole as time goes on) is the theme of change upsetting the patriarchy.

In many ways, Marvel is quickly easing into the market’s increasingly overt shift towards more female-centric (not to mention characters of color) comics. And there is simply no better way to welcome this rapidly growing demographic of readers than to deliver such drastic changes to a character who is, historically, the totem for Strong Male Whiteness. So, a story arc about the father of Strong Male Whiteness not responding well to a strong female lead makes a lot of sense. Russell Dauterman takes the month off and lets Jorge Molina man the helm on artwork and it’s a nice change. His more fluid style and darker color palette actually ended up being fun to look at. And his action beats were not quite as detailed but kept some of Dauterman’s sense of whimsy around.

Bottom Line: This book is already the stuff of legend for so many reasons, but turning a Thor comic into feminist narrative is going above and beyond the call of duty. 9 out of 10