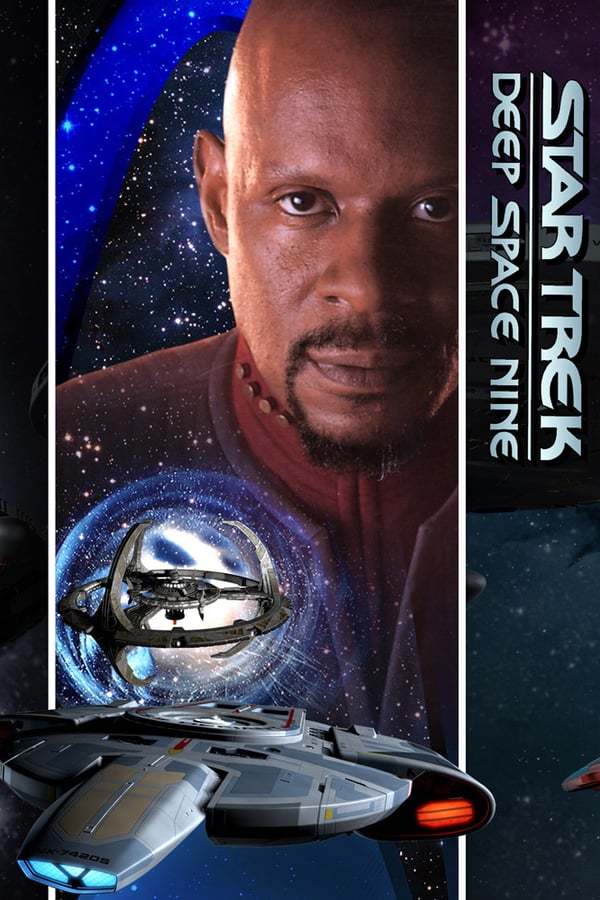 Although immediately divisive among fans and critics, over the course of its seven seasons, Star Trek: Deep Space Nine stands as the most tightly written and conceived Star Trek series.  Whereas previous installments, the original series and The Next Generation belonged to the generations of my parents and grandparents, DS9 was the first series that felt like mine. Back in the VHS timer and recorder days, the only time I could catch DS9 was 9am on Sundays when it was syndicated. In many ways, DS9 was my church from the years 1993 – 1999. Thus, this edition of “Top 5 Dead or Alive” brings you my take on the minister, the prophet, the New Orleans Nubian himself – Captain Benjamin Lafayette Sisko.

One of the strangest characterizations in Star Trek is how the French Jean-Luc Picard is blatantly British in both manner and dialect. (Ed note: It is explained in Season 1, Ep 4 of Next Generation, “Code of Honor”, but doesn’t come up much.) While William Shatner was born to an Orthodox Jewish family, the character background and details of James Kirk were generically Anglified. Ben Sisko, in contrast to the other captains, leaned into his New Orleans roots. His father owned a famous restaurant, and Ben himself often retreated to peel potatoes and shrimp by hand when he needed time to collect himself.  Sisko kept N’awlins in his veins and would never be caught dead eating replicator-produced gumbo.

Captain Sisko, without any fanfare whatsoever, represents the most inclusive and empathic of all the Star Trek series leaders to date. Whereas Captain Kirk was lauded for breaking television with the first interracial kiss, the man was a shameless ethno-fetishist and colonial skirt-chaser. Socially and visually, he upheld the propaganda fantasy image of the benevolent explorer whose good looks and talent make women fall in love with him in spite of his arrogance.  The arrow of time changes many things. In the ’60s, Kirk kisses a black, brown, green, or blue woman and television is never the same. In the ’90s, Captain Sisko quietly leads the most diverse, dynamic cast of characters in the Star Trek pantheon until the release of Discovery.

Sisko did not have to embrace the universe’s collection of women to show his empathy and understanding. Instead, he led by example and through actual inclusion.  Whereas Discovery tallies its diversity checklist with obvious winks to the camera, DS9 did so in a seamless, fluid manner of character building. Sisko’s crew includes Quark, the Ferengi running the bar; the shapeshifter Odo as the head of security; Kira Nerys, a Bajoran freedom fighter as the station’s commander; (eventually) Warf as the local Klingon; Miles O’Brien, an Irish head engineer with a Japanese wife, Keiko Ishikawa; and his best friend Jadzia Dax, who is actually two lifeforms, a symbiote (Dax) and a host (Jadzia). Later in the series, Sisko even takes in one of his former enemies, the exiled Cardassian spy, Garak.  Although Garak plays a sometimes dubious role in the series, in the end he makes a great sacrifice during the final battle with the Dominion. Sisko judged everyone by their potential, and not by their past deeds. 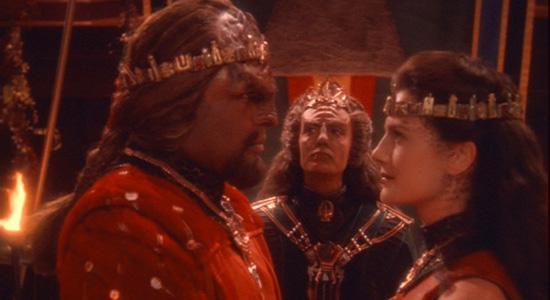 “I see the ceiling.
And adjust to such a feeling.
I be the prophet”

As the Star Trek canon expanded from serialized 60’s camp to 80’s Reaganomics, Deep Space Nine existed as a brooding middle child to Next Generation and Voyager. With that freedom, however, the series explored politics and spirituality in a maturity uncommon to television of the time. Captain Sisko, already burdened by the duties of being a single father and oft-contested leader of a space station at the forefront of a war, found himself becoming something much more than a Starfleet officer. Chosen by the Bajoran deities themselves, he became The Emissary – the link between the spirit world and corporeal world.  Going beyond the call of duty to both his station and calling, he ultimately left behind both his crew and family in order to dive headlong into his responsibilities. He promised to return, however, and with the powers of the Bajoran gods, that moment could be merely days or months from when he departed, but a lifetime may pass for Sisko doing that divine work in the æther. 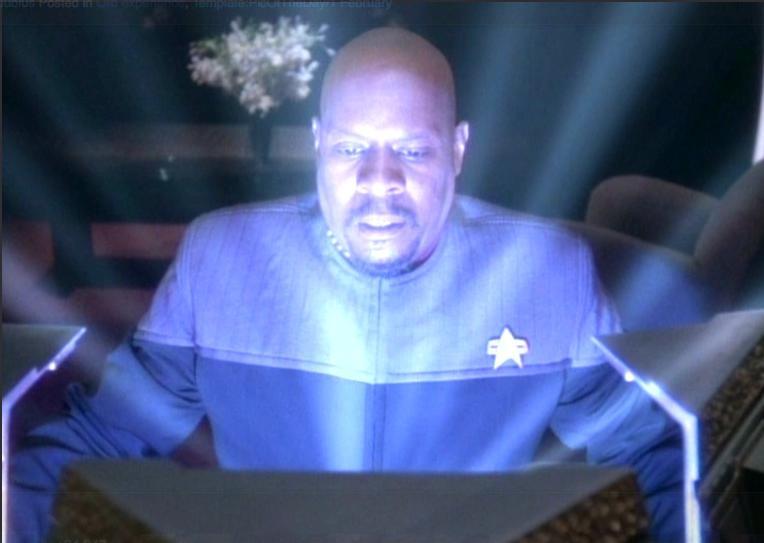 “Son, if the sun don’t shine
I’ll try like hell
To make light from the dark for you.”

The most powerful and unexpected legacy of Captain Sisko and DS9 as a whole is its representation of Black masculinity and fatherhood.  Whereas many a 90’s film or television show leaned into negative stereotypes and absent father stories, Sisko’s story arc led through positivity.  As a widowed father tasked with raising a teenage boy into a young man aboard a space station on the front lines of an intergalactic holy war, one would think Ben Sisko would fold under pressure. In fact, he did the exact opposite. As a mentor and sole guardian of his son Jake, Ben Sisko maintained a long relationship with his son not often shown on a dramatic television series.  Aside from Malik Yoba on New York Undercover, the tally of present Black fathers on drama series in the ’90s is a shortlist. (List any others you can remember in the comments…).

Even more revolutionary for the genre was the relationship shown between three generations of Sisko men – Joseph Sisko (portrayed by Brock Roberts), Ben Sisko, and Jake Sisko (Cirroc Lofton).  In showing all the complexities of love, concern, respect, and discipline as is inherent in their southern family structure, some of the most poignant character-driven episodes featured the three Siskos enjoying that which connected them the most – blood, food, and baseball. 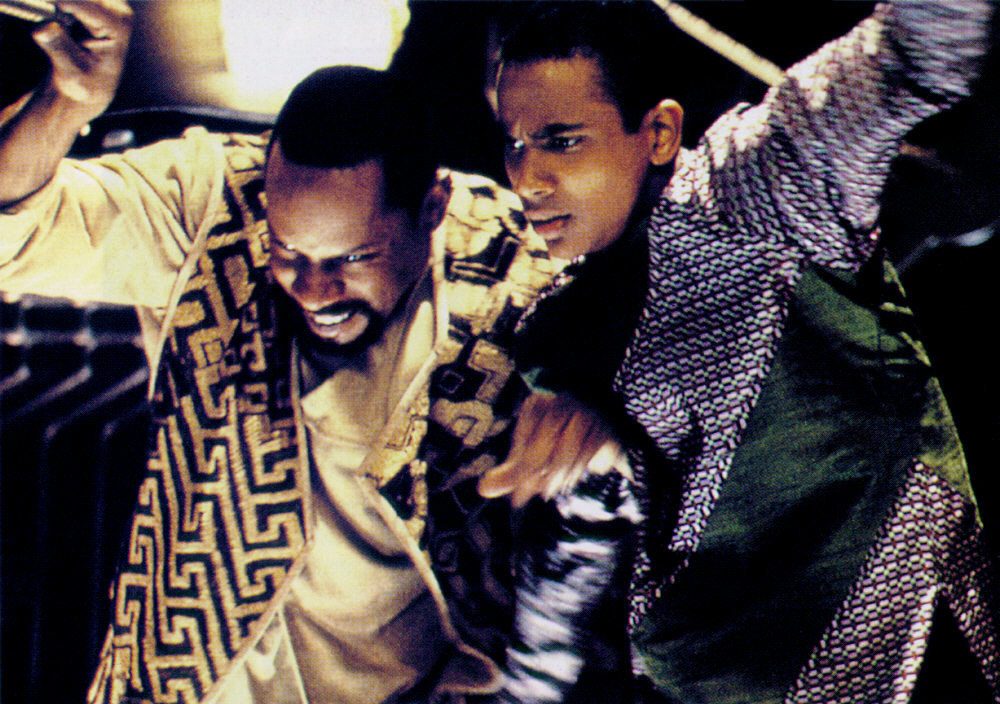 Don’t think that Benjamin Sisko’s position as the leader of a space station makes him soft or sedentary. Cap’n Sisko can let the phaser and torpedoes fly when all diplomacy fails…which is more often than not. The man is a survivor and a warrior. In the pilot episode of DS9, Sisko was introduced as part of the massive Starfleet defensive against the Borg when Jean-Luc Picard was assimilated into their collective.  Sisko survived the battle, but lost his original ship and crew.  That moment made him a force to be reckoned – just ask the Cardassians and the Dominion. They know Sisko drops bombs without a second thought. 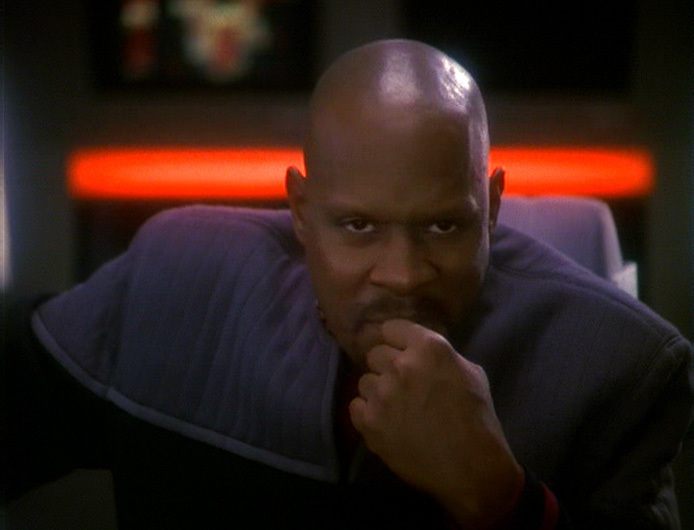 For anyone interested in revisiting the underrated and groundbreaking craftsmanship that went into the creation of Deep Space Nine, be sure to check out the documentary “What We Left Behind.” Co-directed by series showrunner Ira Steven Behr and David Zappone, the film is available on Blu-ray and Digital Formats.

Find out more at https://ds9documentary.com/

Stir up the gumbo and cue up the Second Line for Captain Benjamin Lafayette Sisko. Avery Brooks just celebrated his birthday on October 2, so a Happy Belated Reborn to the immortal O.G.