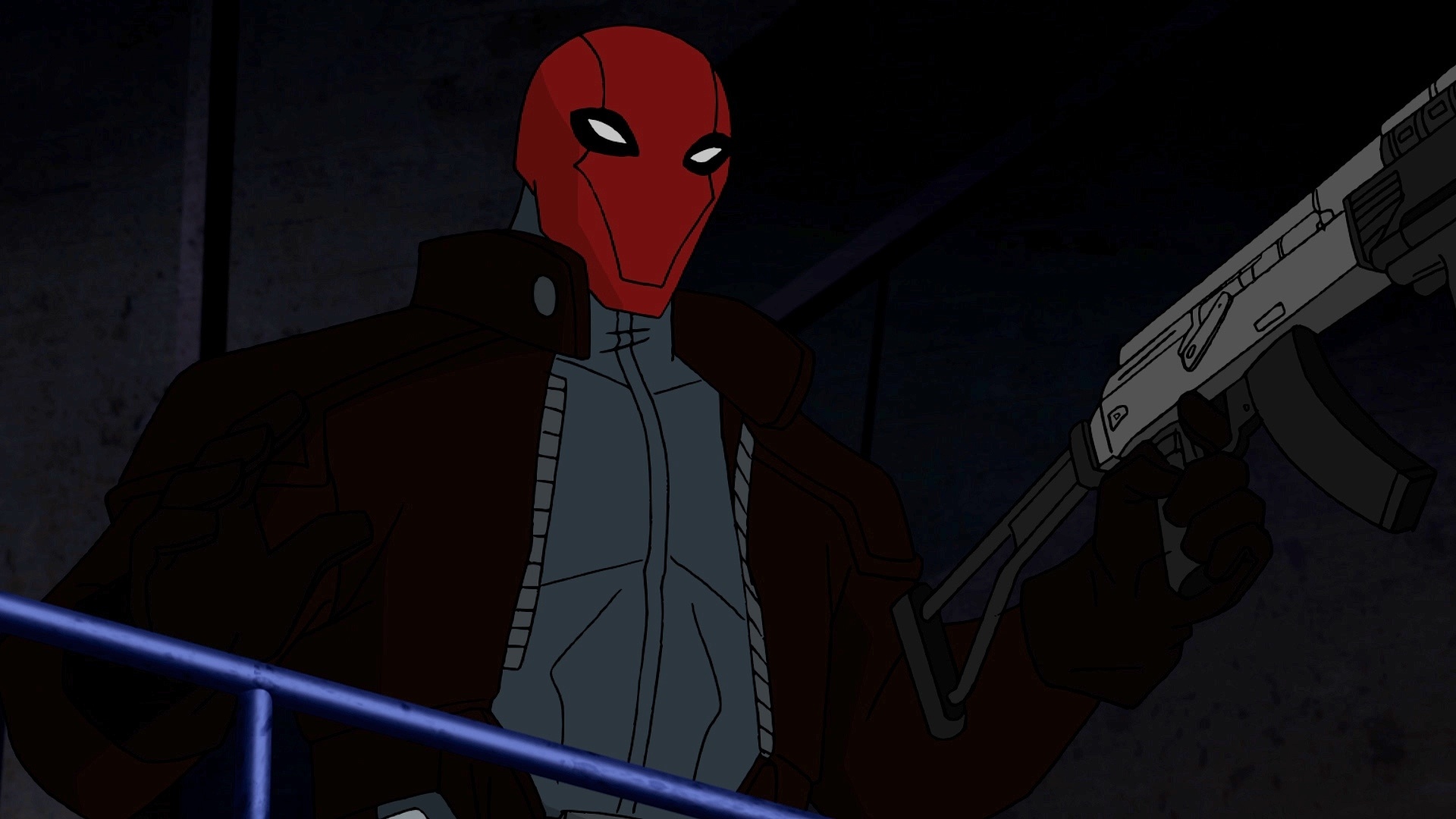 Look fam, everyone got their rituals, nah mean? Some folks like to eat a particular meal every first of the month. Some folks rearrange their furniture? Me? I watch Batman: Under the Red Hood. Aye. Month. I be scoping all these DCU animated films and for the most part, I can dig something out of all of them, but they all be fighting for second place, yo.

Red Hood is the muthafuckin’ John Boyega over the couch reaction to all Batman animated films. Please believe, this shit go prison yard hard through every phase. And I know folks love Phantasm and Return of the Joker for good reasons, but you know what those movies ain’t got? Jason. Muthafuckin. I boosted the wheels. On the Batmobile. When I was barely double digits. Todd. Which, no matter what flick you prefer, ain’t no debate. Red Hood as a character, through any DCU animated film is Top 5 Dead or Alive.

“Fuck the whole industry!
You tried to get rid of me! Y’all must be kiddin me!!”

Man, you can call this shit tradition at this point. If you run with Batman and rock the Red. Stop. Yellow. Stop. Green. Stop. Then you know you gonna have to get dead and get brought back at some point. But Jason Todd was the original, fam. And the way that shit starts? With Jason getting blown da fuck up after getting the cape beat off him with a crowbar? Sheeeeeeiiit. Not everybody get an honorable death like that. Well, all the Robins kind of do, but still.

Also, the movie improved upon the source cuz the comic book version was ehhhh. Some ol’ pick your own adventure type shit where some bitter muthafucka that must have hated their younger brother voted to have Jason killed off. Well guess what, bastards? Your boy came back with a vengeance for ayebody.

What’s worse is that he made sure to let folks know that just cuz he came back, don’t mean that something happened to him. He hit Batman with that “oh, you think Ra’s little dip in the pool turned me rabid?” Naaaaaaah fam. Jason been on that Murda Muzik. Batman kept that impulse in check, but your boy out here “No Church in the Wild” for his brand of justice. Always has been.

“Scared to death, running like I got bears on me
(Run!) My Timbs start feeling like they Nike Airs on me”

Yo, but why Jason Todd about to win American Ninja Warrior off the strength of his rooftop game do First time Batman chased him through these Gotham streets was mostly by vehicle, but when Bats and Nightwing tried to bounty hunt your boy? Fuck that. Your dude bailed on a helicopter and then went Bourne Supremacy through the skyline. Even Nightwing can’t shut the fuck up about it (played brilliantly by Neil Patrick Harris).

Jason out here turning in his 40 time at the combine, jumping out of windows, turning 180 and shooting fire extinguishers to delay his pursuers. Dude did the triple jump onto a blimp and set up in position (a fuckin’ blimp, fam!). Then he readying the pistols like it was a turn-based strategy game, just waiting on Batman to hit the corner. Not to mention him cutting cable off his ankle mid-air. Not to mention the long game he had set up with the bomb posted in the train station for his getaway. Nah man. Y’all ain’t gonna have me believing the Red Hood ain’t play all the Ninja Gaiden games.

“Yeah we got A-M-M-O, but you’ll get beat like MMA
I got Dracos, Ninos, Automatics; that’s my DNA”

Can we talk about how Jason took that Batman training and went next level with the spec ops weapon training? Can we talk about how your boy combined gadgets, hand to hand and an NRA membership? Yeah, obviously, this is what separates him from Batman, but yo, Jason ain’t develop that same fear of firearms that Bruce did. Times two, cuz your boy always carry a pair. And a blade.

Did I mention he got Batman’s arsenal too? When the Black Mask’s mercenaries showed up your boy went dual wield God mode. He out here moving like Aang if Aang carried a couple extra clips and had Quantico-level marksmanship. You see the way this dude side to side drills while never leaving his target?!?!

He out here on skates, man. He out here going Kyrie Irving on these dudes. Chow Yun-fat could never. Max Payne ain’t got enough agility perks, and Jason ain’t even got Bullet Time, yo. If your MCM can’t strafe with the left thumbstick and aim with the right like Jason, then your MCM is trash.

I ain’t even got to his fight with Batman near the end. Well, not the very end. That’s a bad example cuz I do love how they always make sure that Batman can go next level on his former apprentices when he needs to. But under the gargoyles, Jason was giving Batman all he can handle. He done disarmed your boy. Mask off like he was Miles Morales or some shit. That knife in the cape, trap? Next level. The bomb in the mask trick? He just showing off.

“With so much personality, what do you want from me?
I could be by myself and enjoy the company”

Let’s also be real, after watching so much of our beloved Batman be the stoic stalwart, having a lead character in a Batman film with this much personality is my shit. He ain’t as chatty as Nightwing (it’s part of his charm), but every time dude speaks, that shit kills. From the introduction of the Red Hood, he was out here dropping bars and one-liners wasn’t nobody else fuckin with. When he threatens the drug trade for 40%, his mouth was as lethal as the AK he was pointing. Your boy tossed the heads of each lieutenant on the table talking about, “That took me two hours. Want to see what I can get done in two hours?”

He was also the monosyllable gawd in this movie too. He watched one of his project spots get bodied? “Hmm. Cute.” He got hit half a hundred times and thrown into a building. “Ow.” And you can’t do that without the gawdbody voice acting of Jensen Ackles, who you probably know as Dean from Supernatural. Or you don’t cuz I don’t know too many Black people that watch that shit. But whatever. Point is, he murder death kills that role. Whether he’s insulting Batman, talking to himself or using some callback humor on the Joker, he out here doing the Cowl’s work.

We can’t close this part without acknowledging one of the best-delivered lines in the movie after he done set up Nightwing and Batman for the Wu. Over the train, your boy yelled that “You haven’t lost your touch, Bruce.” Flipped the game all the way upside down and left our hero shook parts one and two.

One of the most gangsta things about Red Hood is that the story flips back and forth until its climax when you see what Jason really wanted. It ain’t about him taking over the drug trade and just being a criminal. It ain’t just about being a better Batman with more permanent solutions. Ain’t even about getting revenge on the Joker for himself. Nah man, your boy Jason was on that Sinestro Corps shit. He was trying to show Batman that absolute force might be the answer. And then… after all the turns, that shit got mad sentimental.

He was mad at Batman for not doing away with the Joker and was legit hurt that he, Jason, wasn’t the last straw. “After he took me away from you…” Maaaaaan, I wasn’t ready. I wasn’t ready for that turn, yo. Jason been trying to act detached and business as usual about this shit but your boy was mad hurt that he wasn’t avenged enough. And I ain’t even mad at him, yo. 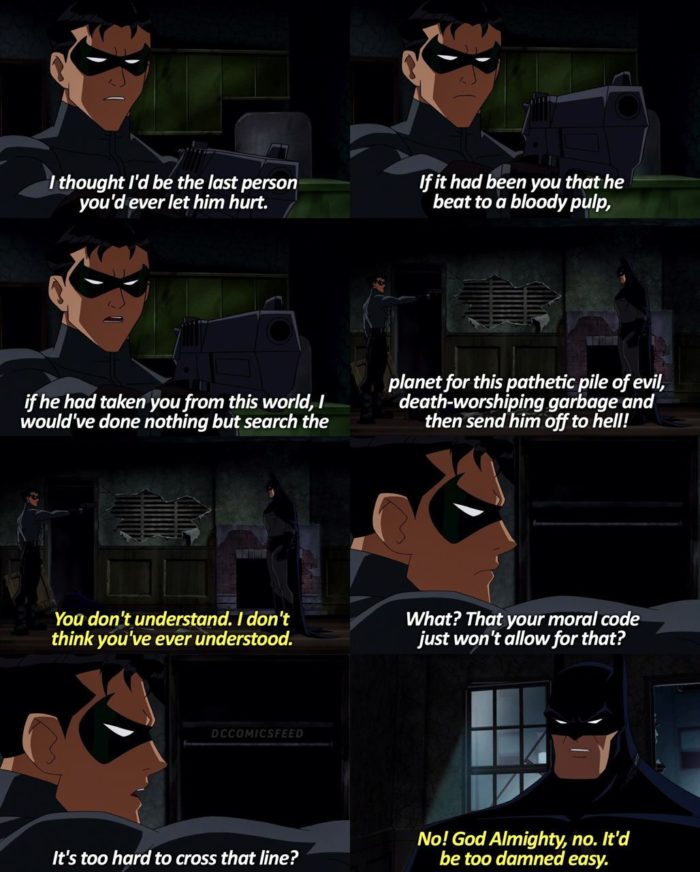 We been asking the “why” on Joker’s life for a minute now, but this shit was the most personal. And when he couldn’t turn Batman, he was like fuck it, we can all die then as he had the place wired to explode (which led to that incredible Joker shit with “I’m the only one that’s going to get what they want tonight!”).

“Everyone who doubted me is askin’ for forgiveness
If you ain’t been a part of it, at least you got to witness”

Once a month, fam. I be all up in animated Gotham, memorized lines, sculpting my mobility workouts around Jason’s flow, perfecting my one line dialogue in case anybody ever try to move in my corners. Bring your best heroes, villains, it don’t matter. Jason is what the truth looks like. Red Hoodie Up.