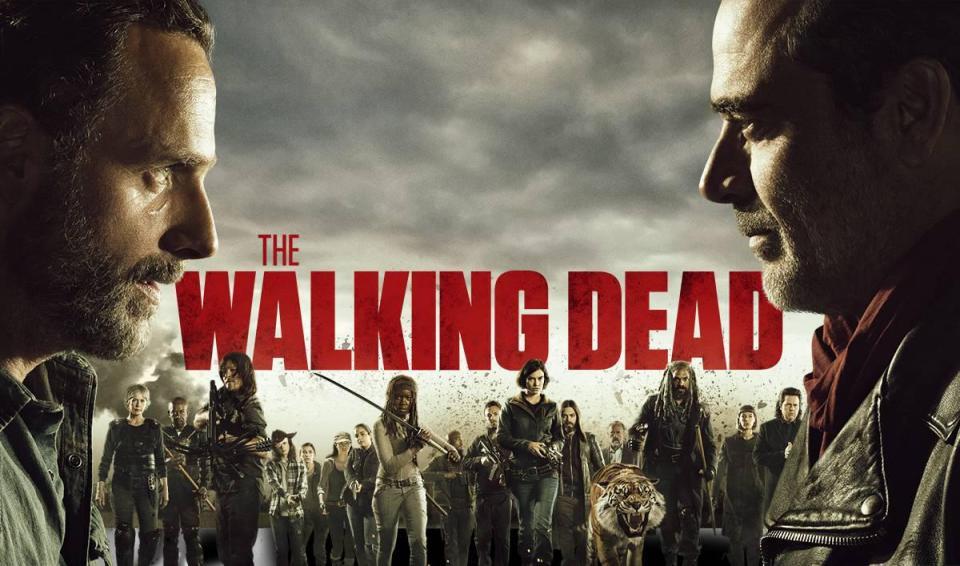 I never imagined myself as a mother. I don’t particularly like children: they’re loud and dirty and have no understanding of personal space. Overall, the idea of children seemed an unpleasant one. Fast forward to me getting a sonogram and finding out I was having twins because of course I was. Because the universe’s sense of humor is razor sharp and just as dangerous.

This dilemma—me ill-equipped, unprepared, and generally in shock about parenting—was on my mind as I watched the last two episodes of The Walking Dead because parent/teacher conferences were looming.

When I think about my children, I think a lot about how they’ve changed me and in what ways. I’m often at odds with myself: who I was tense against who I am tense against who I want to be. So, even though I’m not sure why Rick and Daryl are being presented the way they are—at odds over the ideas of right and wrong—their conflict struck me.

In some ways, it feels like an abrupt change. Rick, who scared off a person begging for food from Carl and then scolded Carl for even considering helping the man, is suddenly… softer. Maybe it’s his encounter with Morales as he and Daryl search for guns at one of the Saviour’s outposts. Maybe it’s his desire to be different than Negan. None of that is exactly convincing since Rick started the season by saying something along the lines of “I’m gonna count to 10 and then start shooting” and dude made it to 7 before he started lighting it up. He and his people went there to kill Negan and, if they are all Negan, then by the power of syllogisms, Rick went there to kill them all.

Daryl is unfettered by anything resembling Rick’s emergent conscience. He kills Morales with no problem. He kills the nameless saviour that Rick has promised he would spare if the man gave them information. Daryl is f*ckless and unbothered. Rick, based on the look he gives Daryl both of these times, feels some kinda way about that.

We are returning, once again, to a version of series’ eternal question: Who are we after we do the things we do to survive?

I was angrier before I had kids. Just in general, my baseline for anger was higher. It was in the way I walked and poured my coffee and got my mail. It was in everything. I’m not going to win the Little Miss Sunshine national pageant or anything now, but I can say I dance in my underwear a lot now. I sing offkey loudly in my car now because I have an excellent group of equally offkey backup singers. But I’m still angry. I’m still who I was, just, perhaps, better. But maybe what I think of as better is just different.

Daryl was a lowkey (this is probably a very generous way to describe it) racist like his brother Merle before the world went to hell. He was angry and alone and emotionally damaged from years of physical and mental abuse. This was not a dude you wanted to be in a committed relationship with. The walkers changed him, as did the group. He found a brother, better and more loyal than the one linked to him by blood. He found a family and it changed him. Because we see Daryl going on recruiting missions, it’s easy to forget who he was before. Who he still is. But let me say it again: I’m still angry.

But, like Daryl, my anger is most often used in the service of my family now. Rick may not approve of it but there are at least two people who aren’t Negan anymore because of it. I don’t [redacted AF] anymore, but I do take my barely contained anger and my love of my children with me to talk to their teachers and principal when I go to advocate for them and, by proxy, the other students in the class. Often, I want to yell again, to show my entire ass in these offices, but I don’t; I’m still me, but I’ve changed.

Ezekiel, too, is still Ezekiel. Even though he’s spent the entire zombie apocalypse pretending to be a different, better version of himself (which is different than Daryl who has only always been Daryl but a changing version of Daryl.)

Ezekiel became a character. He looked around around at what he had and decided to do the best he could with the tools at hand: a tiger and some community theater. He willed himself into royalty, into a leader, into King Ezekiel.

Sometimes, I look around my life and see the doctor’s appointments on the schedule, the car maintenance appointments, the children’s vitamins with fish oil (because I’m invested in brain development) and I wonder: who the fuck is this person who is juggling all of these adult parent things? Not me. I’m a poet and a nerd and I like naps and ice cream, but I found myself in the situation where I had to invent the character of parent and I did the best I could with the tools I have.

When Ezekiel tells Carol that you have to decide who you will be, it resonated. I do not know one parent who was ready–or at least I do not know one honest parent who can say and mean that they were ready. And yet, readiness often doesn’t matter. As Carol said, “I decided [who I would be]… but life decided some things, too.”

I did not choose my kids. They did not choose me. They are people in and of their own right and I am, largely, faking it. Because that is what responsibility sometimes demands from us: we Daryl up and change while simultaneously doing our Ezekiel impersonation and fake it.

And that does mean we will not revert to who were before we changed or that we will not doubt our capability. Can I do this? Should I do this? If I try to do this and fail, what is the cost? I’d be lying if I said that sometimes parenting didn’t feel exactly like this:

I’m not a parent; I’m still a screwup nerd and poet that would rather be napping and feasting on ice cream and yet I’m charged with keeping these small people alive and, more than that, ensuring that I’m not adding more assholes to the world in the process. I’m just a con artist tricking these tiny people in believing that I know what I’m doing. And hopefully, tricking myself somewhere along the way.