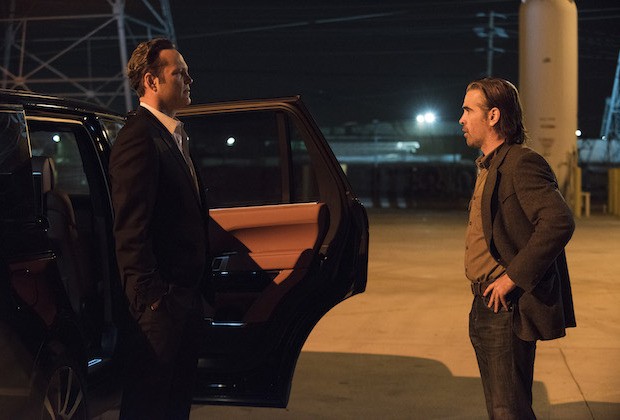 William Evans really tried. Omar Holmon even livetweeted the show every week. But they still can’t believe they watched the dumpster fire that was True Detective Season 2. Even the finale took everything ridiculous about the season and turned it up to 11. Because this served as therapy for both of them, you know they had to talk it out. ALL THE SPOILERS for True Detective.

William: Yo, I know you dropped the open letter man, I know you been down this dark ass twisted road full corny one-liners and kale dinners, but I feel like we need to talk about this True Detective Season 2 now that it’s over, fam. I hate to belabor the point, but sometimes the point need to be muthafuckin’ labored. True Detective Season 2 gotta be the most disappointing sequel since Fredo Corleone was born, man.

Omar: We live in a world where you might get bodied by a singin’ rapper or Vince Vaughn. That’s the world we live in, and this is apparently the world we deserve, Will. I felt like that scene in Rocky 4 when Apollo died and Rocky’s driving and remembering his mans and dem… except it’s me and I’m lookin’ back at season one of True Detective while “THERE’S NO EASY WAY OUT” blares out the speakers. “THERE NO SHORTCUT HOME, WILL!”

William: Bruh, wasn’t no shortcut through this gotdamn season, either. I ain’t never experienced 8 1/2 hours feeling like 20 before.

Omar: This shit was supposed to bring back the grime, man. I only know 3 people’s names and there wasn’t one memorable bar from this who show. OH — OH — DON’T EVEN GET ME STARTED ON HOW AYEBODY AND THEY MAMA watchin’ Humans and having fun talkin’ ’bout synths makin’ it clap while I’m over here livetweeting about why this woman is singing to a bar with no customers EVERY DAMN EPISODE! Why don’t True Detective Season 2 love me, Will?! Why True Detective Season 2 don’t love us, man?

William: Man, TD2 didn’t want nobody to flourish. TD2 out here patrolling the paint and blocking everybody’s enjoyment like fucking Mutumbo, man. I imagine Woody Harrelson was on a nature trail, smoking some hemp and eating berries picked fresh from a bush while watching season 2 on his phone and instantly deciding he didn’t want wifi to exist anymore.

But here’s my question, fam…

I’m a pretty smart dude. I can tell you the plot to three different Jonathan Hickman comic books off the top, right the black now, but I have no fucking clue what was going down in Season 2. I been sitting there on Sunday nights, staring at my TV the way I used to stare at White guys in high school that would show me their scars from doing crazy nonsensical shit for kicks.

Omar: Yo, all I know is somebody took some money for some land, so I don’t know if this is supposed to be a First 48 version of Parks & Rec or if Leslie Knope got the grams and guns stashed somewhere. I don’t know. I feel like the dude that won’t snitch cause I ain’t see or hear a gotdamn thing.

William: Sheeeeeeiiiit, give me some Leslie Knope, she’s more intimidating than this tall dude that always rocked black and looks like the cat who didn’t suck in Wedding Crashers. I mean, really doe, I don’t want Vince Vaughn’s career to take a hit, but I don’t want Mondays to follow the weekend either. Some shit just can’t be helped, fam. We can make jokes about how Vince Vaughn ain’t putting the paws on you, but I don’t know how Vince didn’t walk off set after seeing some of the dialogue he was required to say. That “blue balls for your heart” shit?

If my father, the dude I am named after, said that shit as a joke, I would probably smack the shit out of him on instinct before realizing I just committed suicide.

Omar: Dude, ain’t a script in the world that’ll have me believe that — no. You know what? No — hell nah, I can’t go on not knowing what the fuck was goin’ on, man. There’s just some shit I need to know so that I can get some sleep tonight and move the fuck on.

Omar: How much was that singer getting paid to sing to 3 people in a room and the 15 chairs on top of the tables?

William: I got questions, too. Was the interest in Velcoro’s character directly proportional to how much facial hair he had?

Omar: Why everybody frowning like they either just got done or were in the process of taking a shit? Or does is just smell like ass 24/7?

William: Why Frank bleed out in the desert seeing the ghost of extortion past before he hit eternity? And why when his life flashed before his eyes, he saw the bad guys from Breakin 2: Electric Boogaloo?

Omar: WHY AT SOME POINT DID NONE OF THOSE BROTHERS POINT TO FRANK’S SHOES AND SAY “WHAT ARE THOOOOSE??!!?”

William: Why did none of these actors’ agents point to the script and say “WHAT ARE THOOOOSE??!!?”

Omar: Also, if you bleeding to death, you start seeing all the cats that roasted you in your life? Is that what happens in death?!

William: Fam, also notice we this deep in this shit and we haven’t even mentioned the two other leads. I mean, I guess Ani won the season by default. Like in Little League when your team sucks, but you win because the other team had two players out with chicken pox. But the fact that they shot First Pass Gambit in the head before the finale and we ain’t mentioned that shit yet tells you all you need to know about how interesting he was.

Omar: They killed Gambit? I’m not going to lie, there were a lot of bathroom breaks and me just blacking out while watching this shit. I legit thought he wasn’t there cause he became aware of what this shit was doing to his career and just walked off set.

William: First Pass Gambit took the easy way out and died in one of the better episodes. Which is like saying Doc Octopus got beat in the best Spider-Man movie.

Omar: Man, they killed him off and I couldn’t tell if Rachel McAdams and Colin Farrel were acting sad cause he was dead or jealous wishing it had to be them.

[divider type=”space_thin”]
William: Man, I’m just going to assume that the love scene between Ani and Velcoro was actually comfort sex between McAdams and Farrell, like how folks react to a surviving a tragedy. They were like, “look, we almost didn’t survive filming this whole season, let’s not waste another moment on dumb shit.” Cause that shit makes a hell of a lot more sense than Ani and Velcoro falling for each other.

Omar: That shit was so uncomfortably gross. I kept shouting at the TV, “Hey… Hey! I’m in the room as well. Stop that… st– stop it!”

Omar: We live in a world where there’s a season two of Gotham, so I mean there is going to be a season 3 of TD. I’ma tell you right now this shit better be staring Gina Torres and fucking Rutina Wesley. Only way I’m coming back.

William: Sherlock and the 10th Doctor.

William: Before & After. Seriously though, unless they announce some Marvel superheros or Dwayne Johnson and Jason Momoa for season 3, I think I’m out.

Omar: I can’t go through that again, man. When I die I’m suspecting an angel is going to go over my time on earth and be like, “there’s this black out period for like 10 Sundays in your life… it’s just a void of nothing.”

William: Yeah, well, it’s gonna be like that for me too cause as soon as I’m done talking this shit out with you, I’m Men In Black-ing that shit from my memory. Except most of Frank’s dialogue. That shit I’m keeping stored away for the low days when I need to know that things can always get worse.

Omar: Man, I’ma tell you like the honorable Guru Laghima told me, “Mmm Mmmmm that that shit that makes you go to the void right there, tho.”