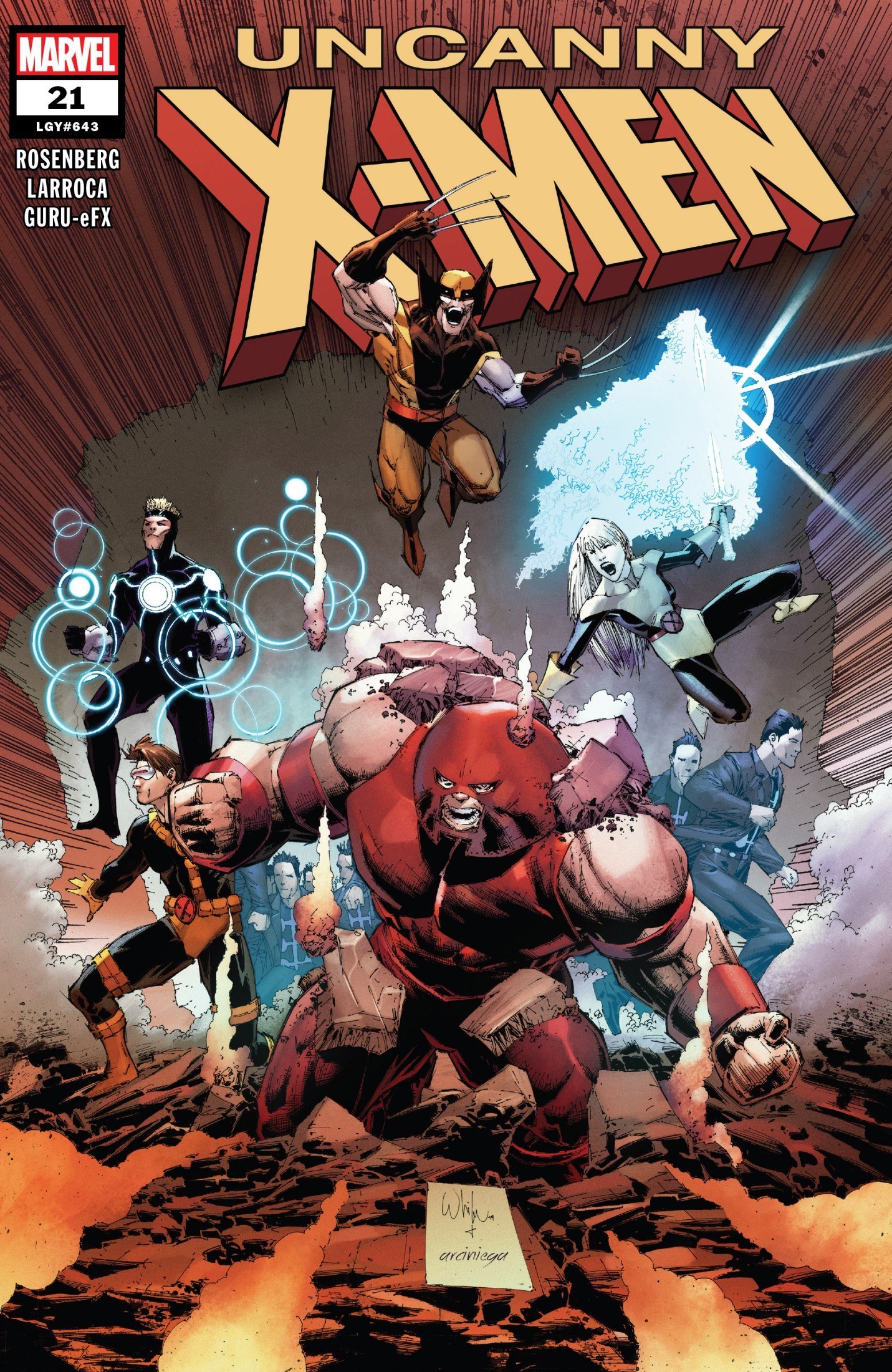 “It seems we’ve all had our backs against the wall lately.”

The end is nigh, and Hickman is on the way to bring the X back around again. With only one issue remaining in the Rosenberg/Larocca run of the relaunched Uncanny X-Men title, all of the transformations, deaths, and shifting alliances are finally coming to a head. As Emma Frost, Mr. Sinister, and Mystique join forces with the X-Men in the inevitable battle with the mutant-purging Office of National Emergency (O.N.E.), the mutants make a collective decision that changes the entire status quo for mutants worldwide.

Sometime X-Man/most of the time villain Juggernaut was the first to point out Cyclops’ glaring omission on his list – his former mistress, lover, and the current Black Queen of the Hellfire Club, Emma Frost.  As revealed in the previous two issues, Emma Frost effectively blocked any memory of herself from the X-Men while she was under the control of the O.N.E.  Although she claims she did this to protect Cyclops, Frost is always one to place her own needs above others, even her fellow mutants. Still, the Black Queen rules the chessboard, so her endgame is still anyone’s guess. When this issue opens, the X-Men are preparing to infiltrate the Hellfire Club to get some answers. Instead of a fight, however, they find Emma Frost alone and waiting for them.  Of course, they couldn’t expect to sneak up on an Omega level telepath without her knowing it first. 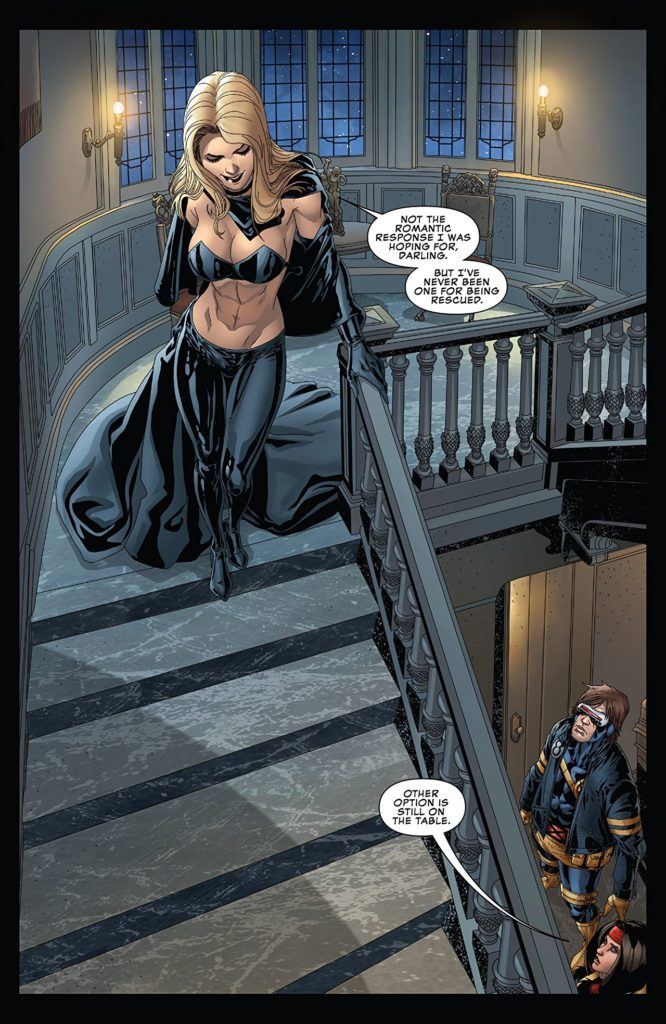 Meanwhile, the O.N.E. continues to abuse and experiment on mutants. One of their captives, X-Man affiliate and healer, Triage, is the issue’s first casualty as he is killed for refusing to work anymore. His death is not without purpose, however, as he is able to revive Wolverine in the medical ward. Always one to settle a score with bodies, Wolverine slashes his way through the O.N.E., eventually discovering another one of their Warlock-grafting experiments – the mutant Velocidad. Introduced in 2010’s Uncanny X-Men #527, Gabriel “Velocidad” Cohuelo spent time as a Morlock and as a student in the Xavier Institute. He reveals to Logan that the O.N.E. has used him to churn out their army of Warlocks.  In an act of mercy, Wolverine kills his former student to spare him further pain.

Back at the Hellfire Club, Frost telepathically transmits her plan to the the X-Men.  In order to complete the mission, she instructs them to bring back some of Hank McCoy’s serum, along with Dr. Nemesis and Fabian Cortez. Once Magick transports the X-Men back to their Harry’s Hideaway, their basement bar base, they find the place burning to cinders.  They are able to rescue those trapped inside but are immediately surrounded by O.N.E. soldiers. In the chaos, Banshee is engulfed in flames and probably going away for a long time…again. As the battle rages, General Callahan appears via broadcast to warn the team, but specifically Illyana. While captive of the O.N.E., they implanted one of the chips that eliminates mutant abilities. When Ilyana refuses to submit, Callahan triggers the device. His biggest mistake, however, was not realizing that Ilyana’s mutant abilities were the only thing keeping Ilyana’s demonic side at bay.  Unreachable and enraged, Ilyana makes quick work of Juggernaut when he tries to cross her. In one fell swoop, she rips off his protective helmet, reaches inside of him to rip and crush the source of his power – the Cyttorak crystal. She then tosses him through a portal like a balled up tissue. 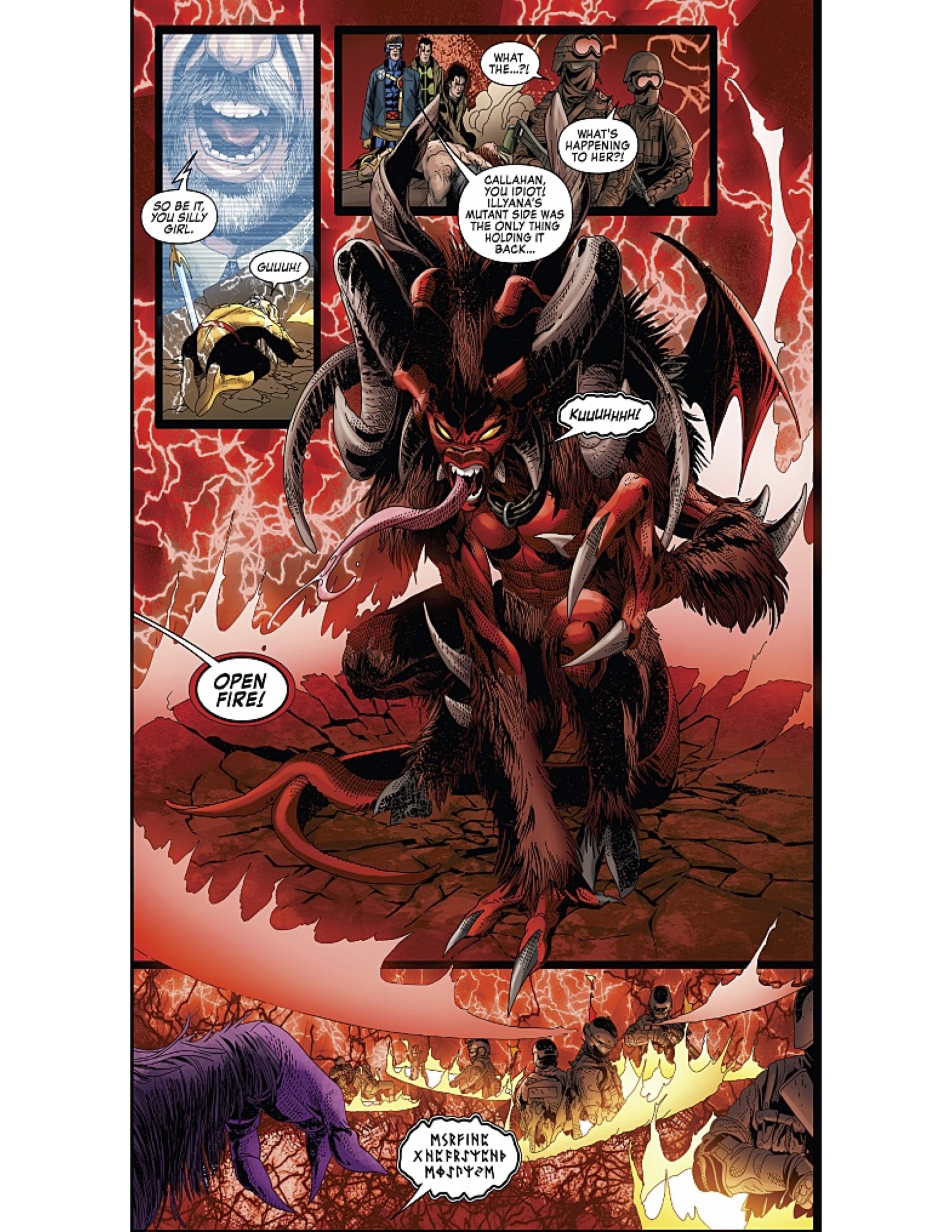 When the X-Men return to Manhattan, they create a barricade in front of the Hellfire Club as Nemesis, Cortez, Sinister, and Frost execute Emma’s plan. As the remaining X-Men do their best to hold the line, the O.N.E. suddenly stop. Why? Apparently, Emma Frost’s plan involved removing her chip and then using Cerebro to erase mutants from humanity’s collective consciousness.

If you thought the first 20 issues of the Uncanny relaunch were packed with revelations and reversals, then this issue will hit you hard.  Series regular artist Larocca returns with those classic X-Men designs and dynamic, yet clear and well-packed panels and splash pages.  The art pushes the desperation of the X-Men to the fore without shying away from the violence and stakes at hand.  As Rosenberg draws nearer to the finale on his X-Men run, only time will tell how this run fits in mutant canon as incoming writer Jonathan prepares a full-line refresh in July.