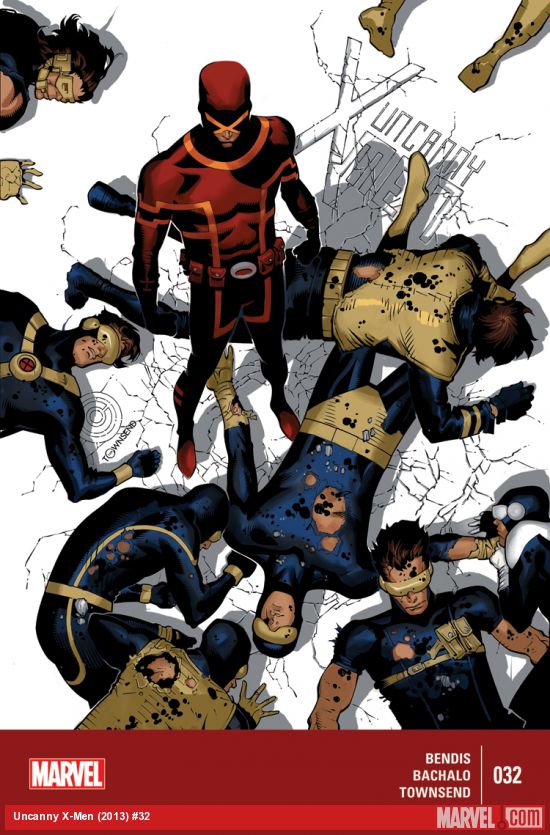 Thus far, the Black Vortex saga, another set of training wheels to get new readers into Marvel’s cosmic material, has been a decent crossover event that, while still being completely worthwhile, is currently taking up precious time from the remainder of Brian Bendis’ remaining tenure on All New X-Men. However, Uncanny seems to be pressing forward in the existing status quo, picking up where the decent yet uneven “Last Will and Testament of Charles Xavier” left off. Though it certainly had its slow points, it left things in a quite a disheveled state. This week, Cyclops’ journey continues.

Issue 32 deals mainly with Scott Summers in the process of walking away from everything while dealing with some hard truths he’d been running from. There’s not much action in this issue but the character development more than makes up for that. Bendis takes some real quality time here to bring Cyclops face to face with two elements of his life that he’d put to the side for a long while: his brother and his ex, Emma Frost. While his students always seemed a bit unsure of their fearless leader’s mental state, Emma was an interesting figure on the team because she stayed to help him despite having no real reason to stick around. Also, it’s always a fun read, seeing him dealing with an ex girlfriend that’s actually still alive that he can’t put on a pedestal.

The interactions with Havok were particularly effective and sort of emotionally resonant. In a moment when he has no one left (that could have made this book a colossal downer), it was nice to see a ray of hope coming from the one person in his life aside from Charles Xavier that has never washed their hands of him. Chris Bachalo’s artwork has really come along during his time on Uncanny. Issues like this are where he tends to shine. His action beats have a tendency to get you lost trying to find the plot progression, but his facial expressions really improved here in this exposition heavy book. The tender moments were warm while staying true to his uniquely active color palette. I don’t know where else The Redemption of Scott Summers is headed, but if the quality continues on the way it has lately, I won’t be surprised when this creative team ends it with a serious bang.

Bottom Line: An entertaining yet introspective piece of character development as Brian Bendis inches closer to his farewell to the X-Men. 8.5 out of 10