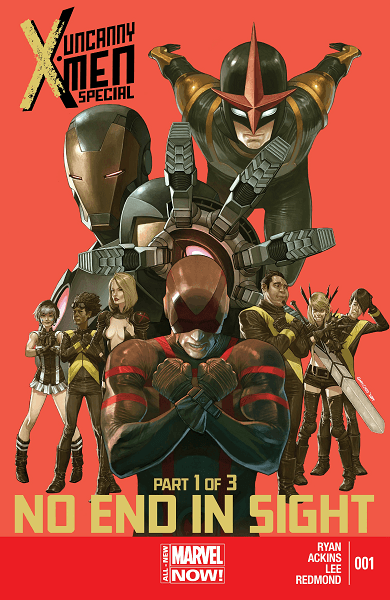 Comics that function as “specials” are always dicey. Often times, they end up being stories that function just outside of series primary plotline. Sometimes, this works out well as a nice departure for whatever tone the book has been conveying at that moment. Other times, it’s awkward. Uncanny X-Men’s special miniseries seems to spend time in both ends of the spectrum.

The book seems to focus mainly on the lesser known students of Professor Cyclops’ rebel squad, a nice break from the ongoing book that seems to put more emphasis on the more established members of the X-family. It’s just another day in Outlaw Mutant School until there’s a surprise visit from Death’s Head, everyone’s favorite smart-ass bounty hunter (and by “everyone”, I mean a person named Everyone that I’ve never met and may not actually exist because I’ve never met a Death’s Head fan in my life). It comes across a little awkward mainly because I don’t think this is something anyone asked for, but Sean Ryan seems to have a good handle on Brian Bendis’ characters. You’re not quite as punched in the face with snarky dialog the same way you would be in a Bendis book, but Ryan definitely replicates that same witty voice in more of a minimalist way. One highlight is a gut busting scene between Death’s Head and his employer where DH is trying to get paid and it’s going a whole different way than he had planned. The story is told in a very bare bones way, that, to its detriment, ends a little flat and doesn’t feel like something that is set up to be an epic narrative. Ron Ackins’ artwork comes across every bit as subtle and dry humored as Ryan’s script. Benjamin Deeds looking for the bathroom in SWORD headquarters features a particularly chuckle-inducing scene where the toilet is not what is expected. For the most part, this isn’t a bad book. You just find yourself reading it, wondering “But why?”

Bottom Line: I have no idea what kind of book this is really trying to be and I don’t know who asked for this, but it’s not bad as far as first issues go. 7.5 out 10.