After a few Russian spy bots leaked a snippet of Tom Hardy going mask-on on a helpless henchman, Sony decided to break the canister open with an official Venom trailer.

Meet Eddie Brock, the most built reporter in history who discovers a top secret project to bond humans to alien lifeforms in order to progress human evolution, because why the hell not? Brock gets attacked by one of the lab’s patients and runs home…

But someone tagged along.

Seriously, the first time the SIM-BYE-OAT called Eddie’s name and he went flying back into the wall felt like someone’s daddy who just found their report card folded up like a paper airplane. That’s gotta be Debo’s cousin voicing that creepy black goo, because he’s slamming Eddie up against a wall if he doesn’t abide by his rules of basically doing whatever “we” want to do.

Eddie bonded to the SIM-BYE-OAT, giving him super strong tentacles and a jaw full of teeth to create Venom. All those teeth look dope, but will Sony allow him to eat people on camera?

That peel-on of the mask is so… dope. You can tell they’ve been waiting to make this since Venom was just a sentence in the rumor section of the Spider-Man franchise Wiki. Speaking of which, this is a solo mission. Spidey and the rest of the Marvel crew won’t be showing up in this movie, because corporate issues. But this Venom looks way better than the 2007 version. No emo hair or pointing at random people and that’s truly a blessing. Hopefully we’ll get to see Tom Holland’s spidey stretch his legs a few times before going toe to toe with the alien linebacker the Sony Spiderverse.

No word on a supervillain yet, but it looks like whatever’s in it, a bunch of hardcore Venom fans are gonna lick their teeth when it opens on October 5.

What are your thoughts on the trailer? Are you excited about this new spinoff? Let us know in the comment section below. 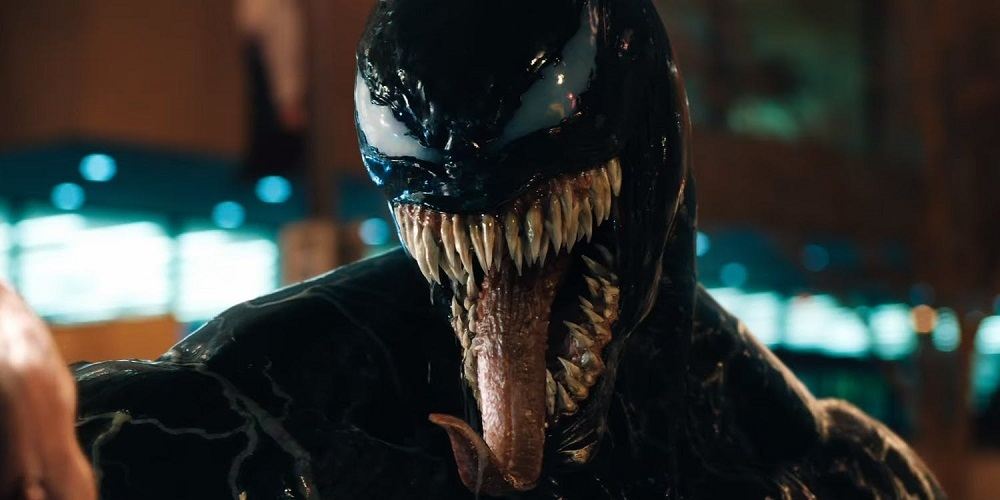