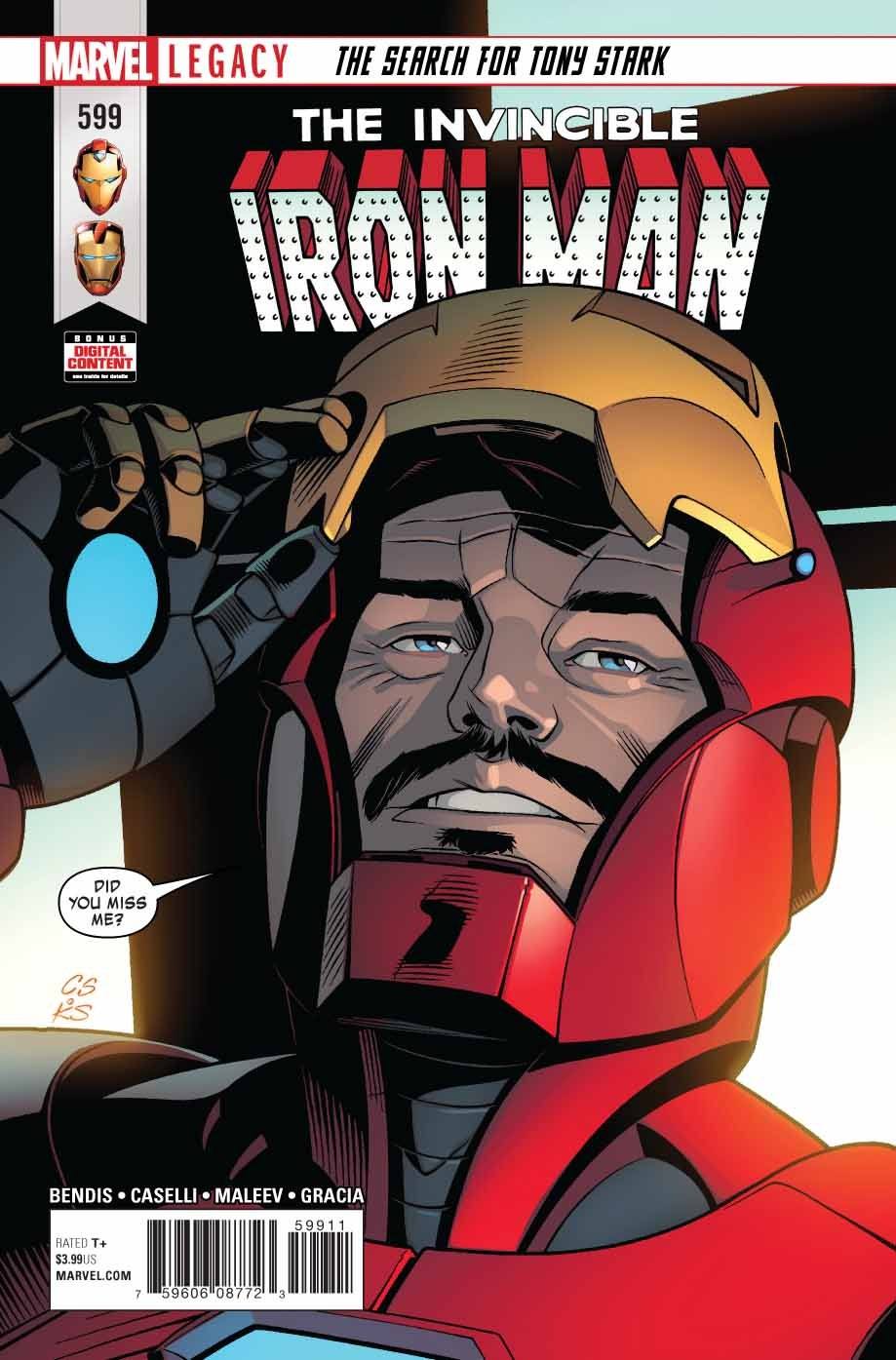 The I ndomitable Brian Michael Bendis’ time at Marvel is drawing to a close as Marvel released his second to last Invincible Iron Man comic, #599. “The Search for Tony Stark” is soon ending, as can be seen by Tony’s adorable quip on the cover. The arc focuses on Victor Von Doom and Riri Williams. Doom is redeeming himself through adopting the moniker of Iron Man. After a narrow escape from The Hood and his gang of supervillains, he’s recovering in the bed of Amara. He recently learned that she is pregnant with a little baby Doom. Riri is consorting with her new armored allies, wanting to know who has been directing and supporting their hunt for Tony. The bulk of the issue centers on Tony re-re-uniting (Ririuniting?) with his biological mother after his recent absence. It took a while, but the two adventures of Doom and Riri are starting to converge. It excited me way too much to see Alex Maleev drawing Eric Lynch, board member of Stark Enterprises.

This book does two out of three things perfectly. The art of Alex Maleev and Stephano Caselli is incredible. Meleev’s style is instantly recognizable and dazzling. Especially being an avid fan of his Daredevil, it’s a blessing from the comic gods to watch him team up with Bendis telling Doom’s story. It takes talent to share a book with a heavy hitter like Maleev. Luckily, Caselli’s pages exude talent. Even with a traditional comic style, the crisp and clean work Caselli does with faces and armor shines.

The second strength of this book is obviously Bendis’ dialogue. In this book, his ability to weave humor into a serious discourse without losing emotional weight is showcased. You get a touch of it during Doom’s conversation with Amara and more throughout Stark’s back and forth with his mother. Another thing done well in this book is the use of the recap page. There is a touch of meta-analysis in the page with Riri wondering who the mysterious benefactor of the Stark-Search is. Nowhere near as heavy as a Deadpool comic, it is still at a perfect level where you’re pretty sure she doesn’t know she’s in a comic book. All credit due, it’s a clever and entertaining way to recap.

The sole criticism I have would be the wonkiness of the story. I was (and still am) critical of the retcon with Tony Stark’s biological parents. I made peace, especially after a couple issues of Invincible Iron Man laying out the parents’ background story that were phenomenal. It seems like Bendis wants to leave with a bang, drawing up some kind of game changing twist. There were two of these eye roll-inducing plot twists. But nippicking aside, this book continues to be a pleasure to read and sets up for a potentially exciting finale to the Bendis era of Iron Man and the rest of Marvels